‘American Son’ Paints In Broad Strokes Of Black And White 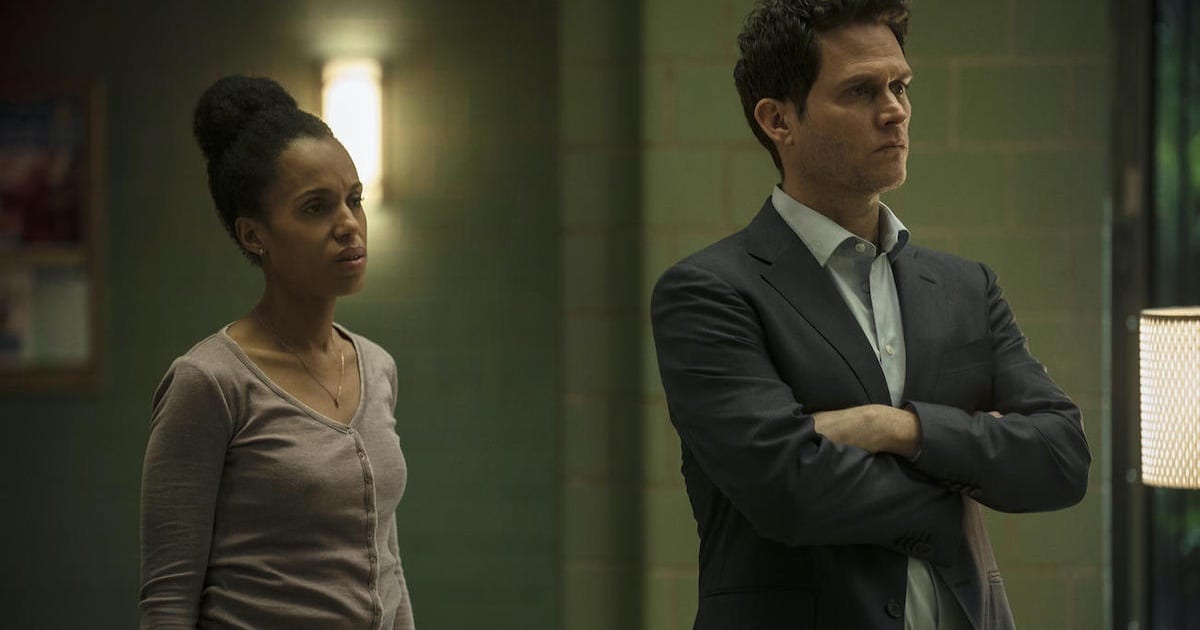 American Son is listed by Netflix as a “Television Event” which feels like a pre-emptive defense about its un-cinematic look. Adapted from writer Christopher Demos-Brown‘s own play, the film takes place entirely within a Miami police station with only four actors who all convene to discuss and attempt to solve the disappearance of a missing teenager. It’s very clearly adapted from the stage. That isn’t necessarily a bad thing, however. 12 Angry Men and Death and the Maiden are two easy examples that show that a good script and game performances are just as cinematic as exploding cars or two-hundred-foot tall lizards. But the makers of such a film need to REALLY be on their game to pull off such a daunting task. The cast, Kerry Washington in particular, does its best but is hamstrung by the dialogue written by Demos-Brown.

American Son has a problem from the start in that it never feels like it was attempted as a story with a beginning, middle, and end, or any derivation of such a structure. It feels like a lecture on race relations delivered by characters based on generic archetypes. This leads to speeches that kick the viewer’s suspension of disbelief into the long grass. Admittedly, I’m not American but the “gold teeth” line in the trailer? That’s the first of many “Ohhh, come on”  lines deployed throughout the movie.

Frustratingly, the film isn’t constantly that bad. But after every ten minutes of skillful back and forth you get a moment like the one where Scott (Steven Pasquale), a man who was married to a black woman for decades and has a biracial son, uses the word “uppity” to describe a black kid’s behavior. To his ex-wife. Did you feel that cringe just then? …Yeeeaah, and that’s not the last time that line clunks into place.

Officer Larkin (Jeremy Jordan), in particular, is a stand-in for the “clueless cop” archetype that we’ve all seen way too many times at this point. Trying to ingratiate yourself to someone who mentioned Emily Dickinson by mistakenly quoting Charles Dickens is something no real person has ever done but here in this film. Larkin is also continually making assumptions that, as a viewer with the same information, you immediately know are wrong and you have to wait for his realization to come about. Instead of the movie being ahead of the viewer, it is quite the opposite.

The saving grace comes in the form of Kerry Washington and Steven Pasquale’s performances. I’ve long thought that if we’re going to have awards for acting (and I really think we shouldn’t, but that’s a conversation for another time) that they should be graded for the difficulty in the same way diving or gymnastics is. Nearly every Oscar winner was in a critically acclaimed movie. It’s easier to deliver a good performance with a great script and director. If you can draw a good performance out while giving a speech that bears no resemblance to normal human emotions, that should deserve more praise. Washington, in particular, has a LOT of heavy lifting to do and manages it quite well most of the time. Not all of the time, granted, but no one on Earth could pull off a speech about being so scared for their grown son that they get up in the middle of the night nearly every night to check on them. There are parents in Syria less stressed than she claims to be.

Selling themselves as a long-time married couple requires all of Washington and Pasquale’s abilities and, again, it largely works, but they are given some insurmountably unlikely conversations to handle. Some lines are pure exposition. Of course, he or she remembers the baby names they discussed, they were the ones who discussed it! But okay, fine, have them say it out loud so the audience gets the message that there were black/white disagreements along the way. There is possibly another film where the focus was the relationship of a mixed-race couple in 2019 starring Washington and Pasquale that would have been less didactic. Focusing on them rather than the police aspect might have been more intriguing. With the characters being used as they are it becomes very, very difficult to believe that these two characters were a good match for a very long time.

As an acting showcase, American Son is top-notch. As a discussion on racial issues in America, your mileage may vary. As a movie, it’s a filmed play in need of some other writers to bounce the ideas off and lose the bad ones.

Thank you for reading! What are your thoughts on American Son? Comment down below!