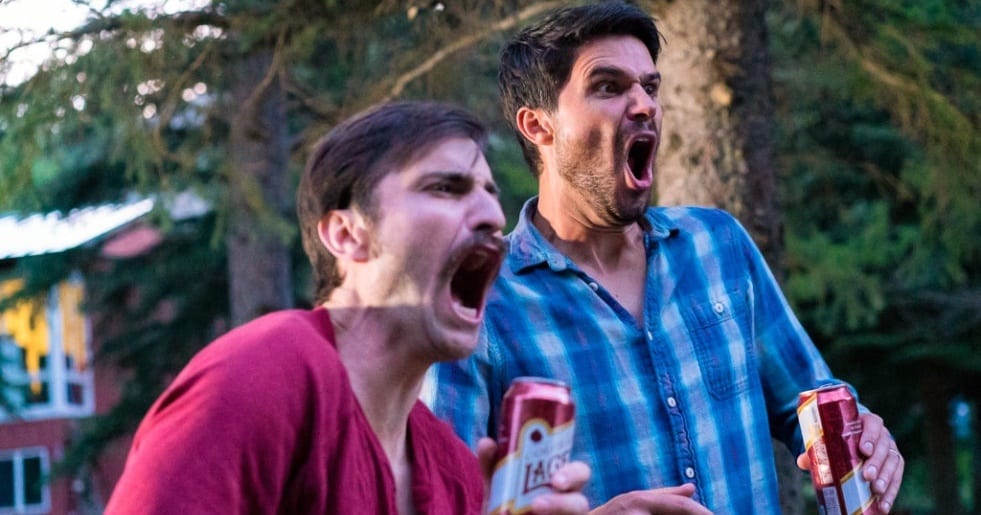 Most of us have had this happen. You see an impressive trailer or hear people rave about how good a movie is. You have to see this movie! More often than not, when you finally do, you are underwhelmed. It’s not bad, it’s not good, it’s just… a movie. Well, good people, I had the opposite experience with director Nate James Bakke’s Man Camp. It was a movie I had never heard of, and it was a great time!

Man Camp is a slapstick comedy about three brothers who take an annual trip to honor their late father. The brothers are thrown for a loop during one such trip when they find out their mother is seeing someone. Having heard nothing else about it, I went in with zero expectations. That was quite refreshing, in an era where everyone seems to form an opinion about a movie before having seen it. (I’m looking at you, toxic fandoms!)

Man Camp is downright goofy (at times absurd), and takes a few predictable turns. Yet, somehow, it all works. And works well. This is the type of movie that will likely grow in popularity, and eventually, have quite a fanbase (as will the actors). Mark my words.

The Men of the Camp

This is not a big-budget action movie, nor a period epic with sweeping visuals. Rather, this is the type of movie that really lives or dies by the performances. There is no hiding bad work in a movie such as this. Thankfully, this also means good work can be seen. There are only a handful of characters, so each actor shoulders more responsibility than they would in a massive cast.

Speaking of extra responsibilities, two of the film’s stars, Daniel Cummings (who plays Adam, the “straight-laced” brother) and Scott Kruse (as Tim, the most over-the-top brother) are also listed among the writers and producers. Now, I tend to get nervous when I see the same name keep popping up in the credits. In my experience, this spells disaster more often than not. With independent films, naturally, it is a bit more common. Thankfully, it was a good thing here. I think it made for a more natural script and a more comfortable set. No one looked like they were having a bad time.

Among the main cast, Pete Gardner had the most familiar face. Gardner is a fairly prolific character actor in movies, and is also apparently a series regular on Crazy Ex-Girlfriend (thanks, IMDb). I had also seen the aforementioned Kruse in several memorable commercials, such as one for Credit Karma, where his character is hugged by a Sumo wrestler in the middle of a therapy session. Everyone else in Man Camp was completely new to me, but I will definitely look for them in other things now.

The rapport among the three brothers (which also includes Erik Stocklin as Kevin) is fantastic. They play off of each other as real brothers do. They do things to annoy each other, and you get a sense that there are plenty of inside jokes among them. It’s a nice dynamic. Adding Gardner to the mix as prospective stepfather Alan really cranks Man Camp another notch. These four men are perfectly cast.

I really enjoyed the three ladies of this cast, as well. Tammy Kaitz, who plays Theresa, the mother to our trio of Mann (yes, that’s their last name) brothers, looked quite familiar to me. As it turns out, this was my first time seeing her in anything. I think this is a testament to her performance. She feels like someone you already know. And her chemistry with the rest of the cast is fantastic. She’s natural, yet funny, and has a depth to her not normally seen in these types of comedies. I really enjoyed the character.

Also fun was Anna Rubley, as elder brother Adam’s wife, Katie. In her first scene, she is giving off a very strong Joan Cusack vibe that I can’t quite put my finger on. Because of this, I instantly wanted to see more of her. Unfortunately, we don’t get too much more of her, other than her being mentioned in a running gag where everyone Adam encounters goes on about how hot his wife is. Oh, and as the co-star of youngest brother Kevin’s hilarious Dungeons & Dragons/The Lord of the Rings-inspired dream (which implies he also fancies her). Katie deserved more time, but, given she shuts down some stereotypes about women early on, I’ll let it slide.

Arguably the most fun of the three is Raleigh Cain as Christy Borders, a frenemy of sorts for middle brother Tim (Kruse). His interactions with her are quite hilarious in their immaturity. It’s a very third grade “she’s gross” type of reaction, but it’s fairly evident he has feelings for her. Christy clearly likes Tim, as well, and is playing along with this childish dynamic. It’s an entertaining back-and-forth. Tim’s fantasy about her, that turns into way too much reality for him, is the best part of the entire Christy/Tim saga. It’s priceless.

Nitpicks as I Exit

I have to call the following nitpicks, rather than “things I didn’t like,” because nothing is really all that serious. There are times where the story becomes predictable because we’ve seen it play out before in other movies. There is a story structure that the vast majority of comedies use, and this one is no exception. This includes an ending that veers dangerously close to cheesy territory. Even with that said, there are still unique aspects that save Man Camp. Subtle twists that keep it from becoming too predictable. A joke that goes somewhere you didn’t quite expect. A visual that is funny enough to distract you. And that is where the magic of this film lies.

Man Camp has the potential to catch on and be a thing, like a bro version of Lady Bird, with a touch of The Hangover. I look forward to the buzz.

This review is part of our coverage of the Denver Film Festival.

Thank you for reading! What are your thoughts on Man Camp? Comment down below!