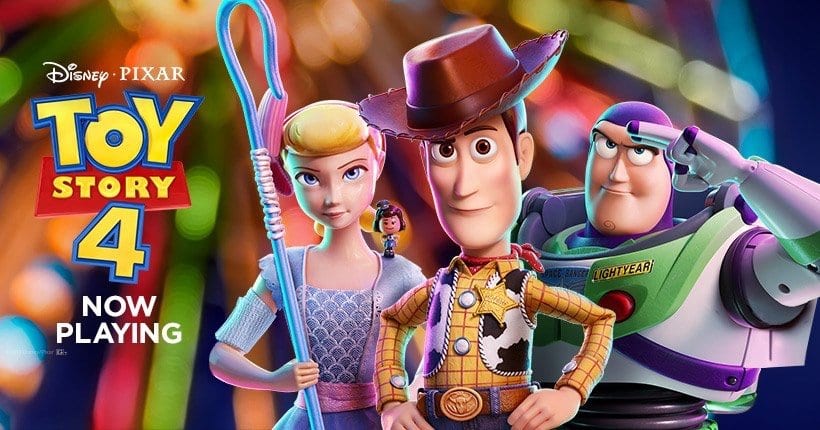 Toy Story 4 — the sequel we didn’t need but everyone asked for. And here we are, kicking off the summer with what people have joked would never come to fruition for a decade. Look, I’m not against the idea of a fourth Toy Story movie. Pixar gave us some entertaining shorts and two television specials that proved they could take the characters in interesting directions. But the third movie ended on such a perfect note that continuing the main story further seems superfluous. Sure, the addition of Keegan-Michael Key and Jordan Peele to the cast was promising. And it offered an answer to what happened to Bo Peep between Toy Stories 2 and 3. But there was always the risk that a new entry could spoil everything that came before it. Does it, though? Let’s find out.

Woody (Hanks), Buzz (Allen) and the gang are now the proud toys of a little girl named Bonnie. Woody tags along on her first day of kindergarten and inspires her to create “Forky” (Hale), an arts and crafts Frankenstein. But Forky doesn’t believe he’s a toy and runs away while on a road trip. As the toys mount a search and rescue, Woody runs into his old flame, Bo Peep (Potts), who is now living off the grid as a lost toy. Torn between loyalty to his owner and his growing attraction to Bo and her lifestyle, Woody must decide where his true purpose lies.

Toy Story 4 introduces a bunch of new toys to the cast and they are an absolute treat. I expected Forky to get on my nerves. But he overcomes his “trashy” impulses fairly quickly when he learns what a toy’s purpose is. His unique way of seeing the world will get some laughs and even make you think a little.

Key and Peele play a pair of confrontational carnival prizes stuck together like a chain gang. They don’t add much to the story other than some comic relief. Their running gag surrounding “the plush rush” is indeed hilarious, though. There’s also Officer Giggle (Ally Maki), a Polly Pocket-style police doll that can be best described as Bo’s Jiminy Cricket. But by far the best of the newcomers is Keanu Reeves’ Duke Caboom, a Canadian stuntman modeled after Evil Kinevil. He’s cheeky, melodramatic, plays an integral part in Forky’s rescue, and yes, he does say “Woah” at one point. You’re welcome.

Finally, there’s the main antagonist, Gabby Gabby (Hendricks), a doll who rules over an antique store like Lotso from Toy Story 3. Her reasons for keeping Forky and Woody apart are wicked at first glance, but as the film progresses she becomes one of the most nuanced and sympathetic characters. Hendricks’ heartbreaking performance is part of what sells it. Her intentions are good despite her going about them the wrong way, and a chance at redemption isn’t out of the question. It’s refreshing to not have another animated twist villain or one who’s so obviously irredeemably evil.

Bo is Back and Even Better

One of Toy Story 4’s biggest draws is the return and total makeover of Bo Peep. In the first two films, she had little character beyond Woody’s love interest. Then she vanished before the third movie with little explanation as to why. The prologue fills in that gap while also showing why Woody and Bo have such a great dynamic.

Bo has become a wandering nomad who helps forgotten toys get played with. She’s evolved into an action girl who knows her way around the big world and always has a plan. What I like is upon her reunion with Woody she doesn’t just fall into his arms and become the passive damsel of Andy’s games again. Now it’s Woody’s turn to keep up with her, and he enjoys the challenge as much as I did.

Annie Potts is one of the most under-appreciated comediennes of our time. We all remember her dry turn as Jeanine in the original Ghostbusters films, but she manages to make every character she plays her own. She gets to flex her vocal acting chops here much more than in any of the previous movies. It’s a joy to hear her play off of Tom Hanks and Keanu Reeves without missing a beat. I hope Ms. Potts will continue to do more voice acting roles from here.

Seeing how this is Pixar, the animation is top-notch. Comparisons between this and the first film and how far CGI has advanced are inevitable, but that’s not what I’m here to discuss. The trailers for Toy Story 4 made it look like it’d be a retread of Toy Story 2. Thankfully, that’s not the case. There are some surface similarities, but it’s an entirely new plot. Any concerns about recycling from the previous films are dealt with thanks to its potent different themes (see below).

It’s wonderful to have the familiar cast back. They even manage to recycle some of the late Don Rickles’ dialogue so his Mr. Potato Head could still have a part in it. As great as it is to see these characters again, there is a downside. Because the focus is largely on Woody this time around, we don’t get as much time with the other toys as we’d like. They spend most of the film waiting for Buzz and Woody to return. They don’t get to affect the plot in a significant way until the third act.

This is also the first Toy Story to not have Buzz revert back to his hilarious delusional spaceman mode. I miss it, but I understand how they could have run out of creative ways to keep returning to it by now. Instead, we have a running gag where Buzz listens to his “inner voice” by following the convenient advice of his catchphrase-spouting buttons. Though it got some chuckles, it did make Buzz seem a bit dumbed down from the previous films.

Mature Themes of Identity and Moving On

Almost every Pixar movie smartly incorporates deeper themes that enrich the experience. Toy Story 4 is no exception. Continuing the saga’s motifs of adapting to and accepting change, this movie posts the question of how far is too far when you’d do anything to cling to an outmoded purpose your whole life is based on.

Both Forky and Woody are undergoing a crisis of identity tied to their function in life. They have outlived their purpose, but are singleminded in pursuing it regardless. Forky believes he belongs in the trash, and Woody wants to make Bonnie as happy as he did Andy, even if it means manipulating her playtime to his preferred outcome. Because he knows how much Forky means to Bonnie, he places far too much concern in their well-being over his. It results in some painful consequences that the movie bravely doesn’t fix at the last second.

As is the case with the Toy Story movies, friendship is at the forefront. Woody cares too much about them that he doesn’t want to risk their lives. But by the end, he learns an important lesson that friends can help alleviate the responsibilities you burden yourself with. To elaborate further would spoil the movie. I’ll just say that the ending is a perfect resolution to these themes and Woody’s journey from the first movie. It does just a good a job as Toy Story 3 did when it comes to teaching about letting go (if not better). I’m happy to say that, for all its flaws, Toy Story 4 belongs on the shelf next to its predecessors. It may not have the gravitas of Toy Story 3, but it’s far more fun to watch. The plot isn’t as tight as the first two films, but it leaves just as big an emotional impact. It won me over. While everyone has made a big deal about this being the final Toy Story movie, the ending leaves plenty of room for more adventures. Here’s hoping we won’t have to wait another ten years for Toy Story 5! 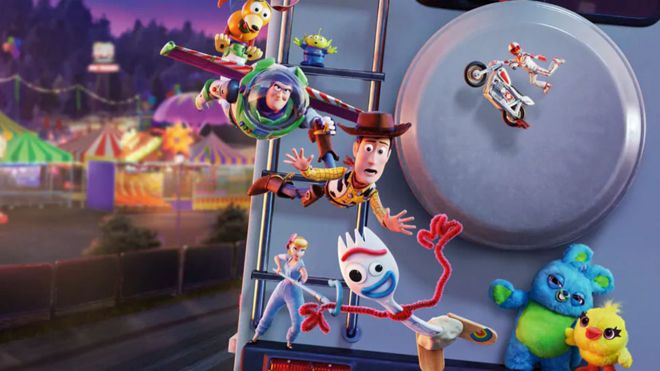 Thanks for reading!  What are your thoughts on Toy Story 4?  Comment down below!

[…] so much so that it effectively changed how studios cast animated movies. Although movies like Toy Story came before it, Shrek effectively popularized getting as much A-list talent as possible for voice […]

Great review – neatly touches on the various themes explored in Toy Story 4. Big fan of the first two movies – not so much the third – but This one serves as a fitting coda for this quartet of Pixar films ! And the Animation is Top Notch – so much detail & depth. ( the ‘Bensons’ creeped me out though! )

My son and I loved this movie.

I did like the film overall and cried at the beginning bit, but either this or Toy Story 2 is my least favorite of the tetralogy.

I didn’t really like Bo Peep’s “badass” character change and wish she was like she was in the first two films. And the ending, though sad, just made me question lessons that Woody supposedly learnt in Toy Story 2.

And I think everyone’s way too forgiving and merciful to Gabby Gabby, lol! She’s way too manipulative to not have some form of paying for what she’s done happen to her.

But yeah, Duke Caboom was the best!