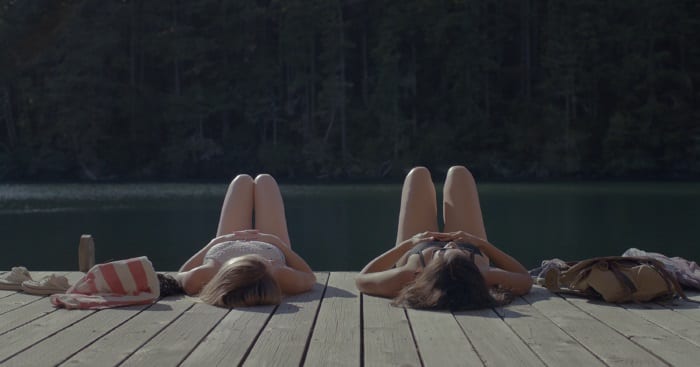 Clementine follows Karen (Otmara Marrero) in the wake of a falling out with her much older girlfriend “D” (Sonya Walger). While it’s not shown on camera, their relationship is clearly less than ideal. “D” seems very controlling of Karen, often treating her like the much younger person she is and playing mind games. Distraught, Karen makes her way to “D”‘s lake house in the Pacific Northwest to get away from the toxicity.

Her sanctuary is short-lived, however, as she quickly runs into a much younger girl named Lana (Sydney Sweeney) with femme fatale-like qualities. It’s almost impossible for Karen to get a clear sense of her motives, but Karen is drawn to her anyway. Romantic tension builds quickly. And yet, you feel as if the other shoe is about to drop at all times.

Karen is always weighed down by her relationship with D. She seems to be operating at a constant 50%. Slightly tired, always in a depressive state. Meanwhile, her relationship with Lana becomes more curious by the second as she wonders whether or not she can trust a single thing Lana says. Things are very complicated for these characters. As they should be.

Luckily, we’ve seen an uptick in the amount of LGBTQ stories told in film over the last decade. You know the typical format: two people meet, an attraction builds, and some form of oppression threatens to tear them apart. In most cases, those films lead to one of two options: the couple ends up together, happy as can be, or must tragically go their separate ways. Many of those movies are great, but rarely do we see films show destructive LGBTQ relationships. Instead of attempting to validate LGBTQ relationships, Lara Jean Gallagher starts Clementine by normalizing their existence and then allows them to be just as messy and flawed as other onscreen romances. Clementine seems like a transition point for LGBTQ cinema, one that may bring plenty of intriguingly flawed characters and situations.

Taking from her own experiences, Lara Jean Gallagher uses these uneasy relationships to look at the cyclical nature of psychological abuse in relationships, especially in those where a noticeable age gap exists. There’s always an aspect of young people looking up to older people, which can have disastrous results if the older individual doesn’t realize the effect they have on someone. Or, it can lead to plain dumb decisions. (You can be sure, watching Clementine in the wake of Elon Musk and Grimes, two people with a 16-year age difference, naming their child X Æ A-12 hits a little different.)

Granted, this idea doesn’t always take hold visually; despite being 8 years apart, Otmara Marrero and Sydney Sweeney look very close in age, mostly because Sweeney is clearly an actress in her 20s trying to act like a teenager. But each performance is very strong nonetheless. With the “D” character acting mostly as an offscreen presence, Otmara Marrero and Sydney Sweeney are the ones carrying the film. Marrero has an old soul mentality to her that tracks nicely, whereas Sweeney carries herself strongly as a slightly ditzy, more enthusiastic person. Sweeney is especially spellbinding: she may be a little too old for the part, but she’s flawless in delivering dually-coded dialogue. Rarely do you ever have a clear idea of what she’s thinking.

The naturalistic performances and Katy Jarzebowski’s unsettling score lead the way in Clementine. The film has a pervading sense of feeling “off” thanks to both. I get the sense trouble is lurking all around these characters, whether its internal or external. Despite this, Clementine struggles to leave a strong impact. More often than not, it’s functional, not remarkable.

Much of it comes from the film confusing general depression with personality traits; outside of her relationships with other people, it’s difficult to lock down Karen as a character. She’s been through a lot, though she’s more or less a blank slate, and not because Clementine is purposely perplexing; personally, I just don’t see a lot of there there. The film falls into the issue of surrounding the main character with supporting characters who are far more interesting — I’d rather spend more time with Lana or even “D” than Karen.

Then again, Lara Jean Gallagher shows a lot of talent in many other aspects. The pacing and tone are very strong, and Gallagher doesn’t intrude on the intimate story with unnecessarily flashy directing tricks. Everything is very precise, which has me interested in what she does next. Much like Tayarisha Poe’s Selah and the Spades, Clementine is a perfectly solid debut, but what’s coming next for Gallagher has me very intrigued.

Thank you for reading! What are your thoughts on Clementine? Comment down below!