Freddy vs. Freddy: How the ‘A Nightmare on Elm Street’ Remake (2010) Stacks Up to the Original

written by Patricia Henderson May 2, 2020 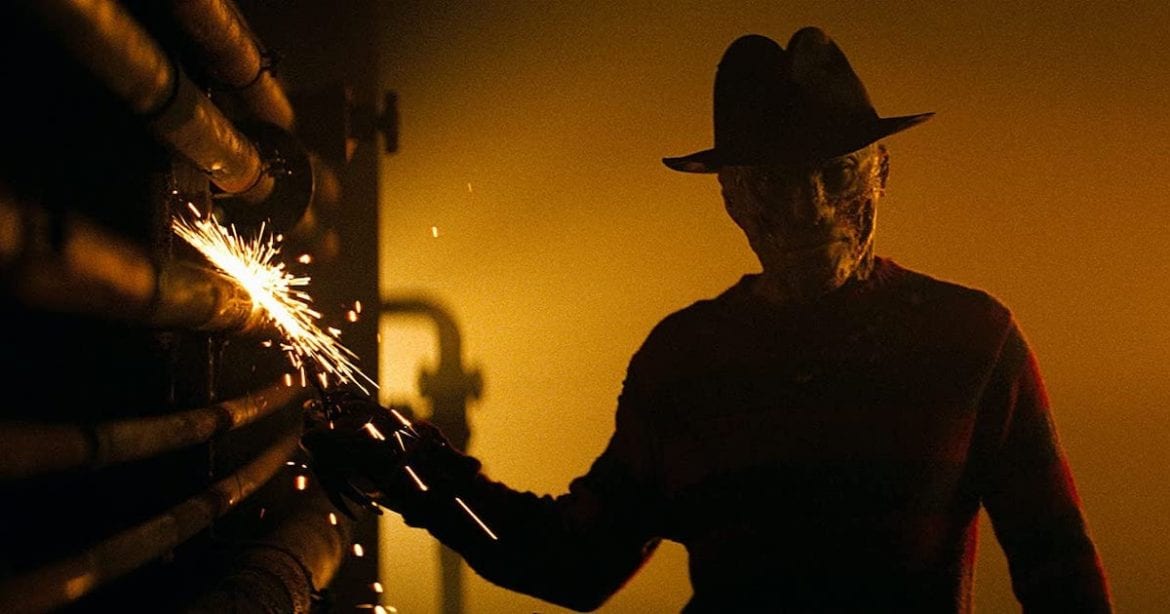 On April 30, 2010, a remake of the classic 1984 horror film, A Nightmare on Elm Street was released. Many, including me, asked the burning question: “Why?” How could you tackle something so iconic, and why even try?

For this ever so momentous anniversary, I sat down to compare the remake to it’s beloved predecessor, point by point. In a piece like this, naturally, there are spoilers all over the place. Just to forewarn you.

I found this video on YouTube, containing both trailers, which makes my job easier. In my opinion, the trailer for the first film (1984) gave too much away, including spoiling some of the bigger kills (namely Tina and Glen). The 2010 trailer was more careful in that regard, but was also a bit dull.

The winner is: 1984, because it’s more interesting. The original trailer makes you want to see the movie, which is a trailer’s job, after all. I do wish they’d been more subtle, though. For instance, one could assume Glen being pulled through the bed was part of a dream sequence. However, the inclusion of the “I’m your boyfriend now” line kind of blows that. At least they resisted the urge to include the blood flood.

In the 1984 film, Nancy’s mom tells her Freddy Krueger was a child killer. He was released on a technicality, so some of the neighborhood parents got together and burned him to death. Nancy’s mom so happens to keep one of Freddy’s blade-equipped gloves in the basement, which she presents as proof (more so for the audience than Nancy). One can infer Krueger was also a pedophile, but it isn’t stated outright. It was in early versions of the screenplay, however.

In the 2010 film, we’re actually shown Krueger’s death. Quentin (Kyle Gallner) comes close to drowning, and sees it all happen while he’s unconscious. This time, Freddy is a child molester, not a murderer. The parents in town hunt him down after their children (our leads when they were little) tell what happened to them. The parents light a warehouse Krueger is hiding in on fire, with the goal of forcing him out. Instead, it explodes, and Freddy runs out, fully engulfed in flames. At this point, Quentin is revived by his swim coach, so the flashback stops.

Seeing this happen makes Quentin question whether Krueger was really guilty. So, he confronts his father (played by the legendary Clancy Brown), asking about evidence, and telling him he may have killed an innocent man. The kids don’t remember for sure if their stories were real. For instance, they talked about being taken to a cave that was never found. So, we spend part of the movie feeling kind of bad for Freddy. Until the last 20 minutes or so. We’ll get to that.

Advantage: 2010. That portion of the story was handled much better in the remake.

In our original, and its numerous sequels, Freddy’s face is scary, and frankly, gross. It’s part of what makes him so imposing. And it’s an iconic look. You’d know the character if all you saw was a flash of cheek.

In 2010, Freddy is made to look more like an actual burn victim. So, there are some points given for realism. He reminded me a bit of Gary Oldman’s character in Hannibal, actually. However, Freddy Krueger isn’t supposed to look like an ordinary man. He’s a movie monster. Also, Jackie Earle Haley‘s build is so slight, Freddy’s head looks super tiny. Not very scary.

Best makeup: 1984 (and sequels). Freddy’s face is iconic, so changing it so drastically was an odd choice.

Freddy, as played by Robert Englund, has a voice that will, in fact, haunt your dreams. And, as with the original makeup, it is very identifiable. You could hear an audio clip, and immediately know it’s Freddy.

Now, Haley’s voice… heavy sigh Did you see Watchmen? He’s legit doing the Rorschach voice again. 100 percent. It’s distracting to the point of taking you right out of the movie every time he talks. Exactly the opposite of the original, where Freddy’s voice pulls you in.

While we’re on the topic of how Freddy sounds, let’s also address what he says. The original Freddy has a dark humor about him. His quips are often quite funny and quotable. It makes him somehow both scary, and almost likable, at the same time.

The 2010 Freddy is not funny. His statements don’t come across as haunting, either, just awkward. He pulls off the occasional quip, such as, “Why are you screaming? I haven’t even cut you yet.” Overall, though, this dialogue is just not Freddy (even when he’s saying a line from the original).

The character of Tina (Amanda Wyss) in the original, becomes Kris (Katie Cassidy) here. In both cases, she’s presented as the lead character, but is then killed off, and the focus shifts to Nancy. I have really enjoyed the false protagonist twist in almost every movie I’ve seen it done in. Actually, it would have been quite a surprise here (2010), if I didn’t already know Nancy becomes the main character (because of the original).

Where the original Tina takes it, though, is her death scene. Kris’ death is essentially the same as Tina’s, but is taken so far over-the-top, it is unintentionally hilarious. Tina’s was much more terrifying.

Verdict: 2010 takes this one, even if Tina’s death was better.

Where the tone of these two movies differs the greatest is, surprisingly, not with Freddy, but Nancy. Our 2010 Nancy, Rooney Mara, is a completely different character than our 1984 Nancy, Heather Langenkamp. In general, I would say Mara is the superior actor, but in the confines of the Elm Street universe, I’d have to give the edge to Langenkamp.

The original Nancy, toward the end of the film, goes all action movie heroine on us. In a montage that looks like a hybrid of Die Hard and Home Alone, Nancy sets up booby traps, and prepares for a real-world showdown with the killer of her dreams.

Our remake Nancy gets pretty badass, too, when push comes to shove, it just takes longer. Before that, she’s kind of… well, she’s kind of like Kristen Stewart in the Twilight films. Which is to say kind of blank.

In your typical horror film, there is not a lot of drama-like emotion in the story. So, I was more than a little caught off guard when the 2010 A Nightmare on Elm Street made me cry. That never happened with any film in the original franchise.

As the film nears the end, Nancy and Quentin locate evidence of a disturbing truth. Krueger, was, indeed, a pedophile who preyed on them and their friends when they attended preschool together. It is absolutely heartbreaking, and uncomfortable, and it makes you want to see Freddy die all over again. The two young actors did an exceptional job conveying the shock, and devastation of this discovery. Very well done.

An issue I’ve always had with the original movie is the defeat of Freddy. Disappearing/dissolving when Nancy turns her back, as if he’d been beamed aboard The Enterprise via Wonkavision never quite did it for me. It was virtually a textbook example of anticlimactic.

His defeat/death via dismemberment in the 2010 remake was far more satisfying, especially with Nancy’s action star-like quip: “you’re in my world now, b****!” After the photos Quentin found, a gory death was owed to a man as much a monster in life as he is in nightmares.

Trigger warning: If you’re a survivor of sexual assault, the following video may be upsetting. The ending, however, is quite cathartic.

The remake may have won some of the battles, especially in the defeat of Freddy, but I have to say the original won the war. A better Freddy, a better Nancy, and better kills (other than Freddy’s). Also, the original is just scarier, which is really the whole point of a horror film, after all. Modern jump scares are no replacement for feeling haunted long after you’ve finished watching.

Thank you for reading! What are your thoughts on the original and remake of A Nightmare on Elm Street? Comment down below!

One the sexual assault warning should be on top and before the video. Not to mention a SPOILER alert for those who never saw the movies before would be nice as well!

If you had watched the 2nd nightmare film… you would have found out about the pedophile part (if I remember right) Also you would have realized that the first and 2nd Nightmares were condensed into the 2010 movie. Which as I always say the ONLY good thing about it was just that, having the backstory in it.

Otherwise… ‘Freddy’ which isn’t even Robert Englund is crappy, Kellan Lutz still looks hot even when he’s not getting any sleep… They screwed up so many paerts of the original.. YOU NEVER MESS WITH THE ORIGINAL! and what do they do… Backwards johnny Depp scene! A*Holes

Try This (and yes I included your article’s link in it as well)
https://multiscreenmotivision.wordpress.com/2017/02/22/classic-cuts-nightmare-on-elm-street/

Actually, the warning IS above the video. There is also a spoiler warning in the beginning of the article. Thanks for sharing your thoughts on the films, I appreciate it!