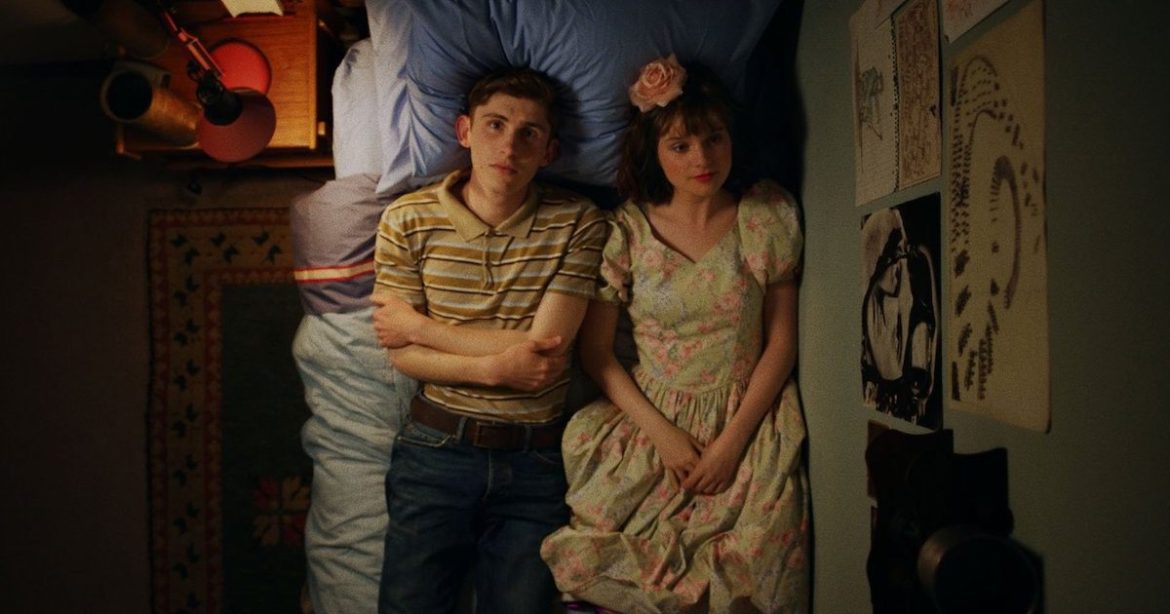 The most important relationships in any teenager’s life, no matter where they are in the world, are their friendships with other teenagers. It’s the crux of socialization, of discovering one’s own identity, of creating a space for oneself separate from the family unit. Sometimes, films with teen protagonists overlook platonic relationships in favor of their volatile romantic counterparts. Dating Amber is a lovely exception, with the added bonus of two queer protagonists. Eddie, a deeply closeted Irish high schooler training to enlist in the army, and Amber, an out and proud lesbian with dyed pink hair, concoct a scheme in 1995 to pretend to date one another until graduation. It all goes splendidly until Amber wants to stop pretending, and Eddie wishes he didn’t have to. Dating Amber has a lot of heart, and besides the confusing ending, does a really good job of expressing it.

Eddie (Fionn O’Shea, or the guy who played the sniveling Jamie in Normal People), is a skinny, sensitive guy who wants to go into the military like his dad. Everyone around him is somewhat aware that he isn’t traditionally masculine, ranging from his mom (Sharon Horgan) and dad (Barry Ward) exchanging glances at the dinner table when he talks about a girlfriend, to his obnoxious friends at school calling him the f-slur. Eddie wants desperately to be normal and attracted to women, but finds himself staring a little too much at his handsome math teacher. Amber (the radiant Lola Petticrew) notices this, and offers to be his fake girlfriend so that their classmates and parents will get off their backs about dating. Eddie, eventually, wants to keep the ruse up with Amber and be content in their lives as friends, but Amber falls in love with a university student and can’t pretend anymore.

Dating Amber does an excellent job of balancing camp and poignancy. In one moment, Eddie and Amber are having a ridiculous kissing scene that’s cringeworthy to look at, in the next Eddie is crying, trying to convince himself he’s straight. O’Shea does a great job of portraying the conflicting feelings Eddie has, and Petticrew plays off of them beautifully. Their platonic chemistry is the whole point, and I loved it, truly. Horgan, one of my favorites from This Way Up, does an excellent job as a mother and wife in crisis, with her marriage falling apart as she discovers Eddie might be gay. What I love most is how comedy is never sacrificed for emotional weight, and vice versa.

My readers familiar with Derry Girls will probably notice a lot of similarities with Dating Amber. They both have a campy tone, deal with coming out in a surprisingly progressive way, and take place in 1995. I can’t find any overlap in their writers, but that doesn’t mean they don’t exist! This isn’t incredibly important to the plot or anything, but it played a big role in my enjoyment of Dating Amber.

I cannot really speak to the accuracy of the dialogue or setting, as I am an American who was born in 1996, but the writing is dynamite. The conversations were realistic and witty, the emotional stakes felt real, and it is incredibly entertaining. David Freyne, writer and director of Dating Amber, does an excellent job of balancing the film. I was thoroughly impressed. As someone who has watched pretty much every film in the LGBTQ+ canon, it’s not often such a funny one comes along. It was refreshing!

The one bone I have to pick with this movie is the ending. Spoilers ahead! You have been warned. In essence, a sort of side plot is that Amber and her mom live in a trailer park, and Amber rents out an empty one to her classmates who want to have sex. They pay her ten quid, and she has been saving it all up for years to get out of their small Irish town. It’s revealed she’s saved up almost 2,000 pounds, and dreams of moving to London. By the end of the film, she gives all the money to Eddie to go start a life somewhere else, and refuses to go with him. Granted, she has a girlfriend in Dublin at that point, so it makes sense she would want to stay in Ireland, but you’re not going to take any of it? She could have definitely gotten a couple month’s rent in Dublin for half of it! And given him the rest! Why does Eddie need all of it?

This is also after, mind you, Eddie has spent the back half of the film calling Amber the d-slur and just beating himself up with internalized homophobia. I found it upsetting that Amber sacrificed her future for her friend who hasn’t really redeemed himself. Maybe she knew he needed it more than her, but it just really rubbed me the wrong way that Eddie gets to leave and start over with money that wasn’t his to begin with. Maybe I’m reading it wrong, but I felt Amber got the short end of the stick.

Overall, I think this is a lovely film that deals with the coming out process in a nuanced and interesting way, while still being very funny and enjoyable to watch. It endeared me to Finn O’Shea, which I did not think was possible. I am excited for the day I can watch a movie about platonic queer friendships without any angst or homophobia, but I’ll let it slide one more day for Dating Amber.

Thank you for reading! What are your thoughts on Dating Amber? Comment below!

[…] challenging, funny, and thoughtful. In it, he takes on the complexities of suicide, friendship, and millennial angst when two friends make a pact to kill themselves at the end of the day. This pact leads Val (Jerrod […]

[…] probably the best sex scene I’ve seen on my screen this year, and yes of course I am counting Normal People. I have to give Lee, Winslet, and Ronan all an immense amount of credit for how intimate and lovely […]

Incredible to read, not a big movie person but for sure going to watch this now!