‘Portrait of a Lady on Fire’ Exit Survey: We’re All in a Glass Case of Emotion

written by The MovieBabble Staff February 26, 2020 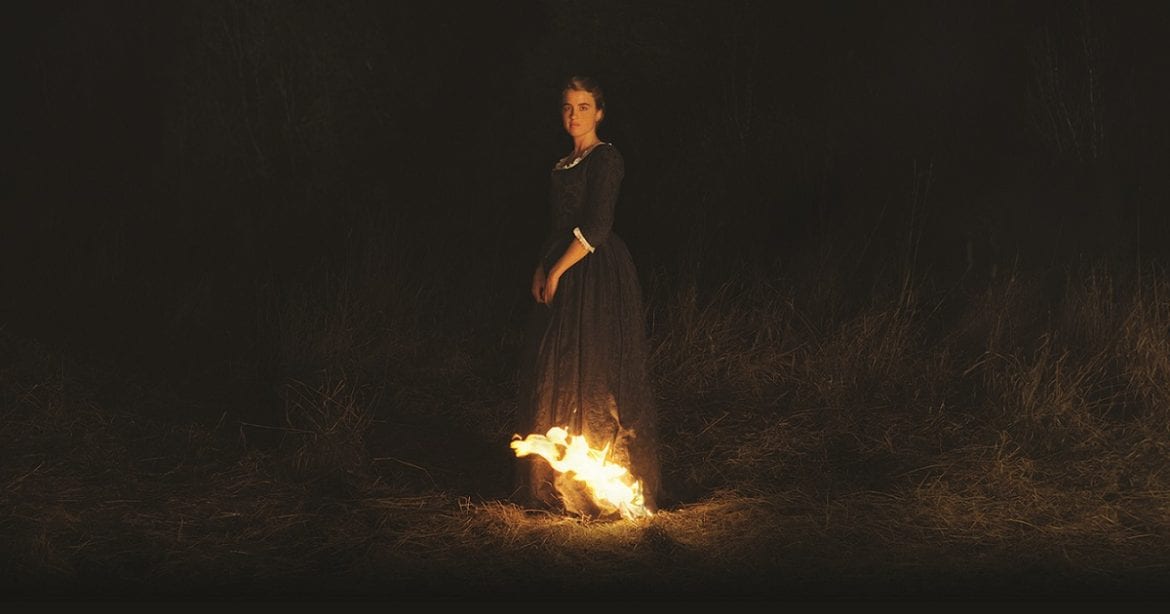 Every so often, a romance film comes around and wrecks just about everyone who sees it — Portrait of a Lady on Fire is that film. After a small, awards-qualifying release late in 2019, the film is out across the country and quickly making a name for itself in the independent space. Stans are popping up all over the place, and it’s easy to see why: it’s one of the best romance movies of the last few years.

Members of the MovieBabble staff break down some of the more noteworthy parts of the film in our Portrait of a Lady on Fire Exit Survey.

Which performance did you like more: Noémie Merlant or Adéle Haenel’s?

Spencer Henderson: There really isn’t a way for me to determine the superior performance because both affected me on such a deep level. I also think that the strength of both performances speaks to the incredible screenplay because both characters feel completely distinct from one another and have wildly different voices. The performances both have subtleties that really sneak up on you by the end of the film and the chemistry that Merlant and Haenel have is on another level.

Ashvin Sivakumar: I think they’re both equals in that department. While Haenel’s performance is quieter and more subtle, staying true to her underlying feelings and latent personality towards Merlant’s character, Merlant is instantly more outward and eager with performing her character which plays well alongside Haenel’s internal performance. It’s really hard to compare them while they’re so different because they play so well next to each other and truly bounce off each other, making each other feel more authentic.

Adina Bernstein: Both performances were on point. Neither was better than the other.

Nick Kush: I’m the one who wrote this question, and even I don’t want to pick between the two! Haenel is mesmerizing as she keeps everything close to the vest, articulating emotions that are ready to burst out of her with a simple flutter or stare. Merlant is ravishing as well: she’s more open and eager. They’re two halves of a perfect whole.

Spencer Henderson: For me, the reveal when Marianne is at the art show and sees the portrait of Héloïse is the most moved I have been by a film in some time. There is so much subtext in that scene that the film has laid beautifully starting with the notion that art can never truly capture the essence of someone or something you love. Even Marianne feels unsatisfied with her portrait because you cannot capture the entire essence of a person in one image, even if you are obsessed with them. She is staring at a piece of art made to resemble the woman she loves, but the artist failed to capture Héloïse. When she looks down and sees Héloïse has her hand slightly revealing the numbered page 28 in her book, I felt such a sense of sadness for these characters and the purity of the love they felt for one another.

Anna Campion: The best moment is when Héloïse lists all the things she notices about Marianne. *heart eyes*

Ashvin Sivakumar: The scene where Merlant is painting Haenel and Merlant goes to her to adjust her posture — the attraction and tension between the two characters play out wonderfully.

Adina Bernstein: When Héloïse finally agrees to sit for the portrait. I love it because it’s the first time the audience and Marianne can see who Héloïse truly is.

Nick Kush: In a movie filled with transcendent scenes, my favorite moments are looks that Marianne and Héloïse share. Each of them is coded with romantic and sensual attraction, but also deep-seated fear and reservations about the uncertainty of it all. If I had to choose, I guess my favorite would be during the prolonged painting session, where Marianne and Héloïse trade gazes in the lead-up to the back-and-forth about how much they’ve noticed about each other.

My favorite gaze in movie history is still Tomasz Kot lovingly looking at Joanna Kulig while she sings in Cold War, but more than a dozen gazes in Portrait of a Lady on Fire are knocking on that door and threatening to smash it down.

What was the most romantic part of the movie?

Spencer Henderson: Virtually every frame in Portrait of a Lady on Fire is oozing with romance. A lot of this film is a waiting game for these characters to give in to the passion they feel for one another, and I think those early scenes are incredible largely due to the subtlety in the performances. But if I had to choose one moment, it would likely be the moment by the fire when Marianne and Héloïse are looking at each other across the fire, and falling deeper in love with one another.

Anna Campion: The most romantic moment is when Marianne asks Héloïse if she has dreamt about her, and Héloïse replies no, “I thought of you.” *heart eyes*

Ashvin Sivakumar: That scene I just mentioned above where Merlant adjusts Haenel’s posture and they kiss, because this romantic tension had been building up and the release of it is just so wonderful.

Nick Kush: It all goes back to those gazes! Specifically, the ones at the peak of their romance. Somehow, Merlant and Haenel bypassed the artifice that comes with performing and express real emotion for each other. It’s impossible to not get swept away by their soft but totally genuine smiles.

Given how beautiful everything looks, which image from the film will stick with you the longest?

Spencer Henderson: This film was shot in 8K so they could really capture and retain a vivid sense of color, and I think this pays off. I honestly feel this is the best shot film of 2019, and it is an absolute crime that it wasn’t even nominated at the Academy Awards. I think those scenes of Héloïse posing for the portrait in her green dress with the light blue wall as a backdrop behind her will stick with me for a very long time. However, this is a film full of images that are burned into my mind in the best possible way.

Adina Bernstein: The end scene at the theater. It’s heartbreaking and so beautifully filmed.

Nick Kush: I love Héloïse as a specter — it’s so haunting. The actual effect is done very effectively, contrasting the purest whites with the darkest blacks as her gown billows. But I love how it represents the manifestation of Marianne’s fading memory of Héloïse as their time together starts to come to a close; it’s starkly beautiful.

Let’s talk about the last 10 minutes — how much of a wreck were you?

Spencer Henderson: I am still not okay with what the last 10 minutes of this film did to me.

Anna Campion: I sobbed throughout the last moments of this film, particularly the orchestra scene. Adéle, teach me!

Ashvin Sivakumar: I watched Portrait of a Lady on Fire during a long festival run which took every emotion out of my body, so while I wasn’t shedding any tears or showing any outward wreckage, I was pretty broken on the inside. It’s sort of devastating to live with the reality of a love that’ll never truly be realized because of the cruel world we lived in. I recently watched Ang Lee’s masterful Brokeback Mountain — a film which has a similarly heartbreaking ending — and it truly broke me how unfair the world is, especially in the face of something as pure and raw as true love, so watching that made me truly appreciate just how painful the ending of Portrait of a Lady on Fire was.

Adina Bernstein: A huge wreck. It speaks to me about the power of love, especially when you cannot be with that person.

Nick Kush: I was not even remotely okay. I desperately could have used a hug!

Where does Portrait of a Lady on Fire rank in the pantheon of LGBTQ romances?

Spencer Henderson: This question makes me realize how many utterly fantastic LGBTQ films there are, and even still I would say this ranks somewhere near the top. I think Brokeback Mountain is my favorite romance film of all time (Letterboxd official), and I honestly feel that film is very similar to Portrait of a Lady on Fire. Both films are about characters living in a time when they are forced to repress their emotions because the world around them will never accept their true identity, and as a result, they lose the great love of their lives. Both films made me feel so deeply.

Anna Campion: So let’s get one thing straight: I love gay movies. And this? My favorite gay movie! What I love best is no one gets punished for love — there’s no shame involved, only the fleetingness of love. Gorgeous. God.

Ashvin Sivakumar: High up there, for sure. It’s been adored critically and audiences love it, and it’s so meticulously crafted by Céline Sciamma. It’s bound to become a cultural phenomenon eventually. It’s wonderful and truly beautiful and passionate and it should be ranked high up there with the greats.

Adina Bernstein: I’m not sure exactly, but it’s utter perfection. We need more stories like this.

Nick Kush: It’s unquestionably near the top, but it’s so hard to say specifically, which has me feeling great about the current and future state of LGBTQ cinema in general. There are so many beautiful stories like this one to tell, no matter the setting or circumstances. I can’t wait for what great talents such as Céline Sciamma have in store for us next.

Thank you for reading! What are your thoughts on the Portrait of a Lady on Fire Exit Survey? Comment down below!

[…] society at virtually every moment of the 20th and 21st centuries (and before that as well), but how absolutely heartbreaking it is that this film remains so relevant in today’s world. It is a film with its finger on […]

https://monthlycritic.wordpress.com/2020/03/15/portrait-of-a-lady-on-fire/ My review if you fancy comparing. Welcome to follow for more in the week.