Enter the Orbit of the Great Michelle Pfeiffer in ‘French Exit’ 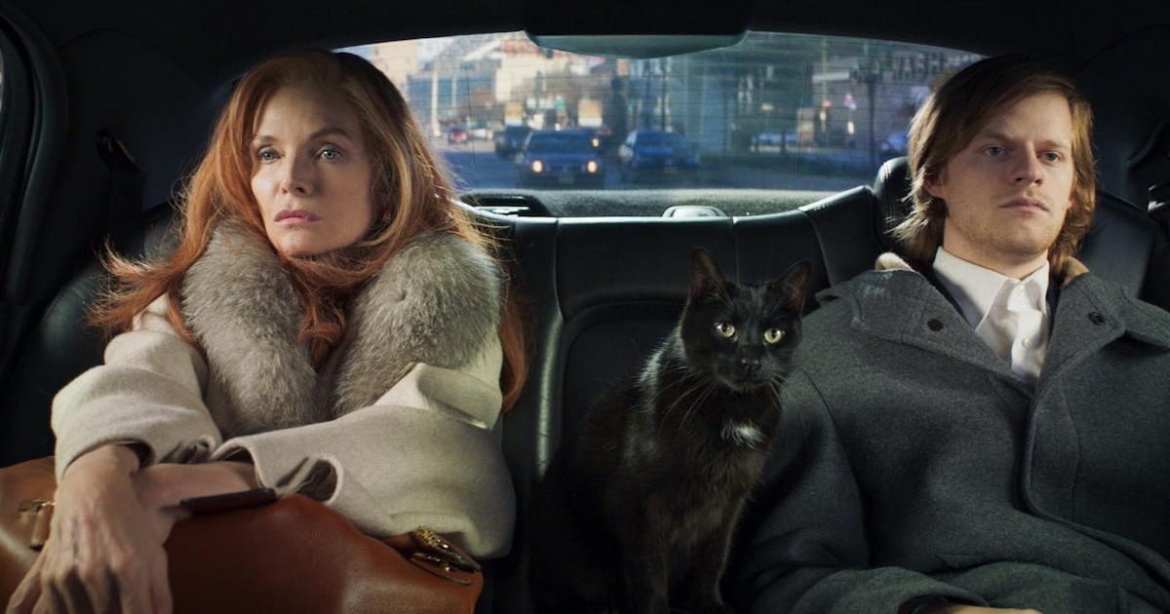 What a treat it must be to be Lucas Hedges. By twenty-four, he’s already established himself as one of the finer actors of his generation and has had the chance to work for the best — from Anderson, to Lonergan, to Soderbergh. But even more enviously, recently his roles have found him adjacent to scene-stealing legends — an onscreen stand-in for the helplessly spellbound audience. In 2020’s Let Them All Talk, it was the luminous trio of Streep, Bergen, and Wiest. In French Exit, it’s Michelle Pfeiffer — towering, dominant, and singular. And while Hedges is the costar that gets to bask the most in her performance, really the treat is for all who bear witness.

French Exit enters at the tail end of what seems to be a fabulous story.

Frances Price (Pfeiffer) is a once-wealthy Manhattan socialite whose star had been long fading, even if her money only abruptly runs out as the film begins. As she puts it, “My plan was to die before the money ran out, but I kept and keep not dying, and here I am.” And so she sells what little remains, packs her things, and moves to Paris with her son (Hedges) and her cat. Sad and simple premise, right? Occasionally the former, and hardly the latter.

You see Pfeiffer’s Price is an unhinged giant storming through her world — brilliant, with more than just a streak of madness. Her son is engaged (it’s a secret) and emotionally stunted (it’s obvious). And her cat, well her cat is her reincarnated late husband Frank (voiced by Tracy Letts). Plus, frozen sex toys! Dumplin’ as a psychic! Now you’re getting a better picture of the antics that this surreal, wildly bleak, wickedly funny comedy gets into.

The film is anchored by a few movie-making scenes and scene-stealing performances.

First, there is Valerie Mahaffey as Madame Reynard, a widow who idolized the Frances Price of yesteryear and hopes to befriend what’s left of her today. If the entire movie feels surreal, the only word left for Madame Reynard is nutcase. Her tightrope act as both comedic side act and sympathetic soul is impressive, and her delivery of the improbably strange script is pitch-perfect.

Hedges’ performance as Malcolm Price does justice to a complicated character, one who had little in the way of a normal upbringing, and who had little to do with even his own mother until she ripped him from his boarding school following the death of his father. He is more or less an observer of his own life, a life completely consumed by the maternal star at its center. But what makes him interesting is that he doesn’t pull away in a clichéd attempt to leave her orbit; he’s perfectly content to watch the show. And even from the first scene, there’s a wry smile that plays on his face just before his mother speaks — cluing you in on just what a show it’s about to be.

No matter what expectations Hedges’ tipoffs build up, Pfeiffer always delivers. In one scene, Malcolm watches helplessly as their waiter walks outside for a smoke break rather than retrieving their check as requested. Pfeiffer’s Frances coolly douses the table’s centerpiece in perfume and lights the flowers ablaze, to the shock and horror of the entire waitstaff. Even financially humbled, she is a woman who storms through life with fiery abandon. In fact, Pfeiffer is so great — delivering a performance that is dark and sad in places and whip-smart and hysterical in others — you somehow still want more of what she’s giving. I’ve never begged for a prequel before, but the stories told of Frances Price’s prime make you want to see more of that.

The movie is at its best when it embraces its weirdness, going all-in on its more fantastical and strange elements and not even addressing the reality around it. There are moments where it stumbled for me, and I found those mostly to be in the clunky shifts between the various tones the film attempted to juggle. And the script’s completely unrealistic dialogue works as a black comedy but makes me wish for equally surreal visuals to match (something pseudo-Wes Anderson, which I always got the sense French Exit wanted to be).

Michelle Pfeiffer is somewhat of a rarity in Hollywood: unquestionable talent, stunning beauty, and diverse range — and still underappreciated compared to her contemporaries. If you haven’t figured it out — I love her. She’s been brilliant as a muse (The Fabulous Baker Boys), a femme fatale (Batman Returns), a high-camp villain (Stardust), and everything in between. Her line delivery in Batman Returns of the sentence, “Life’s a bitch, now so am I” lives rent-free in my rotted gay brain. So even if French Exit is tonally uneven across and never quite lives up to the work she’s putting into it, I speak for all Pfeiffer-heads when I say: more of this, please.

There’s a moment in the film, after a series of particularly icy comments from Pfeiffer, where Hedges looks at her and whispers, “You’re being a dick.” She leans towards him wide-eyed and thrilled by her own behavior, and replies, “isn’t it awful?” Except it isn’t. It’s really, really fun.

French Exit is available only in theaters on April 2nd.

Thank you for reading! What are your thoughts on French Exit? Comment down below!