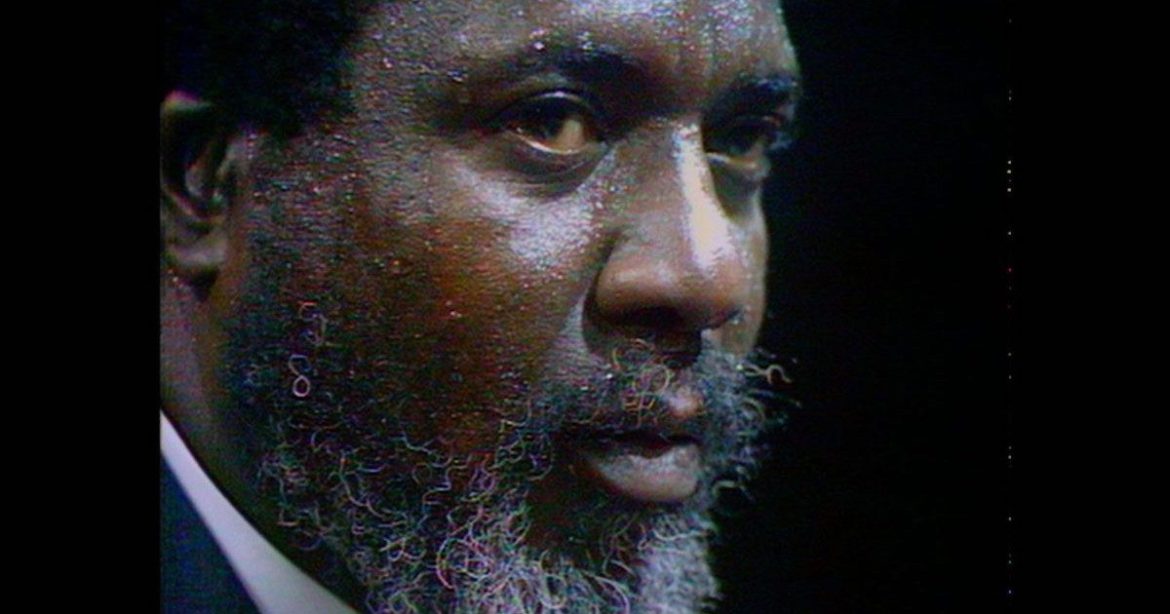 When you envision the legacy of jazz pianist Thelonious Monk, you’re probably familiar with his distinct improvisation style — his winding melodies, harmonies, techniques, and dissonances that have since gone down as hallmarks in jazz history, and cemented him as a legend by association. But all artists, in one form or another, and regardless of how legendary they are in regards to status, are all subject to notions of commercialization, exploitation, and devaluation, especially given the long, racially charged history of jazz music in America and Western nations — and Alain Gomis’s Rewind and Play is in equal measure a highlighting of the beauty of Monk’s musical talents, as well as a deeply unsettling look at the casually antagonizing attitudes he faced, particularly from French audiences at the end of a tour in December of 1969.

Using unreleased footage from a French television interview with Monk from the program “Jazz Portrait,” Gomis’s film is predominantly an achievement in editing, as it pieces together this increasingly disorienting look at Monk’s underhanded mistreatment by the show’s producers and the interviewer, Henri Renaud, establishing an unnerving power dynamic with racial implications that charges this film with an undercurrent of pure helplessness. We’re greeted in the opening moments of Rewind and Play with the sight of Thelonious arriving at the show’s set, sitting in the backseat of a car with his wife, Nellie Smith, by his side. He and Smith are being recorded, with Smith answering the vast majority of the questions while Monk largely keeps to himself and smokes silently on his own — an evident look at Monk’s introversion and a demonstration of the discomfort he has with conversation.

That discomfort gets misinterpreted and misused all throughout the interview he’s subject to, which peppers him with various questions about his life, music, and performances that he answers candidly and straightforwardly — much to the dissatisfaction and chagrin of the show’s producers. Wanting to pander to a French audience seeking apparently more substantial answers to these questions, Renaud proceeds to repeatedly ask Monk the same questions over the course of several takes to elicit arbitrarily better responses, even going so far as to completely cut his generally benign answers out of a belief that they’re derogatory to the audience’s values. It doesn’t help that Monk finds himself in a position where Renaud is speaking largely in French to translate Monk’s answers, communicate with the crew, and explain Monk’s history, only turning to English in order to ask Monk questions — and that he’s also sweating bullets because of intensely bright lights being pointed at his warm outfit for such an incredibly long time.

Interspersed between these sequences are extended moments where Monk gets to demonstrate his skills by playing songs from his repertoire — a welcome respite from the hail of microaggressions pelting him at every turn over the course of the interview, and an extended, beautiful display of the means of communication Monk is evidently more familiar and comfortable with. But including these moments of musical bliss also only serve as a reminder of the callousness of the interview’s reductive nature, highlighting how the commodification of Monk’s musical insights into easily digestible, manufactured responses for an interview can only come off as an act of intensely ignorant disregard for his full dimensionality, even if the interviewer occasionally expresses admiration for Monk’s work. It’s incredibly disheartening to see Monk being unable to verbally stand up for himself as he’s subtly demeaned and denigrated by a TV crew who also doesn’t even speak his language, and the enlightening moments of music we do receive both emphasize and relieve us from that continued sense of dread.

Every so often, Rewind and Play‘s technical foundations appear to destabilize — the sound drops out deliberately, or the image glitches out as the film follows its titular conceit — all adding to the disorientation that Gomis wields this archival footage with in order to potently put us in Monk’s shoes. But this isn’t just a concise, relatively short portrayal of the exploitation Monk suffered in media; it’s also an effective portrayal of how to recontextualize existing resources in an almost completely new light, and how perspective can be powerfully wielded in order to enlighten us on the nuances of a situation recorded on tape that wouldn’t have been readily apparent in their original form. Piercing through the gradual devaluation of Monk’s music on the show is a reminder that Monk’s legacy is a testament to his dignity above all else — the effortless, magical way he navigates his way through his complex improvisations is ultimately what listeners remember him best for, and evidently, the one thing that brought him the most joy above all else.

For more information on Rewind and Play and other films playing at the New York Film Festival, check out their website.

Thank you for reading! What are your thoughts on Rewind and Play? Comment down below!