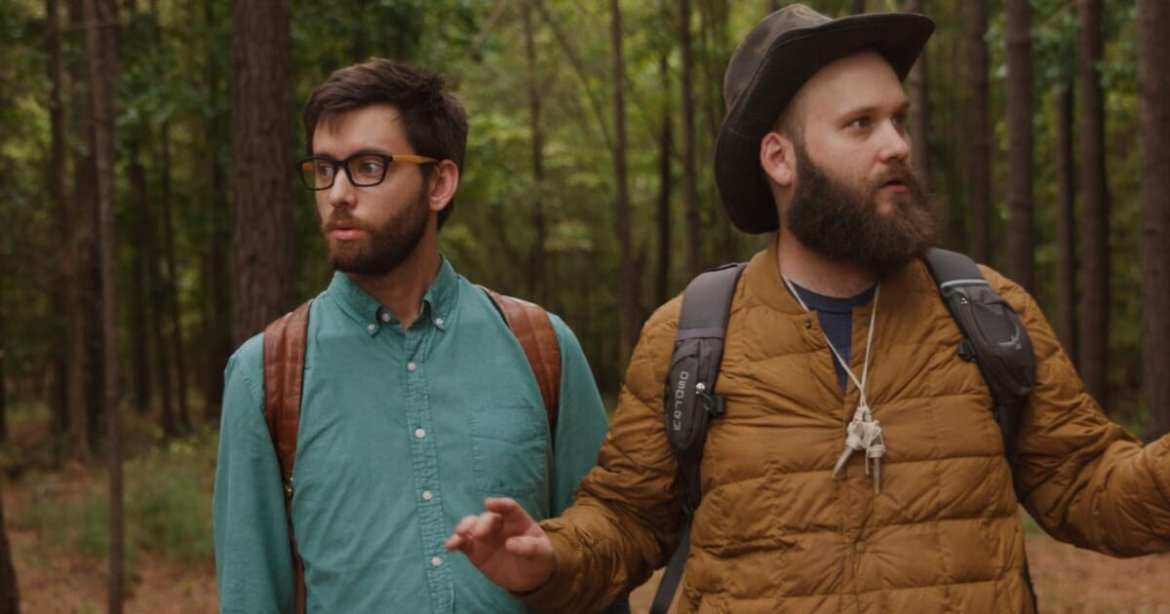 If You Go Down to the Woods Today

Vlogger Brian is losing his mojo. Reporting for  Compound, a website with an extremely familiar-looking logo and modus operandi, he´s tired of covering the stupidest of modern trends and wants to be a reporter of actual news, not craft ale beard design or whatever. So you can imagine his chagrin when he’s sent to interview the attendees of a Bigfoot festival. But this trip into the Boondocks has more excitement waiting than Brian or his Cameraman Zach (Director Zach Lamplugh, playing himself or at least an eponymous character) were expecting.

Bloody Kids and Their Youtubes and Whatnot

15 Things You Didn’t Know About Bigfoot opens with a pitch-perfect version of HBO´s Viceland, you can feel for Brian’s eye-rolling disbelief at hipsters pitching living in a dumpster as “urban camping” which let’s face it, you´ve probably seen things at that level of, “are you kidding me?” on the internet many, many times. (The original title was The Vice Guide To Bigfoot. Presumably, someone’s lawyers put paid to that.) The guests/weirdos are all spot-on in their performances and it’s the sort of “joke basket” setup that can give you a dozen gags a minute. “MC Slipslap” (Bryan Fers) in particular, is a faultless “Yeeaaah Boyyyy” MTV-type presenter who they could have spun out into a whole show.

Soon though, Brian and Zach are on the road in search of self-declared “Cryptid Commander” Jeff (Jeffrey Stephenson) who’s … well, the sort of person who posts bigfoot videos on YouTube. It’s fair to say his life is not going gangbusters. There’s a fair amount of awkward glances to the camera from our intrepid reporter at the state of affairs he’s found himself in. Just when it seems like the reporting assignment is going to be a total bust… things get interesting.

There´s a Fine Line Between a Trailer and a Spoiler

Now, the trailer is pretty funny, but I would advise not watching it. Because it contains some great gags that are fantastic gags with the benefit of the setup and world-building the trailer doesn’t have. I appreciate that it must be difficult to sell comedies without showing your prime jokes, I’ll try and help here. Trust me, this is a very, very funny film.

Suffice to say, the intrepid reporters and their Eagle Scout guide stumble across things in the woods that are best avoided. There’s a nice balance between the cynical correspondents and the, “no really, this is going to be great” enthusiasm of Jed. Childress plays Jed with just the right amount of desperation under the surface. He might not entirely believe what he’s selling, but he wants to believe it, otherwise, he might just be an idiot in the woods. If he can get the film crew on board, maybe he really will be the respected guide he plays.

Ultimately, what makes 15 Things You Didn’t Know About Bigfoot work is practiced performers riffing off each other. I don´t know how much footage was shot but it has the feel of something like This Is Spinal Tap where there’s a ton on the cutting room floor for time reasons, not quality. An underrated aspect of comedy is to get in and out while everyone is still laughing. This and Spinal Tap both clock in at less than 90 minutes, which is preferable to the roughly nine days duration of  Anchorman 2: Even the Title Continues for Too Long.

As a bonus, the film isn’t just a verbal comedy. In the latter stages, it switches to a more action/horror mode and the gunfights and gore are better than you’d expect from a microbudget movie. The time spent introducing the characters pays off in the end.

Throughout, the makers use nice little touches to sell the movie as real. They edit in grainy effects for old footage, graphics for the web interludes… small things, but the effort elevates it above the feel of “a couple of guys did this for $500”. It successfully balances the Nigel Tufnel-esque absurd comedy with some pointed satire on the state of modern reporting and its slide into clickbait.

It’s nice to see the makers move up from TV to film so successfully and it will be fun to see where they go next.

Thanks for reading, and listening! What are your thoughts on 15 Things You Didn’t Know About Bigfoot? Comment down below!

He likes Red Baron pizza and his name is Daryl.