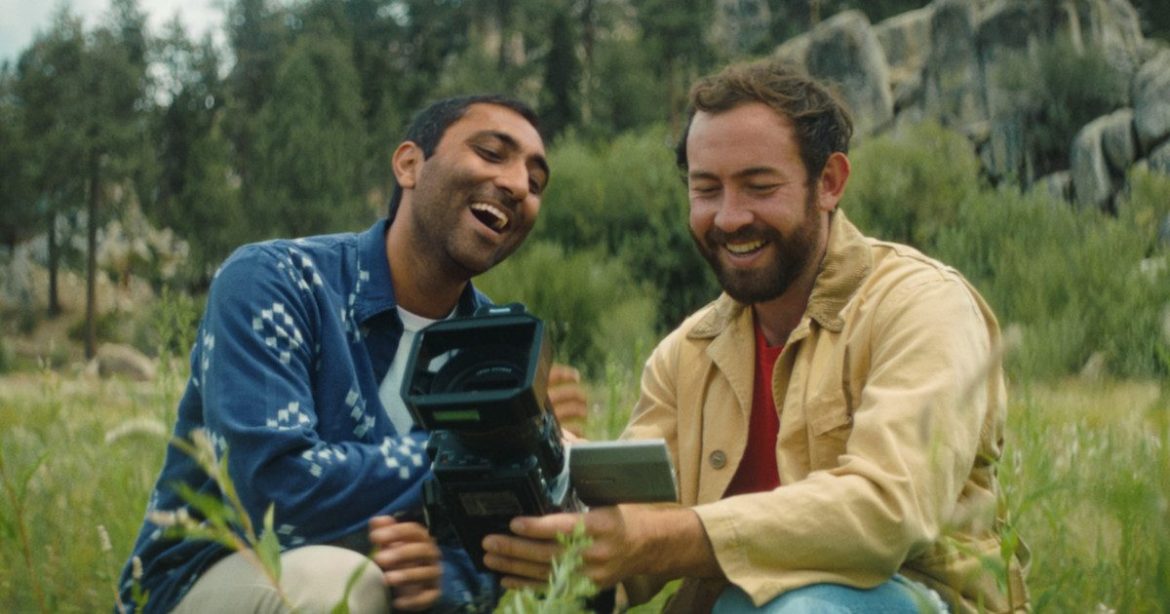 It brings me no joy to report that an indie comedy film evidently made in earnest did not resonate or connect with me, but Parker Seaman and Devin Das’s debut feature, Wes Schlagenhauf Is Dying, is a potent example of how films about filmmaking can often be led down deeply misguided paths. Filled to the brim with self-aware meta-commentary whose self-referentiality is barely wielded effectively, Wes Schlagenhauf Is Dying starts off as a somewhat niche buddy comedy that slowly reveals itself to instead be a deeply cynical product, helmed by two unlikeable characters whose sardonic charm and sharp wit only carries them up to the first half of the film before their developmental stagnation genuinely becomes obnoxious. It’s a meta-indie-comedy that a) never seems to go beyond surface-level, laugh-out-loud nods at the wit of their fourth-wall-breaking deconstruction, b) attempts to inject sentimental ideas about the friendship and connection at the heart of independent filmmaking directly adjacent to its characters acting in intensely petty and selfish ways, and c) predicates its comedy on Film Twitter-niche humor before then transitioning to crass, perhaps even insensitive jokes from its characters at their most unlikeable moments, all while ending on a note so abrupt it feels like more should have been present closer to the film’s conclusion.

The opening few moments of Wes are perhaps the most indicative of the thematic dissonance that, instead of being resolved or acknowledged in some form, resonates all throughout the film to ill effect: a contrast between its attempted themes of connection and mutual respect, and the incomprehensible egoism of its main cast. The film starts with this brief, high-energy, and somewhat wholesome montage of behind-the-scenes footage of various shorts and projects that Seaman, Das, and Schlagenhauf (all of whom play fictional versions of themselves in the film’s narrative) worked on together — all while clearly having fun! — before the film then cuts directly to 2017. Wes, having reached his wit’s end while filming a low-brow beef jerky commercial, makes the decision to leave a filmmaking business that’s amounted to little more than meaningless advertisement work for him, and heads out to Boise, Idaho after a fierce argument with a sarcastically unreceptive Parker and Devin. Fast-forward to 2020, and the two find out that Wes has caught COVID, presumably after daring to watch Christopher Nolan’s Tenet in theaters. Once they make plans to go visit him in Boise after years of being apart — armed with a sentimental Cameo video sent from indie legend Mark Duplass — they soon realize that they can capitalize on this opportunity to make the next quintessential road trip indie film, and spend their time documenting their exploits on camera as they head on their way to see their friend… in a trip that’s delaying itself more and more as Parker and Devin start to clash in ways they seem to never have before.

There are a number of places to start in addressing a film like Wes Schlagenhauf Is Dying, but perhaps the most obvious point to be made here has to do with the film’s humor. Without the knowledge of the lows that the second half of the film enters, the first half is mostly a collection of jokes that are more likely to resonate than not with certain sects of the film community, with lots of references to wildly successful indie darlings such as Little Miss Sunshine, jabs at books such as Blake Snyder’s Save the Cat that are sure to ring a bell with screenwriters, and moments that lampshade certain tropes in road trip films of this ilk before diving headfirst into replicating those exact same tropes. Some of them are mildly funny, but the vast majority of them are mostly just there, and many of them are not likely to get any sort of reaction from audiences outside of certain specific niches. One of the few bright spots of this film, at least, is a montage sequence that features Parker and Devin going around different fast food places all throughout the day moments after they immediately mention their need to include said montage at this specific point in the film’s story. Without any knowledge of what follows, it’s just innocuous enough for one to nod along with these two characters having a good time together and sharing decent chemistry before their selfishness gets ahold of them for the entire rest of the film.

But it’s difficult to understate just how hard-to-swallow the humor towards the end of the film becomes when so much of it is dependent on its leads acting in intensely immature ways that never finds its way towards a satisfying conclusion. Towards the midpoint of the film, Devin and Parker share a Save-the-Cat-based conversation about how the story now requires there to be a major conflict between the two, before Parker then proceeds to sabotage a major opportunity for Devin in the middle of the night, inevitably causing an enormous rift between the two as they get closer and closer to Boise. One would think that, closer to the end, the two characters would once again lampshade a potential recovery point for their relationship after several scenes of properly fleshed-out conflict and development — not least of which, again, would probably be related to the friendships, collaborations, and bonds formed through indie filmmaking — but the film just never rebounds from there, nor does it seem interested in doing so.

Instead, we’re treated to a series of plot points that, while likely not out of malicious intent, don’t really treat COVID as a health crisis with much emotional weight — and also somehow finds a way to make light of a blink-and-you’ll-miss-it yet discomforting mention of suicide — and heavily affirm, in a rather upsetting way, the deeply rooted toxicity of the leads’ friendships. By the time all this ends, it leaves around less than ten minutes for the film to somehow resolve the damage done to these characters’ relationships as naturally as possible, and then simultaneously reaffirm its aforementioned themes of friendship at a breakneck pace. (That goes about as elegantly as anticipated.) It doesn’t help that the conclusion it ultimately opts for doesn’t appear to build off of something genuinely apologetic and movingly earnest (like a handful of solid indie comedy films appear to do), but predicates itself yet again on comedic self-referentiality that, at this point in the story, comes off as tonally dissonant and emotionally dishonest.

Even outside of that, the meta-commentary centerpiece of the film — the half-mockumentary, half-road-trip-indie-flick in question that Parker and Devin are filming — is barely shown to even be in production outside of a few scenes in which one of them holds the camera up to the other doing something mundane. Could there possibly have been more scenes dedicated to the actual “making” of this film-within-a-film, perhaps with an even greater amount of creative changes in video quality and format along the way, to indicate that Parker and Devin (the characters) actually took their own advice within the context of their in-narrative goal to actually create an indie movie, and not just in the context of the fourth-wall-glancing scenes that Seaman and Das (the filmmakers) shot for the actual, completed movie, Wes Schlagenhauf Is Dying? The only thing that not doing this seems to have resulted in is a film that dedicates so much of its time to, as mentioned above, ribbing on traditional tropes and plot beats before indulging in them shamelessly: as if — to paraphrase Bo Burnham, of all people — the film’s self-awareness absolves it of anything.

For all the sermonizing Wes Schlagenhauf Is Dying does every so often about the importance of sticking together through thick and thin, and how that importance resonates so deeply with the communities and friendships people form around independent filmmaking, so much of its narrative development works towards its antithesis, with selfish characters who are barely shown to grasp these lessons to begin with from start to finish. Meanwhile, its meta-commentary appears to work more in service of paranoiacally deflecting any impending criticism of its story rather than portraying anything meaningful or even tangible about the filmmaking process — an enormous misuse of potential that could have meshed well with its attempt at expressing its aforementioned themes. It’s such a genuine shame to see a potentially uplifting and revelatory premise be the foundation for a truly underwhelming structure that looks and feels a long way from being complete.

For more information on Wes Schlagenhauf Is Dying and other films playing at the Tribeca Film Festival, check out their website.

Thank you for reading! What are your thoughts on Wes Schlagenhauf Is Dying? Comment down below!

[…] it’s easy to look at the repertoire of films about COVID and deem them redundant, oftentimes incredibly lazy ways to artistically reflect a universal […]