Warning: major spoilers for the first A Quiet Place ahead.

The original A Quiet Place film was hugely successful, and first-time director John Krasinski did something that felt unique at the time. Not only was A Quiet Place set in an apocalyptic world where creatures would attack if they heard a sound, therefore forcing Krasinski to make a horror film with little noise, he also cast a deaf actress (Millicent Simmonds as Regan Abbott), and focused a lot of the sound design around her. While the film was not silent, many close-ups on Regan would change the sound design from a typically hearing one to the muffled life Regan lives. I really believe these things are huge reasons for what made A Quiet Place so special, and to me, a perfect horror film. So I had my reservations on Part II, because could it really do better or at the least as well as Part I?

Opening on Day One

A Quiet Place: Part II opens on director John Krasinski’s character Lee Abbott on day one of the apocalypse. With some heart-wrenching nods to the first film, we see the Abbott family’s first encounters with the creatures and the introduction of family friend Emmett (Cillian Murphy).

While it is not entirely the same, having gone through the first stages of a global disaster, it feels incredibly relatable to open on this. The quick adjustments we all had to make when COVID-19 hit, the disbelief of this entity suddenly taking over the world, it hits harder watching the Abbott family’s life gets turned upside down. Obviously, Part II was shot before the pandemic and was delayed to stick to a cinema release, but it’s incredibly fitting.

At first, the beginning also might feel like Krasinski wanted to make sure he could be credited as an actor in Part II, but actually, seeing the way Lee handled the first glances of a catastrophe actually becomes important later on.

We then move to pretty much the moment where the first film left us off; the Abbott family has just lost its father Lee and discovered how to weaken the creatures with a combination of Regan’s hearing aid and a stereo.

While they found some (temporary) solutions on how to handle this life, it is clear that the family has even bigger challenges to face this time. They are now a family relying entirely on Evelyn (Emily Blunt) as the only adult in the family, and they of course have a screaming baby to worry about in a silent world. Attempting to navigate life without Lee, they leave their farmhouse from Part I to find help and their old family friend Emmett, someone who has lost even more than the Abbott family. 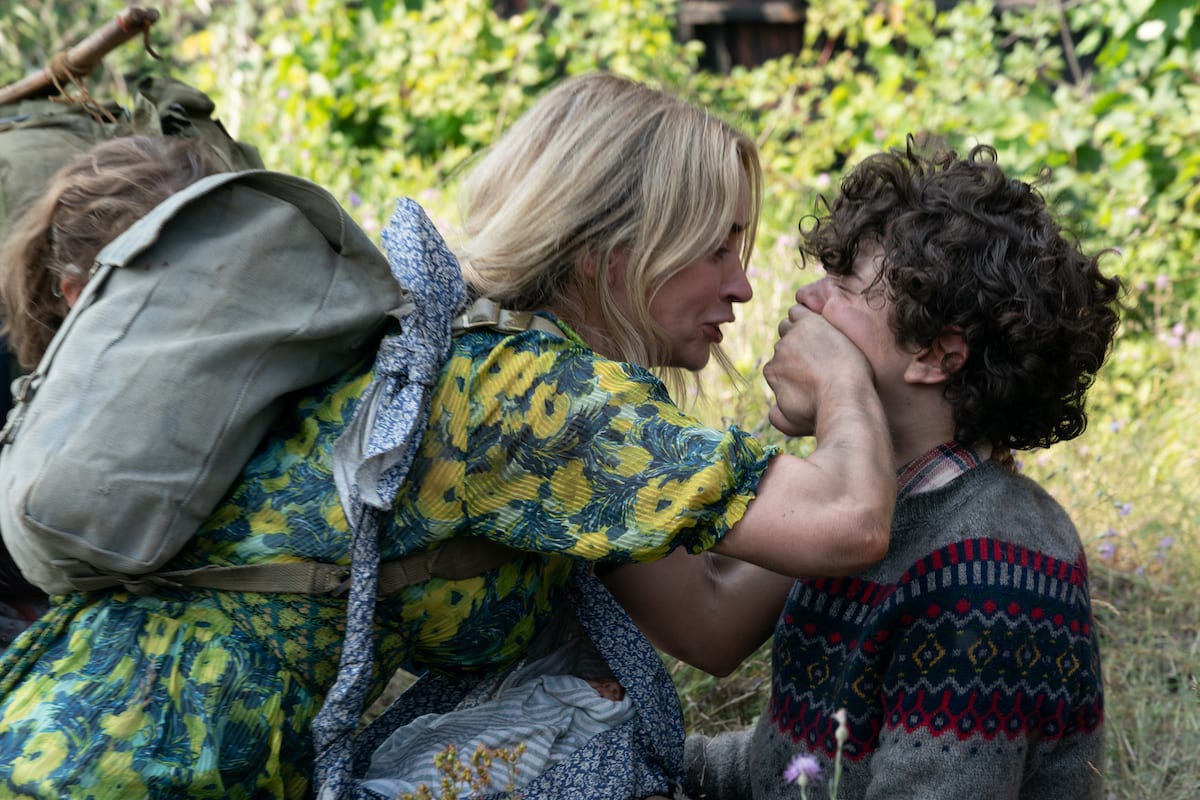 A Quiet Place was very much a horror film as well as it was a family drama. The tone in this installment is similar, with a heavy focus on the new character Emmett and Regan stepping up as the main character. While Lee is not present past the opening scene, his spirit is very much felt. He was always trying things out to help Regan with her hearing, he was always looking for new ways to fight these unknown entities and always put his family first. Ironically, as we know by now, it was Regan who found a way to beat the creatures, but only after Lee died and sacrificed himself to save his children.

Lee clearly left these values and attitudes behind, and it’s Regan who wants to step up to help her family and continue his legacy. Everything about this film, while just as terrifying as Part I, is equally heartwarming. Emmett’s character certainly doesn’t replace Lee, but he is clearly challenged by the Abbott family to regain faith in other humans.

Krasinski not only returned to direct, but he also wrote Part II. His writing manages to keep the tone and spirit of Part I alive. There are a couple of moments of foreshadowing that are perhaps too obvious, and a couple of moments that could’ve done with more fleshing out — some supporting characters and places the family encounters feel very much like quick sideshows rather than additions to the plot. But overall, Krasinski’s writing is really up to the standard it needed to have.

The acting never lacked in Part I, but it is worth stating that the addition of Cillian Murphy lifts the film, as well as Millicent Simmonds taking on a bigger role. She was already incredible in Part I, but her leading performance in Part II is mesmerizing. Murphy and Simmonds work well together on screen. In particular, the way they learn to interact with each other is a highlight. Murphy’s Emmett doesn’t understand sign language and doesn’t enunciate, and Simmonds’ Regan has to find ways to communicate with him. Deafness was very well explored in Part I, but it might’ve been less challenging for Regan as of course, her family is well equipped in sign language. Part II definitely took it that step further. The film demonstrates the importance of typically hearing people behaving more inclusively. But it also shows how Regan can do anything, and her deafness is in no way debilitating to her being a strong character.

Part I vs. Part II

Is A Quiet Place: Part II better than the first film? Personally, no, but it definitely lives up to its predecessor. At the end of the day, A Quiet Place felt fresh; Part II doesn’t necessarily add anything new to this and doesn’t explore any new concepts. What is impressive, however, is that I’d say the sound design is even better in this sequel. While it was very impressive in Part I, A Quiet Place: Part II explores playing with sound even more. This film is louder than the first film, but that’s okay — we understand this world now, so to hear a score when we know it is silent isn’t bothersome. The first film also stuck mainly to the farmhouse the family lived in, with a few cuts to different locations. Here, there is more traveling and separation of family members, meaning we get faster cuts and simultaneous events happening, giving Part II more of its own voice.

A Quiet Place: Part II‘s ending, even though well-rounded, might set up for a third installment, making this a trilogy. There is definitely more to explore, but with Part I being a perfect horror film and Part II being a wonderful successor, let’s hope that if this happens, it is done just as well.

Thank you for reading! What are your thoughts on A Quiet Place: Part II? Comment down below!