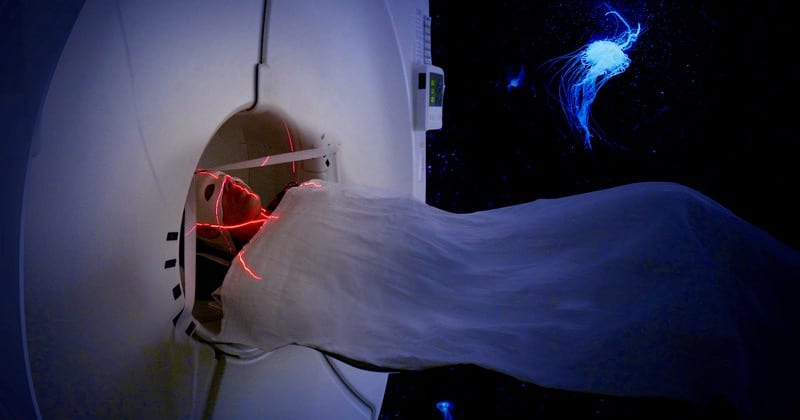 The nature of consciousness is a complex topic. One that humanity has tried to view through every lens that we’ve created or discovered. Religion, philosophy, psychology, biology, chemistry, and psychedelics, just to name a few. What is consciousness? Where does it come from? Is it unique to humans, or do animals and plants experience it? Is consciousness an individual experience or is it collective? What happens to our consciousness after we die? Aware — Glimpses of Consciousness, aims to tackle some of these questions.

The documentary explores consciousness from a range of perspectives. It frequently refers to the parable of the six blind men. For those unfamiliar, it’s the story of six blind men (obviously) who do not know the shape or size of an elephant. Each man touches a different part of the creature, only to be told by the others that his experience cannot be true, for theirs is something completely different. It highlights the subjective nature of experience, and the development of perceived truth, as well as fallacies. It’s a powerful lesson that perfectly captures why each perspective on consciousness could be different, and yet just as true.

The Complexity of Consciousness

The exploration of these different perspectives of consciousness certainly highlights how complex and potentially unanswerable the discussion is. We hear the views of experts from a range of fields, most of whom hold a Ph.D., including Matthieu Ricard, the Tibetan Monk. From exploring the building blocks of life to looking at learning behavior in plants, the definition of consciousness is ultimately left rather unexplored.

We hear different views of where consciousness stems from. Audiences are asked to consider the possibility that consciousness is a stream of universal or cosmic energy. We learn how consciousness plays a role in the development of ego and a sense of self. But Aware rarely dissects the base description of what consciousness actually is.

Without a clear definition, audiences are left with their own to work with. And yet, this is the exact problem that Aware raises: we all have different understandings. Without narrowing the definition down, even through finding common ground across the various perspectives, all that remains are random opinions. We all view consciousness differently. For example, are you conscious when you’re driving? Some would argue that of course, you must be conscious. And yet, anyone who drives for a living will tell you all about their brain’s autopilot function. Something we’ve all experienced with a range of activities.

Through highlighting the subjective nature of consciousness, Aware fails to delve into a single sub-topic with any depth. Although it occasionally touches the fringes of what could be an interesting discussion, it rarely takes the plunge. Preferring instead to tiptoe around the edges. Random shots of the sea, stags standing in the fog, or weird light visuals combined with ambient music may have added a sense of mystery. But I can’t help but feel that this time could have been put to better use exploring some of these topics in more depth.

I was surprised that Aware failed to mention some of the most notable consciousness discussion points. For example, the documentary touches on the Default Mode Network (DFN) of the brain — which is overactive in sufferers of anxiety and depression. It discusses the fact that psilocybin and meditation can both reduce DFN activity, but skips past the idea that “consciousness” when we’re being mindful is vastly different from “consciousness” involving past or future thoughts, which makes up most of our day-to-day consciousness. Again, this comes down to an unwillingness to address a single definition of consciousness.

Not once does the documentary raise the idea that consciousness and free will are merely illusions — a space through which mental processes take form. Our thoughts, our personality, our likes, and dislikes aren’t things we decide for ourselves. They are the product of deeper, subconscious and unconscious processes. There was a strange need to focus on consciousness as being something powerful and mysterious, perhaps akin to the force! Rather than a potential misstep in human evolution.

The documentary reveals some truly fascinating information about plants and their ability to “hear” and learn. But within the discussion of consciousness, Mycelium mushrooms are of even more interest. Here, we have a species that functions as a collective to form something eerily similar to neural networks of the brain.

And of course, I’d have to mention the theory of the bicameral mind as proposed by Julian Jaynes. A concept brought to pop culture by Westworld. The idea that only since the times of Ancient Greece has humanity experienced consciousness in the manner that we understand it today. Before then, our cognitive processes may have presented themselves as external hallucinations. Entire civilizations may have experienced shared hallucinations of dead leaders, warriors, family members, and even Gods. Given that the documentary frequently discusses the mystical and spiritual experiences of humanity, it’s interesting that it veers away from a theory that could offer some answers. At the very least, it would have been a truly fascinating talking point.

Overall, there’s no denying that Aware brings some incredibly fascinating ideas to the discussion. However, the documentary feels more like a long, drawn-out, brainstorming session. The topic of consciousness has the potential to capture the attention and imagination of almost anybody. But the slow pace of Aware sadly fails to do either. We see plenty of moments that seem to be building to a shocking revelation or hidden truth, only to fizzle out as we move to a different perspective. But then, maybe that’s the point? After all, we don’t have answers. We are almost clueless in our attempts to understand what consciousness is, at least in an objective sense.

That’s not to say that the documentary is a failure though. The focus on these varying perspectives will undoubtedly provide many people with new views on the question of consciousness. Aware certainly succeeds at highlighting just how chaotic and impossible consciousness is. However, I can’t shake the feeling that providing more time for each discussion would have allowed for deeper exploration. If Aware became a TV series, with each episode discussing a different perspective, I think audiences would enjoy it a lot more!

For more information on Aware — Glimpses of Consciousness and other films playing at the Melbourne Documentary Film Festival, check out their website.

Thank you for reading! What are your thoughts on Aware — Glimpses of Consciousness? Comment down below!

How sad a graduate student would use this website to grind their own axe without an understanding of consciousness or of this wonderful film. His statement, “There was a strange need to focus on consciousness as being something powerful and mysterious (in the film), perhaps akin to the force! Rather than a potential misstep in human evolution.” tells his readers all we need to know about the student’s limited parameters —possibly the very reason psychology has no more understanding of consciousness than it did four hundred years ago when the “problem” was first laid out by Descartes.The student’s “materialist” rationalization about consciousness is no more than a presumption —and more importantly, a presumption which has never brought fruit. Secondly, who presumes anymore that consciousness is limited to humans?

Thank you for the feedback!
I would genuinely love to hear more about your perspective.
To avoid any misunderstandings, I should make it clear that my personal view of consciousness isn’t one based on psychology teachings or a solely material explanation. I do, however, feel that there are some truly fascinating perspectives within those areas that were missed out completely from the documentary. It’s not that I feel they are more right or accurate than any other, as consciousness is incredibly mysterious, but for a documentary seeking answers, the perspectives I mentioned could have filled in some gaps. Again, not because they are “right”, but because when exploring all possibilities within a subject we’ve barely scratched the surface on, it’s important to consider (much like the parable of the blind men and the elephant) that all perspective are right rather than contradictory.
I also don’t assume that consciousness is limited to humans, but that depends entirely on the definition you’re using for consciousness, which is what I was trying to highlight with my post. It’s also why I raised some alternative discussion points regarding consciousness within other organisms.

I would have liked to discuss much more within the post, such as the collective unconscious, the idea of the human brain simply being a receiver for the consciousness stream, and much more, but my posts have a tendency to be too long at the best of times.

I appreciate your comment though. Your view has given me something to think about in terms of how my opinion comes across in my writing.

Have a great day!