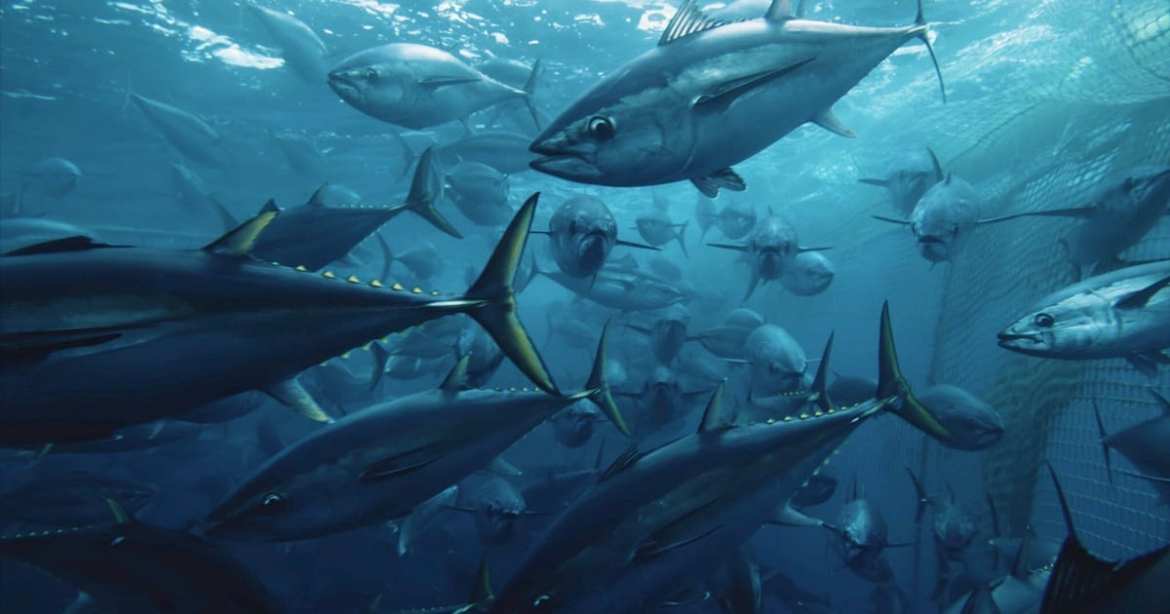 Let’s get it out of the way first: Conspirasea was right there. It’s a vastly better name, but then again, it may have raised expectations for a documentary certainly incapable of delivering on any promise of quality. Instead, British filmmaker Ali Tabrizi went with Seaspiracy, a title that fits alongside producer Kip Andersen’s previous documentary Cowspiracy. You really hate to see it.

In Seaspiracy, Tabrizi dives deep into the environmental impact of the fishing industry. What he claims to have begun as a celebration of the marine life he dearly loves quickly turns into one man’s journey of horrific oceanic discoveries. The narrative of the documentary constantly pivots its focus, peeling back layers of a devastating environmental tale; it tackles commercial fishing, the truth about plastic ocean debris, the failings of sustainable fishing attempts, and even modern fishing slavery.

My primary emotion by the end of this film was rage.

The claims made in Seaspiracy — headlined by the fact that the oceans will run out of fish by 2048 — are horrifying, if true. Tabrizi rejects current aquaculture and sustainable fishing attempts as viable pieces of the ocean solution, claiming ineffectiveness, and uses damning interviews with individuals both in the fishing industry and from non-profits working to save the oceans to imply that nothing being done is working. By the end, you’re left furious, if not despondent. Indeed, that was certainly his intention, and to that end, the film succeeds. But you’re also left wondering, “can all of this be true?” And that’s where it starts to get a little murkier.

In the weeks following Seaspiracy’s splashy release, experts have slammed the documentary as a unilateral campaign of misinformation. Interview participants have claimed that their words were severely taken out of context. Facts and figures — presented in the film as enormous, incriminatory infographics — were unethically sourced. Many of the numbers presented in the film were taken from studies conducted 15-20 years ago, whose findings have since been corrected (some of those studies were apocryphal from the jump). That claim about the oceans running out of fish by 2048? It came from a 2006 press release that miscited its own finding. Fish populations have actually been increasing for years.

Beyond the falsehoods contained within the documentary, Seaspiracy just isn’t very good.

Once you have realized that the shocking news you’re receiving is shocking because it isn’t true, what’s left is a rather ugly style of documentary filmmaking that I hope goes away for good. The film adopts an “I’m as shocked as you are” tone that goes past its “gotcha” interview moments and into its delivery of the data and throughout its narrative. Tabrizi frequently expresses bewilderment that the media is ignoring this factor in the climate crisis and then attempts to prove his point with a clip from the media covering the topic. At times his own shock borders on naivety; surely as a sea lover and student of the environment, he was not wholly unfamiliar with this problem. He acts as an angry stand-in for the audience and forgoes his responsibility to be the subject matter expert for a Netflix viewership who could likely use some real facts around these topics.

But here’s the thing that Seaspiracy gets right: we are in a crisis.

Critics of this documentary not only know this but take it more seriously than the film does. And it’s a shame that this documentary abandons its responsibility to present the truth because what it does well is not just visualizing the data but visceralizing the data. It infuses science with the emotion that the general public needs to really connect to it. It makes your blood boil. When done right (see: Blackfish), that type of filmmaking can change the world. But Seaspiracy and its creators are more interested in pushing their vision for a different world — an exclusively vegan diet — than opening their minds to all the ways in which our societal practices can and must radically change in order to save the oceans as we know them. That isn’t to say that veganism is not a solution. For those who are able, it’s an incredibly positive contribution to both the environment and personal health. But to present it as the only solution to a series of systemic global crises is unrealistic, classist, and ignorant of science and culture.

Earth Day is on Thursday, April 22nd this year, and I encourage everyone to take a moment to further educate themselves about the crises facing our planet — there are plenty to choose from, and plenty of great documentaries to pick from. Unfortunately, Seaspiracy isn’t one of them. Commercial fishing is a major modern issue, and it deserves a more responsible documentary and a filmmaker more up to the task.

Seaspiracy is available now on Netflix.

Thank you for reading! What are your thoughts on Seaspiracy? Comment down below!