‘Have a Good Trip: Adventures in Psychedelics’ isn’t Very Educational, but It is Fun! 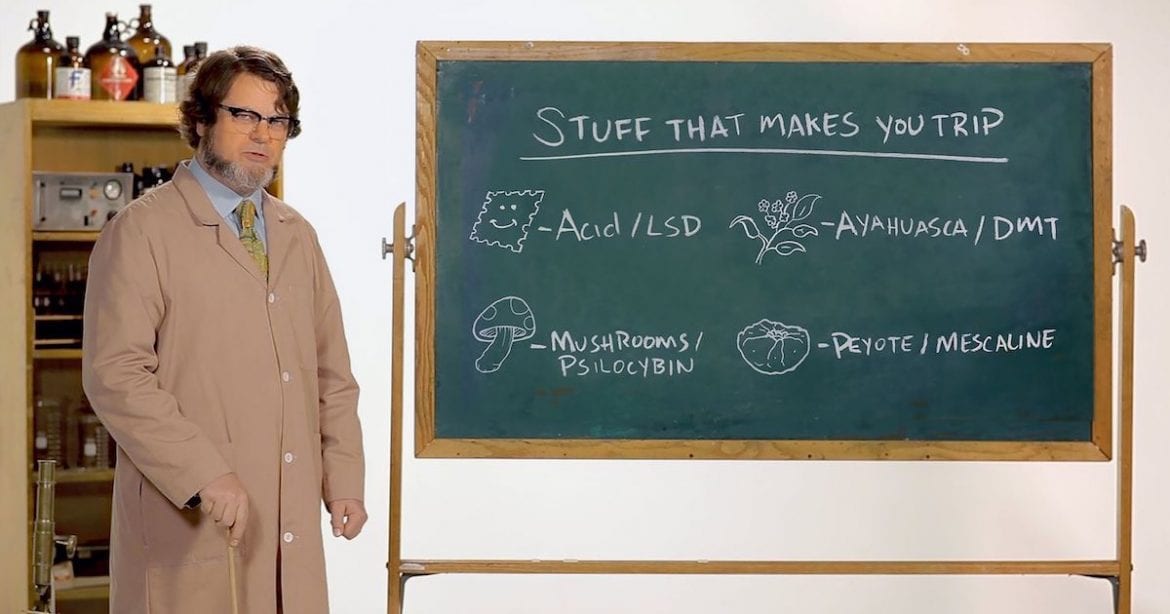 When you hear that Netflix is releasing a documentary involving comedians, actors, chefs, musicians, and others, all sharing their psychedelic drug trip stories, what do you imagine? Whacky animations? Bizarrely retro skits? Nick Offerman dressed like a science professor? If so, you’d be right! Overall, Have a Good Trip misses the mark as far as documentaries go. But that’s not to say that it doesn’t offer something of value. I’m going to look at some of the positive aspects. I’ll then consider the message it sends to viewers. But I’m also going to look at how it could have been improved.

We can summarize Have a Good Trip: Adventures in Psychedelics fairly simply. It takes a bunch of celebrities and asks them about their drug experiences. Through a combination of storytelling, animations, skits, and narration, this documentary explores the nature of psychedelics. From the good trips to the bad trips. From science to pop culture. Prepare to immerse yourself in the groovy world of psychotropic hallucinogens.

Nick Offerman Wants You to Have a Good Trip!

“Don’t get me wrong, drugs can be dangerous…but they can also be hilarious!”

What follows may appear on the surface to simply be a bunch of famous people sharing stories about their drug experiences. Ultimately, this is the content of most of the documentary. However, there are some more interesting moments to be found. Although scattered and sometimes purposefully contradictory, the documentary does contain the odd nugget of genuine advice. For good measure, it throws in some cringy examples of common anti-drug adverts from the 70s, 80, and 90s.

Each story serves as a cautionary tale. Some warnings seem like common sense, but we also hear some concepts that may be lesser-known. The fact that we hear about the positives and the negatives allows audiences to better understand the nature of these substances. You could say that this documentary shows you the psychedelic drug world through rose-tinted glasses. But it also acknowledges that fact. Audiences gain a better understanding of how not to repeat the mistakes of others. Assuming that participating in such activities is something you’re inclined to do. However, I believe the purpose of the documentary isn’t to provide practical advice and scientific knowledge, but rather a change in perception.

“The Awakening is Still Going On”

Have a Good Trip isn’t so much about providing information on the effect of psychedelic drugs from a scientific standpoint. Instead, it’s about showing a different side to what most people are familiar with. We all remember the school assemblies about the dangers of drugs. Many of us will have seen videos in class about Becky’s nightmarish ecstasy experience or Josh’s traumatic mushroom trip. Such stories often end in a horrific death! Psychedelics and underachievers often go hand in hand, at least according to pop culture. Just look at The Big Lebowski!

Have A Good Trip shines a more optimistic light on the nature of psychedelic experiences. Hearing from famous faces about their positive drug experiences is one thing, but the documentary takes things a step further. It discusses bad trips just as often as good trips. But through exploring the benefits of such an ordeal, audiences can consider the possibility that psychedelics are less of a recreational toy and more of a psychological tool. This is certainly a recurring theme throughout the documentary as we hear from various sources about the potential clinical benefits of psychedelic therapies.

Ultimately, the intention behind Have a Good Trip is to allow audiences to see that psychedelics should be approached in the same manner as any other risky experience. Moderation is key, because taking too much of any substance is never a good idea. Intention is key because every tool needs to serve a purpose. You don’t just wave a hammer around without the intention of hammering a nail. Finally, you need to manage expectations because no two psychedelic experiences are ever the same.

A Documentary about Substances that Lacks Substance

Don’t get me wrong, Have a Good Trip was enjoyable to watch. The crazy animations combined with the comedic storytelling made me chuckle from time to time. However, the problem with a documentary on psychedelics is the subjective nature of the experiences. We hear from a range of celebrities about their positive or negatives trips. Overall, it covers a range of different psychedelics, from peyote to LSD. And while this seemingly light-hearted format offers entertainment value, it doesn’t offer much to sway the views of those with opposing opinions.

It’s certainly possible that Have a Good Trip aims to be little more than a celebrity endorsement for the decriminalization of psychedelics. However, given the vast wealth of scientific knowledge and literature on the subject, I felt that some substance would have gone a long way. Similar documentaries, such as DMT: The Spirit Molecule, used the same format while still delving into the nitty-gritty. Hearing about the chemical effect of these substances on the brain or how they’ve been used outside of recent history or Western culture would have offered a much-needed layer to this documentary. Too much would have changed the tone, but I feel audiences could have used a little something extra for our brains to nibble on.

Again, I’d like to reiterate that it was perhaps the intention of Donick Cary (writer and director) to avoid delving deeply into research. That way, Have a Good Trip remains something entertaining and easy to watch. Creating a documentary that is research-heavy might put people off watching it, whereas celebrities telling wacky stories sounds far more appealing.

There’s no denying that the agenda for this documentary is clear, but what we have to ask ourselves is: does it matter? Have A Good Trip isn’t about teaching you how to use psychedelics. It’s not a ‘How to’ guide and certainly doesn’t suggest you now have the tools to go explore such substances. Instead, it simply considers the possibility that certain drugs shouldn’t be equated with the tools of Satan. Is that such an irredeemable thought? Is it such a crime to simply remain open-minded about psychedelics?

The documentary is essentially trying to awaken audiences to two ideas: 1) psychedelic substances can be dangerous when used incorrectly, but when used correctly, they can offer truly unique experiences. 2) If there’s a possibility that these substances can be used in the treatment of mental health issues, then shouldn’t we at least allow scientific bodies to explore this possibility further? If we allow societal norms to dictate the direction of research and innovation, we limit ourselves to a very narrow corridor of potential progression. Have a Good Trip may not leave you feeling educated, but it will leave you pondering some of the deeper issues about the nature of reality.

Thank you for reading! What are your thoughts on Have a Good Trip: Adventures in Psychedelics? Comment down below!

I found the film tedious and deeply i enlightening. Pyschedelics have great healing potential and films like this trivialise and damage the cause.

[…] Early on, Disclosure states an eye-opening statistic: 80% of people don’t personally know someone who is transgender, meaning an overwhelming majority of us get our information on trans people from some form of media. I, too, belong to that 80%, meaning I’m definitely the target audience for this documentary. […]

[…] part personal journey of self-discovery for Alissiya, director Marta Pulk packs so much into this documentary. Alissiya is not only embracing this chaotic voyage into the weird and wonderful world of Estonian […]

“You know how boring it is when people you don’t really know tell drug stories? Well, what if it was Anthony Bourdain and Deepak bloody Chopra?”
As pitches go, it’s not the best one.