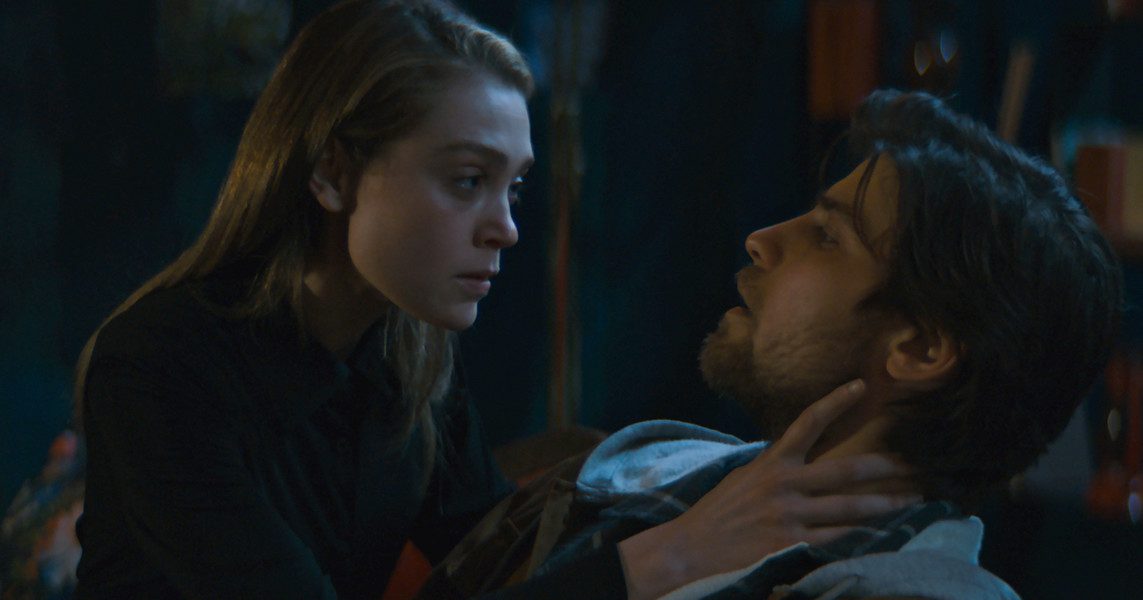 Cinema has given us many incarnations and interpretations of the vampire mythos since F.W Murnau’s Nosferatu almost a century ago. We’ve seen them portrayed as everything from baroque aristocrats, mindless parasitic monsters, mysterious outsiders in a world where they must combat a greater evil, and they have even been depicted as complex analogies for addiction. Blaine Thurier’s Kicking Blood is a very direct realization of the latter concept, presenting his nocturnal bloodsuckers as miserable junkies that prey on lowly derelicts and drifters.

Anna (Alanna Bale) is one such vampire who has grown weary of her immortality. Though her work as a librarian gives her some shred of purpose in the human world, Anna has seemingly resigned herself to this eternal monotonous cycle of luring in easy prey and getting “high as fuck” off their blood. That is until a chance encounter on the streets with Robbie (Luke Bilyk), an alcoholic on verge of suicide who Anna initially takes in to be her next unfortunate victim. But Robbie is different; he is desperate for redemption and Anna is inspired by his commitment to overcome his addiction and become a better person. Her newfound companion has given her hope and she embarks on her own journey to break her deadly habit and kick the blood for good, in spite of the fact that it will probably kill her.

It’s rare for a vampire film to be about a vampire that wants to become human again and though being very upfront about its themes of addiction, Kicking Blood gives a well-executed confrontation of these ideas. The film excels at tearing down the mystique and otherworldliness of vampirism and emphasizing the aspects that truly make it a curse. No fangs, no red eyes, no capes, no transforming into bats: here they’re just Canadian hipster types with a Vitamin D deficiency, a crippling addiction for human blood, and the inability to step into sunlight without spontaneously combusting. Anna takes no pleasure in her kills and seems to feed more out of a necessity than for a strong desire to drink blood, a notion she has felt for what could possibly be centuries as we are never given her real age.

While the film nails its core conceit, other aspects of Kicking Blood are lacking real bite. Bale and Bilyk’s performances are fantastic, but their burgeoning relationship takes a long time to fully invest in and does not have the impact that it should.  The conflict between Anna and her fellow vampires (Benjamin Sutherland and Ella Jonas Farlinger) who see themselves as gods and feel insulted and betrayed that Anna does not want to be one of them anymore is compelling, but ultimately results in an underwhelming finale that involves speechifying on the power of humanity. Anna’s friendship with her elderly human co-worker (Rosemary Dunsmore) adds a dicey, yet fascinating layer to Anna’s quest to reclaim her mortality, but instead is left largely unexplored.

The whole may be less than the sum of its parts, but the parts of Kicking Blood that really work is what makes it an engaging viewing experience. Straightforward yet effective with its portrayal of addiction, cleverly told through a modern reimagining of vampire lore.

Kicking Blood is screening in cinemas and online as part of TIFF from September 9-18. For more information and to view the full program, head to tiff.net.

Thank you for reading! What are your thoughts on Kicking Blood? Comment down below!