Ralph Fiennes couldn't stop playing villains even if he wanted to. 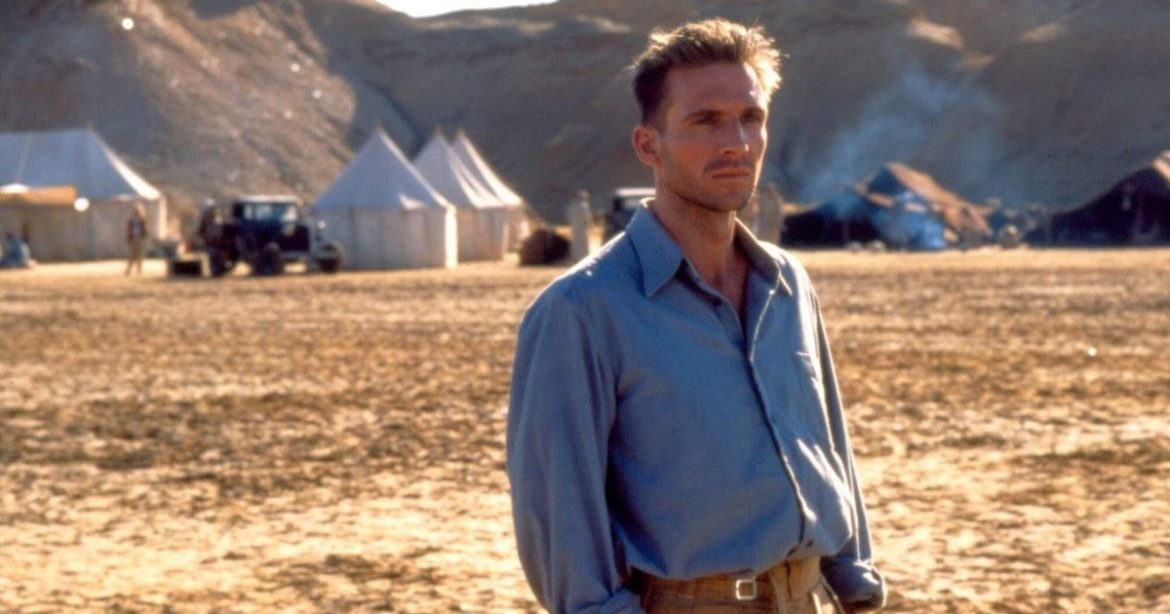 Ralph Fiennes excels at playing villains, even when he isn’t necessarily trying to. The English Patient is a good example of this. Even though Laszlo de Almásy (Fiennes) is our main character that we should sympathize with, sometimes it almost seems like the film wants to paint him as a villain.

While some blame rests with screenwriters and the director, Anthony Minghella, Fiennes is truly just that great at playing villains. His mannerisms, the way he speaks, what he chooses to focus on — they all paint the perfect villain.

Sulking is an art. You can’t just roll your eyes and groan like a teenager. You have to look distraught with a touch of annoyance and disinterest. Ralph Fiennes is skilled at this. He just has one of those faces that makes sulking a talent. Not everyone can be broody and moody like he can.

Even when Almásy is dying as a husk of his former self, he still sulks like a professional. The flippant remarks and dismissive noises made portray to us the kind of man he was in his prime. It’s why we can believe David Caravaggio (Willem Dafoe) so easily when he says that Almásy isn’t all he says he is.

The sulking is also evident when Almásy is courting Katharine Clifton (Kristin Scott Thomas). Rather than an adoring lover, Almásy is the mysterious bad boy. He attracts with his moodiness and hidden smile. He’s hard to read, which is what attracts Katharine to him in the first place.

He Does Bad Things

Almásy is no saint — he is the cause of many people’s deaths. In his doomed quest to save Katharine, he gives up valuable maps to the German Nazis, allowing them to kill many Allied soldiers and maim Caravaggio. While he’s doing it for a good reason, he allowed many people to die for a love that was doomed. He didn’t play the hero and he didn’t care about anyone but Katharine.

Plus, the whole plot revolves around Almásy courting Katharine, a married woman. Regardless of how romantic or right it seems to the audience, that’s still pretty wrong. Especially if the husband is Colin Firth. How could you ever cheat that poor attractive man out of a marriage he deserves?

Jokes aside, it’s clear through the film that Almásy is no saint. Caravaggio is our first clue that something’s off about him. Even though Almásy landed himself in a horribly tragic situation, it doesn’t take away the fact that he is responsible for multiple deaths. Love isn’t a good enough reason to cause the deaths of dozens of your comrades.

Ralph, We Are in Public

By far the most uncomfortable moment in The English Patient, is when Almásy and Katharine have sex in a public area. Not even behind closed doors. They are literally behind a wall of some sort where anyone could walk by. Do they not realize this fact? Do they not care? Either way, I’m adding that to the list of reasons that Almásy is a bad guy.

Seriously, there were numerous soldiers in the courtyard of the building and these two were just getting it on in front of a frosted window. What if some soldier got curious and wandered around the courtyard? What was their endgame? Not only that, but Katharine’s husband, Geoffrey (Firth), was in the building as well!

Look, I know it’s not necessarily evil, but if I came around the corner and saw Voldemort getting it on with someone, I would be pretty much scarred for life. Lawsuit incoming, buddy. Pull up your pants and take it back to the bedroom where I don’t have to watch you be awkward and disgusting.

Not only does Almásy betray the Allied soldiers, he also betrays his oldest friend, Madox (Julian Wadham). Unable to bear the thought that his best friend could be a spy for the German army, he kills himself. This devastates Almásy when Caravaggio informs him, but that’s a consequence he should have thought of before he gave up everything for his forbidden love.

Madox couldn’t fathom the idea that Almásy would have lied to him. They were friends who shared everything. They had been on so many expeditions together and knew each other so well. How could Almásy have done such a thing?

It’s the classic trope of the main character leaving his buddy for the woman, only this time it’s a more realistic consequence. Instead of eventually getting along with her, Madox feels the pain of what happens when your best friend leaves you for someone they haven’t known nearly as long. It’s painful and Almasy should have never neglected his friend like that.

Ralph Fiennes has a way of melting into character while retaining the parts of him that make him Ralph. Yes, he’s the handsome lover but he’s also moody and brooding. Romantic, yet practical. He makes Almasy all his own so that no other actor would play it just the same.

This is the kind of acting Fiennes puts into every movie, whether it’s Harry Potter or Schindler’s List or The English Patient. It keeps characters from becoming two-dimensional. Not every good character is all good and not every bad character is all bad; not every actor can communicate this very well. That’s why only Ralph Fiennes can play the part of Laszlo de Almásy as well as he did.

Thank you for reading! What are your thoughts on The English Patient? Comment down below!