Jason Goes to Space… Yes, This Is as Dumb as It Sounds…

written by Christopher Hantman May 3, 2022 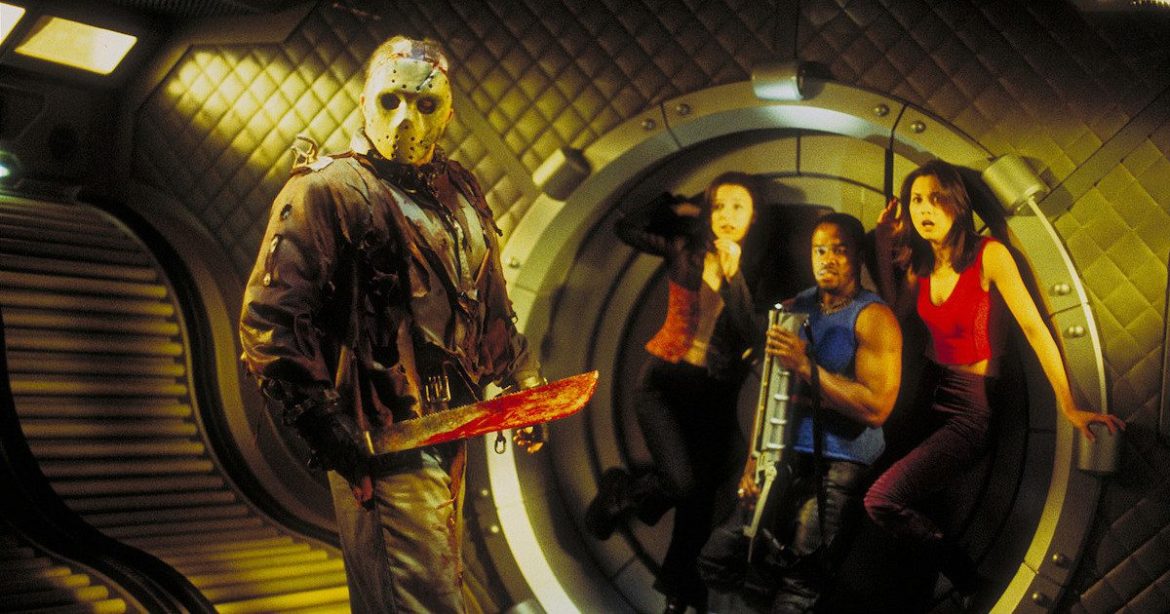 This April we “celebrated” the 20th anniversary of the steaming heap of space garbage that is, Jason X. In my opinion, this film is the worst in the Friday the 13th franchise. Jason X was directed by the late James Isaac and his first stab (pun intended) at an entry in the famous franchise. Isaac followed this film with two poorly received direct-to-DVD bargain-bin horrors.

The titular Jason of Jason X, however, is played by franchise regular, Kane Hodder. Hodder reprises the role of Jason from Friday the 13th Part 7, 8, and 9. This was the last Jason film to be a part of the original canon and storyline, and is only followed by Freddy vs Jason and the reboot, Friday the 13th (2009).

Though this film is not very good, it was the first Friday the 13th I had ever seen. Jason X was released when I was eleven years old. Many of my firsts of classic 70’s and 80s series were the mediocre mid-range later sequels that came out during my pre-teens.

Recently, I began to binge-watch every slasher franchise from beginning to end. The Friday the 13th series has been one of my favorites (behind Texas Chainsaw Massacre and Scream) and I loved Jason X growing up. I hadn’t seen this terrible flick in over a decade though until earlier this year when I had begun my binge of the slasher genre. When watched in context with every other film in the series, Jason X feels like a desperate attempt at breathing life into a franchise that had already been macheted to death and chained to the bottom of Crystal Lake. The camp is heavy-handed and the “futuristic” costumes, props, and effects may have worked twenty years ago but they do not hold up too well now. This film feels the most like a Hollywood joke and not the horror slasher that can be so terrifying.

“Jason” vs. Jason vs. The Supernatural Jason

Spoiler for the original Friday the 13th Films

If you don’t know this by now, you were like me and had never seen the original Friday the 13th films. There is a distinct growth and evolution of Jason as a killer throughout the franchise, and in my opinion, certain iterations are far more enjoyable and terrifying than others. Right below we are going to go through a history of franchise killers, so if you haven’t seen any of them, be sure to skip to the next section!

The original Friday the 13th sees Jason’s mother, Mrs. Voorhees, as the actual surprise killer. This is the original form and version of the franchise.

It is not until Friday the 13th Part 2 that Jason takes over as killer, but he wears a burlap sack on his head. This version of Jason is pure murder and terror. It is not till Part 3 that Jason wears his famous hockey mask. Camp (no pun intended) and comedy begin to show in the series around this time, though they don’t dominate the vibes of the film. This iteration of Jason continues his murder spree until he meets his mortal demise in Friday the 13th Part 4. This version of Jason is the scariest to me as it is the most realistic and possible, with no supernatural elements, no comedic heavy-handed moments, but pure summer camp terror.

In Friday the 13th Part 6, we begin to jump the shark, as Jason is brought back to life from the dead.  From this point on in the series, Jason is unkillable and has supernatural abilities. In addition to this change in character, the tone of the franchise takes a shift from this entry on with more meta-humor and action elements being mixed in with the kills and horror.

The killer in Friday the 13th Part 5 was not anyone related to the Voorhees family but was a paramedic named Roy.

Here we are, in the year 2455 and in outer space. Somehow, Jason is still in one piece. He is thawed out and quickly begins stacking up the kills (which gets a section in a little bit). Overall, this is typical supernatural Jason, yet the victims seem even more dumb than normal. The horror is barely there, favoring a sleek and futuristic atmosphere over the dark looming woods of Crystal Lake that gave the original franchise its charm. Towards the end of Jason X, Jason is recreated by nano-bytes and synthetic material. This futuristic look is NOTHING like the hockey mask killer we have grown to love. This new metallic, stylized Robocop-esque Jason feels like a cheap gimmick and is not nearly as scary. Terminator already did it! If this was the future for the franchise, I’m glad this was the last in canon!

If you watch the Friday the 13th films it tends to be for one big reason, and that is the kills. The franchise also relies heavily on nudity more than your average slasher (and that says a lot). Like any franchise with 4+ entries, a big portion of the films range from below average to downright bad. This film ranks lowest out of all of them. Yes, the kills are still there, but it’s EVERYTHING in between that makes it so cringeworthy.

The film starts with an action sequence and five quick kills. This is all with supernatural Jason before he has been sent into space. The opening sequence does have a great spear-like kill of the scientist at the beginning played by THE David Cronenberg. Jason is played by the legendary man behind the mask, Kane Hodder. This great kill, cameo, and return of Hodder set the bar high for this film, but it descends quickly.

Overall, the rest of the kills are fairly one-dimensional and straightforward. There are two that stand out (outside of our opening cameo) and that is the virtual reality kills that feature both avatars and human players being sliced to death. The other kill that stands out is when Jason awakens in space. The explosion of Adrienne’s (Kristi Angus) face after being dunked in liquid nitrogen is a sight to behold.

Some of the kills are fun. The comedy is heavy-handed and it feels very cheesy and campy. This can be both a plus and a detriment. Most of the effects haven’t aged well, but there is a fun Virtual Reality segment. Overall I’d avoid this if you value your time, but it’s not the worst flick in the world.

Don’t. I mean, watch another Friday the 13th film instead of this one? #2 and #3 are my personal favorites.

All jokes aside, this flick is not currently on any streaming platforms, and I suggest you save yourself $3 from renting it on a digital platform. However, if you are a glutton for punishment or a completionist like me, and NEED to see it…

Thank you for reading! What are your thoughts on Jason X? Comment down below!

Join MovieBabble on Patreon so that new content will always be possible!

Its been years since i have last watched Jason X. I have vague memories of this being unashamedly stupid rather then some sort of cinematic bullet that needs to be avoided.

I totally felt the same way when I was reflecting upon it, till I re-watched it.. My belief is that if “bad” horror is what you are going for, there are COUNTLESS better and lower budget flicks that deserve your time. This isn’t completely unenjoyable, it’s just not quite enough to be put on a recommendation list (even if looking for a so bad its good flick)

The Friday the 13th starts poorly, then goes downhill from there and only gets good at Jason X. It was always a poor relation to Halloween and when it went supernatural it was too silly to be watchable. Jason X at least had the sense to realise it was stupid and leaned into it.

Oh man, I got to disagree about the first part. Yes, it was derivative of Halloween, but to say it was poor I feel is real harsh. The first 4 had a lot going for them, and were able to provide the gore / in your face side of things that Halloween didn’t. (Halloweens restraint is also what makes it special, but I don’t think that devalues F13th). I thought the first few actually had a sense of terror to them, Jason X feels like a studio was hired to make a camp spoof of it. Which is fine and fun, but not what I want all the time. (And if spoofy, campy horror is what I’m going for, there are a lot more I’d choose before this one). I agree the supernatural Jason was far too silly for me to enjoy as well!

What may have started as a poor relation to Halloween has done the leg work to provide enough originality and influence onto the horror genre to be considered now one of the cornerstones of slashers. Outside of Myers, Freddy and Leatherface, I think Jason would be fighting with Ghostface for spot #4.

‘The Rental’ is Well Worth a VOD Rental