Amazingly, RoboCop is celebrating its 30th anniversary this year, making it a prime candidate to be revisited and discussed.  A special shout out goes to coolcomix0221 for requesting to have the film reviewed.

RoboCop has had multiple sequels and rip-offs since it first debuted in theaters, but what makes it so special to so many people?  The following review will be spoiler free.

RoboCop is directed by Paul Verhoeven and stars Peter Weller as the title character alongside Nancy Allen, Daniel O’Herlihy, and Ronny Cox.

We follow Officer Alex Murphy as he tracks down a bunch of thugs who are causing racuous all over town.  Unfortunately, once he confronts the criminals, he’s shot multiple times and killed.  However, that’s just where his story starts as his body is used in a new, experimental program that fuses his body parts with that of a cyborg, making him the ultimate law-enforcing entity as RoboCop.

As RoboCop then takes to the streets to clean them up, he soon realizes that those in charge are not what they seem, causing chaos around the city. A funny turn of events caused the film to come about.

Edward Neumeier, one of the writers on the project, initially got the idea for the movie when he and his friend walked past a poster for Ridley Scott’s Blade Runner.  He asked his friend what the film was about and his friend exclaimed, “it’s about a cop hunting robots.”  At that instant, it clicked in his head to make a film about a robot cop.  Obviously it took some serious thought to create the general concept for the film…

It then took some serious discussion with the powers that be to make the film actually happen.  According to legend, Neumeier and the other writer on the project, Michael Miner, were stranded at an airport terminal along with a high-ranking studio executive which gave them several hours to pitch the film.

From that point, the beginnings of what eventually became 1987’s RoboCop took root. 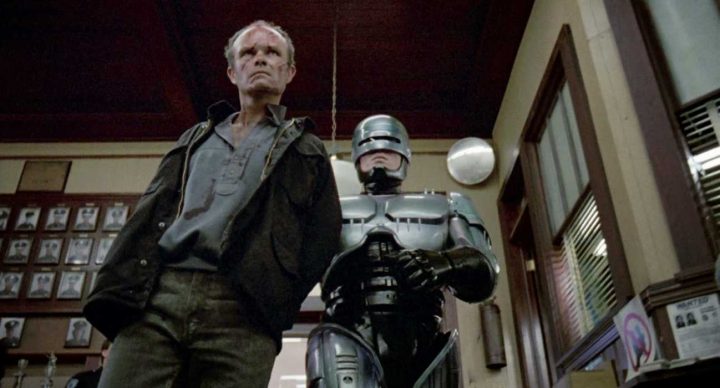 The best word to describe this film would probably be “insane.”  There’s really no rhyme or reason to Robocop‘s presentation.  There’s certainly some biting satire underneath its exterior (more on that in a second), but the film as a whole is shot with a serious laissez-faire attitude.  It’s almost as if Paul Verhoeven sat in his director’s chair and yelled “GO,” prompting each actor to go absolutely nuts on screen (he probably yelled “action,” but you get the idea).

Villains cackle with glee and people shoot their various weapons with reckless abandon.  Cars are even exploded with bazookas just for the fun of it.  All the while, there are bonkers television shows that can only be described as wacky.  In most cases, a movie with this many over-the-top elements would not work.  However, in RoboCop‘s case, there’s a feeling that every character is in tune with each other.  Each actor understands whether they need to be understated or crazy, balancing out the dynamic in such a way that still keeps the film absurd but never grating.

RoboCop is lightning in a bottle.  A film constructed as it is should not work.  However, there is just enough story and heart to keep the film from becoming all-out campy.

I’d be remiss if I didn’t recite the best line from the film… I’D BUY THAT FOR A DOLLAR!

But what makes the movie a true classic is its underlying satire.  From discussions of media influence to human nature, RoboCop runs the gamut of serious discussions that have an unbelievably fun twist.  Most of the time, you never even realize the examinations of social constructs.  Other than the obvious role to entertain and provide escapism, movies are clever ways to convey a message or create a dialogue.  The best films are the ones that are able to weave in some great discourse while still being a blast.  RoboCop is one of those films. 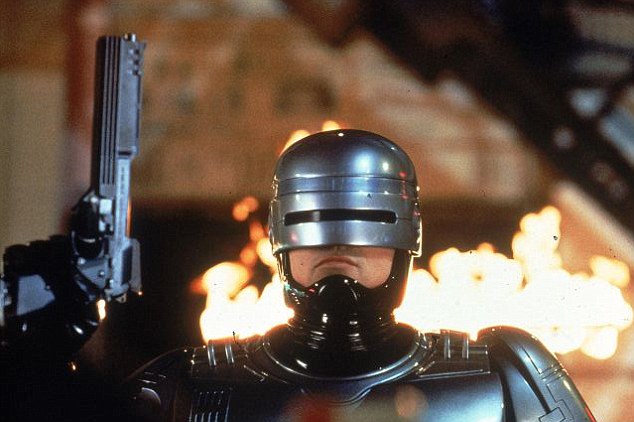 It is one of the few films that actually blends satire with philosophical questions.  Amidst men exploding from gunfire, there’s a great discussion of how the media can affect our perceptions as well as what it means to be human.  RoboCop is one of those movies that has a rough exterior but a soft inside, making it truly fascinating to watch.

When the action goes down, it goes down hard.  RoboCop pulls no punches whatsoever.  People are shot tens of times, some of which hit them in the crotch.  It gets quite brutal at times, but your heart is racing with every second.

With any older movie these days it’s easy to say that the effects just don’t hold up.  In RoboCop‘s case, that’s definitely true.  But, the action in the film continues to be resonant today because we care about Officer Murphy A.K.A. RoboCop.

Through all the carnage, we develop a natural bond with him, making all the action that much better.  We care about the fate of his character which builds the tension of each scene.  Because of our love for him, we cheer even harder as he blows baddies away with a pull of the trigger.

RoboCop is a bonafide classic in every regard.  It works as an action film, a comedy, and a drama.  The movie is never afraid to take chances, giving its audience a thrill ride that is unlike any other.  RoboCop is one of those films that is just incredibly rewatchable because it has so many different story beats as well as tones that all blend together in a surprisingly good way.  It absolutely deserves an A+.

If you haven’t yet seen this film then what exactly are you doing with your life?  Get to it! 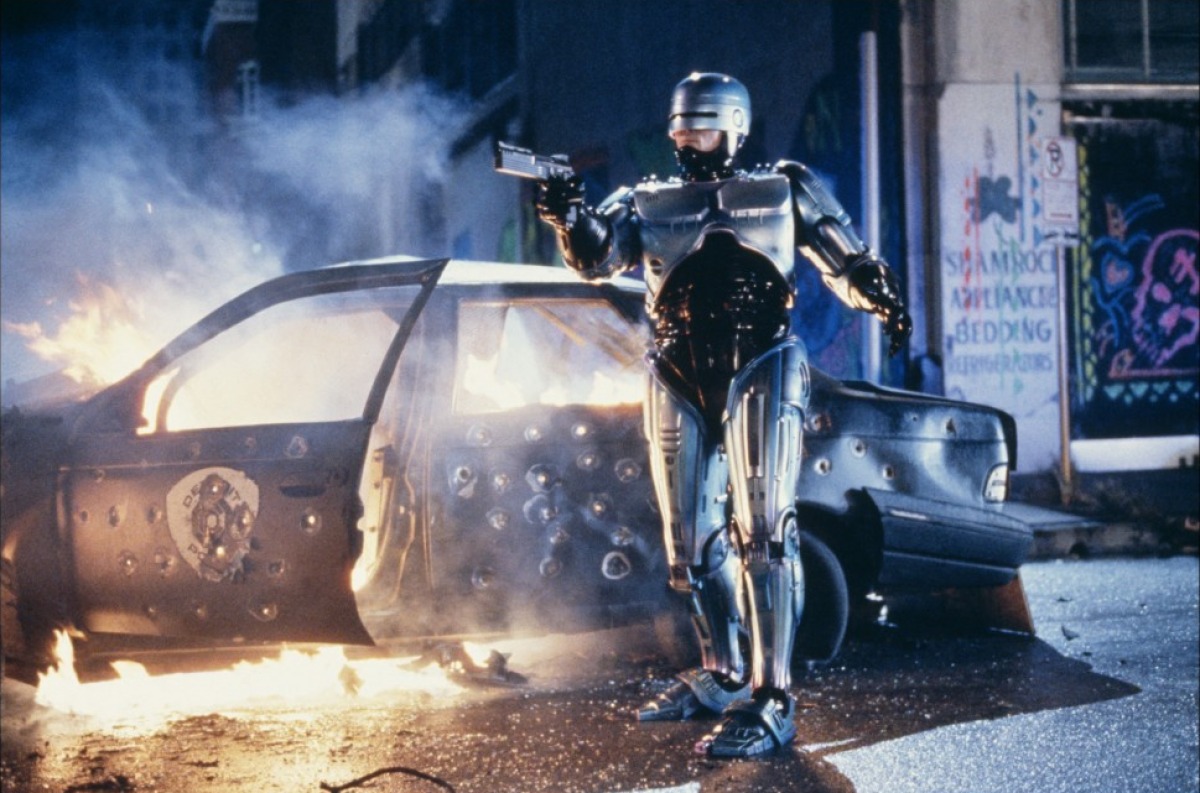 Thanks for reading!  What are your thoughts on RoboCop?  What movies do you want reviewed?  Comment down below!

It’s one of those films that even if you don’t unabashedly love it, there’s still something there to enjoy!

Thanks for the shout-out, Nicky Boy! “How tricks?” Anyway, if you feel like looking at the other three “less-than-critically-acclaimed” RoboCop films, then have at it. I just love how at only 1 hour and 42 minutes, it gets in, tells its effective story and then gets out on a high note! I would also like to check out “RoboDoc” some day. I’ve heard that it’s a new documentary about the film’s creation. I think it also delves into 2 and 3, so it’s some interesting stuff to check out.

You got it my man! I’ll have to check that out as well! I love inside looks into great films, sometimes they’re even more interesting than the movie.

Props must absolutely go to Peter Weller, who was required to convey so much emotion with just his mouth. And wow did he ever pull it off! With the posturing nothing but his lips alone, he was able to show confusion, longing, anger, anxiety, authority, sadness and despair. Not just any actor could have done that. A shout-out also goes to the late Miguel Ferrer, who epitomized the 1980s shot-to-power anti-yuppy, complete with cocaine and opportunistic malice. One more nod… Kurtwood Smith, a man who was so unlike his character that his wife (the woman whose desk-plate he sticks the gum on, Dick Jones’ secretary) had to pep-talk him into tackling his performance every day, and who delivered perhaps the best line in the entire film: “Bitches leave.”

You got that right! Every character has something memorable to them which is one of the best compliments you can give a movie!

Having reviewed the movie not too long ago over on my own blog, I could not agree with you more. This film is a true and timeless classic, featuring great acting, and ofcourse the underlying satire is terrific. My favorite part has got to be the ” Nuke em ” commercial. Terrific stuff. Really enjoyed your review. Thanks for sharing your thoughts on this great film ?

Thanks so much! RoboCop will forever have a soft spot in my heart for its absurdity. How can you not love it??

The problem I have found with Robo cop, is the ending. I’m like er okay is that it. There always seemed to me that there should be more…

Personally, I love the ending! Murphy finally gets recognized as a human again thus finishing the arc in the movie of what it means to be human. I definitely see where you’re coming from though it is rather abrupt!