Thirty Years Later, ‘A League of Their Own’ Is Still an Anomaly

A landmark film in an industry that still needs plenty more like it. 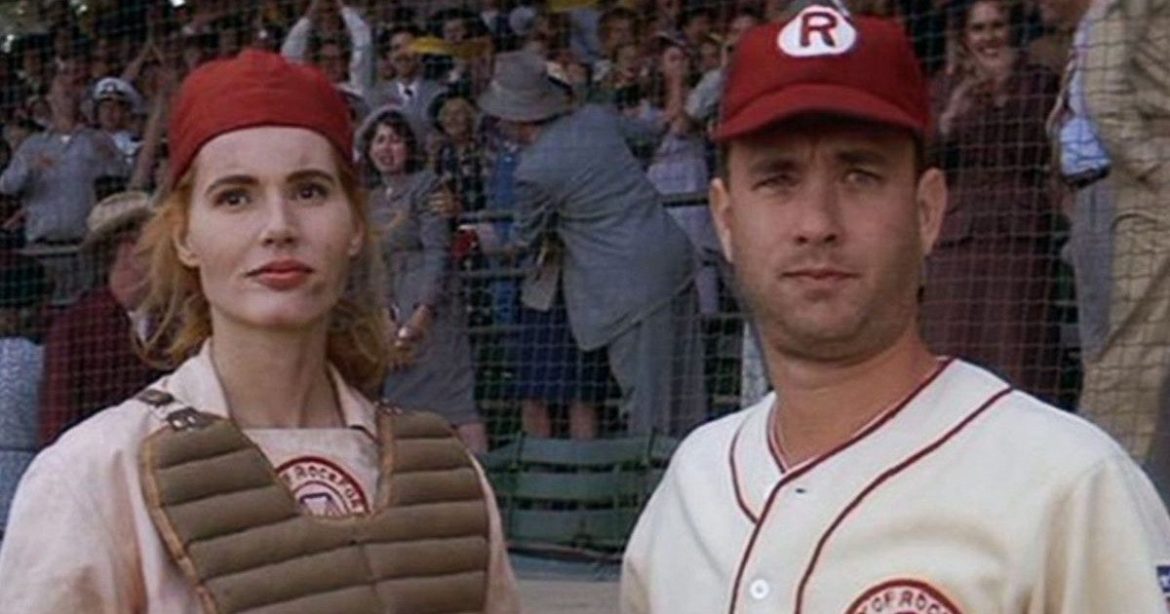 Thirty years ago, A League of Their Own hit theaters. Starring Geena Davis, Madonna, and Tom Hanks, it told the true story of the AAGBPL, an all-female baseball league that played in the lieu of the men who were fighting overseas during World War II. At the time, the movie was a massive hit. It was supposed to open the door to more on-screen female-based narratives that were based on more than love, marriage, and motherhood. “Supposed” is the keyword here.

Can There Be More Than the Token Female?

A League of Their Own was one of many sports films to come out in the 1990s. While many of them are reasonably entertaining, the female characters are generally boxed into traditional roles. The only ones that had prominent roles in which girls were part of the team were Little Giants, The Mighty Ducks trilogy, and, oddly enough, Space Jam.

What I find problematic in Little Giants is that Becky (Shawna Waldron) is only part of them because her father is the coach and he is desperate for players. She can play like the boys, but would likely not make the cut otherwise. I don’t mind the fact that she crushes on Junior (Devon Sawa). I get that she is a preteen girl feeling the first flush of romance. But I wish that had taken a back seat to her place on the team.

In Space Jam, Lola Bunny is also part of the team. She is also sexualized and romanticized as Bugs’s love interest. In my mind, it takes the wind out of her character. I would have loved to see her as just another ballplayer. Similarly in The Mighty Ducks, there are only two girls on the team: Connie (Marguerite Moreau) and Tammy (Jane Plank). Having two girls instead one was great, but I wish they were more of them.

A League of Their Own Was Expected to Open the Door

The thing about Hollywood is that once they see that a certain IP is successful, they do everything they can to replicate it. Like its sister film, Thelma and Louise (which also starred Davis), this one was supposed to kickstart a new era in which women would be given greater opportunities in front of the camera. Suffice to say that it didn’t. According to the Geena Davis Institute on Gender in Media, women still lag behind their male counterparts. Though opportunities are there, they are not as forthcoming as they are for men in the same position.

An article that was published in the LA Times in 1990 referenced a memo sent out by an unnamed studio head. It stated that all female-driven projects in which the character(s) were not love interests, significant others, or family members were to be “sidestepped”. It didn’t matter how much influence an actress, producer, or director had. Back then, male performers snagged 71% of the major film roles. This problem was made worse by ageism. Actors over a certain age were at the peak of their careers while their female counterparts started seeing a major downturn in the parts they were offered.

Thirty-two years later, the problem persists. According to statistics from last year’s box office numbers, women made up the majority of the movie-going audience. The problem is that even in 2022, the majority of movies and television are written/produced/directed by men, had men in the leading roles, and are reviewed by men. Women are still in the minority.

Though films such as Bridesmaids, Widows, and a few other notable outliers have proven that there is an appetite for female-driven films, they are still anomalies. Most projects coming out of Hollywood still have men in the lead role with women in either a limited part or traditional role.

The Relationship Between Dottie and Kit is the Narrative Hook

What makes A League of Their Own for me is the relationship between Dottie (Davis) and her younger sister, Kit (Lori Petty). Dottie is the perfect daughter, sister, ballplayer, etc. Kit has been playing second fiddle to Dottie for as long as she can remember. The scene in which Kit is being traded to another team and they argue gets me every time. I have a younger sister myself. I completely understand their dynamic and how long-buried arguments seem to bubble up at exactly the wrong time. I also love when they reunite at the end of the movie, it shows that they have a bond that can survive anything.

Unfortunately, it sometimes takes a generation (or more) to generate the change that is badly needed. After thirty years, the legacy of A League of Their Own is sisterhood, independence, and breaking barriers. It is a legacy inspired and continues to inspire females of any age to stand up and color outside of the lines.

Thank you for reading! What are your thoughts on A League of their Own? Comment down below!