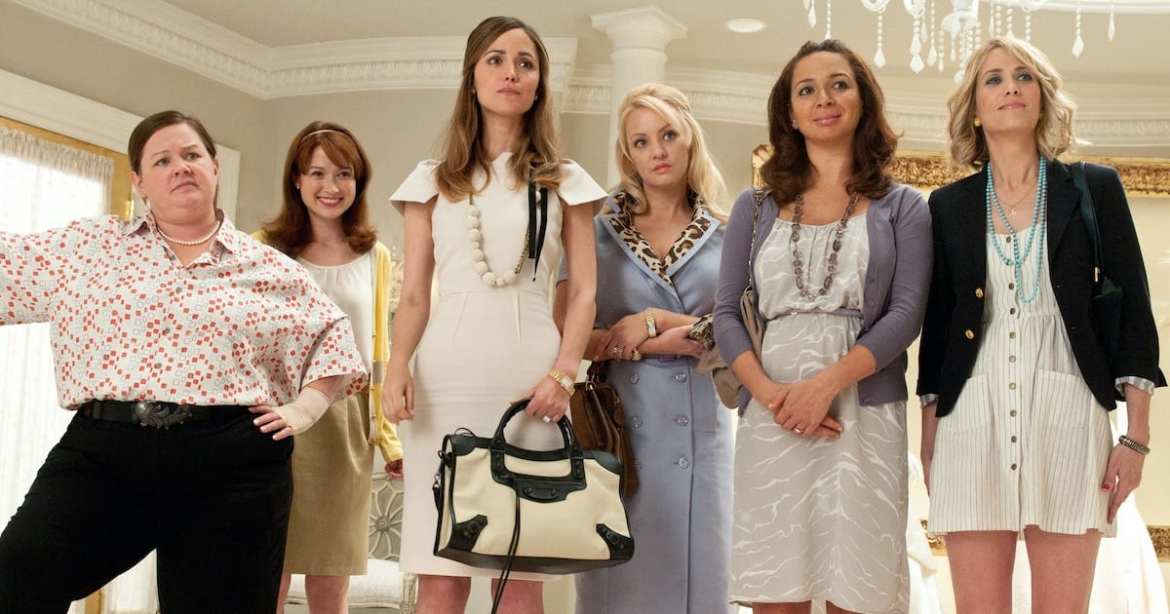 “CHICK FLICKS DON’T HAVE TO SUCK.” This quote from Movieline’s Jen Yamato was splashed across movie posters for Bridesmaids leading up to its wide release on May 13th, 2011. The marketing team must have loved the quote — it played perfectly into the film’s efforts to appeal to a wider demographic than a typical female-driven comedy. In fact, until Bridesmaids, more often than not female-driven comedies were almost always positioned as romantic comedies, and even then they were usually marketed as more rom than com. There was good reason for the marketing team to feel like they had to make sure people knew Bridesmaids was different. When you take that quote at face value, you’re left with a stark reminder of where we were a decade ago: asking if women were funny.

It seems hard to believe now, but just four years prior in 2007, Vanity Fair ran an infamous piece by Christopher Hitchens entitled “Why Women Aren’t Funny.” It was not parody. Hitchens goes on to ask, “Why are women, who have the whole male world at their mercy, not funny? Please do not pretend not to know what I am talking about.” At the time of the piece’s publication, Tina Fey’s 30 Rock was three months into its iconic run, Julia Louis-Dreyfus had won Emmys for performances in two different TV shows, and Kristen Wiig herself was carrying the institution of SNL on her back. Also, Carol Burnett, Jessica Walter, and Joan Rivers literally existed. So no, I don’t know what Hitchens was talking about — but let’s be generous and pretend that he was coming from a genuine place. If we entertain the notion that there was a time that existed when women in comedy weren’t funny — we’ll take that to mean in a style and format long-dominated by men — history will remember Bridesmaids as a watershed moment that smashed that perception.

No, Bridesmaids was not the first female-led comedy.

Nor was it the first to be funny. But it was unique; not only was it unapologetically broad in its humor and specific in its themes, but it also came stamped with the seal of approval of Judd Apatow, the reigning king of comedy films who made stars of men like Will Ferrell, Jonah Hill, Steve Carell, and Seth Rogen. His brand of comedy is ensemble-driven, a little raunchy in a testosterone-fueled kind of way, and tends to give way to a softer, emotional core in the films’ final acts. They may involve romance but rarely is that the driving plotline. Bridesmaids was a perfect fit for this film universe, except the focus just happened to be on women. Women who — like everyone — experience ebbs and flows in friendships, learn how to fail, and yes, sometimes shit their pants.

The film burst onto the scene like bad diarrhea (but like, really good diarrhea?) in 2011, earning $288 million globally. It garnered an Academy Award nomination for Melissa McCarthy, a Golden Globe nomination for Best Motion Picture — Comedy, and made household names of Wiig, McCarthy, and Rose Byrne. Most incredibly, over 60% of the audience was over 30 — a rare feat for a raunchy comedy. It seemed as though we were primed for a future of female-driven comedies, equal opportunities to tell smart, pitch-perfect stories for adults, and the end of the question Hitchens’ so boldly posed. In some ways, the past decade did live up to the promise of Bridesmaids. In other ways, it definitely did not. Let’s look at what expectations were following the film’s success, and where we are today.

Long the bridesmaids, we assumed this cast would finally get their star turns in Hollywood.

Wiig and Rudolph had charmed on SNL for years, McCarthy was known largely in television (Gilmore Girls and Mike & Molly), and Rose Byrne was a long-simmering talent with parts in prestige television (Damages) and modest hits (Insidious, Get Him to the Greek). When a film like Bridesmaids emerges — character-driven, ensemble in nature, and a major, genre-busting blockbuster — you naturally assume that the cast’s collective star power is poised to reach new heights.

If there’s a winner to be declared here, McCarthy is the victor going away. Her improvisational skills, physical comedy, and sheer screen presence carried her towards being hailed the breakout star of the film — and one of the major stars to emerge in the 2010s. When I say, “It’s coming out of me like lava”; you know what I mean, you know who said it, and you know where they were when they said it. Iconic shit (literally). Since Bridesmaids, McCarthy has had incredible highs (Spy, Can You Ever Forgive Me?) and some baffling lows (Tammy, Thunder Force). Even though her career hasn’t led to enough films that properly showcase her talent, there’s one constant in each of her roles since this film’s release: she’s the undisputed headliner.

For Rose Byrne, her post-Bridesmaids career has seen her largely stay the course. She’s mixed blockbuster superhero franchises like X-Men with Emmy-darling television like Mrs. America (where she was incredibly underrated in her portrayal of Gloria Steinem). Despite her versatile talent and her Hollywood looks, no one since Paul Feig has been able to fully utilize her skillset, particularly her comedic chops, except for…Paul Feig. Her role in Spy as aspiring villainess Rayna Boyanov, again opposite Melissa McCarthy, is simply perfection. I want more Rose Byrne, always.

Finally, there is Kristen Wiig and Maya Rudolph. As the best friends at the heart of Bridesmaids, they carry the film’s themes of female friendship and navigating life changes, on top of bringing their signature facial comedy and voice work to an already stellar script by Wiig. Their characters are so warm and accessible, and I think the relatability that is at the core of this raunchy, physical comedy is what helped to propel it to broad attention and acclaim. But neither of these women have gone on to maintain that level of mainstream success in the past decade, at least not at the center of a film the way they are in Bridesmaids. There has instead been a lot of (fabulous) voice work and supporting character roles. When they do star in projects, their selections have tended to be more niche (The Skeleton Twins, Barb and Star Go to Vista Del Mar, Forever) It’s hard to say if the success of Bridesmaids has afforded them the ability to be selective and pursue their passion projects, or if Hollywood thought lightning wouldn’t strike twice for these atypical leading actresses.

Undoubtedly, the 2010s ushered in a new era of female-led comedies in Hollywood. The rom-com wasn’t dead by any means, but female ensembles became far more common, and heterosexual romance wasn’t the driving force behind every film. Apatow brought us a few more projects that dealt specifically with issues faced by women (Girls, Trainwreck) and films like Girls Trip and Pitch Perfect were massive hits that carried forward the themes of Bridesmaids to different demographics (I’m sorry that this is the only place that I will be discussing Rebel Wilson and her breakout role in Bridesmaids. No matter how many times you hear the quote, “Put your American sausage in my English McMuffin” you are not prepared).

But for every one of those films named above, there was a Ghostbusters. Or a The Heat. Films that reveled in the novelty of a female cast, rather than stepping forward with something specific to say. Part of what made Bridesmaids so revolutionary was not its cast of women, but the fact that the film spoke to women. It spoke to life experiences and emotions with a specificity that brought relatability. Don’t get me wrong: it’s great to see women in the types of remakes and throwaway studio films that have long been a man’s playground. However, I want more of what Bridesmaids gave us — something deeply human and sincere, underneath the cum jokes.

So, after ten years, what is the legacy of Bridesmaids?

In the aftermath of a film that upends a narrative, like Get Out’s smash success or Parasite’s Oscar win, we want to feel as though nothing will ever be the same. In reality, progress rarely turns on a dime (especially in Hollywood). When Bridesmaids debuted, it was instantly a quotable classic, and definitively one of the best studio comedies of the 21st century. It should have taught studios to let women write about women, to seek out smart scripts that connect with people, and to give these stars parts that fully optimize their massive talent, for god’s sake! But it didn’t, not really. And with the modest encroachment of women into traditionally male genres came online trolls, targeted hate campaigns, and the ugly era of fanboy culture. And that 2007 piece by Hitchens, about women (and their lack of humor)? It’s still up, without so much as an editor’s note.

But none of that tarnishes the singularity of Bridesmaids; the brilliant physicality of McCarthy, the insane rock-bottoming of Wiig, or the deranged elegance of Byrne. It remains in a league of its own as a film that brutalizes its characters — putting them through every conceivable raunchy humiliation — while gently allowing them to be fully realized individuals. Like the giant cookie that crumbles around Wiig towards the end of the film, it celebrates the messiness of life to comedic and incredibly human effect. Upon rewatch this year, I appreciated those human elements more than I did ten years ago. But its humor hit me as if I was watching it for the first time.

On that same movie poster that featured Jen Yamato’s pleasantly shocked review of this “chick flick”, there was another review. It read, “Bridesmaids reaches levels of hilarity and heart that movies like these haven’t reached in over a decade.” Looking back on the past decade, I’d argue that movies — female-led or otherwise — rarely have since.

Thank you for reading! What are your thoughts on Bridesmaids? Comment down below!

‘Only the Lonely’: The Ideal Romantic Comedy That...