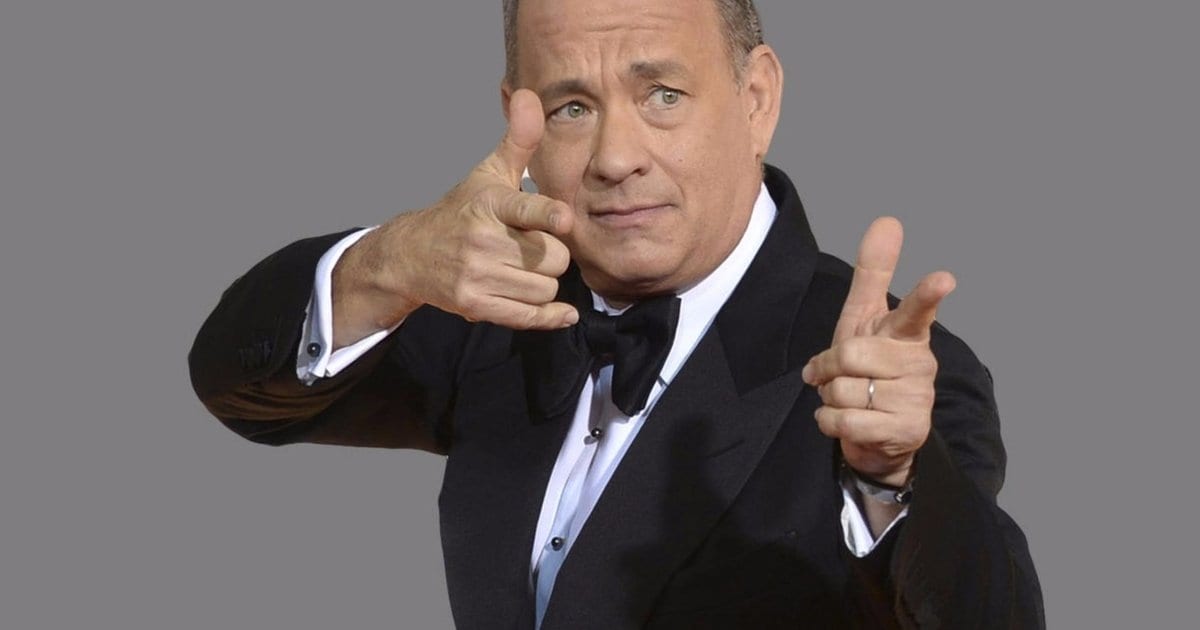 When people think of great actors, one of the first names mentioned is Tom Hanks. He stars in arguably more recognizable and classic films than any other actor. Even to the uncultured moviegoer, props like Wilson the Volleyball or quotes like “Houston, we have a problem” are known and loved. Additionally, many of Hanks’ films end up winning Academy Awards, like Forrest Gump, Saving Private Ryan, and Philadelphia.

However, that’s not the only reason people love him. Hanks has a lovable demeanor that endears him to audiences. His childlike performance in Forrest Gump or his sympathetic character in The Green Mile moves you to tears. He has that distinctive, high-pitched voice that everyone can instantly recognize. Personally, when I hear Mr. Hanks, the first thing I think of is Woody.

Off-screen he is a genuinely caring person as well. Many who have met him report him to be a kindhearted family man. This is apparent in his selfies with newly-married couples and his 28-year marriage to Rita Wilson (an unusual feat in Hollywood). He is the ultimate role model for millions of Americans.

In the Golden Age of Hollywood, James Stewart was that same genuine actor that audiences loved, much like Tom Hanks. Everybody went out to see movies like Vertigo, Rear Window, and Mr. Smith Goes to Washington. He was nominated for an Academy Award five times and won once in 1941 (The Philadelphia Story). His movies are still critically acclaimed today.

People loved to imitate his stuttering, drawling voice and admired him for his military service. He had a lovable demeanor, a distinctive voice, and was a genuine human being. The stories he told and the little cowboy ditties he sang were endearing trademarks of his person. He was also a family man with four children and wife of 44 years. He was one of the most well-loved actors of the century.

Both stars have similar film careers. They’ve both starred in numerous movies covering a wide range of genres. James Stewart went from comedy in You Can’t Take It With You to biopic in Spirit of St. Louis to almost an anti-hero in Vertigo. Likewise, Tom Hanks started with comedies like Big, starred as almost an anti-hero in Road to Perdition, then starred in biopics like Sully.

Both actors were also prominent guests on variety shows such as SNL and The Dean Martin Show. Audiences loved them for their easy sense of humor and entertaining anecdotes. Who could forget Tom Hanks’ portrayal of a very blunt white man on Black Jeopardy or James Stewart at the beauty parlor with Dean Martin and Orson Welles? Because of their appeal, audiences clamored for their regular appearances on these shows.

Both continued acting in their old age. Stewart was in his 80s before he finally quit acting. Meanwhile, Hanks is 61 years-old with no signs of slowing down, recently starring in The Circle, a thrilling corporate sci-fi and The Post, a drama detailing the true events of the Pentagon Papers and The Washington Post.

Both often end up in rankings of the top-10 best actors.  Their names are recognized and praised by critics and moviegoers the world over. Additionally, their movies often end up among top-10 rankings (such as Saving Private Ryan or Vertigo) as well. Both actors tend to wow critics, even years after the release of their movies.

On the Same Level

Tom Hanks and James Stewart share the highest tier in Hollywood. They both have a strong presence on and off screen, endearing themselves to audiences with their distinctive voices on screen and their undisputed kindness off the screen. They both have starred in many different genres and hold an enviable level of prestige in their careers of which most actors only dream.

Indeed, history repeats itself, showing us that good actors never really die–there will always be another prodigy to carry on the legacy.

Thanks for reading! What are your thoughts on “Tom Hanks is the New James Stewart”? Comment down below!

What movie topic should I discuss? Whether it be old or new, the choice is up to you!

[…] Philadelphia Story brings together some of the best actors of the time — Katharine Hepburn, James Stewart, John Howard, and Grant–for an uproarious story about Tracy Lord (Hepburn), who is must […]

I know I love both their works. But I think you’re right – in this era Tom Hanks has the sort of charisma, screen presence and filmography that James Stewart once had. Interesting piece.

Never really thought of Hanks as Jimmy Stewart-like before, but you make a compelling argument!

Never thought of the similarities before, but I’m more than pleased to see two nice guys finish first :)

I’ve thought exactly that for a number of years so you’ve hit the nail on the head for me. The only difference for me is that Hanks is sexy and Stewart wasn’t!

I argue for the opposite. :)

I’ve said it before, and I’ll say it again- Hanks would make a fantastic Bond villain. He’d be brilliant, like Henry Fonda in Once Upon A Time in the West, cast shockingly against type. It’d have to be a good Bond movie, mind, but as a charming villain Hanks would be something else.

Never thought about that before but you’re completely right. Though I’d probably have a hard time at first accepting it, Tom Hanks would definitely make a great villain.

You know what? Honestly? Thank you for this. My brother & I had an argument over exactly this during Christmas. He claims that Ryan Gosling is the new Tom Hanks and didn’t really know who James Stewart was. It was the kind of sibling discourse I couldn’t let go.

Glad I could be of service! It’s always good to be right :D For the record, I think Ryan Gosling would be more of a Marlon Brando type.

Love this!! I had never thought about how similar Tom Hanks and Jimmy Stewart are but it is so so true!!

I didn’t either until I really started going through James Stewarts’ filmography. It’s crazy how we kind of cast our actors into these types that we can identify through film history.

Totally agree! He’s so lovable and such an amazing actor… he’s a king!

I’ve always thought of Hanks as America’s Dad. I think many thought of Jimmy Stewart the same way!

That’s a perfect way of putting it!