If you’re as obsessed with true crime stories as I am, you know the frightening concept of regular people suddenly turning homicidal. In some cases, we could have seen it coming. A past riddled with indications of sadism. Earlier indications of mental health issues. But occasionally, people just break bad. Their friends and families are baffled. They would tell the authorities that he seemed like such a gentle soul, he didn’t seem like the type of person who could have done something so terrible.

In Unhinged, the antagonist represents the ‘regular joe’, a suburbanite who suddenly lashes violently against the world around him. One bad day was all it took. A sudden betrayal by a loved one. The realization that the treasures he desires will always be out of reach. One brutal act of violence. And now, as Bill Foster from Joel Schumacher’s Falling Down laments, he has become the bad guy.

We are introduced to “The Man” (Russell Crowe), who sits outside his ex-wife’s house, breathing heavily, distraught. We know it’s his ex-wife’s house because he takes out his wedding ring and throws it in the backseat. After mustering up some courage, he takes out an ax from the trunk of the car and uses it to hack on his ex-wife’s front door. When her lover opens the door, The Man brutally splits his head open. He enters the house. We hear his wife screaming inside. After he’s finished murdering her, he burns the house down and drives into the night…

The following morning, we are introduced to single mother, Rachel (Caren Pistorius). On her nightstand, we see a self-help book detailing how to parent a child during a divorce — one of the script’s numerous subtle scriptwriting touches. She lives with her smart-alecky son, Kyle (Gabriel Bateman), her brother, Fred (Austin P. McKenzie), and his girlfriend, Mary (Juliene Moyer).

Rachel is having a bad day, as she overslept and missed out on a work-related appointment, which leads to her getting fired. While receiving the bad news, she’s also gets stuck in traffic with her son in the backseat, whose now late for school.  During the drive, her estranged ex-husband disappoints her son once again, as he’s seemingly more focused on his career than parenting.

When she angrily honks at a grey pick-up trick for standing still in front of a green light, things will only get worse.
The driver of this pickup truck is none other than The Man. The Man follows Rachel’s car and politely requests an apology for her rudeness. As you would expect, she dismisses him entirely, which reignites his homicidal rage.

Thus begins our unhinged road rage odyssey. Everyone close to Rachel, be it friend or family, is now in mortal danger as The Man will go to extreme lengths to teach Rachel the importance of civility. 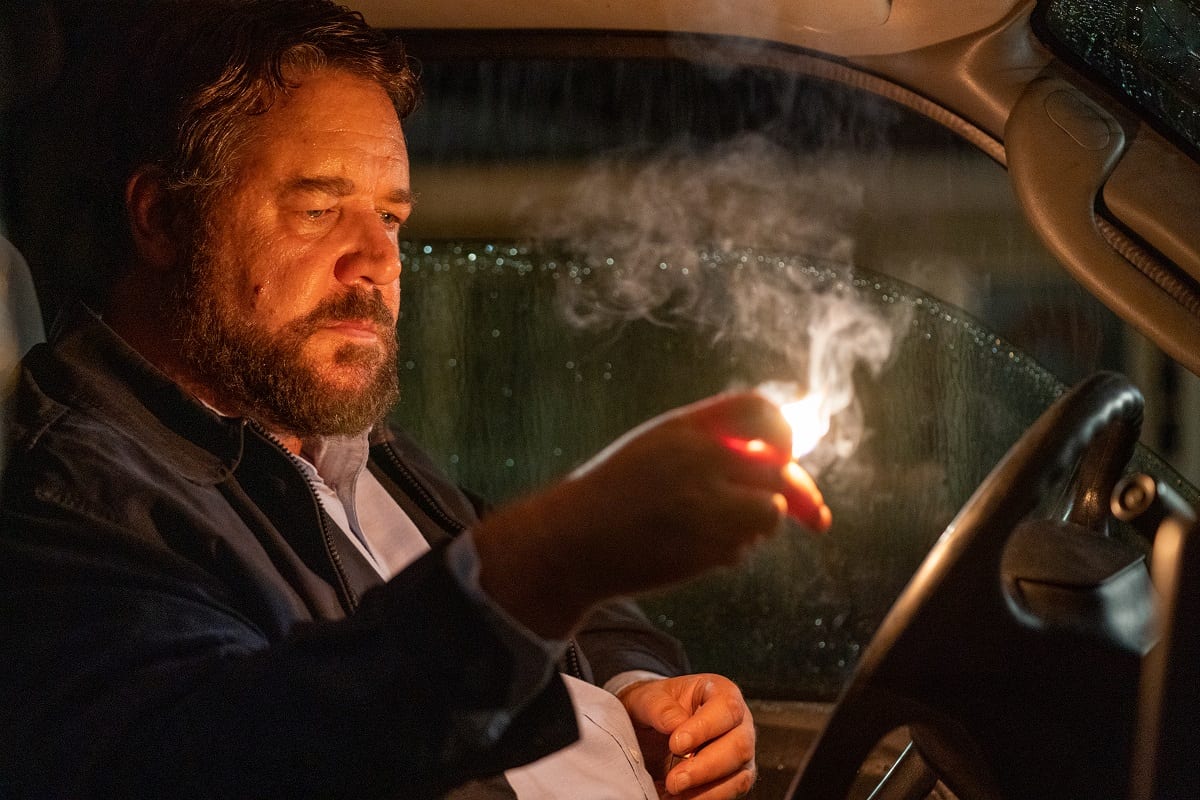 The violence in Unhinged is surprisingly brutal for a mainstream film. While it shies away from turning into an exploitation thriller, you will still see loads of people getting dispatched with manic glee.

At times, the violence gets a little cartoony. One particular car chase scene threatens to pull the movie away from any semblance of realism. Even so, the sudden violence did add significant tension to the film. We realize that The Man is not to be underestimated and that he’s willing to go extreme lengths to prove his point.

The script by Carl Ellsworth, though it does feature some well-crafted scenes of dialogue and action, does have a few annoying habits. There’s the case of some obvious exposition, especially in the first act when we are introduced to Rachel and Kyle. Though the film does leave some mystery to the background of its antagonist, we are spoonfed information about our protagonist. A lot of it could have been left out. If the characters are likeably portrayed, the audience can figure out the rest sometimes.

Most notably, however, there’s some extremely obvious foreshadowing. Without going into specifics, if you pay a modicum of attention, you can guess what will eventually play a part in the eventual climax. Foreshadowing is not necessarily bad, but it should never be too obvious. Unfortunately in the case of Unhinged, it’s extremely obvious.

The versatility of Russell Crowe cannot be denied. Here’s an actor that has excelled in multiple genres. He’s proven himself in the action genre, as a romantic leading man, as a comedic sidekick, and as a capable dramatic actor; however, his competence in the musical genre is rather controversial.

His role in Unhinged is a far cry from the masculine heroics of Gladiator, arguably his most famous role. In fact, as some reviews have stated, the role seems to exemplify toxic masculinity. A man who turns psychotic after being cuckolded. You could see this character listening to the whimsical bigotry of Rush Limbaugh, critiquing PC culture, and lamenting the loss of traditional gender roles. At the same time, his grievance against Rachel (maybe not the extent of it) is understandable. She was the one that was rude to him and should have apologized. A little politeness could have prevented a significant amount of carnage.

Crowe seems to be having a blast in the role. This is a heftier, rather gargantuan Russell Crowe. At times he’s both threatening and darkly hilarious. Crowe goes deliciously over-the-top but just stops before becoming a full-blown cartoon. 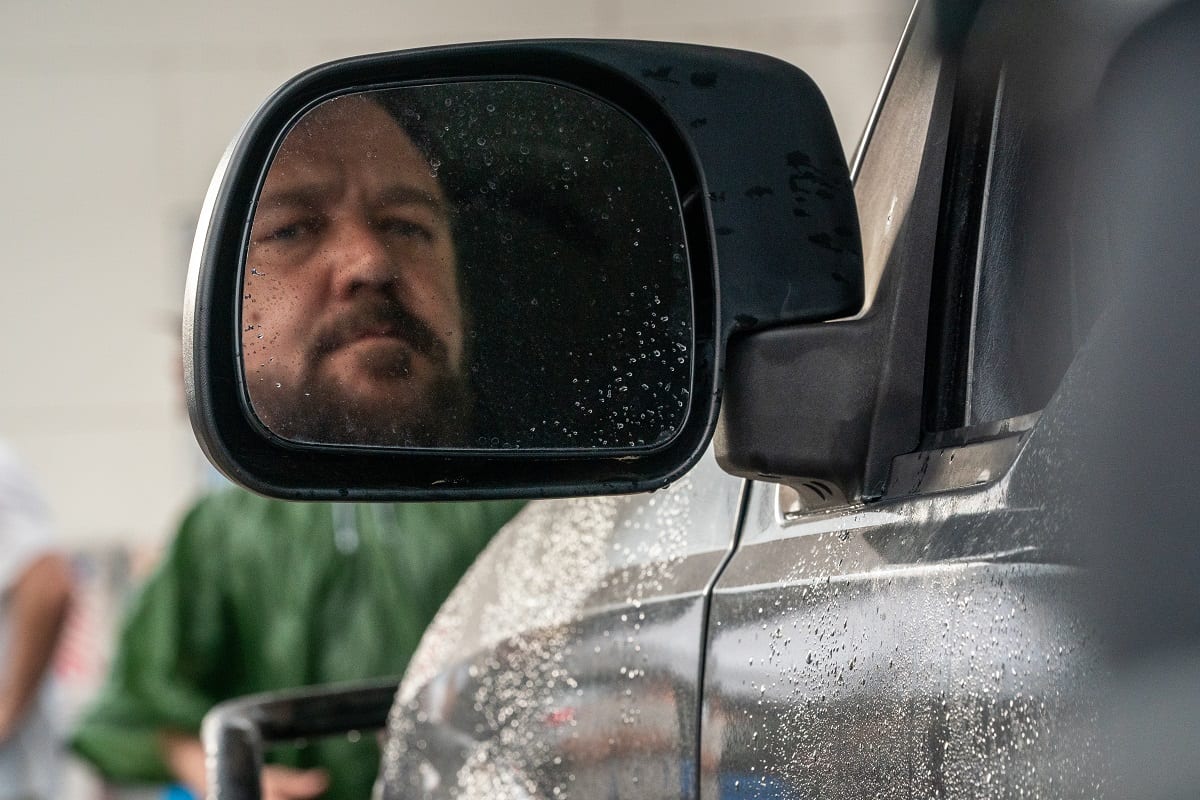 It Works as a Genre Piece…

Unhinged could have gone down a similar route as Joel Schumacher’s nineties masterpiece. Unfortunately, for all its entertainment value — courtesy of Russell Crowe as the ‘unhinged’ subject of the film — it doesn’t seem interested in delving deeper into the fractured psyche of its antagonist. We never get a chance to sympathize with him. We already see him go ballistic in the opening scene, so we know we are dealing with a full-blown psycho. We only get a small glimpse of fragility when he’s asking for an apology to Rachel, but not much else.

The film does seem to hint at something deeper, a rumination on the random violence that plagues America. The anxieties of ordinary life, how it can drive us insane. A montage in the opening credits shows real-life footage of road rage and street fights.

This all feels rather service level. Lip service to deeper thought to what’s essential, a generic, if highly entertaining thriller.
It’s certainly no Falling Down, but it doesn’t need to be. Although, it’s not worth endangering your health if you’re considering seeing it in a cinema.

The strength ultimately lies in its popcorn entertainment, nothing much more. The sudden bouts of shocking violence are something you don’t regularly see in mainstream films. Its neat running time of 90 minutes means the film never overstays its welcome.

Thanks for reading, and listening! What are your thoughts on Unhinged? Comment down below!

[…] has been raised on a Christian mission and is now called Tommy by the missionaries who raised him (Caren Pistorius and Ryan Corr). But he discovers that his uncle and mentor, Baywara (Sean Mununggurr) is still […]

[…] another that’s all rage; one that’s pure libido; a version of Ethan with all his psychotic tendencies, and so on. And here’s the catch: each of these sections takes over Ethan’s […]