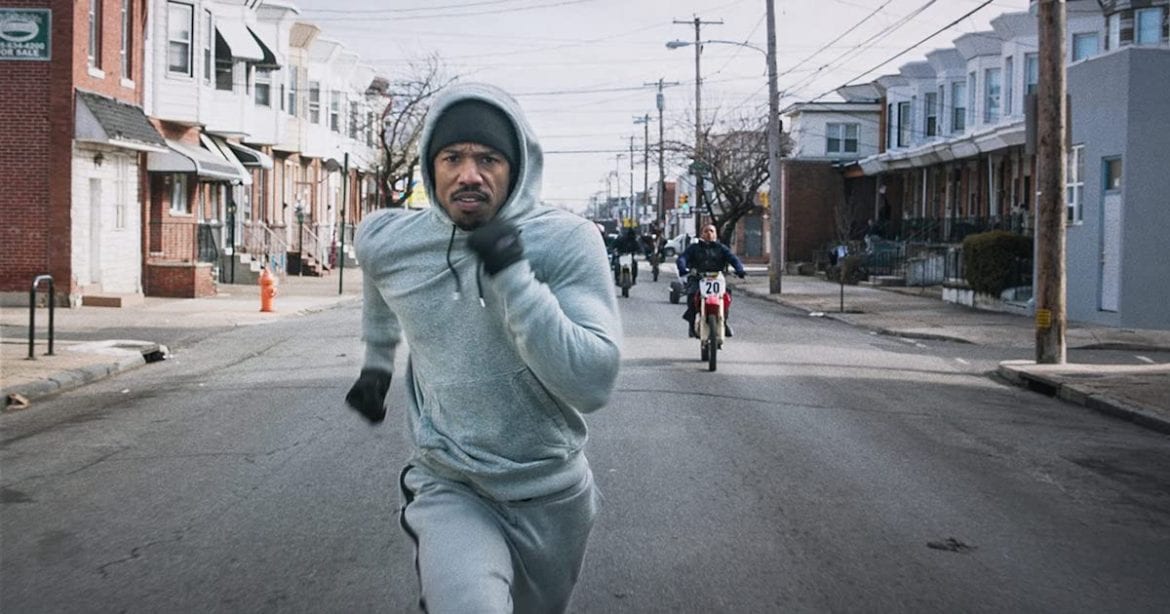 Read our discussion of Bleed for This here.

If someone were to come up to me on the street and say, “Hey, you! What are the best blockbusters of the 2010s?” I would first say back, “That’s a very strange thing to ask someone randomly!” But then, I would immediately exclaim (in no particular order), “Mad Max: Fury Road, Mission: Impossible – Fallout, and Creed.” Each, while incredible in their own right, are perfect examples of how to continue to franchise or reinvigorate it after we thought it was far beyond its expiration date.

The 7th film in a franchise that was already on spinning its wheels mightily — and a spin-off no less — should never work. It’s nothing short of a tiny film miracle that Creed is successful as it is. It’s the perfect update of a franchise that had already had done so much for the culture at large.

The Rocky franchise holds a special place in my heart. I grew up in the Philadelphia area, and with this collection of movies. I’m a little embarrassed by the number of times I’ve watched the completely self-unaware training montage in Rocky IV… In any case, I consider Creed the best sequel in the entire franchise; realistically, the only item differentiating the original Rocky from Creed is its cultural significance. Despite how great Creed is, I can’t imagine Adonis Creed getting his own statue next to the Philadelphia Art Museum any time soon.

Creed is a great modern example of a movie catching lightning in a bottle. The predominant feeling leading up to the film was “boy, I really hope this doesn’t suck”, given that the Rocky franchise seemed to be over and done with after Rocky Balboa. I’m routinely impressed by what a great job Ryan Coogler did in rewriting this franchise.

Additional stat: 140 — the number of times I said “HOLY SHIT” while watching Creed in theaters (approximately).

Michael B. Jordan and Tessa Thompson are two of my favorite actors working right now, so yeah, the cast ain’t bad. Jordan has an unmatched level of intensity as an actor; his yells are ferocious, and his physicality is outrageously impressive. So what better role for him than a boxer! I adore everything about his Adonis Creed, from his cockiness to his child-like excitement. I consider Tessa Thompson one of the best actresses working today. Also, I was in the same conversation with her at Sundance 2019, so we’re basically best friends.

Stallone has always been a self-mythologizer, famously embellishing his involvement in many artistic creations, but even so, I love him as a movie star, and his work in Creed is some of the most vulnerable in his entire career. I’m still very bitter Mark Rylance stole his Oscar for this movie. I don’t think I’ll ever be okay with it.

And shout out to Phylicia Rashad, who makes everything better.

It’s time to praise Ricardo “Padman” McGill, Creed’s mitt trainer. One of the best aspects of Creed is how the film is populated with real boxers and has a great eye for sport authenticity, which Creed II continued a few years later. The training and fighting scenes are meticulously crafted, in large part thanks to the hand speed drills Adonis goes through with Padman. Surely, Michael B. Jordan deserves a lot of credit for his training in preparation for the film too, but Padman’s experience as a real-life trainer adds plenty of believability to Adonis’ movements. Plus, he looks damn cool while he does it!

(Second place goes to the masterful one-take match against Leo “The Lion” Sporino. I don’t care that I can tell where each hidden cut is, it’s an awesome example of how to tell a story within an action scene.)

No Way, They’re in This?

I always enjoy watching Andre Ward’s scene as the fictional boxer Danny “Stuntman” Wheeler, but I’ve got to with Michael Wilbon and Tony Kornheiser! They’re so great in their fake PTI segment discussing Adonis. Normally, the cutaway, fake ESPN/fictional sports network segments in sports movies are so stilted and terrible, but Wilbon and Kornheiser are fantastic in Creed, mostly because they treat Donnie as they would any other leading topic on PTI.

What I Would Take Out

There will be no “Bianca’s music is terrible” slander here. I stan.

I was very tempted to just paste the montage video again. Very tempted. Instead, I’ll use this section to explain why I love it so much.

While no montage may ever pass the original Rocky‘s in terms of cultural significance (perhaps Battleship Potemkin has something to say about that too), Creed‘s montage might be my favorite.

One requirement of every movie in this franchise is a training montage, but never has one ever been jammed packed with as many elements as Creed’s:

All of that is in less than five minutes. And yes, the training clips are top-notch and the editing is outstanding as the film cuts coherently between each facet. But every piece of this montage signals that Creed is about much more than just Adonis, but about everyone rallying together for a good cause. It’s also really funny in parts, with Rocky muttering how Adonis should be doing one-armed pushups and how the nurse might drop him while he’s shadowboxing.

But let’s not forget Ludwig Göransson’s unbelievable score and remix of the classic Rocky theme, which has the power to bring you to tears if you’re in the right mood. This leads to Meek Mill’s appearance in the second half of the montage. Is Meek the best rapper around? Absolutely not. But he is a great motivational rapper. Meek Mill is also a fantastic inclusion with the Rocky franchise being a distinctly Philadelphian franchise, and him being the most prominent Philadelphian rapper.

It has to be Ryan Coogler. The Rocky franchise was dead until Coogler approach Stallone with this script idea before directing Fruitvale Station, eventually badgering Stallone enough to get him to agree to the project after Fruitvale proved incredibly successful. Rocky might be Stallone’s baby, but Creed is Coogler’s.

I adore everything about the Rocky franchise, everything from Rock’s humble beginnings as a down-on-his-luck everyman to the unintentional hilarity of everything in Rocky IV. Well, Rocky V does indeed exist, so maybe not everything. But more than anything else, this franchise needed a fresh perspective. That’s why I love the quote from Richard Brody I shared above; it’s entirely true.

I always buck against the criticism that Creed copies Rocky. Sure, they have the same general arc in terms of plot: a boxer rises the ranks, has a few sick training sequences, and wins in life even though he loses the final match. But condensing it down those points robs Creed of what makes it great, primarily in building a community and detailing the Black experience, something the franchise struggled with for years and never acknowledge much at all. (Apollo is literally teaching Rocky how to be more Black in Rocky III to beat Clubber Lang.) That’s not to say I find Rocky problematic (I don’t at all), but Coogler uses the formula to tell a different story, much like he did a few years later in Black Panther.

And THEN some! Creed is the kind of movie that is so filled with emotion, high-octane sports action, and stirring musical stings, that you’re almost exhausted by the time it’s over. But not to the point where the film because nauseating. Rather, you are entirely satisfied, and you can’t think of anything the film didn’t supply.

Thank you for reading! What are your thoughts on Creed? Comment down below!

[…] chasing that sweet taste of victory one last time. It’s a tried and true formula for sports films that while riddled with cliché is always an inspirational crowd-pleaser that makes audiences stand […]

At the very least, Stallone did win a Razzie Redeemer Award for his performance. It’s continued proof that with solid writing and a steady-handed director, Sylvester is a good actor. If anyone got robbed of awards, then it’s Michael B. Jordan. At the very least, he should have gotten an Oscar Nomination. However, this movie was unfortunate to have come out during the time when “#OscarsSoWhite” became a trending topic. Either way, Ryan Coogler is a director on fire right now. With three solid films under his belt (and all of them involve MBJ in some way, shape and form), his flames are white-hot and it should be interesting to see what he has in store.

It’s funny, I just watched Death Race 2000 for the first time last night and I adored everything Stallone was doing in it — his performance in that is probably the exact opposite of what he’s doing in Creed, which is almost another way of proving your point of how talented he is. 😁

I can’t wait for what Coogler has in story for us, especially after BP2 when he’ll probably be one of the most powerful directors in Hollywood. Pretty cool to think about!

Maybe you can recommend Death Race 2000 for the next Quarantine Pick.

Who knows, maybe I will 😉

An Injustice in Storytelling: ‘Just Mercy’ Drowns Its...