Billy Eichner makes the leap from the street to the big screen and breathes life into the classic rom-com. 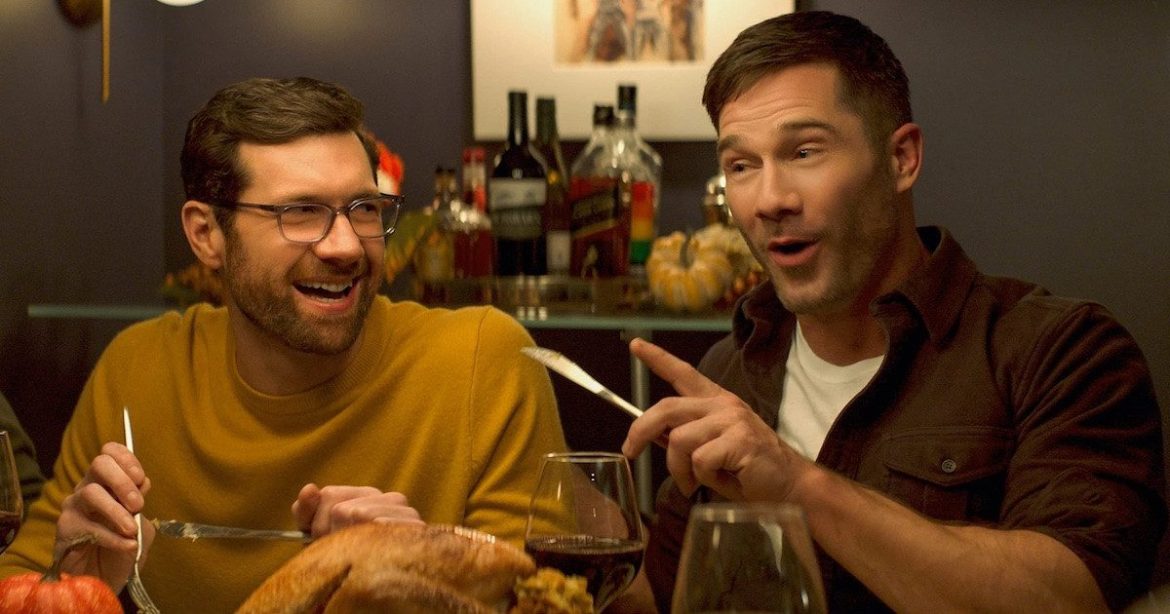 “It wasn’t easy, but it’s worth it”. These words from co-writer and star of Bros, Billy Eichner, in his Q&A after its Melbourne premiere screening resonated with a thundering echo. Not just in terms of the difficult and stressful process of getting a movie made to begin with, but more so about the bigger picture. Speaking on the film’s mission of inclusivity, Eichner stated that the LGBTQ+ community is often presented as a monolith and the need for representation was so vital to the film. Because a queer-centric romantic comedy produced by a major studio where every cast member (excluding the celebrity cameos) is an openly LGBTQ+ actor does seem like ground that should have been broken long ago. But Bros is a hilariously satirical, yet genuinely sweet romantic comedy that feels like an invigorating breath of fresh air into a very rigid genre.

In his first leading role, Billy Eichner plays Bobby Lieber, a gay man pushing 40 living in New York City. His professional life is going well; he’s a successful podcaster, a curator for the world’s first soon-to-be-opened National LGBTQ+ History Museum in Manhattan, and he’s received an award amongst the New York gay community for “Best Cis White Gay Man.” Romantically, however, Bobby seems overly content with being single and the random, anonymous hook-ups that come with it. That is until he’s introduced to Aaron (Luke Macfarlane), a handsome, country-music-loving lawyer. Despite an awkward first encounter that fails to produce any sort of spark, Bobby and Aaron begin to hang out with each other regularly. Over time, these men both plagued with commitment issues begin to make a meaningful connection.

Bros shoots for the moon with its ambitions; creating a sincere romantic comedy with a good dose of satirical jibes towards the genre itself and cinematic representations of the LGBTQ+ community, but also creating a film made for those of all sexual orientations that also has not been compromised or watered down to make it palatable for a “straight audience.” Against those odds, Bros majestically sticks the very tricky landing and does so without any inflated sense of self-importance. All you can ask of a comedy is for it to be funny, and Bros delivers on the gags that come at you a mile a minute with an impressive hit rate. Jokes that lampoon virtue signaling, sexting, Lifetime and Hallmark movies, and even a spectacular cameo from Debra Messing that cleverly plays with her status as a gay icon will have audiences howling with laughter. Producer Judd Apatow’s fingerprints on the project are evident, with the film’s easygoing feel with humor and dialogue that strikes a nice balance of clever and witty while never feeling inorganic or overwritten. But, it also has the same pitfalls as most Apatow productions where the momentum stalls at the beginning of the third act and everyone has to be sad for 15 minutes.

Romantic comedies live or die by the chemistry of their leads, and Eichner and Macfarlane have it in spades (a fact that was also very evident in their Q&A at the premiere). Eichner dials down the impulsive, manic comic persona Billy on the Street made him famous for and he brings a more subdued performance to Bobby, but still has a semblance of his trademark nervous energy. His schtick does toe the line of annoyance at times, but he’s a charming and likable screen presence and his sizzling chemistry with the equally charming and likable Macfarlane makes the film pop. It’s clear that much of the script is taken from Eichner’s own lived experiences, which makes a monologue where Bobby recounts the hardships and discrimination he has faced and how his parents didn’t live to see the person he has become so moving. For a film with a joyful and upbeat portrayal of LGBTQ+ people that sideswipes a lot of queer-centric media that depicts them exclusively as subjects of abuse, trauma, and shame (done excellently so with the fake Brokeback Mountain-esque film, The Treasure Inside that Bobby and Aaron see on a date), it makes these moments of raw emotion hit even harder.

While Bros for better or worse follows the classic rom-com blueprint very closely with a healthy injection of the Apatow DNA, when it nails the formula this well with a generous sprinkling of self-reflexivity, what’s not to enjoy? It’s hard not to sit back, relax, laugh, and maybe even swoon at one of the best studio comedies we’ve seen for a while. So bask in this warm, wonderful celebration of inclusivity that despite its disappointing box office performance stateside hopefully won’t discourage more films of its kind to emerge.

Thank you for reading! What are your thoughts on Bros? Comment down below!