‘The World to Come’: Hope in a Harsh Reality 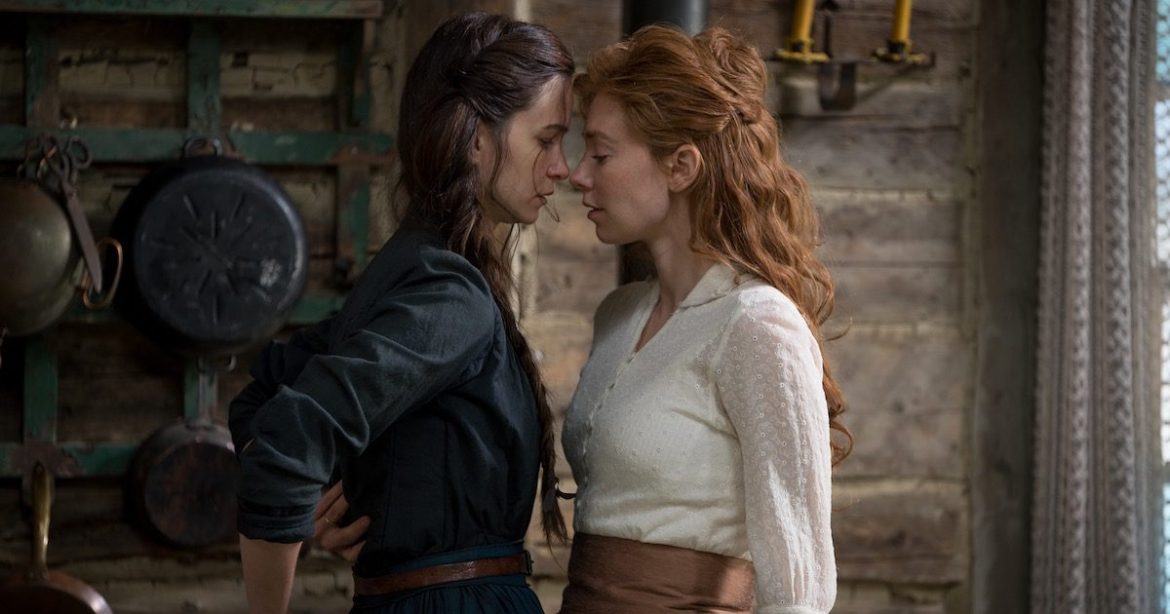 I feel bad for period lesbian romances in a post-Portrait of a Lady on Fire world. How can you possibly match up to a film that basically perfected the love story? (I found myself thinking about page 28 the other day — it was a good day.) On the flip side, it’s wholly unfair to compare every LGBTQ period romance to Céline Sciamma’s masterwork. Two women falling in love while wearing petticoats can take on so many beautiful forms.

Mona Fastvold’s The World to Come certainly has a few familiar trappings of the subgenre, but it forges its own path with delicate direction, lyrical presentation, and plenty of emotion.

Contrasting the Tragic and the Beautiful

The World to Come begins with a journal entry: Abigail (Katherine Waterston) mourns the death of her infant child to diphtheria and reflects on the cruelties of her life. She also remarks, “with little pride, and less hope, we begin the new year.” Also, the water immediately froze on the potatoes she was trying to wash. The year is 1856, and everything seems vicious and uninviting. Her relationship with her husband Dyer (Casey Affleck) is distant. Seemingly the only thing on his mind is conceiving another child, but Abigail frequently declines, sighting she isn’t over the grief of the baby she recently laid to rest. Even so, a new year begins, and Abigail trudges forward, hoping to make something of her existence.

Then comes new neighbors, Tallie (Vanessa Kirby) and Finney (Christopher Abbott), who move in at a house on the hillside. Abigail and Tallie instantly lock eyes, with Waterston and Kirby playing the moment to subtle perfection. Their first encounter is a truly swoon-worthy meet-cute.

But Tallie has her own struggles at home. While Dyer is mostly cold and unfeeling, Finney is full of rage and a lot of alcohol. His views of Tallie are more in line with a servant than a wife. She is often criticized for not tending to all of his “needs” and not being able to provide him with a child. Finney is yet another indelible character in Christopher Abbott’s filmography to be an enraged psychopath. (Abbott is one of my favorite actors right now, but can someone put him in a rom-com or something? The guy needs a break.)

By this point, Christopher Abbott is more than happy to play a horrible monster (I can’t really blame him, he’s pretty great at it), but the rest of the main cast has considerable depth. Casey Affleck’s performance is quietly moving. His character is far from the monster Abbott’s is; instead, a ghost seems to loom over him at all times. His character’s life has been filled with tragedy and actions based solely on survival. It’s no wonder he’s not emotionally available. How can you make room for love when you need to make sure you have enough food to survive the winter?

Along with the others, he’s a product of a harsh world, which Mona Fastvold captures splendidly with great period-specific detail. During the winter months, everything becomes absolutely dire. All color fades away, as does seemingly all capacity for feelings. The characters can tend to every task they need to make it until spring, but if one thing breaks the wrong way, there’s still a good chance they could meet their ends. The World to Come often takes on the personality of a Western, showcasing a tough, unrelenting landscape the characters feel they can never beat.

The quiet persistence of the characters in The World to Come is incredibly moving. Through it all — even Abigail’s journal entries where she seems to lose hope — they keep moving forward. The romance between Abigail and Tallie that blossoms becomes even more emotional because of it. In the face of everything the terrain throws at them, they endure. 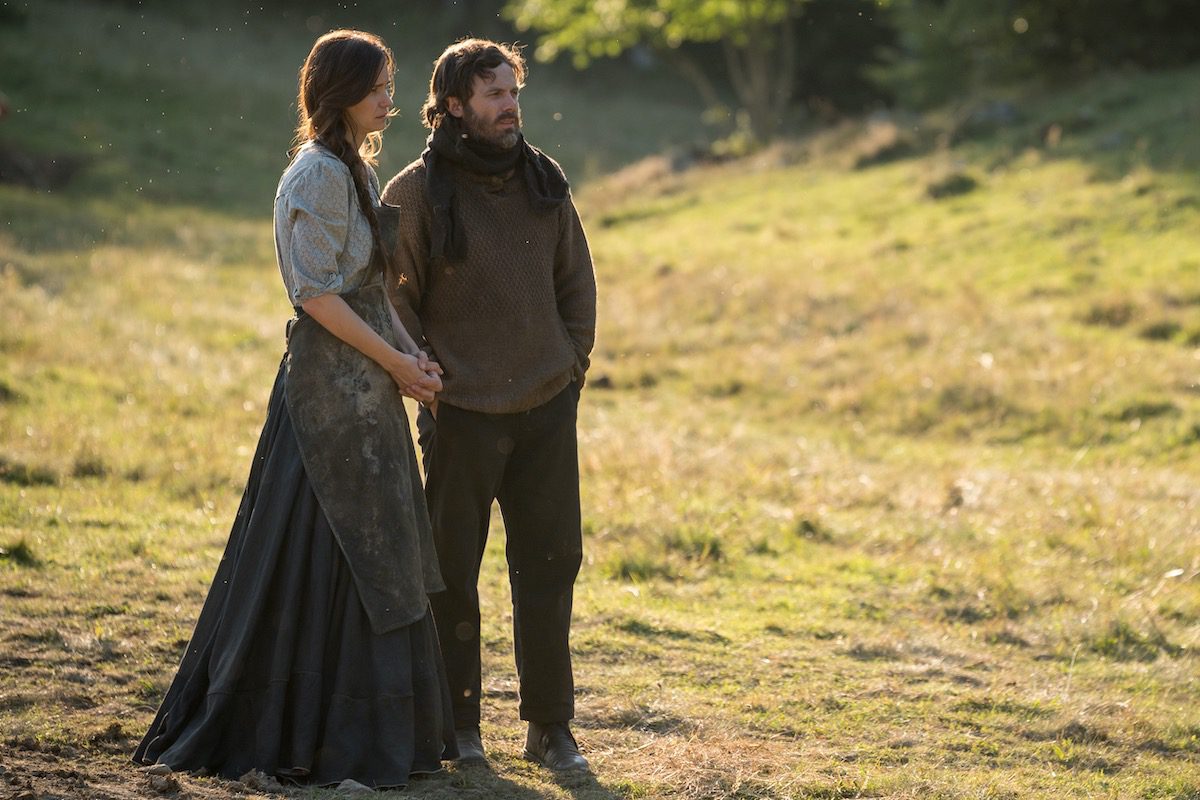 Abigail’s journal entries are the structural backbone of the film. She shares her thoughts on everything, from how Tallie looked on a given day, to how Dyer had to slaughter some of their animals, to her growing/waning optimism for the world itself. She’s very intelligent and loquacious. When Dyer asks about starting their family once again, Abigail asks for an atlas. All of this is an amazing setup for how she interacts with Tallie. Immediately, she loses her ability to speak, croaking out a few words whenever she can muster the courage. The juxtaposition is such a strong way of exploring the overwhelming feelings she has for Tallie. In a worse movie, this could seem silly; In The World to Come, it’s played perfectly.

Their relationship generally follows the usual beats: an instant attraction, followed by the two slow slow-playing their feelings, culminating in an outpouring of emotions for one another, albeit slightly muted in this case. You can also count on a mounting rage from others which threatens to damage their relationship and their lives.

I’m of two minds on this. At this point, it’s a cliché to tell a tragic period LGBTQ romance. The story has been played out so many times, and as many have stated, maybe it’s time we move on to other LGBTQ stories. But in an industry that is still dominated by the straight male perspective, I’m always happy to see movies like The World to Come get made. Should there be more diversity in the kind of LGBTQ stories told? No doubt. But I think that speaks more to the problems with the industry as a whole, and not The World to Come itself. (I’m also a straight white dude, so, you know, put me in my place if I seem misguided.) Mona Fastvold delivers one of the best versions of this story you could ask for, thanks in large part to Katherine Waterston and Vanessa Kirby, who are both so warm and loving in their roles.

Much of The World to Come is told through Daniel Blumberg’s clarinet-leading score, which is easily one of the most distinctive and emotionally resonant scores in some time. It’s instantly iconic in my mind. Not just because it sounds pretty (it really does), but it steps in for the feelings Abigail and Tallie are unable to express. Despite the repression, the passion still comes through. The World to Come finds a way to present a bleak present, but also a loving past and future. Strong memories never die.

Thank you for reading! What are your thoughts on The World to Come? Comment down below!

[…] that sideswipes a lot of queer-centric media that depicts them exclusively as subjects of abuse, trauma, and shame (done excellently so with the fake Brokeback Mountain-esque film, The Treasure Inside […]

[…] the rest of the children too, and it was then Tina realized that they had to fend for themselves. Trauma is something Tina would come to know more when Ike comes into her life and the famous duo is […]

This is an excellent piece. I enjoyed this film quite a bit but struggled to put together what I liked so much. You said it all here! Love this movie and love this review

Thank you so much!!! I really appreciate your kind words :)