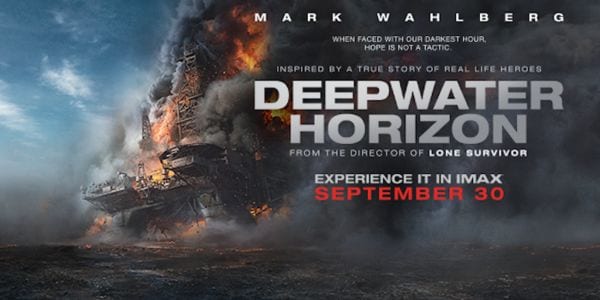 How exciting!  My first review!  Mark Wahlberg’s next film, Deepwater Horizon, has the honorable distinction of being the film that started my critical pursuits.  All reviews will be spoiler free unless there are a lot of requests for more in-depth discussion of the film.

Deepwater Horizon is directed by Peter Berg and stars Marky Mark Wahlberg alongside his funky bunch (just kidding), Kurt Russell, Kate Hudson, and others.  The movie centers completely around the worst oil rig disaster in U.S. history which occurred on board the Deepwater Horizon offshore drilling rig in 2010 and its immediate aftermath.

For background, I absolutely loved Lone Survivor, Peter Berg’s last team-up effort with Mark Wahlberg.  It was an incredibly gritty, realistic war film with gripping action and great performances that honored our fallen heroes.  Every bit of footage that was released for this movie seemed to have the same tone as Lone Survivor.  I expected Deepwater Horizon to move me emotionally just as Lone Survivor did. Moreover, the early press around the movie seemed very positive which only increased my expectations for the film which grew larger as my anticipation grew waiting for the 1,000 trailers to finish ahead of the feature film.

Let me just say: Deepwater Horizon did not disappoint. Peter Berg has directed another gritty, hyper-realistic movie that has certainly helped everyone to forget even more that he directed Battleship (oops).   Berg was definitely the star of the movie, his signature directing style rang loud throughout the film, giving us a truly realistic, heartwarming tribute to the brave souls who lost their lives on the Deepwater Horizon.  Every actor involved gave a solid, very grounded performance.  There was nothing “Hollywood” about this movie.  Berg seemed more intent on giving us realistic action and dialogue, which is very appreciated.

I normally enjoy Marky Mark, aside from the occasional The Happening performance (ugh), and he was solid as the main character of the film. But what I really liked from Berg was that although Wahlberg was obviously the headliner of the movie, he was not painted as a Mary Sue hero-type that saved everyone on board, but rather as one person fighting for his survival.  Kurt Russell was great as “Mr. Jimmy,” the operational manager of the oil rig.  I keep forgetting how much of a badass he is.  John Malkovich played the most DESPICABLE executive from BP.  He is one of those characters that just gets completely underneath your skin.  He was perfectly casted in this role.  There’s something about Malkovich’s face in these types of slimy roles that makes me really want to pop him in the mouth.

One issue with the film was the pacing.  I felt that the action/disaster stage took too long to start in the film and concluded too soon.  It felt like there was about 10-15 minutes missing right in the middle of the climax of the film.  This might have been a good thing though considering I had a tough time watching the peril as it progressed.  The realistic nature of the action made for some very tough moments to watch.

Overall,  Deepwater Horizon is a suitably gripping action flick with a very thoughtful tribute to the lives lost on the oil rig.

I hope you enjoy my first review! Thank you for reading! What are your thoughts on Deepwater Horizon? Comment down below!