The Mysteries Continue in ‘Glass Onion: A Knives Out Mystery’

Officially queer-coded Benoit Blanc launches into another case in 'Glass Onion: A Knives Out Mystery.' 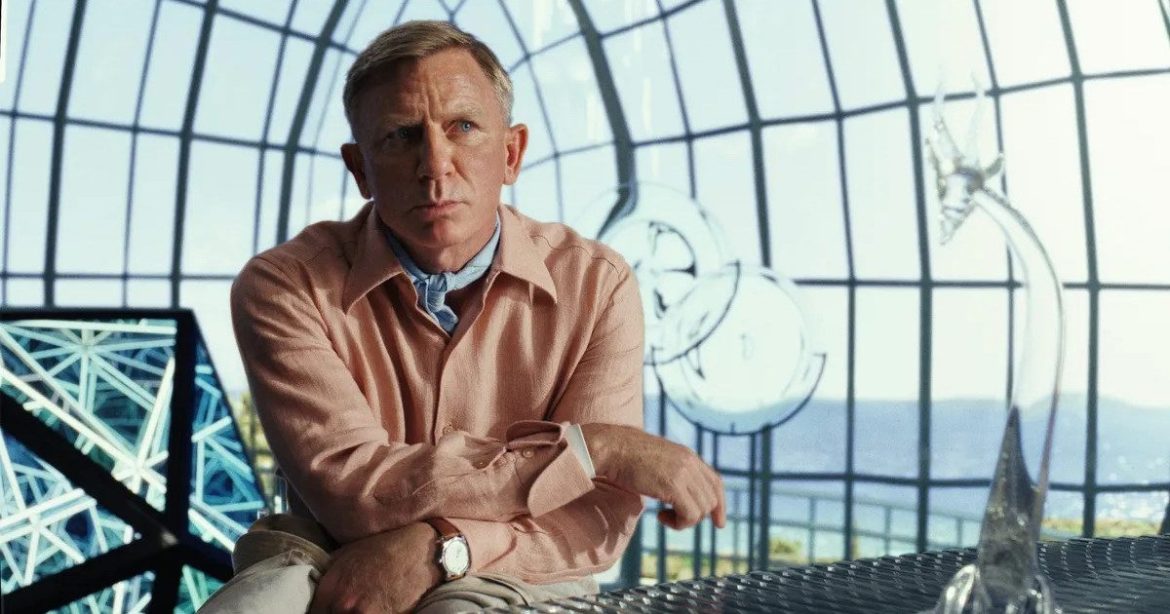 Minutes before I made eye contact with Kathryn Hahn I was very much in a daydream of thinking, “how have I ended up meters away from Hahn herself?” After being invited to a press conference for Glass Onion: A Knives Out Mystery, I knew it was an opportunity I couldn’t turn down. The entire cast, along with Ram Bergman and the man himself, Rian Johnson, was also sat within reaching distance from my very tired self on a Sunday morning in October. On the last day of the London Film Festival, it was time for one of my most anticipated films of the festival to screen. Johnson’s Knives Out felt like a lifetime ago, even though it was only released in late 2019. In retrospect, I still can’t decide if I love Knives Out, or if it felt like something I should adore so I didn’t feel left out. Regardless, Benoit Blanc (Daniel Craig) was a character I needed more of. And finally, Glass Onion is here on the big screen (a very unfortunate limited run!) before hitting Netflix just in time for the holiday season.

Blanc returns to solve an epic new mystery on Miles Bron’s (Edward Norton) private Greek island. His invite, along with an array of other characters, is delivered to the door in a box. The box contains a puzzle that each of the invited guests must solve to unlock the invitation to Miles’ murder mystery party. Miles is known for throwing very extravagant parties, an invite to which is insanely coveted. He’s a billionaire without a care in the world… other than the fact that he’s got the literal Mona Lisa on loan from The Louvre for the summer and needs to keep it safe. Maybe money can buy happiness if Mona’s in your dining room. Put Blanc into the equation and he’s solved the weekend endeavors within minutes and ruins all of Miles’ fun. But when the “made up” mystery isn’t the only murder to be solved, the whole group must team together before time runs out.

Joining Norton, Craig, and Hahn in this ostentatious cast are Dave Bautista, Janelle Monáe, Kate Hudson, Leslie Odom Jr., Jessica Henwick, and Madelyn Cline. Each plays one of Miles’ friends, apart from Blanc who’s never met Miles before in his life. They’re all fascinating characters. Cline’s persona, Whiskey, particularly shines through as Duke’s (Bautista) younger girlfriend — she’s confident, sneaky, and a whole lot of eye candy. Duke is a YouTuber who loves advocating for men’s rights on his channel and millions around the world love him for his views. Sounds all too familiar (unfortunately)!

Glass Onion takes commentary on the real world to the next level. Each fictitious character could almost be based directly upon someone in the news today. This makes it all the more hilarious. The jokes will stay relevant for years to come, making it one we’ll talk about indefinitely. Knives Out remains one that’s brought up often enough to be a modern classic, especially in the world of whodunnits. Miss Marple who? I only know Benoit Blanc. The remarks about COVID are especially humorous knowing that Glass Onion was filmed in Greece in the summer of 2021 with various restrictions still in place. Hahn even mentioned during the press conference that she took some of her family with her so that they could all be together.

Being in the room when Rian Johnson confirmed Benoit Blanc’s sexuality was really something. What a time to be alive! The biggest cheer just from one individual was released after Johnson’s corroboration. Benoit Blanc is, in fact, gay! After watching Glass Onion that same morning, there was a little speculation that Blanc may be queer. Blanc’s potential lover is possibly one of my favorite cameos ever in a film. (Side note: what made this even better was speaking to Craig on this lovely sleepy morning. As he shook my hand, he turned around to tell everyone besides us that he was excited to be shaking hands with me. I spoke to him briefly about the film and life. Getting a 1-on-1 with one of Britain’s finest actors is something I won’t soon forget.)

You spend the entirety of a whodunnit figuring out well… who’s done it. I think with Glass Onion, the mystery holds together quite well. It’s written flawlessly to the point you spend the whole film attempting to piece it all together. Seeing it on the big screen is a must which makes it such a shame that it’s only a limited theater run. At least it becomes more accessible on a streaming service. Still, Glass Onion is one of the best theatrical experiences of the year.

Thanks for reading! What are your thoughts on Glass Onion: A Knives Out Mystery? Comment down below!