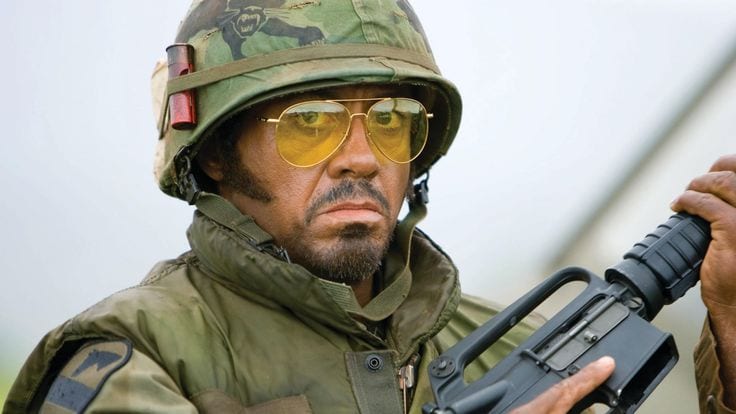 Satire is one of the best avenues for creativity in Hollywood.  It allows for writers and directors to poke fun at a lot of different issues from a wide variety of topics.  One of the best instances of parody is the action-comedy Tropic Thunder!  As we gear up for the summer movie season, let’s dive deep into one of the best summer comedies of recent memory.  The following review will be spoiler free.

Tropic Thunder is directed by Ben Stiller and stars a large assemble cast including Ben Stiller himself with Robert Downey Jr., Jack Black, and Jay Baruchel.  The film follows the production of a very expensive Vietnam War film that is quickly derailed by the egos on set.  In an effort to control his actors, young director Damien Cockburn (Steve Coogan) drops the actors into the middle of the jungle to give the film a realistic feel.  Unfortunately, real danger ensues as enemy soldiers become apparent.  The problem is that while this real situation is occurring, the group of actors still believe that a movie is being filmed.

Ben Stiller’s brand of comedy is very hit or miss, depending on who you ask.  Many people would even say that it’s very off-putting.  Personally, I don’t think it’s that black and white.  His career has had its peaks (Zoolander, Dodgeball) and valleys (Zoolander 2, The Watch).  So what causes these massive shifts in film quality?

In my opinion, Ben Stiller suffers from what I like to call “Melissa McCarthy Syndrome.”  When you give Stiller a solid script with smart writing, he performs very, very well.  However, when given a spotty screenplay, Stiller reverts to improvisation that can be annoying and over the top.  Get the comparison? As with any successful comedy with a large cast, the chemistry in Tropic Thunder is magnetic.  The film has that snappy dialogue that you need from a raunchy comedy that makes every conversation sizzle with hilarity.  Each character is given a chance to shine, giving us all a fully balanced film that has jokes coming in from all different directions.

However, the obvious standout is Robert Downey Jr. as Kirk Lazarus, a method actor that goes way too far in every single one of his roles.  His performance in this film so great that the Academy actually nominated him for the best supporting actor Oscar, which is especially astonishing since Tropic Thunder is a comedy that was released in August.  Just think for a second how hard his role is: he has to play an Australian that’s playing an African-American.  All the while, he plays a man that is a serious method actor, so he can never come out of character.  Performances in comedies are mostly marginalized, but we should all pay homage to how great RDJ is in Tropic Thunder. However, what really makes Tropic Thunder a cut above the rest is its superb parody of the film industry.  Each part of the film process is satirized in some manner.  From the actors who have checkered pasts to the absurd studio executive (which I’ll get to in a moment), nothing is safe from Tropic Thunder’s great script.

The best part of the craziness on screen is that there’s some truth to it, which any good satire should make very clear.  Massive productions are an incredibly stressful process.  Directors are often under huge amounts of stress while handling massively scoped scenes as executives check in on their every move.  Put in the wrong situation, directors can crumble under the weight of expectations.  Steve Coogan captures this idea in such an accessible, yet hilarious way.

Moreover, the satire is goes to the nth degree with the help of some inspired side characters.  Matthew McConaughey plays the perfect, terrified agent that will do anything to keep his client, even if it means getting him his TiVo in the middle of a dangerous jungle.

But, the coup de gras may be Tom Cruise as Les Grossman.

We don’t get to much of the crazy side of Tom Cruise in films anymore.  For example, we don’t see him freak out like in Jerry Maguire.  These days, Tom Cruise’s character in all his films is “action man.”  However, Tropic Thunder allows Cruise to completely let loose and just spout ridiculous and terrible things to everyone else on screen.  Everyone’s favorite Scientologist always gives his role his best shot, and Tropic Thunder gave him free reign to go absolutely bonkers.  This may be my favorite glorified cameo ever in a film.  Also, for those for have seen the film, you’d probably agree when I say that Cruise during the ending credits is a thing of beauty. The one thing that maybe rubs me the wrong way is a pretty serious spoiler.  But this plot detail occurs later in the film and is the ultimate destination of the main characters.  The hi-jinks that ensue at that location are pretty hilarious (including the Oscar moment for Robert Downey Jr.).  However, the location itself felt like a departure from the feeling that rest of the movie gave me.  The film takes somewhat of a dip.

But other than that, Tropic Thunder is comedy gold.

In the end, Tropic Thunder is modern comedy classic that will continue to give moviegoers enjoyment for years to come.  It gets an A.  Tropic Thunder is new to Netflix as of April 2017, so get to watching it!  You will not be disappointed.  It’s not often that a summer comedy gets Oscar consideration, so you may want to see what all of the fuss is about. Thanks for reading!  Have you seen Tropic Thunder?  Respond to the poll and comment down below to let your thoughts be heard.

[…] Black Americans that has echoed for generations. There have been plenty of great movies about the Vietnam War, but seldom do they capture the immediacy of war and the multigenerational pain that comes […]

Ben Stiller is certainly a love him or hate type of guy. I personally enjoy at times, but I understand where you’re coming from!

It’s odd, since he cowrote the script. Very funny film. I love the writing, and Downey and Cruise nail their parts.

That is interesting! Sometimes people’s faces and mannerisms are just annoying to you.