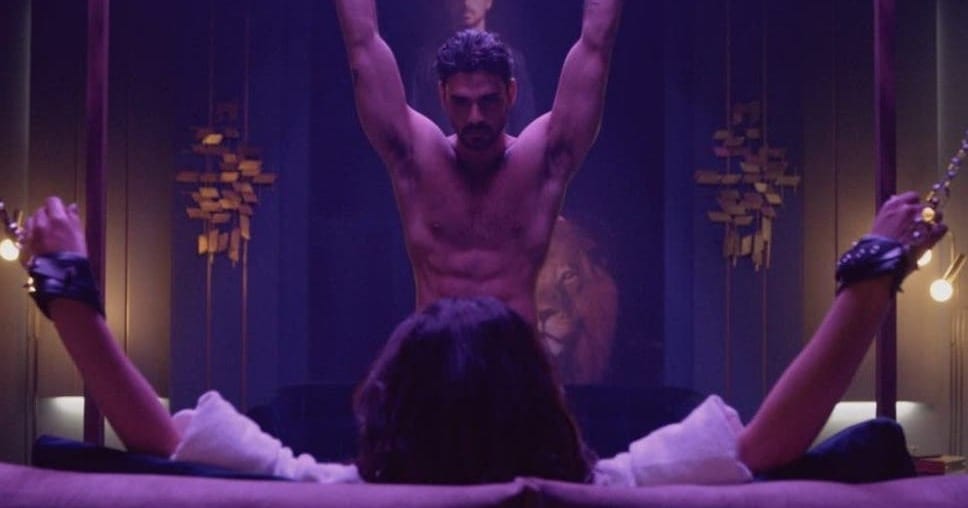 You know something is a phenomenon when it makes Gaspar Noe‘s Love — an explicitly unsexy movie — also popular. Usually, I would say something like “for better or worse, 365 Days has taken everyone by storm.” But the truth is, there’s no “for better” to make the saying work because 365 Days is trash. But it’s also fascinating trash, as it makes the worst decisions possible with every chance that comes its way. It’s also hilariously dumbfounding and just plain dumb.

365 Days has become a mainstay on Netflix’s Top 10 in recent weeks, and IMDb’s most viewed film page. Michele Morrone is now everyone’s favorite actor to play a psychopath, and a few people are probably asking themselves, “what’s wrong with Poland?” Seemingly out of nowhere, the power of the Netflix algorithm created a franchise, as the next few books in the series will unquestionably be fast-tracked into production as soon as possible.

I had the misfortune of watching the film, and while I usually stay away from dunking on movies that seemingly every outlet is dunking on themselves, it’s actually warranted this time around. This movie is really bad. So bad, in fact, I had many, many questions after watching it:

Why Do People Find Kidnapping Sexy?

For context, Anna Maria Sieklucka’s Laura is on a trip with her boyfriend and friends, when she is kidnapped by well-known gangster Massimo and taken to his mansion. The Don with abs tells her he saw her on the beach moments before rival gangsters shot and killed his father five years ago (an event in which he was also injured by the same bullet) and he hasn’t stopped thinking about her since. He goes as far as saying he looked for her around the world with the feeling that, one day, she would be his. He gives her 365 days to fall in love with him and live a life of luxury, or he’ll release her.

I get that, in a vacuum, a guy desperately longing for a woman’s love could be pleasurable to witness in a movie as wish-fulfillment for some sort of fantasy, but, as will be a running theme through this piece, HE KIDNAPPED HER AND IS HOLDING HER AGAINST HER WILL!!!!!!!! 365 Days compounds the issue by having Laura fall in love with Massimo halfway through the movie, seemingly forgetting he held her by force at his compound. Look, I get Michele Morrone has nice abs and Anna Maria Sieklucka’s is clearly stunning, but for the few out there who unironically love this movie, why is kidnapping so erotic? Regardless of where this relationship goes, it’s built on the back of a serious felony.

I also forgot to mention Massimo has probably murdered over one hundred people. Sex appeal, amirite?

What’s with the Terrible Music?

There’s clearly some synergy going on with Michele Morrone also singing four of the songs on the soundtrack. His song “Hard For Me” has become the most popular. For…obvious reasons.

But overall, at its best, the music is pretty bland and bad; at its worst, it’s horrible. Bad, slightly edgy electronic pop plays over every just about every scene, including the infamous sex scenes. If I was somehow able to get by the idea Massimo KIDNAPPED Laura (I wasn’t), the sex scenes would have been ruined by the horrendously misplaced music.

The worst of the bunch has to be Morrone’s “Dark Room”, which is cut awkwardly between lines of dialogue to make it also a crime against film, not just music.

What Kind of Businesses Does Massimo Run?

We never quite learn what Massimo’s crime family does for its money. Every time Laura asks him, we get a version of the stock “you know, business” answer. He mentions they dip their feet into many ventures, but that’s as much information as we get. Clearly, something illegal is afoot. Exhibit A: Massimo and his cronies murdering a man as Laura is looking for an escape shortly after her capture. And where’s the police in all this? 365 Days makes a huge deal of Massimo’s wealth and how many connections the crime family has, so their criminal activity is undoubtedly far-reaching. Are they staying away because he’s too powerful? Are they gathering more information for their eventual raid?

Follow-up question: what did the family do before Massimo’s father died? He’s seen rejecting an offer to work with human traffickers before his death, presumably because their family’s business is more admirable, but to what extent? Are they into olive oil like in The Godfather? Is it drugs? Do they only kill 50% of the people they come across? Was he a staunch believer in keeping human trafficking duties in-house rather than making a deal with another crime syndicate?

Follow-up question to my follow-up question: Massimo proves to be a ruthless crime family leader who seems to have doubled down on the nastiness in the wake of his father’s death. Is he okay with human trafficking? Did he end up making a deal with the other family?

How Many People Has Massimo Kidnapped?

After an outrageously long sex sequence in which Laura and Massimo do the deed in every section of the yacht, they go to a ball, where Laura meets one of Massimo’s former mistresses. She’s immediately cruel to Laura and shows some stalker-ish tendencies hinting at a royally toxic relationship with Massimo. Was she kidnapped too, or did their relationship start consensually? Does Massimo kidnapped women and give them other kinds of 365-day ultimatums, like 365 days to become his sex slave? Or what about more mundane tasks, like 365 days to fix the slice in his golf swing?

You could also extend this question to the number of people he and his henchmen have kidnapped in his general criminal activity, not just to find a girlfriend. In which case, the answer is probably in the thousands.

What Have Laura’s Loved Ones Been Doing for Almost a Year?

So Massimo and his henchmen kidnap Laura at the resort and then take her to the family’s mansion. After Massimo gives her phone privileges, she sends a quick note to her mom saying she got a new job at a hotel in Sicily and was given a year contract, but that’s all the information we see her send out. I don’t know about you, but if I don’t text my mom for a day or so, I’m immediately hit with a “how are you?” text. How is her mom not the least bit concerned her daughter left Poland? Wouldn’t she want to visit the “hotel” at the very least? When Laura visits her friend Olga back in town, Olga is briefly worried, but then thinks nothing about it. Is everyone in this movie a psychopath?

And what’s stopping Laura from calling the police and telling them Massimo KIDNAPPED HER??? The film tries to pass it off as Laura finally beginning to trust Massimo, but everything about it is outrageously absurd.

From the beginning, Massimo states he will not touch Laura without her permission. Fine. He still kidnapped her, but fine.

The ground rule obviously means he will not force himself on her, but what about his violent outbursts that result in multiple chokeholds? As soon as Laura questions him, he immediately snaps around and shoves his hand onto her throat. So he’s fine with only some violence against women, I guess. Still, he later breaks his own rule by putting his hand down Laura’s pants while she’s FORCIBLY STRAPPED TO HER SEAT ON THE AIRPLANE!

For all the joking around in this article, this particular conversation is why 365 Days isn’t a so-bad-it’s-good movie recommendation. It liberally uses violence and sexual violence against women in an attempt to titillate the audience. Sometimes, it plays violence for jokes! This movie is beyond toxic.

Is Laura the Worst at Eating Ice Cream? 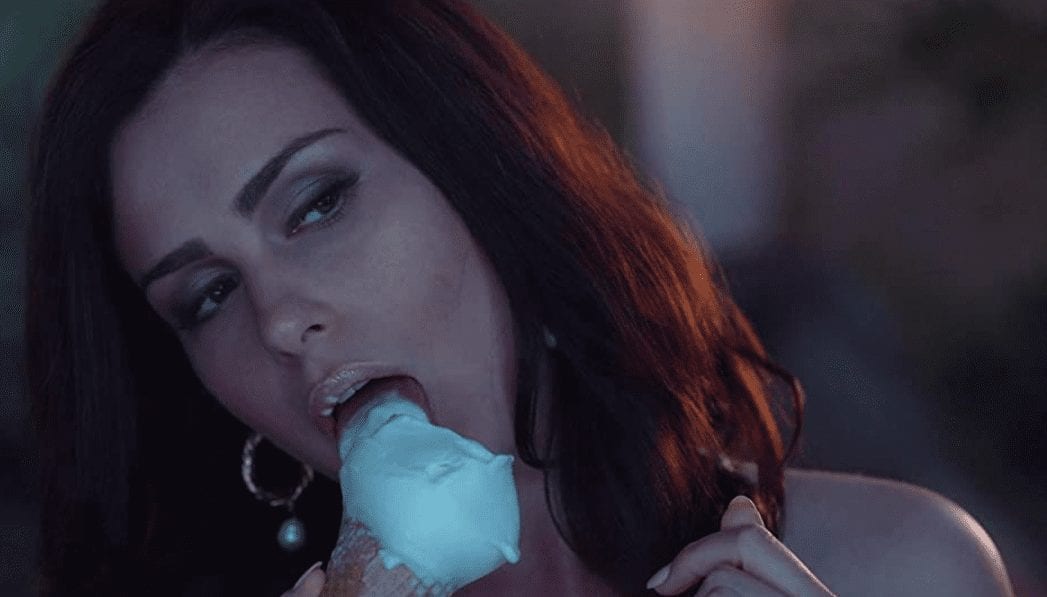 What’s with that Ending?

A clear attempt to keep things slightly vague and tease a sequel, we see Laura’s car enter a tunnel presumably filled with members from the rival crime family and fail to emerge on the other side. Massimo gets wind of the accident and drops to his knees, seeing the same flashing images of Laura on the beach from five years ago (lol). The camera then shifts focus out to the sea, where a yacht is crossing the horizon in the distance possibly indicating Laura escaped. My guess is the next movie will do something stupid and show Laura inexplicably leaving the car at the last second so she can survive.

And then, with no closing resolution, the film fades to white and the credits play. It’s almost as if directors Tomasz Mandes and Barbara Bialowas had absolutely no idea how to bring this shapeless movie home in the end. Let that be a listen to you, film majors, if you don’t know how to end your movie, just stop a scene and start rolling the credits!

365 Days is so bad, it makes Fifty Shades of Grey look like an AFI Top 100 contender. Next question!

WHY ARE SO PEOPLE FASCINATED BY THIS?!?!?!

There are plenty of dissertations on the movie-viewing public’s fascination with sex in film, specifically with our odd views towards it when we, for the most part, run towards it but recoil upon seeing it. Yet, we’re okay with viewing extreme violence. It partially explains the intrigue and simultaneous lambasting to 365 Days, but unlike Paul Verhoeven’s Showgirls, I doubt many will be reading this movie as a secret masterpiece in the years to come.

For all the jokes, memes, and WTF blog posts (like this one!), some people genuinely like 365 Days. Is Michele Morrone’s hotness that overpowering to those people? Are they blissfully bypassing all the film’s extremely problematic elements? I don’t know, and I don’t really want to know. These people frighten me.

Thank you for reading! What are your thoughts on 365 Days? Comment down below!