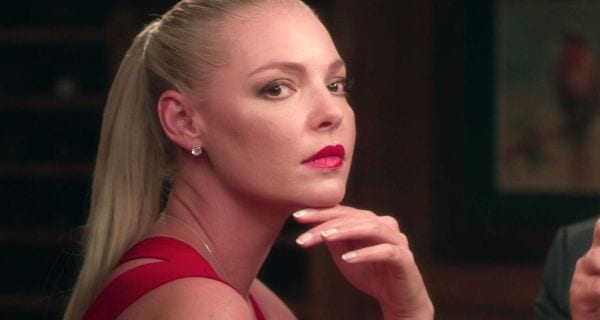 Once in awhile, you come across a film that just floors you in just for all the wrong reasons.  Unforgettable is one of those movies.  The film is about to leave theaters, so I begrudgingly went out to see it before it disappears into a fate full of people that accidentally choose to watch it when they’re on Netflix only to quickly learn the horrible mistake that they just made.  But could the film be ironic fun or just dull?  I went to the theater to find out for myself.  The following Unforgettable review will be spoiler free.

Unforgettable is directed by Denise Di Novi and stars Rosario Dawson and Katherine Heigl in the leading roles.

Unfortunately, Heigl’s character, Tessa, is having a difficult time dealing with her recent divorce to her husband David (Geoff Stults).  To make matters worse, David moves into the home they used to live in together with his new fiance, Julia (Dawson).  Julia believes that she has gotten her life on track after a troubled past.  However, Tessa’s fixation on her relationship turns into an insane obsession which threatens the lives of everyone involved.

I can’t say I was looking forward to seeing this movie…at all.  The film was released on April 21st and I’ve been putting off seeing it until now because, well, even critics need to have standards sometimes.  Considering the screenwriter of Unforgettable is fresh off of last year’s Shut In (which currently holds a 6% on Rotten Tomatoes for those unaware of the film) and is alongside a first time director behind the camera, I couldn’t imagine a world where I’d write a positive Unforgettable review.  Could you?

Where do I even start?

From the moment the first frames pop onscreen, you’ll notice that Unforgettable is a very cheap looking film.  I’m unaware if the film had delays or not in production or if it sat on the metaphoric studio shelf for awhile, but the cinematography of the film feels closer to a 2007 film rather than a 2017 film.  Each frame has a grainy texture to it that is very unappealing and makes the entire project feel like a sub-par Lifetime movie.  But let’s be honest, it’s an insult to those countless Lifetime movies for Unforgettable to be compared to them.

To make matters worse, there is hardly any solid acting to clear up that hazy picture.  I give Rosario Dawson a ton of credit for being a professional and doing the best she could with her horribly written dialogue.  But she can’t save this Unforgettable review from going off the deep end.

Katherine Heigl was very popular in the mid-2000’s.  If you saw a romantic comedy that came out during that time, odds are that she was involved somehow.  I guess Unforgettable was supposed to be the start of her comeback tour, but, unfortunately, she is absolutely dreadful.  All she does is walk around with crazy eyes, completely overacting in an attempt to seem dramatic or hurt emotionally.  A lot of moments turn into unintentional hilarity, especially one scene that includes Heigl falling down stairs which may be my favorite bad scene of the year so far.  I could not believe some of the choices she made as an actress. 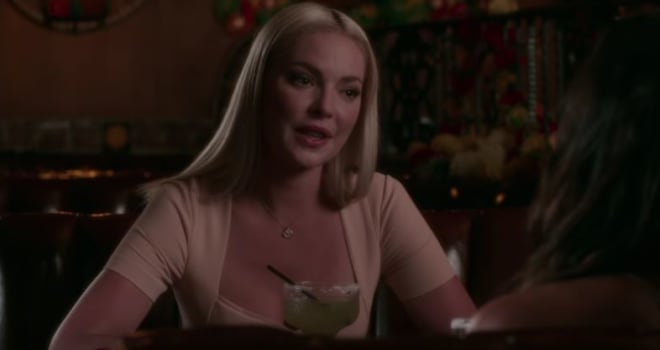 On top of that, each character has a hilarious backstory which includes Rosario Dawson as a half-retired blog editor and Geoff Stults as an old Merrill Lynch worker who just wanted to brew his own beer.  Couldn’t you think of anything better?

I understand that the film is only trying to create some type of backstory that is a flimsy setup as to why the characters are in their current situations, but couldn’t you make something up that wasn’t hilarious?

Moreover, Unforgettable does more to hurt the advancement of women than lower pay in the workplace.

Throughout the entirety of the movie’s hour and forty minute run time, there isn’t a single scene that shows the strength of any of the women in the film.  Every scene has our two leads either worrying about men, needing a man to feel better, or casting aside other pursuits in order to renew old bonds with a man.

What type of message is this movie trying to relate?  That women need men in order to be happy? 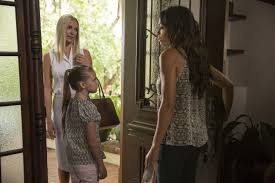 It’s a given that a movie with a plot similar to Fatal Attraction or any other relational movie will have women paired with men in some way, but there’s a much better way to go about relaying this idea without the women involved in the movie appearing so weak or incapable.

To illustrate this point, about halfway through Unforgettable I lost track of how many times the husband, played by Geoff Stults, had to comfort Rosario Dawson and tell her that “everything would be okay” while patting her on the back or giving her a hug.  Any women who sees this movie has every right to be appalled.

The first two acts of this film are bad enough to give this film an F-grade, but the final act is the worst thing I’ve seen this year.  When the final conflict depends on a landline not working in the year 2017, you know your film is in trouble.

Unforgettable could have good, trashy fun, but you can tell that that actors’ hearts just aren’t in it.

There’s a moment during the predictable cat fight where Katherine Heigl tries to choke Rosario Dawson, but you can see her barely have her hands wrapped around Dawson’s neck which takes away all the tension from the scene.  That’s probably the fifth worst thing with the entire sequence. 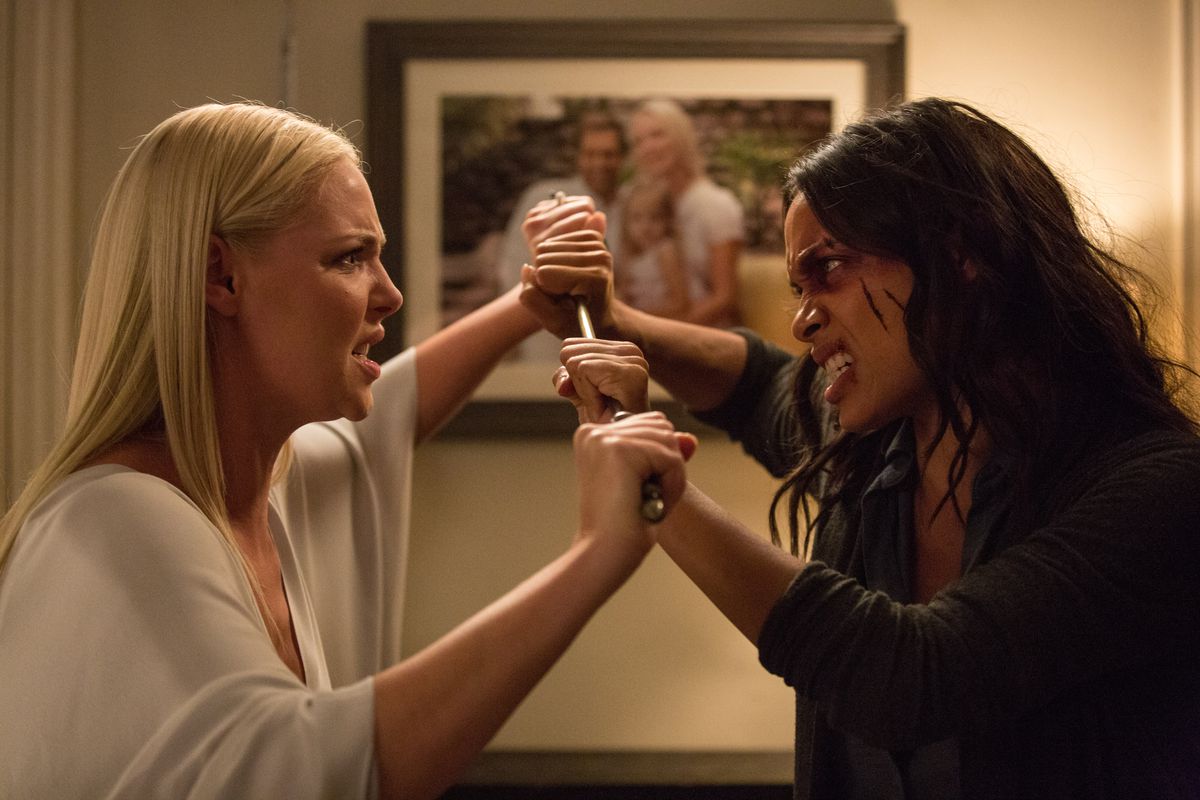 To make matters worse, Unforgettable actually has the gall to setup for a sequel which, judging by the film’s box office results, will probably never see the light of day.

Thanks for reading my Unforgettable review!  What are your thoughts?  Be sure to comment down below with your thoughts.

Yyyeeeeaaahhh. I happened to catch part of this… thing… on TV one night. It would have to improve to be awful.

Thank you for saving me from the hell of $12 and 2 hours I’ll never get back. I had such high hopes for this movie, too. Dammit Rosario… make better choices!

Glad to help! I suffer so you don’t have to!

MovieBabbleBabble gives this review an A.

“What I liked: nothing” LOL

I love this review. I think bad ones can be more fun to write! It’s sad to see actors who started out with so much promise go downhill in the way Katherine Heigl has.

Lol thanks so much! It’s so true, I loved her in Knocked Up!

My favorite part of this review: “What I Liked: Nothing.” ??? After watching the trailer, that’s exactly the reaction I was expecting.

It’s unfortunate that you paid to see that trash. You suffered for your readers!

Lol I do it because I care

Thank you, but you have my sympathy. ?

Lol at least I have some better May movies to look forward to! Seeing Guardians tomorrow!

I look forward to your review.

‘What type of message is this movie trying to relate? That women need men in order to be happy?’

You ever seen a happy single woman….that’s right no you haven’t.

Movie is still shit tho.

Bad Movies Made By Great Directors