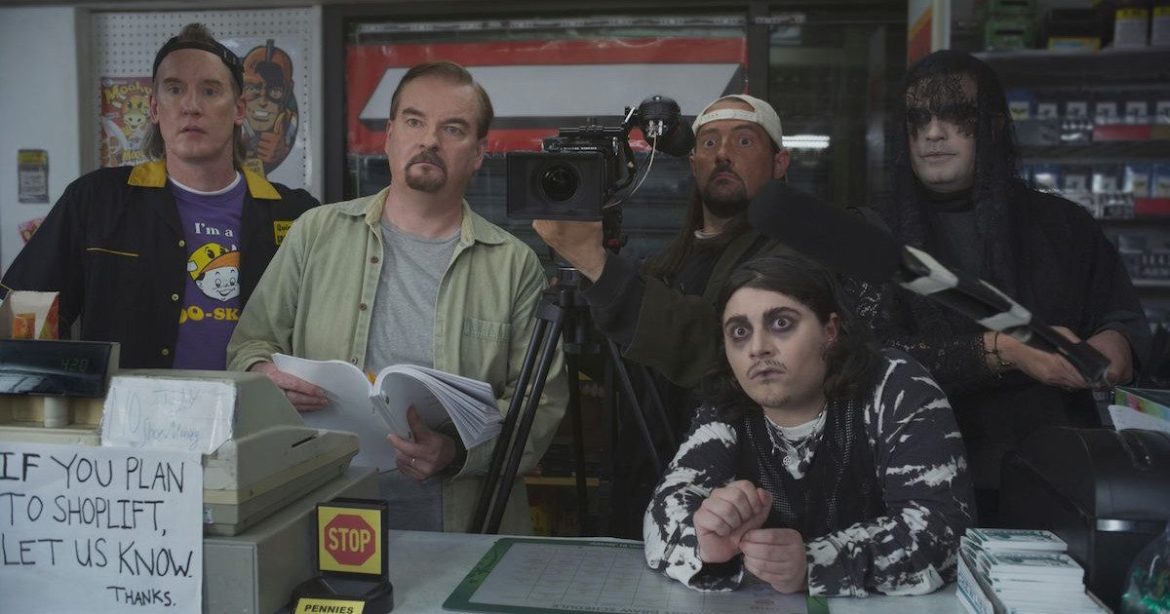 I will always have a soft spot for Kevin Smith. Even if you aren’t fond of his dick jokes, any cineaste will admire his ascent as a filmmaker. He’s one of the great examples of a filmmaker making it on their own terms. Who hasn’t dreamed of making a movie with your friends and then it becoming a cultural milestone? Scrounging up whatever money you can find, maxing out credit cards, taking that leap even with the possibility of financial ruin, but going for it regardless.

Kevin Smith’s life story is the envy of any aspiring filmmaker. It all started with 1994’s, Clerks, a film that was since selected by the Library of Congress for preservation in 2019.

Now almost thirty years later we have Clerks III. The young twenty-something leads of the first film look much older, but not much has changed.

Taking place fifteen years after Clerks II, Dante (Brian O’Halloran) and Randal (Jeff Anderson) are still running the Quick Stop, talking smack of the idiosyncratic customers that come by, and having long, drawn-out discussions about pop culture. When Randal suffers a near-fatal heart attack, he reflects on his life and his lack of accomplishments. He decides to redeem his failures in life by making a movie about HIS life — a movie much like 1994’s Clerks.

As with the main characters of Clerks, Smith hasn’t changed much too. He’s still a heartfelt geek that somehow made it into the Hollywood system. People like him usually don’t make it this far, but he did.

As a filmmaker too, Smith has been stuck in arrested development. While quite notable for his dialogue, Smith isn’t well known for his creative visuals or interesting camera angles. This is something Smith has been candid about, especially in his many hilarious spoken word performances.

But it’s 2022 now, and Kevin Smith’s appeal has lost much of its edge. This isn’t just because of his lack of growth as a filmmaker, but because having characters make pop culture references, especially regarding superhero movies and Star Wars, isn’t remotely special anymore. In fact, it has become groan-inducingly commonplace.

This was especially evident with 2019’s Jay and Silent Bob Reboot. Its over-reliance on references to Kevin Smith’s earlier films and modern pop culture had lost nearly all of its charm. Perhaps it’s due to my own cynicism concerning the state of current cinema, and who knows, maybe years from now I’ll be able to enjoy it more — I did love seeing Val Kilmer play Bluntman.

Clerks III has many of the same problems as Jay and Silent Bob Reboot. There are way too many callbacks to Smith’s foul-mouthed oeuvre, and though some of them work, others just feel lazy.

As a piece of filmmaking, the film won’t stun you with innovative camera work or visuals. If you aren’t a fan of Smith’s earlier work, it’s unlikely this film will do anything for you.

But unlike JASBR, Clerks III has an actual story to tell. And while it’s not a story that non-fans will care that much for, for people that have been loyally watching every entry of the View Askewniverse (the fictional universe that started with Clerks), Clerks III is an endearing epilogue to this saga of pop culture obsessed geeks.

The premise of Randal suffering a near-fatal heart attack is based on Kevin Smith’s own experience. The film is heavy on nostalgia but not because it wants to recapture old glories, but because it’s from a filmmaker reflecting on his life, having realized how close he came to death, and appreciating the past and the people he encountered along the way.

This makes the film far more somber than the previous two Clerks films. It’s not about enduring an aimless existence anymore, it’s about doing what you love before it’s too late. It’s about the willingness to change. The realization that everything, suddenly, can end just like that without warning.

It’s Kevin Smith’s version of Ingmar Bergman’s Wild Strawberries. Okay, it’s not really, but I thought it would make for an amusing title.

At the same time, the film is also filled with grief. Smith is older now, and besides facing his own mortality, he has seen loved ones come and go. The film is dedicated to Lisa Spoonauer, the actress who played the unfaithful Caitlin Bree in the original Clerks.

The character of Dante is also wrecked with grief, as we meet him again after the aftermath of a great loss, which does mean a minimal role of another charismatic performer. He’s a man unable to move on, or rather, unwilling to move on, and finds himself talking most intimately to the ghost of a loved one. While Smith’s proclivity toward melodrama does intrude on some of the film’s more emotional moments, both Halloran and Anderson give well-rounded, touching performances that show that they’ve come a long way since 1994.

Of course, both Jay and Silent Bob return, and make welcome pot-fueled intrusions to the film’s central premise. Trevor Fehrman as the eccentric religious fanatic Elias Grover, one of the best parts of Clerks II, also returns and brings some of the best laughs of the film.

As expected, most of Smith’s regulars pop up for a cameo. Without spoiling who, let’s just say you will at least see one infamous performer popping up with a thick Boston accent.

Clerks III is reliable Kevin Smith material. Full of dick jokes and a genuine heart. As with his earlier films, there are too many callbacks, and when it comes to drama, Smith tends to get a little too sappy.

Any diehard fan will likely be affected by the ending. It goes in a heartfelt direction you wouldn’t necessarily expect. It also seems to be a genuine goodbye to the View Askewniverse. Whether or not this is true, remains to be seen — I’m still hoping for a return of the highly underrated Clerks: The Animated Series.

And while the film certainly proves that Smith hasn’t changed much as a filmmaker, it does prove he’s grown more mature, and introspective, as a person. Snoogins.

Thank you for reading! What are your thoughts on Clerks III? Comment down below!

Face It: Batman is Hopeless