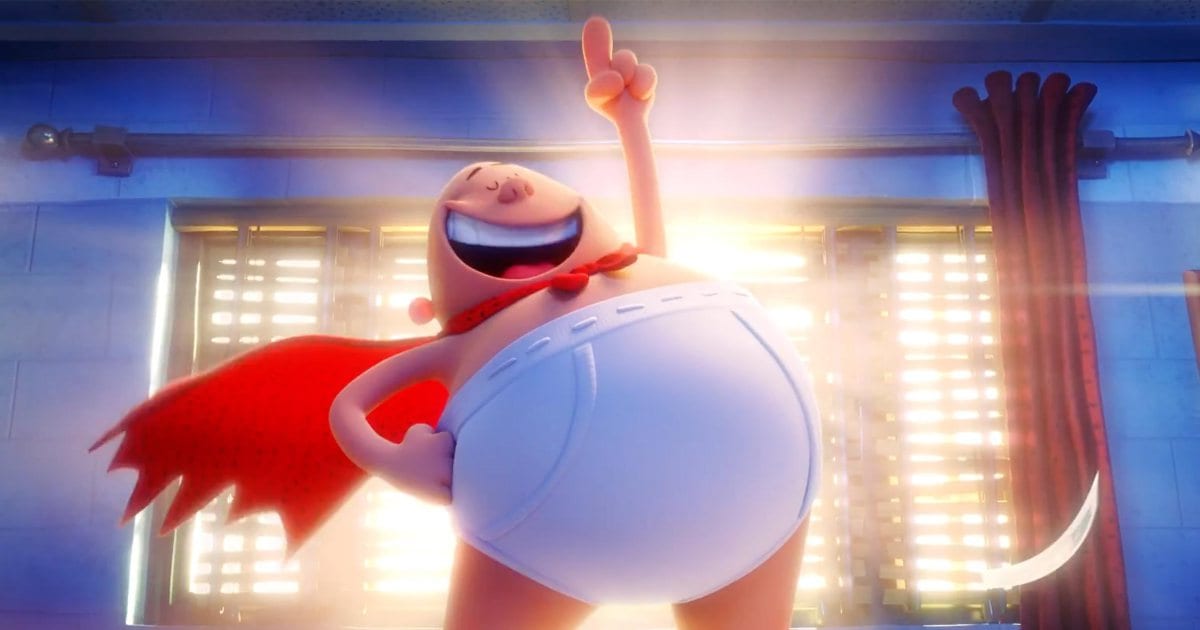 This weekend gave us another wide release film which has a built-in audience, Captain Underpants: The First Epic Movie!  Based off of the popular books meant for ten year-old boys, the film is sure to bring a bunch of potty humor that is absolutely ridiculous.  But does the film have more to offer than endless poop jokes?  The following review will be spoiler free.

Captain Underpants: The First Epic Movie is directed by Mark Caballero, Seamus Walsh, and David Soren and has multiple voice talents including Kevin Hart, Ed Helms, Nick Kroll, and Thomas Middleditch.  We follow the story of two pranksters named George (Hart) and Harold (Middleditch) who continue to get into a little too much trouble for Mr. Krupp’s (their principle) liking.  However, Mr. Krupp devises a plan to put the two friends into separate classes.  Terrified, the friends hypnotize Mr. Krupp to avoid such a fate, turning him into an incredibly dimwitted superhero named Captain Underpants.  Obviously, wacky shenanigans ensue.

For those unaware of the property, Captain Underpants is based off of twelve books (as well as three spin-offs) written and illustrated by Dav Pilkey.  Started in 1999, the Captain Underpants series has since sold 70 million books worldwide, making it suitable to call the series a phenomenon.

Obviously, considering the subject matter, these books were clearly aimed at little boys in order to make them laugh at potty humor.  You know you shouldn’t take the film seriously when one of the titles of the novels is called Captain Underpants and the Invasion of the Incredibly Naughty Cafeteria Ladies from Outer Space (and the Subsequent Assault of the Equally Evil Lunchroom Zombie Nerds).

Seriously.  Go look it up. Regardless, Captain Underpants: The First Epic Movie has a built-in audience that will enjoy a well-made movie.  But does is succeed?

We don’t see it very often these days, but Captain Underpants is a movie that understands exactly what it is: silly and ridiculous.  At no times does the film try to extend its boundaries into some greater meaning.  How nonsensical would it be if a movie entitled Captain Underpants had some heavy handed themes regarding life and the pursuit of happiness?

The trio of directors that worked on this film understand that a movie centering around a guy who flies around in only his underwear and a cape needs to be campy.  Because they have such a strong grasp on the tone of the film, this allows for the jokes and gags to be unrelenting.  Practically every moment in this film has some type of joke or wit lying underneath its exterior, never allowing you to exhale.

Because there is zero fluff in this film, Captain Underpants can focus on the zany story at hand rather than having to manufacture some weird conflict or theme and shove it into the middle of the 25th fart joke of the film. 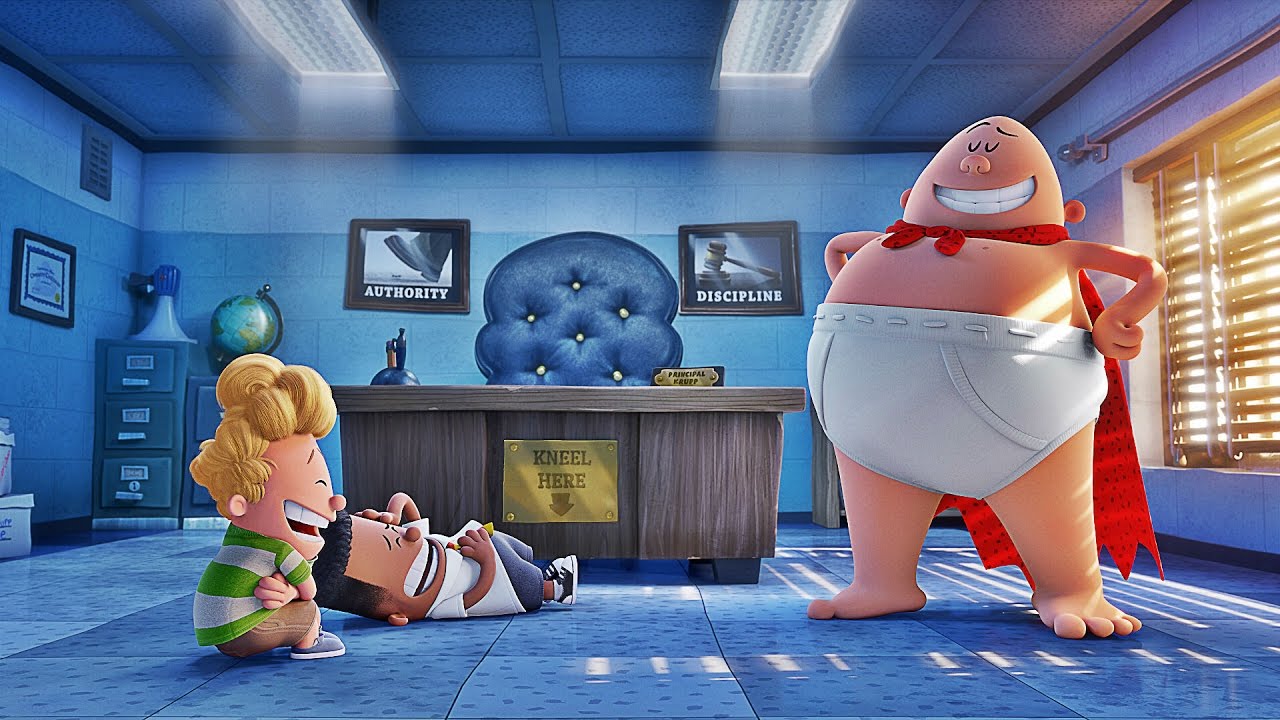 Primarily, Captain Underpants knows that it’s audience probably hasn’t hit puberty yet.  Knowing the film’s audience is a feat that many teams behind films fail to comprehend.

As you might imagine, Captain Underpants is an incredibly creative film.  Yes, there are plenty of poop and fart jokes in this movie.  However, they (along with many other silly moments) are done in such a way that is incredibly inventive and clever.

Both Kevin Hart and Thomas Middleditch’s characters consistently break the fourth wall to convey multiple concepts.  As Deadpool showed us, breaking the fourth wall can bring some hilarious moments to a film when done correctly.  Captain Underpants follows a similar template by using this device in any way it sees fit.  Sometimes, it’ll be used to introduce characters.  In other cases, it’s a way to stylishly setup a joke.  It’s even used to provide fan service for fans of the books. Amidst its colorful, energetic nature, Captain Underpants isn’t afraid to get really, really strange and bizarre.  It helps that the inherent premise for the film is so crazy, but those behind this film embrace the stupidity of the source material and create some bold, weird sequences.  It takes some serious stones to stop the movie in its tracks to cut away to a sock-puppet reimagining of a future consequence that includes robots and a massive turtle.

While I spent the last two sections of this review praising Captain Underpants‘ originality and eccentric qualities, this might alienate some audiences.  If you find yourself a bit annoyed by the film from the beginning.  Spoiler alert: that feeling isn’t going to go away.  The tone of Captain Underpants is so unrelenting and in you face that it may only speak to a cult following.

For all the positives that I’ve mentioned, it’s very possible that another person may hate these elements altogether and call me an idiot and refuse to read my reviews from that moment on because they believe I don’t understand film.  Without your full attention or acceptance of some wacky plot points, you may very well have a terrible time watching this film.

However, for those who are converted, sit back and prepare for some insane hi-jinks!

This may be a smaller detail, but it’s pretty hilarious.

Jordan Peele is another voice talent that populates Captain Underpants.  Unless you look up his IMDb page before seeing the movie, Peele’s voice is practically unrecognizable in the film, making it even more hysterical when you learn of his role in the film afterwards.

Surprisingly, Captain Underpants: The First Epic Movie is a really fun film that works.  Although it was severely beaten at the box office by Wonder Woman, it deserves your money and is certainly better than a ton movies already in theaters.  It gets an A-.  The film is only 84 minutes, so go out to the theater for a refreshingly quick film that’ll entertain both adults and children.

Influenced by your review and recommendation, I took my kids to see this movie yesterday. My son absolutely loved it — he’s been making ‘Captain Underpants’ comics nonstop since we left the theatre. My daughter enjoyed it, too, though some of the jokes flew over her head. My friend and I were laughing ourselves silly during some scenes (and we particularly loved the joke about how teachers are shafted — so true!).

Thanks again for the rec! :)

I’m so happy I could help! That’s what I’m trying to do here with the site!

Nice work! I really enjoyed the film myself! You can check out my review of the film if you’d like!

I’ll have to do that!

Here’s the link to my review:
https://d1n0mann94.wordpress.com/2017/06/03/review-captain-underpants-the-first-epic-movie/

I read some of the books because my brother’s had them and I thought they were just hilarious. I kinda want to see this because I did like the books and I love the voice actors in this movie, like Kevin Hart.

If you enjoyed the books, then you’ll love this movie!

Yeah, I felt the same way. It was silly and knew it was and it wasn’t bad.

Sometimes that’s all you need in a film!