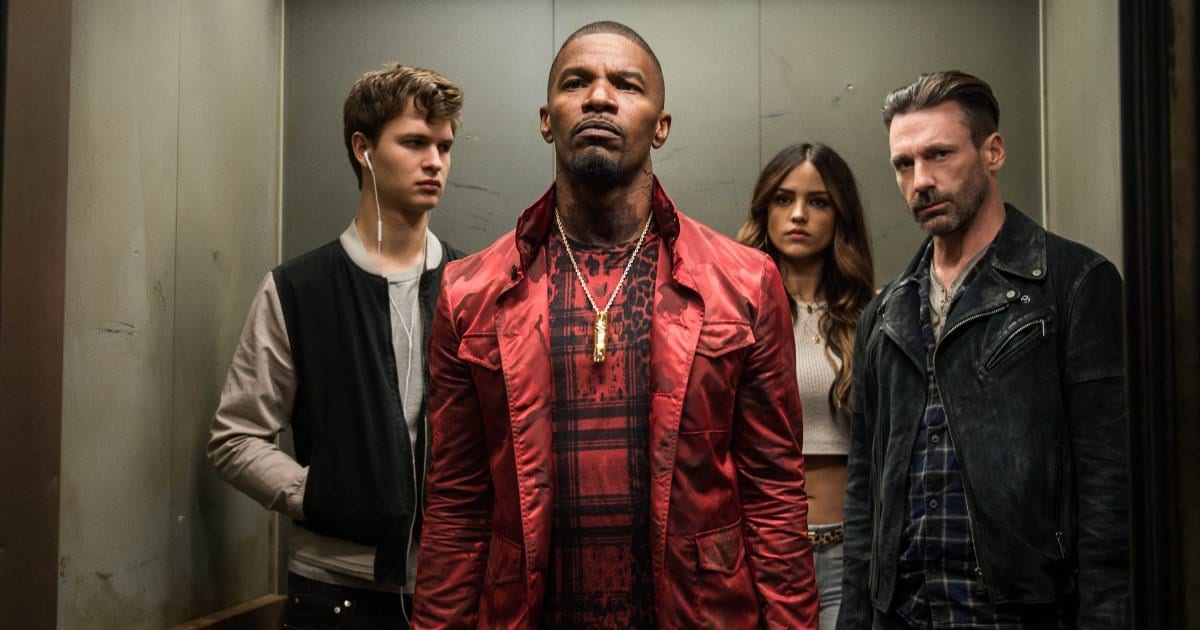 In a summer full of studios releasing the third, fourth, or even fifth installment in a franchise, it’s nice to see an original film get some buzz.  Edgar Wright’s Baby Driver is that film.  Filled to the brim with talented actors and actresses, Baby Driver seems to be primed to become a sleeper hit among moviegoers.  But will the movie be Edgar Wright’s first box office smash?  The following review will be spoiler free.

Baby Driver is directed by Edgar Wright and stars a lot famous people including Ansel Elgort, Lily James, Kevin Spacey, Jamie Foxx, and Jon Hamm.  Baby (Elgort) is a young, talented getaway driver that’s considered the best in the game.  After getting into an accident as a kid, Baby uses the tunes of his personal soundtrack to drown out his tinnitus, which also turns him into the best getaway driver around town.  However, Doc (Spacey), a local crime boss, forces him into a wild heist that threatens his life and the life of his love.

Sometime around May of 2014, it was announced that Edgar Wright and Marvel Studios were parting ways and that Wright would no longer be working on the adaptation of Ant-Man.  It appeared that the split was over “creative differences,” whatever that nebulous term means.  Wright has always curated fascinating films that are wholly original, so many were disappointed to see him leave that project.

However, quickly after leaving Marvel Studios, Wright embarked on another project that would later form into Baby Driver.  In a nice move, Wright actually put actors that he was planning to cast in Ant-Man into the film as well.

While his departure from Ant-Man was certainly a downer for many fans around the world, maybe a great film would go a long way in healing that wound.

Literally everything in Baby Driver is edited to the tune of the carefully chosen soundtrack.  There are more obvious instances where this is the case, such as Baby dancing or singing along to the lyrics (there’s a lovely, long take where Baby does so during the opening credits).  However, there are also far more intricate moments that show off just how talented Edgar Wright is as a filmmaker.  Gunshots ring out to the beat of the music.  Dialogue fits in with the tune.  Hell, even the relationships in this film have a deeply rooted connection to sound. Edgar Wright meticulously chose the soundtrack to the film, looking for the perfect addition to every single scene.  In all honesty, he may have done just that.  It’s truly unprecedented.  Baby Driver is edited with such perfection and touch that every scene flows with the upmost precision.  There was a clear feeling throughout the film that there was a man behind the camera working through every single frame to make sure the music, the dialogue, the action, and the sound effects all worked in tandem.

The enjoyment of Baby Driver from this technical perspective is two-fold.  For moviegoers that have a finer, more critical eye, they’ll appreciate Baby Driver for its masterful editing aspects.  For the casual moviegoer, you’ll love Baby Driver for how catchy and energetic it is.

Edgar Wright has always been an underrated filmer of action.  Movies like Shaun of the Dead and Scott Pilgrim vs. The World have definitely shown this ability, but Wright’s abilities in this aspect have always been forgotten.  In Baby Driver, the action takes center stage, forcing everyone to finally realize how well-rounded Edgar Wright truly is.  The first act of the film heavily features the abilities of Baby as a getaway driver.  As you might imagine from the snippets of action within the trailers, these set pieces are a hell of a lot of fun.

The chases are shot with great fluidity, only cutting when absolutely necessary.  Edgar Wright allows the audience to sit back and watch all stunts take place.  One of my biggest critiques of action movies recently has been how they use multiple cuts every second as if they are trying to disorient the audience into thinking they’re watching a good action set piece.  Thankfully, Baby Driver does the exact opposite while still providing a very believable experience.

I’m unsure how much driving Ansel Elgort did in the film, but Edgar Wright edited this action sequences together in such a way that you could leave the theater thinking that a stunt double was never used.

Underneath the energy of the soundtrack and the breathtaking action is some great dialogue and heart.  Edgar Wright films always have impeccable dialogue, allowing the simplest of dialogue scenes to be super entertaining.  Baby Driver no different.

Each moment sizzles with sharp, snappy dialogue between characters who look like they are having a blast doing so.

Every member of the cast gives a great performance, but two of the standouts are Jamie Foxx and Jon Hamm.

Foxx spits out dialogue so quickly and furiously that you’re in danger of falling behind.  He saunters around with serious swagger that only elevates the film.  Jon Hamm operates in a similar fashion, acting as a cool cat that you do not want to see blow a gasket.

Everyone looks like they are having so much fun performing, and that attitude is incredibly infectious.  It helps you to buy into all the heart, hilarity, and chaos that occurs.

There’s some serious tonal shifts that would’ve felt incredibly jarring under different direction.  Luckily, Edgar Wright knows exactly how to weave into different narratives threads, all the while proving once again that he’s one of best directors working today.

At the end of the day, Baby Driver is fun, energetic, and clever.  Edgar Wright has once again delievered a smart film full of thrills.  It’s central romance is very underwritten, keeping it from being one of the best films of the year.  But, it is still derserving of a solid A-.  If you weren’t considering seeing this movie, then you should now.  As it stands, Baby Driver is the best movie of the summer and deserves your attention.  Is it a perfect film?  Absolutely not.  But there is so much fun and exuberence to this film that they vastly outweigh any negatives.

We all want more original films, and here’s a great one for you to support.  GO SEE THIS MOVIE!

[…] like a child, (their TV is entirely too small) and I was blown away. All I knew going in was that Edgar Wright was an intriguing director (having only seen Baby Driver at this point). I also knew I liked […]

I enjoyed reading this! I definitely had some of the same thoughts while watching. The camera work and music were just incredible. Even during slower moments, the camera work in this film stood out above most. But I do have a slight complaint with Kevin Spacey’s character. While Spacey himself was incredible, his character was just too inconsistent to be believable. While I think a better Doc would have made for a stronger movie, I do not think he detracts enough to undo the positives of the film. Overall, I found it to be fantastic.

Hmm interesting! I didn’t have any gripes with his character. If anything, I had an issue with the romance.

It just seemed like we got three or four different versions of Doc, and none of the changes were really explained. And, yeah, I can’t argue with that. We were just expected to accept the romance; it was never truly earned. Still, very fun to watch!

Exactly, I just had too much fun with everything else that I didn’t care!

Caught this today. Loved it, especially from a technical standpoint. Like you say, the editing is masterful, sound and vision matching up perfectly. It also has one of the best opening scenes I’ve seen in a long time. Great write up. I’m sending people here to read your review as i cannot be bother to write one!

Lol thanks so much! I’m honored that you feel highly enough of my thoughts!

Saw this one yesterday. Nice to find a summer movie that wasn’t a sequel. The acting was excellent, Jamie Fox played a guy you love to hate.
That said, I didn’t love the movie. Once was enough for me :)

Ohh well, some movies aren’t for everyone! Thanks for your thoughts!

I have yet to see it but I read an interview with Wright and he was very proud of the fact that Baby Driver was one of the only original films made amidst all the remakes, reboots, etc. So I’m quite excited to check it out.

Yes! It’s nice to have soemthing that’s a little different!

Awesome review! I’ll be seeing the film for a second time tonight and completely agree with all of your points! Please check out my review: https://nerd-feed.com/2017/06/20/baby-driver-movie-review/

I need to see again sometime soon too! It’s too enjoyable not to!

Nice write-up. I’m looking forward to catching this over the weekend.

It’s certainly worth your time!