A village finds salvation through a holy motorcycle in this absurdist Indian satire. 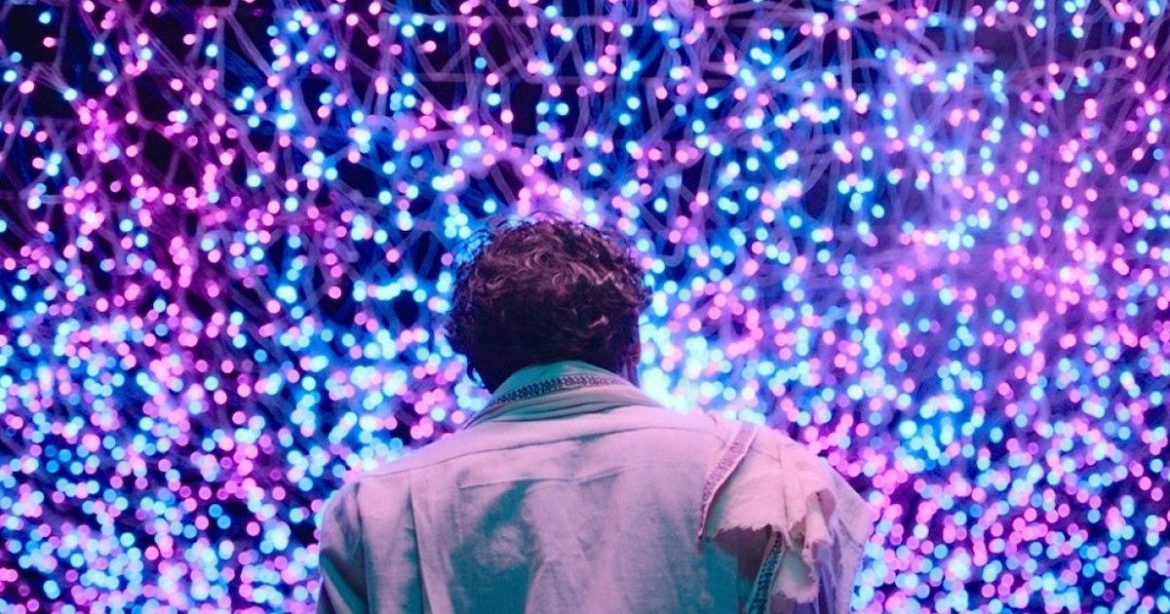 Under the bright glistening haze of blue and pink lights, Ritwek Pareek’s vibrant debut feature opens on 40-something drunkard Thakur Lal. His internal monologue spouts vague philosophical musings before mounting his motorcycle and going for a ride down a highway while intoxicated. A gruesome accident soon occurs where Thakur falls off his bike and is then run over and bisected by a truck. The bumbling local police tend to the scene and impound the bike overnight.

However, the vehicle disappears from the station the next morning (despite the gas tank siphoned and the chains and locks both unbroken) only to discover the bike has miraculously returned to the sight of the accident. Stronger more desperate measures are taken by police to secure the bike at the station, but all to no avail as the bike keeps inexplicably returning to the crash site on its own. The bizarre phenomenon captures the attention of the villagers, reading it as a sign from the heavens, believing that Thakur is now a god whose spirit inhabits his old dug dug motorcycle.

Inspired by both real events and Pareek’s own experiences of visiting temples with his grandmother in some of the most remote villages in India, Dug Dug is an absurdist look into people’s honest faith; the instinctual human desire to find answers for the things that are beyond what we can explain. Pareek presents the situation of a magical holy motorcycle that will grant wishes if you leave an offering of the thing Thakur treasured most in life (alcohol) to be as surreal and ridiculous as it sounds on paper, but does pass judgment or ridicule the characters for their beliefs. It’s very reminiscent of the excellent yet criminally underseen Moroccan film, The Unknown Saint in how it presents its believers, providing thoughtful exploration in what makes people believe but also finding humor in their foibles without lampooning them. The cynicism is instead reserved for how quickly religion can spread like wildfire and then inevitably be commercialized.

The fast-paced, Edgar Wright-esque montages of the religion’s rapid growth and the massive amounts of money they are raking in (complete with perfectly timed whip-pans, crash zooms, and the infectiously upbeat soundtrack by Salvage Audio Collective) are cleverly juxtaposed with the visual metaphor of an old man blowing up an oversized spotted pink balloon, expanding larger and larger as the religion grows in numbers. Soon enough, caravans of pilgrims start traveling to the sacred motorcycle, Thakur’s name is plastered across businesses for good fortune, the blessed bike’s image is slapped on trinkets and souvenirs and sing their praises of Thakur through a banger of a Hindi dance track while on a holy march. A charitable trust is also founded, whose bottomless pit of donations are skeptically never disclosed as to what they will be funding. However, Dug Dug is strangely not overly critical toward how religion despite good intentions is often a slippery slope to avarice and greed, but Pareek’s focus is firmly on the almost contagious fervor that religion can manifest.

Ritwek Pareek admits reality in India is far more absurd than anything presented in Dug Dug, nevertheless, he captures an exuberant, colorful portrait of rural life and a hilarious satire on the commodification of religion. Pareek has announced himself as a filmmaker to watch with his remarkable debut that is one of the best films of 2021 so far and a must-see in TIFF’s programming this year.

Dug Dug is screening in cinemas and online as part of TIFF from September 9-18. For more information and to view the full program, head to tiff.net.

Thank you for reading! What are your thoughts on Dug Dug? Comment down below!