‘Stop! or My Mom Will Shoot!’: Is This Stallone’s Most Embarrassing Film? 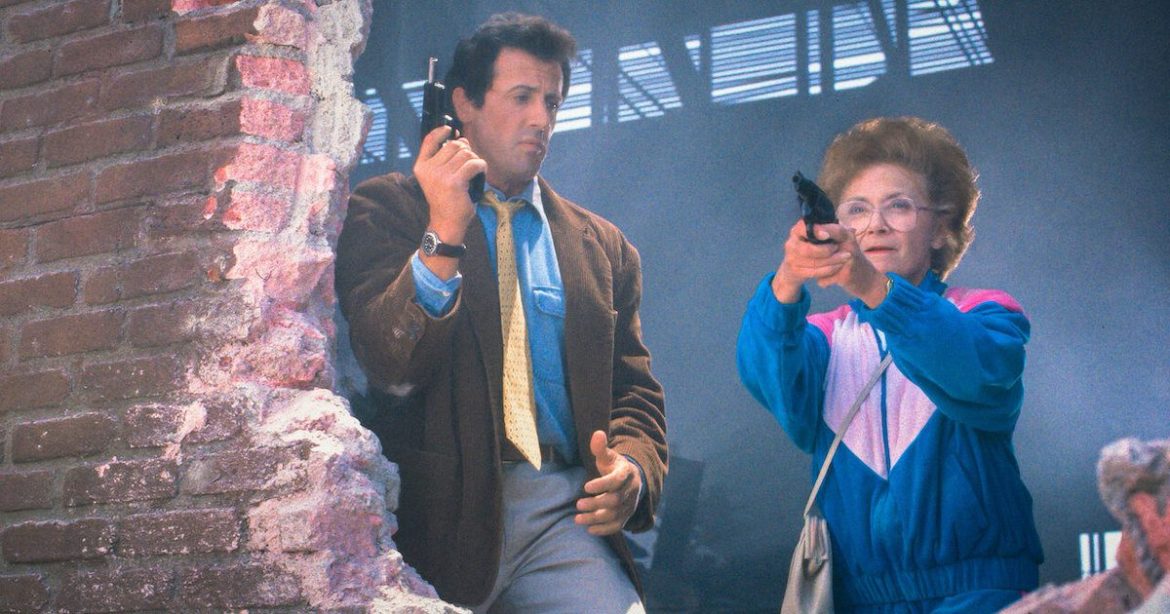 I had a choice between writing a retrospective on David Lynch’s haunting Lost Highway, or this embarrassing 1992 comedy starring Sylvester Stallone and Estelle Getty. Every reasonable cineaste would naturally choose the former. One movie has historical merit, the other one certainly does not. One movie has been hailed as a masterpiece, the other one has been hailed as “maybe one of the worst films in the entire solar system, including alien productions we’ve never seen,” by Stallone himself.

But as some of my readers know, I have a strange affection for comedies loathed by its own leading man. Seeing as the film is now thirty years old, I thought it would be the right time to revisit it.

Though I must admit, after rewatching it after all these years, I had a difficult time finishing it.

Is This Stallone’s Most Embarrassing Film?

To be fair, Stallone has headlined some truly dismal films in his time, such as Driven; D-Tox; those cheap Escape Plan sequels only a handful of people in the world have seen; The Specialist (which is admittedly worth seeing just for the deliciously hammy performances by James Woods and Rod Steiger); and The Expendables 3, which had the brilliant idea of making a movie starring some of the biggest names of R-rated actions films and have it rated PG-13.

Not to mention Stallone directed Staying Alive, the rightfully forgotten sequel to Saturday Night Fever. The best description I can give you for Staying Alive is that it’s like SNF but deprived of all its grit and interesting character development, which is then replaced with a near-fatal dose of 80s coke-fueled cheese.

Of course, there’s also Rhinestone, that brilliant work of art that paired Stallone with Dolly Parton. I must admit to having a blast watching this as a child with my mother so I can’t bring myself to dislike it.

Then there’s 1995’s Judge Dredd, a film that is a prime example of Hollywood turning great material into moronic schlock. But its great production value and over-the-top performances (especially by Stallone itself), make it an enjoyable watch, even if it craps all over the great source material.

Then there’s a SOMMWS. I must admit, that I loved it when I was a kid. This was probably due to Estelle Getty’s presence as I had a strange obsession with The Golden Girls.

In case you were one of the lucky ones who hasn’t seen this movie, here’s the general plot: Stallone plays a no-nonsense, tough-guy cop, Joe Bomowski, whose only weakness is his domineering mother, Tutti (Getty). When Tutti accidentally becomes a witness to a gangland assassination, Joe is forced to work with his mother to solve the case. As they do, his mother keeps telling other women he’s single, that he used to be a bedwetter, as well as sharing adorable pictures of him as a baby — it’s truly “hilarious” stuff.

As you can probably guess from its premise, the film has exactly one joke: the tough cop is continually embarrassed by his mother. This one joke could work for an episode of a 20-minute sitcom, but it’s not enough for a 90-minute feature-length movie.

While SOMMWS is not a good film by any means, it does have its moments. The one thing that does work in the film is Estelle Getty. Getty was hilarious on The Golden Girls and she brings some of that charm to the big screen. Besides her acting, Getty was also a prominent activist for the LGBTQ community. If nothing else, please look into her activism work, since the stories surrounding her support are quite endearing.

SOMMWS garnered Stallone another one of his many Razzie nominations. Granted, I don’t care much for the Razzies (the same goes for the Oscars), but his performance in SOMMWS, is hilariously one-note. Throughout the entire film, he delivers his lines like a whiny eight-year-old child.

If you’re looking for a hardcore drinking game, just have a shot whenever Stallone cries out “mom!” and you’ll have alcohol poisoning in no time.

Stop! Or My Mom Will Shoot! is the product of the Hollywood craze of the buddy cop genre, which started with the massive success of Walter HIll’s 48 Hours and Richard Donner’s Lethal Weapon. There are some great replicators of this formula, such as Dead Heat (the zombie one), Red Heat (the one where Arnold Schwarzenegger plays a Russian), Running Scared, and Midnight Run.

But it also led to many career lows. There was Loose Cannons, the one that paired Dan Aykroyd and Gene Hackman (I wonder how many people actually remember that film). Collision Course, the one that paired Pat Morita and Jay Leno (it was so good, the studio shelved it for two years). Theodore Rex, wherein Whoopie Goldberg teams up with an animatronic T-Rex. (Yes, that one actually exists. Google it.)

Naturally, Hollywood tends to forget what makes these films good in the first place: a good script and chemistry between the co-stars.

Why Did Stallone Agree to Do This Movie?

The script for SOMMWS was first offered to Arnold, who immediately recognized the quality. “I read the script and it was a piece of shit”, Arnold said during a Jimmy Kimmel interview. Being a true Machiavellian genius, Arnold hatched up a scheme by spreading the false rumor that he was interested in doing the movie. When Stallone got word of Schwarzenegger’s possible involvement, he called up Arnold to verify whether this was true. Schwarzenegger said he was and commented that he thought that the central idea was “brilliant.” Stallone, desperate to top his Austrian rival, quickly signed on, hoping, in Stallone’s own words during an Instagram Q&A to, “fake him out,” but instead, “he faked me out.”

Admittedly, the original script was quite different. The original concept was closer to a black comedy. The mother character was almost an antagonist. But once producers cast Getty for the role, the character completely changed. “They hired the most wonderful woman to play the part, Estelle Getty,” said Stallone in the Instagram Q&A. “She’s like America’s Sweetheart, one of the Golden Girls. She’s the mother that everyone says, ‘God, I wish she could have raised me.’ It took all that tension away.”

Amusingly, Stallone joked in an Instagram video that he will one day produce and direct a sequel to SOMMWS for Arnold, which will be called  “Stop! Or Your Grandmother Will Beat Your Ass.”

Is It Really That Bad?

Roger Ebert said the film was “moronic beyond comprehension” and “utterly lacking in even the smallest morsel of redeeming value.”

Having rewatched it, I must admit it doesn’t hold up. It’s even too generic to be a so-good-it’s bad film. The film is filled with some truly atrocious dialogue — Estelle Getty pointing a gun at Stallone and saying “Go ahead, make your bed,” is primo cringe material. Whichever one of the three screenwriters (yes, I know) who wrote that line should be penalized.

The rest of the cast is thoroughly wasted. JoBeth Williams is the nagging, one-dimensional love interest. The late great Roger Rees is completely disposable as the main villain.

But it does bring out the occasional chuckle, if only for Stallone’s clunky performance and Getty’s undeniable charm. And truth be told, it’s hard to “hate” a film where Sylvester Stallone waves a gun around while wearing a diaper.

Thank you for reading! What are your thoughts on Stop! Or My Mom Will Shoot!? Comment down below!

‘The Fanatic’ is the Bonkers John Travolta Stalker-Thriller...