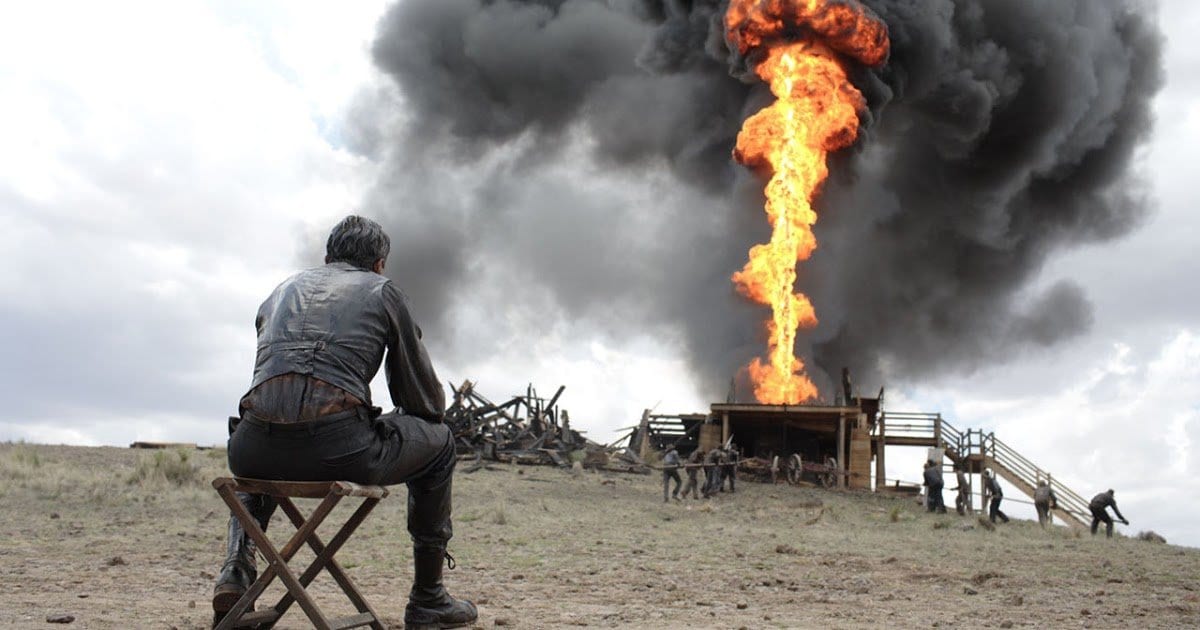 Early last week, as previously mentioned in my discussion of the best actors of all-time, Daniel Day-Lewis announced to the public that he was officially retiring from acting.  I know I speak for everyone when I say that his talent will truly be missed in the industry.  To honor his legacy, let’s take a look back at arguably his best performance in the film There Will Be Blood.  Touted by many as a masterpiece, the film stands among the IMDb Top 250 list.  But what makes this film so great?  The following review will be spoiler free.

There Will Be Blood is directed by Paul Thomas Anderson and stars the aforementioned Daniel Day-Lewis, Paul Dano, and Kevin J. O’Connor.  We follow Daniel Plainview (Day-Lewis) as his wealth grows as an oilman who is expanding his drilling areas by purchasing land in new areas during the early 1900’s in the old West.  However, as he comes in contact with more success, he faces growing oppositions, led by Eli Sunday (Dano) that operates a church and claims himself to be a “prophet.”  As the years go on, we see Plainview slowly lose his morality as the pressures of life and capitalism consume him.

Based primarily on Upton Sinclair’s Oil!, Paul Thomas Anderson’s script for There Will Be Blood has an intriguing backstory.

Eric Schlosser, the writer of the book Fast Food Nation (which has striking similarities to The Jungle), became more and more fascinated with Upton Sinclair which prompted him to read Oil!  Schlosser immediately went to the Sinclair estate to purchase the film rights.  Quickly after, he began the search for an able director to work on the project with him.  However, to his surprise, Paul Thomas Anderson actually contacted him with his own inquiry for the project.

Anderson quickly began working on a screenplay, but encountered some difficulties in creating a cohesive script that hit all the narrative beats he desired.  Luckily, Anderson soon understood the beats he was missing by visiting many museums that were dedicated to early oilmen.  His adaptation of Oil! quickly changed, adding other elements to the film that made the film stray away from the source material.

One of first things you notice as There Will Be Blood begins is the striking, bleak landscape in which the film takes place.  The entire films feels incredibly dirty and lifeless, showcasing sweeping, light-brown rolling hills are equally unpleasant and incredibly cinematic.  Everything about this film is just ugly, and I mean that in the best way possible.  While the landscape might just feel like a backdrop to the story, there are very clear parallels to the narrative. 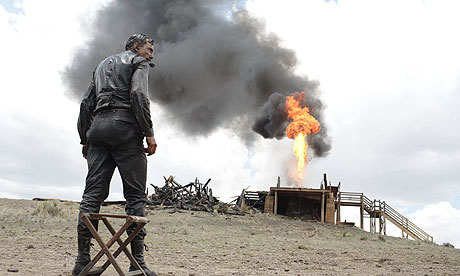 As we follow Daniel Plainview, he slowly loses his humanity and becomes cold as ice on the inside.  One could say he even becomes despicable as his exploits ensue, which then mirrors the desolate landscape that we see before us.

Obviously, the commodity at the center of this story is oil.  This black liquid envelops the screen at times, covering the actors as the entire set becomes dark.  The pursuit of this ugly commodity on this ugly terrain act to show that this pursuit of capitalism is, for lack of a better word, ugly.  Surely there are tangible elements that oil can help come to frution that the film overtly lays out (improved business, roads, crops, etc.).  However, without saying a word, There Will Be Blood tells us that the core of this story (and its main characters) are vile at their roots.

This theme is carried out by Daniel Day-Lewis in the role of Daniel Plainview to unprecented levels.  Plainview’s straight-talking, close to the chest attitude is perfectly conveyed by Day-Lewis.  I will go as far as saying that this performance is one of the best of our time due to its complexity and power.

There are certain facial expressions made by Daniel Day-Lewis that will make your jaw drop in astonishment.  There is pure anger and regret displayed here that only comes from real feeling, not acting.  Those who are familiar with Daniel Day-Lewis understand how effective his method acting is, but he takes it to a completely different stratisphere in There Will Be Blood. But what truly gives the performance its bite is how understated it can become.  Under the thick cover that Daniel Plainview hides himself under are serious regrets and fears that haunt him to his core.  They force each one of his decisions to be extremely calculated but appear brazen.  His outbursts become even more enthralling because of these traits.

A really fascinating portion of this film is the rivalry between Daniel Plainview and Eli Sunday.  On its surface it can appear as a battle between religion and capitalism.  This is a prefect reasonable and worthy takeaway from their interactions.  However, what’s really fascinating about this relationship is how each character mirrors one another, despite being incredibly different at the surface.

However, each man has similar fears that come from completely different points of view.  There’s a subtle chess game taking place here that slivers its way into the plot.  The conflicts become more and more intense until it all comes to a boiling point in one of the most powerful ending scenes ever put to film.  It’s the culmination of each character’s story in the most satisfying way possible. 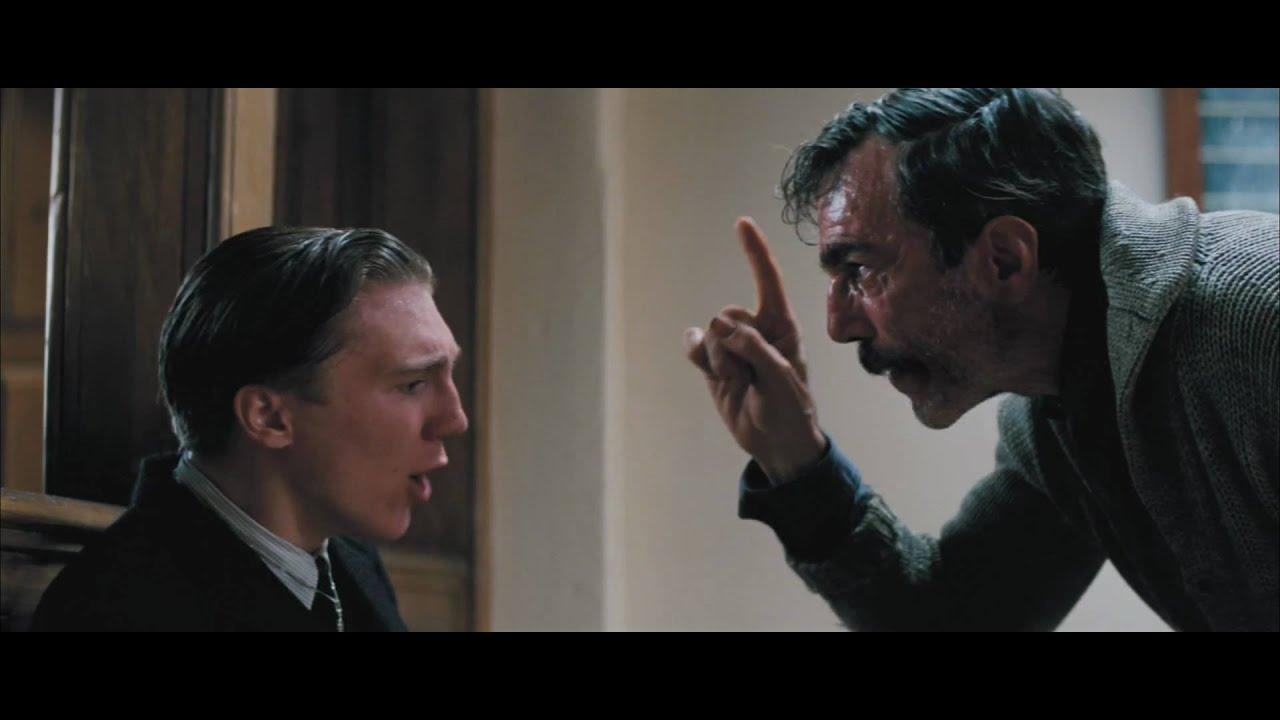 Suprisingly, I watched the film for the first time in preparation for this review, and it may already be among my favorite films once I update the list after my journey to watch every movie on the IMDb Top 250 list is complete.  There Will Be Blood absolutely gets an A+ and I highly encourage you to watch this film at your earliest convenience.  Not only does it include one of the best performances of the modern era, but it conveys very poignant themes that only the most skilled of directors can convey correctly.

If you enjoyed this article, please subscribe to MovieBabble via email to stay up to date on new content.

Great article! I am in complete agreement that There Will Be Blood is an absolute masterpiece. The movie is highly successful in depicting themes in which the bare bones can be applied to all aspects of society- thus highlighting the true impacts of capitalism at its extreme. Furthermore, I enjoyed the cinematography- it was gentle in aiding the storyline, but not overpowering to the rest of the narrative. For me, the sign of a weak film is one that heavily relies on cinematography and fails to provide a solid narrative- balance is incredibly important (great acting also helps!).

Complete agreement with you there! There’s also a really different score that the film uses which really adds to the tone of the film.

Great write up for an astonishing film.

In complete agreement about the environments, which almost take on the part of another character – so much so that’s there’s an incredible scene you haven’t mentioned: when Daniel & Henry (Kevin J O’Connor) arrive at the beach the environment literally opens up and it feels like the first time you’ve been able to breathe. You can practically feel the water washing over Daniel, gulping deep lungfuls of air.

Love that scene too! If I discussed every detailed from the movie I think I’d still be writing the review! Lol

Ha ha! I hear that! That’s one of the signs of a truly great movie!

It must be! Lol

I can’t believe I haven’t seen this. Daniel Day-Lewis is a fave. Such a powerful actor. Great post. ;)

Thanks so much! Watch it as soon as possible! You won’t be disappointed!