Not that he was ever gone, Nic Cage is back in fighting form for a delightfully meta action-comedy that serves as society’s reminder: Hollywood is more fun with Nic Cage in it. 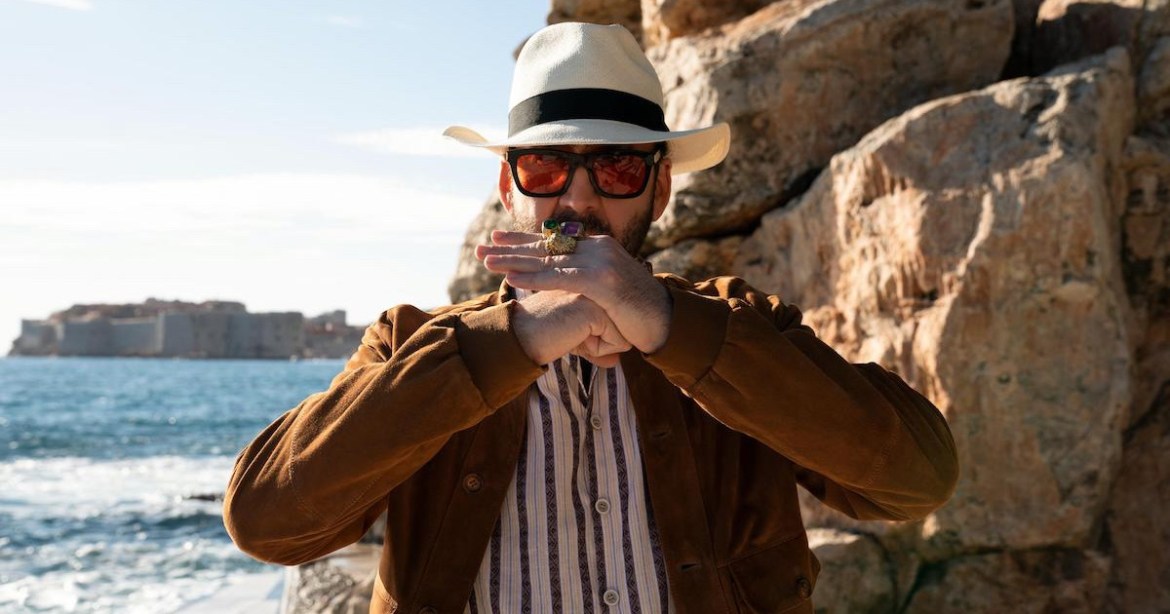 A year ago, Nicolas Cage starred in a small, buzzy movie called Pig.

When I wrote about it, I described his performance as somber and moving — an excellent Cage performance that put him back on the radar for something of critical acclaim, unlike the VOD films he’s used to remedy his financial situation over the past decade or so. And it is a performance worthy of serious recognition, but in many ways, the smallness of the performance only served as fodder for the tired Twitter take that Cage hasn’t always been a great actor. He’s just not the type of great that we’re used to celebrating.

Last month, Everything Everywhere All At Once debuted to rapturous and deserved acclaim; it instantly became one of my favorite films. A review of it that I read stated, “they say that less is more — but sometimes more is more. This film is a triumph of the more.” Everything that makes that film brilliant — its maximalism, its zany theatricality, its complete commitment to its bits — is what defines the acting talents of Nicolas Cage. He’s doing the most when he’s onscreen, and he does it so well that we start to think it’s easy — so easy in fact, that we decide that he is, in fact, a bad actor. But he isn’t. And in The Unbearable Weight of Massive Talent, we’re reminded that when Cage goes big, we’re all the better for it.

The Unbearable Weight of Massive Talent is an inside joke that everyone is in on.

The film begins with a premise that is incredibly accessible because it’s something filmgoers have asked themselves for forty years: what if Nic Cage was actually the guy he plays in his movies?

From there, the plot writes itself. He’s divorced and has a strained relationship with his teenage daughter, he’s clinging to the last vestiges of fame and fortune he has left, and he’s just desperate enough to accept a $1 million offer to attend a mysterious millionaire’s remote birthday party. But when the millionaire’s identity is revealed as a dangerous drug lord (Pedro Pascal), Cage is recruited by the CIA to assist in bringing him down.

What follows is what happens when filmmakers know how to give charisma the space to breathe.

Where even recent, strong Cage vehicles have failed (Willy’s Wonderland, Mandy, Pig, and Prisoners of the Ghostland just to name a few) is that they make the mistake of positioning Cage as a largely silent presence. Weird choice for an actor whose line delivery is legendary! In Massive Talent, writer/director Tom Gormican wisely cedes the vast majority of dialogue to Cage, who chews it up and spits it out with gleeful abandon; occasionally referencing back to famous moments in his filmography, but largely creating new moments out of this meta-scenario he’s found himself in. He’s depressed, he’s angry, he’s delighted. He’s tripping acid, he’s covering in prosthetics, he’s digitally de-aged. In 107 minutes, Cage gets to flex the full spectrum of his expansive range, and he feels completely at home in this stylized, larger-than-life version of himself.

As his primary scene partner, Pedro Pascal proves himself able to keep up with Cage’s energy in every way. Recent gonzo acting choices both in Massive Talent and Wonder Woman 1984 make one think that Pascal — with his charisma and energy — could be the heir apparent to the type of acting that few other than Cage can pull off. Few could make a drug lord so excitable, fill a supposed antagonist with such child-like wonder, or sell the zany spectacle of an acid-fueled espionage adventure alongside Hollywood’s greatest overacting leading man, but Pascal makes it work. And it makes you wonder why Disney keeps him locked away beneath that Mandalorian mask.

There’s little point in reviewing the plot or the surrounding elements of this film. No one (I should hope) is here for any of that.

The premise is sweaty, and some able supporting players (namely Tiffany Haddish, Ike Barinholtz, and Sharon Horgan as his ex-wife) don’t have all that much to do. But who the hell paid to see a Nicolas Cage movie where he plays Nicolas Cage, to not see as much of Nicolas Cage as humanly possible? And if you come for the right reasons, you’re going to have a blast. Nearly as much fun as Cage is having.

At one point early in the film as Cage is mulling a possible retirement from acting, Pascal pleads with him that his performances bring “joy and light to a dark world. And to turn his back on that is to turn his back on the entire human race.” Yet in this world, and the fictionalized version in the film, much of the human race has turned their backs on him. Since when do we not want movie stars who can completely sincerely speak lines about stealing the Declaration of Independence and scream about the bees? Who drive angry (in so many films), and who board a plane with an accent somehow worse than the convicts on board with them? I want more face-swapping, more bad lieutenants, more Memphis Raines, and more testicle explosions in the Ghostland. And I want it all sold to me by more actors who are cranked up to an 11 at all times.

But for now, we have just one — and he’s a massive talent, burdened with the unbearable weight of carrying this exaggerated, theatrical acting presence all on his own. The Unbearable Weight of Massive Talent is both a celebration of everything Nic Cage has given cinema and a thesis statement for why we still need him. And to that, I say, good. Give me more.

Thank you for reading! What are your thoughts on The Unbearable Weight of Massive Talent? Comment down below!