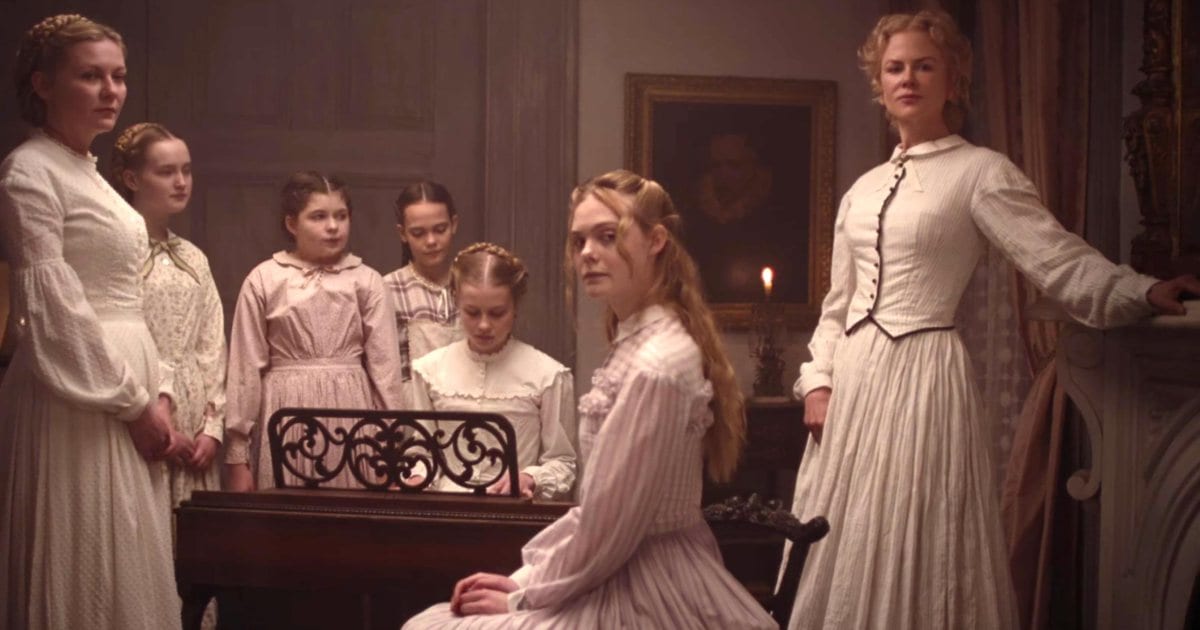 There’s been a few movies on the radar of cinephiles everywhere that gained traction at various film festivals earlier this year.  Sofia Coppola’s latest film, The Beguiled, is one of those films.  The movie has finally reached enough theaters for this critic to go see what it has to offer.  The Beguiled appears to be creepy and horrific, but is it worth the time of genre enthusiasts?  The following review will be spoiler free.

The Beguiled is directed by Sofia Coppola and stars notable actors such as Colin Farrell, Nicole Kidman, Kirsten Dunst, and Elle Fanning.  We follow an injured soldier (Farrell) during the Civil War that has been taken in by women at a girls’ boarding school in the South.  However, as the women take care of his wounds, sexual tension and dangerous rivalries occur, leading the headmaster (Kidman) to take action.  As the tension slowly begins to build, it appears that Farrell may have more nefarious issues to handle than jealous women.

Once The Beguiled was screened to audiences at Cannes Film Festival, buzz quickly grew as the film approached its summer released date.

The film was selected to compete in the main competition section of the festival.  This distinction is left for only the most competent films.  Even more honors were bestowed on the film as Sofia Coppola won for best director, becoming only the second woman to do so.

Sofia Coppola, daughter of Francis Ford Coppola, has slowly made a name for herself as a director, bursting onto the scenes with The Virgin Suicides and becoming even more prominent once Lost in Translation was seen by the masses.  Although it must be tough being the daughter of the director of The Godfather, Sofia has undoubtedly made a nice career for herself.  With The Beguiled, it appeared that Coppola was about to add another impressive film to her filmography.

image via The Little Theatre

Or so I thought…

It’s clear after watching this film that Sofia Coppola has a strong sense of what it takes to create atmosphere within a film.

The Beguiled takes place in the deep south, and you can feel it with every single frame.  From the onset of the film we are spoiled with views of trees covered in Spanish moss and hazy sunsets that heighten the warm weather of the territory.  Once Coppola adds the Civil War element to the film, you get a complete feel of the atmosphere.

Interestingly enough, The Beguiled has no score.  Aside from a few strums of a string instrument every so often, the film is enveloped in silence.  This is a very, very quiet film.  But, that does not equate to a boring film.

When you combine the eerie silence with its Southern backdrop, you encounter a complete sense of the film’s tone.  It’s rather impressive how Coppola allows you to get caught up in the film’s landscape without unnecessary dialogue.  It’s most likely this trait for why Coppola received her award for best director. 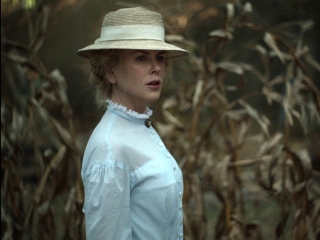 However, where The Beguiled falters is in its script.  I don’t believe this to be the case, but this film felt as if it was once a two and a half hour epic that was shrunk down during editing.  The pieces are here for a fascinating film.  But, there are serious flaws within the character motivations of each actor that are horribly underdeveloped.

The crux of this story relies on sexual tension.  This tension is brought on by John (Farrell) after he enters their home.  Unfortunately, relationships and feelings blossom out of thin air.  Sometimes, I sat wondering if I missed a half hour of the film even though I saw each scene play out.  Characters interact as if they’ve known each other for quite some time.  The reality is that they’ve only known each other for a matter of days. 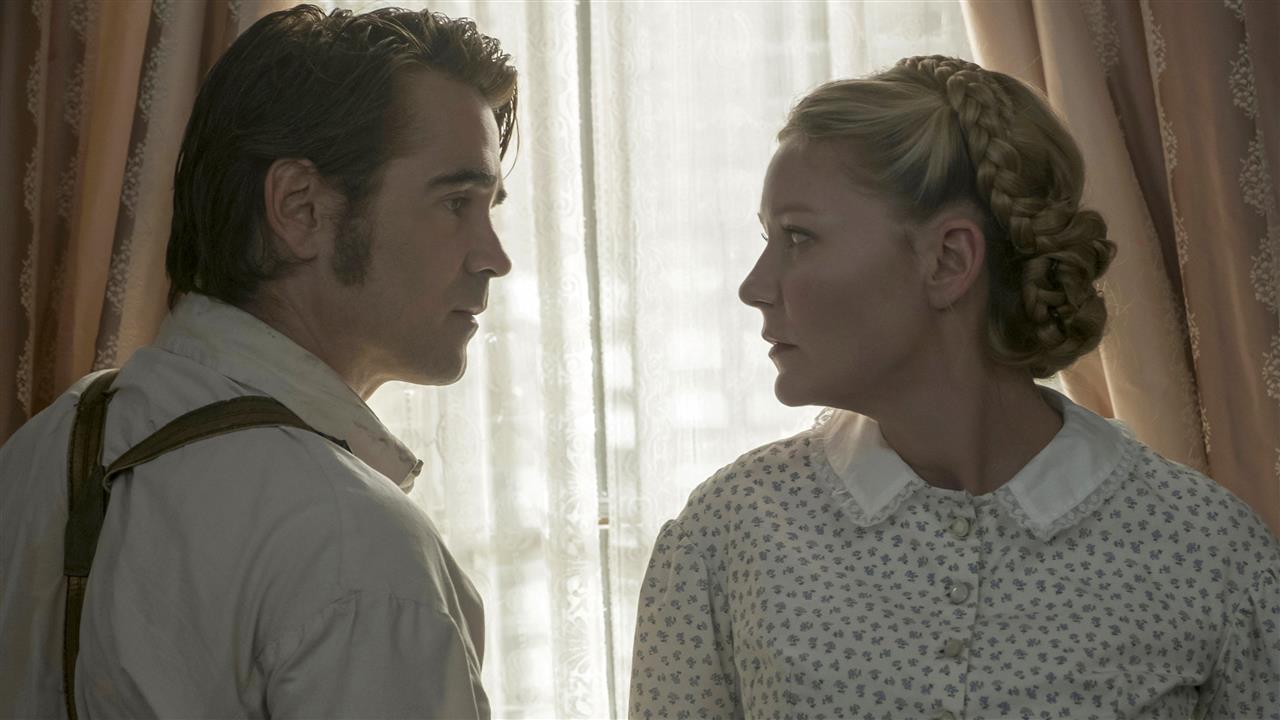 Each point of anxiety in The Beguiled relies on the bonds of each character to be strong and believable.  That’s sadly not the case here.  Each actor gives a strong performance, most notably Nicole Kidman as a stern, Southern woman.  There’s just no meat to these characters.

Motivations are paper thin, causing you to wonder how in the world each character got to their present state of mind.  Is it warranted that characters profess their love for each other after interacting for only the second time?  I certainly don’t think so.

Kirsten Dunst is at the center of this trouble.  She’s a lovely actress that once again proves her abilities in The Beguiled.  The problem is that her character is one of the weaker ones that I’ve seen in quite some time.

Once Farrell’s character enters her life, she becomes dependent on him.  Rather than prove to be independent, she falls for every single one of his gazes.

As the film progresses, some pretty reprehensible actions are committed.  Yet, Dunst remains attached to Farrell’s hip, unwilling to let go of a damaged man that merely looked her way.  It’s almost baffling how oddly characters act when faced with adversity. 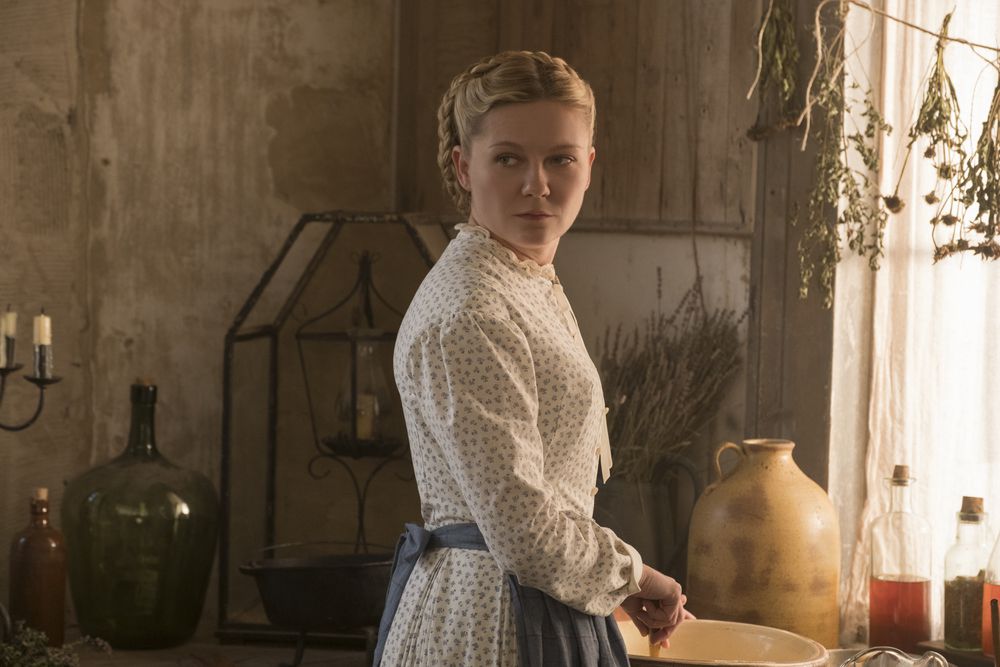 This notion facilitates the fact that hardly any of these characters are very likable.  In a film that revolves around tension, there’s a distinct lack of it.

The Beguiled had a lot of promise and boasts some very solid performances.  But in the end, there’s just too much in the way of making this film a serious recommendation.  It gets a C-.  This film shoots to have hidden meaning like films such as It Comes at Night but never really gets to that point.

Although there are some grizzly elements to the movie, the trailers for the film unquestionably misrepresented the final product.  While this did not affect my viewing experience (and my subsequent review), I would urge those looking to see this film to change their perceptions.

Thanks for reading!  What are your thoughts on The Beguiled?  Comment down below!

If you enjoyed this article, please feel free to subscribe to MovieBabble via email to stay up to date on the latest content.

Some Things Will Never Change with 'The Godfather Coda: The Death of Michael Corleone' | MovieBabble December 13, 2020 - 2:12 pm

[…] pales in comparison to the first two Godfather films. The first thing people usually mentioned is Sofia Coppola. Yes, the casting of Sofia Coppola as the doomed daughter of Michael Corleone was an embarrassing […]

Too bad. It was on my “to see” list. I never saw the original with Clint Eastwood. Did you?

I haven’t as of yet! But I am intrigued since I liked the idea of the story here just not the execution

I have seen many movies were I liked the idea but felt I could write better dialog.

Lol I know the feeling! The dialogue isn’t the problem here though, it’s mostly the story structure

I wonder if they changed much from the original? Maybe that is lame too? :-)

Who knows! I gotta check out the original to see!

Wow you have a great movie review site here I will be back!

Thanks so much my man! That means a lot!

I enjoyed this review as well as your comment interaction. I have seen the trailer for this movie and felt a spark to see it. After reading your review, I too have seen movies which seem to be evidence of tons of sacrificial editing. Not sure if I will see this movie while it is in the theater. Not because of your review but simply I don’t go to out to the movies often. There are many theaters where I live which are a bit on the crusty side. lol I would have to hitch a ride with another to go to a more cleansed location and that can be a hassle to arrange with 2 children in tow. Anyway, I appreciate your comprehensible and thorough review.

Lol I hear you there! Well I’m glad I could help you out regardless!

I really enjoyed The Beguiled, and I think a lot of what you were chalking up to a weak or underwritten script was intentional minimalism. I think a lot of the relationships between the female characters in the film are expressed through really subtle gestures and looks, not necessarily verbally. These women have been essentially locked away with no one for company but each other for a long time, so they have developed a bond and a chemistry that isn’t always friendly (in fact it’s often adversarial) but it is strong simply through their being forced to endure the hardships of war together. While John obviously doesn’t have that strong established relationship with any of the women, he attempts to use sexual desire to gain some power since he is incapacitated throughout much of the film. The film is about madness and power relations, and the way that people in extreme situations harness their power over one another, and I think that Coppola hit the nail on the head here. Glad to see that more people are seeing this movie, though, regardless of their opinion on it. Everyone’s tastes are different, but I had to comment because I had such an opposite response to the film.

Thank you for your thoughts! I can’t say I agree with that minimalism point of view. Even in movies such as Moonlight which display similar qualities have clear character motivations. I could see if you accept these relationships for what they are then you could really enjoy this film. Sadly, I couldn’t. I wish I could enjoy the film as much as you do.