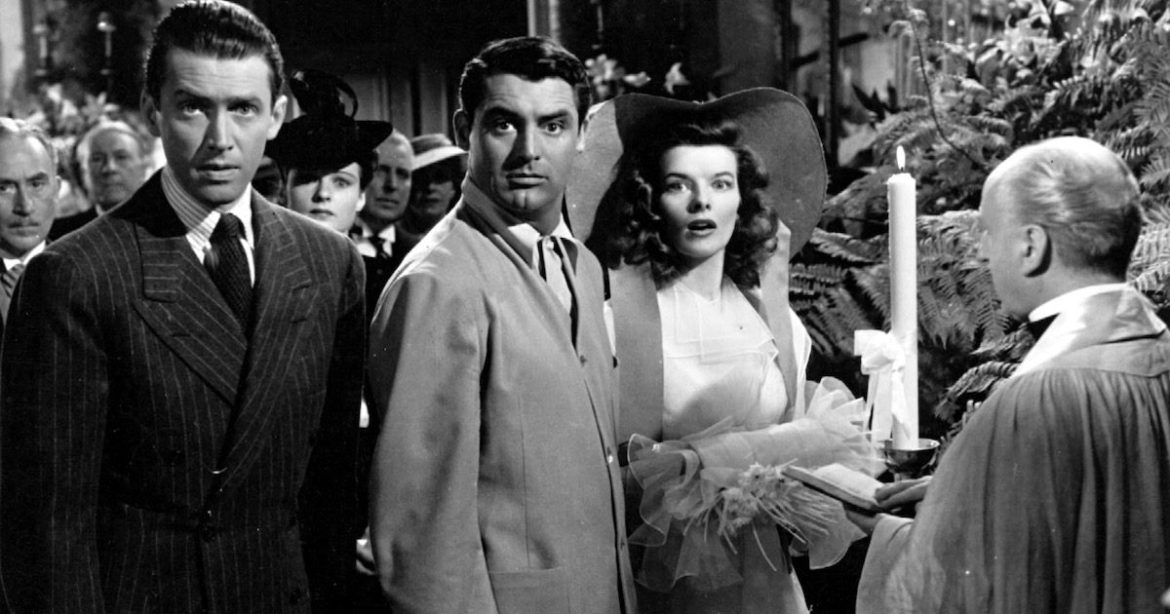 Two of my favorite actors are James Stewart and Cary Grant, so The Philadelphia Story is one of my favorite movies. Yet, I’m not blind to the fact that this movie…hasn’t really aged well. In the first ten minutes, we have an act of spousal abuse from a man we are supposed to be rooting for.

Then again, some parts are hilarious even today, like when Tracy (Katharine Hepburn) and her little sister, Dinah (Virginia Weidler), are pretending to be insane for the nosy reporters. That’s the plot of a half-hour sitcom right there. In fact, I’m pretty sure I’ve seen numerous sitcom episodes with that exact plot.

What I’m trying to say is that even though there are problematic parts, The Philadelphia Story still has its shining moments and shouldn’t be discounted.

I want to start with the good parts of The Philadelphia Story — the parts that still hold up today.

Like I said before, one of my favorite parts is when Tracy and Dinah pretend to be insane for the reporters, Macaulay Connor (James Stewart) and Elizabeth Imbrie (Ruth Hussey). It has the same kind of goofy comedy that I would expect from a modern sitcom. I especially love when Tracy introduces their lecherous Uncle Willie (Roland Young) as their father. That kind of on-the-spot comedy always seems to hit off well with audiences.

I also love the friendship between Connor and C. K. Dexter Haven (Cary Grant). Even though they’re both vying for Tracy’s attention, they never act maliciously towards the other, really. That’s what makes it a romantic comedy rather than a dramatic romance. I wish that more romantic comedies would choose this type of relationship between its male leads rather than an adversarial one.

There are a few things that don’t sit well with me in The Philadelphia Story.

First of all, the spousal abuse is concerning. Dexter never “socks” Tracy on screen, but he does grab her face and push her down, which seems almost worse. I feel like even back in the 1940s this would have still been pretty bad. I find it hard to root for a man who does that to his wife.

But then there’s the utter indifference to this matter among the family. In fact, the family seems to be on Dexter’s side most of the time, which is doubly concerning. Dinah often cheerfully asks if Dexter is going to sock Tracy again. Admittedly, that does seem like a little sister thing to do, but it’s also not appropriate. Like, would you really be on the guy’s side if he had a proven track record of abuse and alcoholism?

I find it odd how averse Tracy is to the reporters. Maybe I’m used to modern celebrities, but it doesn’t feel like the reporters are even getting very intimate at all with Tracy and her family. Is it really that much an invasion of privacy to have a reporter tell the world what you eat for breakfast?

I do wish we could go back to these days, to be honest. I would love to open up social media and not have to see another naked celebrity. That level of modesty is something I wish more actors and actresses would adopt. I do not care that you have a personal trainer and are taking a vacation on a secluded beach. Please stop showing me how rich you are and let me enjoy my poor life in peace.

Let Me Ask a Question

Okay, was it really that acceptable to just beat your wife in the 40s? I know there are jokes and memes about this, but was it as prevalent as this movie makes it out to be? Would not even the most unfeeling of audiences still see something wrong about the way Dexter treats Tracy? Considering how classic the movie is, I guess not. Gosh, we sure have come a long way since then.

I’m not a big fan of retroactively “canceling” things. I think history has some problematic things, but I think it’s important to look at them in context. The Philadelphia Story has some problematic aspects that I would not want people to emulate in real life, but it’s still a delightful little movie. Love triangles in romantic comedies are always fun, like in While You Were Sleeping and many other modern equivalents. Cary Grant, Katharine Hepburn, and James Stewart are such a powerful trio to see in action.

Basically, it’s a balancing act between recognizing the bad and loving the good. The Philadelphia Story has parts that are definitely not okay, but it also has wonderful moments. It’s a matter of being able to differentiate the two and not letting one overshadow your view of the other.

Thanks for reading, and listening! What are your thoughts on The Philadelphia Story? Comment down below!

[…] the beginning, Test Pattern feels like a romantic comedy, which is also reflected in the score. Renesha (Brittany S. Hall), a young black woman, is out with […]

A good film, although I prefer High Society. And yes, the spousal abuse sections definitely stand out.

“I do wish we could go back to these days, to be honest. I would love to open up social media and not have to see another naked celebrity. That level of modesty is something I wish more actors and actresses would adopt.” I so agree with this! I feel there’s just some level of modesty that we as a society have lost. We progress in some ways and regress in others.