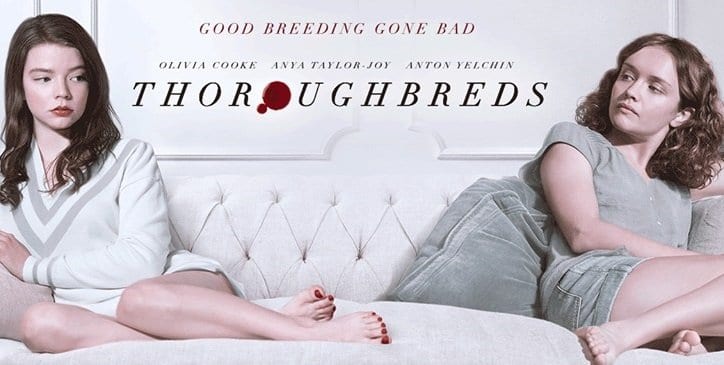 In the middle of large blockbusters released this month is a smaller, intimate film entitled Thoroughbreds.  With rising talent and a fascinating legacy that has already been formed before most people will get to see the film, this teen thriller is one of the more interesting gems of the first quarter of 2018.  The following review will be spoiler free. 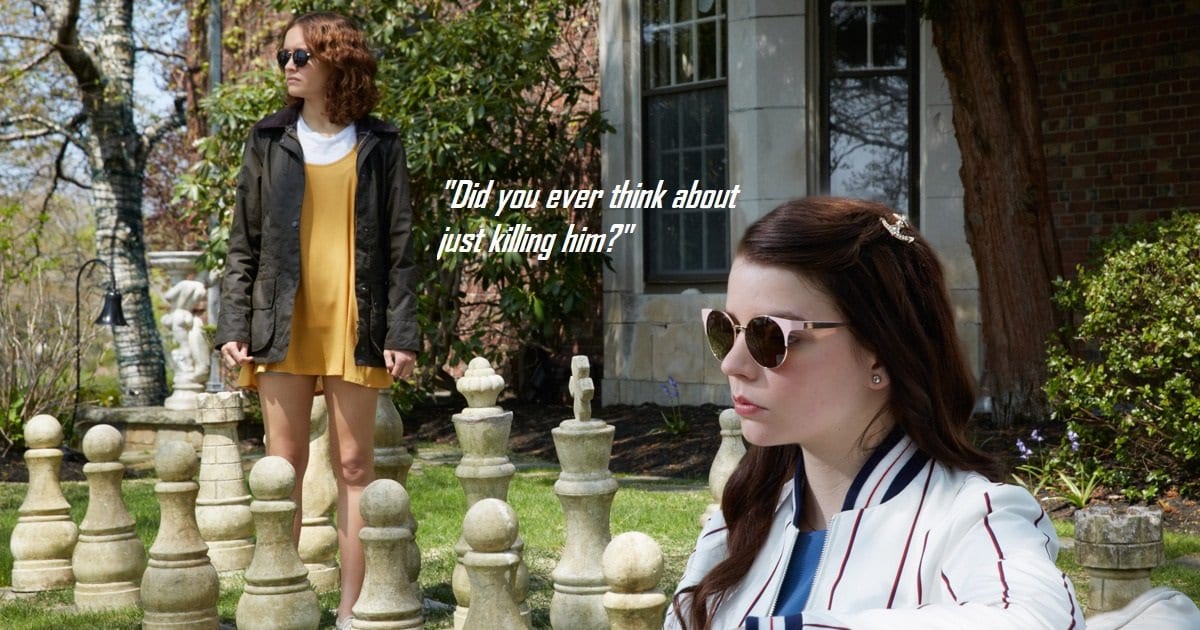 Amanda (Cooke) is an outcast.  Unable to emote for what she exclaims has been a considerable amount of time, she’s taken to mirroring the emotions of others (which isn’t exactly the best way make friends).  However, Amanda begins to reconnect with her rich, successful friend Lily (Taylor-Joy) who slowly becomes fascinated with the way that Amanda carries herself.

The notion that Amanda’s behavior is bizarre is always prevalent, but Lily has bigger problems to handle — her cruel stepfather (Sparks).  Fed up with the way he treats her, Lily reluctantly asks Amanda to help her kill her stepdad and end the torment once and for all.

While Thoroughbreds has two promising stars in lead roles, a rising talent behind the camera, and a fascinating premise to attract viewers, the predominant discussion around the film has taken towards a more depressing subject.  Namely, Thoroughbreds is the last time that Anton Yelchin will ever appear onscreen.

Yelchin’s death was undeniably heartbreaking when it occurred back in 2016.  Not only was the event itself the epitome of a freak accident, but it stopped him from becoming a household name — one of the bigger crimes of the last few years considering his talent level.  Thoroughbreds finished filming on June 5th, 2016, just fourteen days before Yelchin tragically passed.

The film certainly opens a wound that was close to healing for many movie fans.  Considering Yelchin died almost two years ago, it’s moderately harrowing to see him on the silver screen once again.  Thoroughbreds premiered at Sundance back in 2017, but Focus Features waited until now to release the film after purchasing it months ago.  Details of what caused the delay in its release aren’t apparent, but the move cemented the film as the last item in Yelchin’s brief but solid career — creating a legacy for the movie that will never be broken.

While it might be difficult to divert your focus from Anton Yelchin, the two stars of the film (Taylor-Joy and Cooke) are stars in the making, and you need to pay attention to them.  Both actresses have made solid career choices thus far that have highlighted their great abilities, and Thoroughbreds is an extension of what they’ve shown thus far.

Anya Taylor-Joy is perfectly cast as a girl who has had almost everything handed to her in life.  Her unique features work perfectly for the resting snooty look required of her as a member of the 1%.  Her outward appearance is defined by her life that is absurdly affluent, but she clearly wants more from her life.  Personally driven to create her own path to success, a piece of her always remains redeemable even as she struggles with rather irredeemable thought processes.  You understand that she is innocent at heart and quite conflicted even though her convictions grow sour over time.  As with Thoroughbreds as a whole, Taylor-Joy walks a fine line as Lily — but her abilities as an actress make her character consistently engrossing.

However, her counterpart, Olivia Cooke, might just be the showstopper of the entire endeavor.  Acting as a woman without feeling, Cooke is always monotone, acting with a sense of detachment that few humans can comprehend.  As a result, her actions are quite sardonic, offering most of Thoroughbreds‘ wicked sense of humor.  Strangely enough, she becomes the voice of reason as she’s able to analyze every situation through a cost-benefit analysis instead of what feels right.  As the movie makes an emphasis to point out, she’s incredibly robotic and cutthroat as she analyzes the best move through her detached line of reasoning.

Thoroughbreds Isn’t Very Bloody, But it is Thoughtful

One of the most noteworthy taglines for Thoroughbreds that is plastered on every piece of marketing material is that the film is “Heathers meets American Psycho.”  On a literal level, it’s fairly obvious to see where that comparison is somewhat applicable, but I would contend that Thoroughbreds is its own animal.

Director Cory Finley clearly makes a point to emphasize the psychology of the entire ordeal, cutting away from violence or merely showing the effects of violent acts.  With this idea in mind, the focus shifts towards feeling and what the lack of it can lead to in someone’s pursuit of success and purpose.  The prevailing thought these days is that all self-made billionaires need hints of ruthlessness and shear drive to get there, and that’s predominantly the sandbox in which Thoroughbreds likes to play.  Toying with this idea in a darkly comedic exercise creates an intriguing think piece on the pursuit of success and the need of emotional attachment.  A bizarre, percussion score (akin to a toddler banging on a drum on occasion) helps to accent the deep-dive into this movie’s form of psychology.

Former playwright Cory Finley excels in this regard, displaying a strong hand in creating such a discussion.

image via Next Best Picture

And that’s exactly where the fascination with Thoroughbreds may end for a lot of people — as a discussion.  Thoroughbreds remains so detached throughout its 90-minute runtime, becoming quite refreshing from the typical saccharine films released by major studios.  It asks the hard questions, but you get the sense that the film feels its cold core might alienate some audiences.  Rather than double down on its tone, Thoroughbreds wants to have it both ways — stay distant but also deliver a message that becomes quite heavy-handed in search of some emotional attachment with the audience.

In that sense, Thoroughbreds sometimes betrays what it wants to become, losing bite as a character study that keeps it from becoming some transcendent piece of art.  Cory Finley’s directorial debut amounts to an incredibly solid feature — but nothing more.  Luckily, great performances from an undeniably talented cast (I’d be remiss if I didn’t mention Paul Sparks for his awesome turn as a rich, obnoxiously health-conscious stepdad) keeps everything afloat. It’s definitely less violent than the marketing material and headline reviews would have you believe, but Thoroughbreds still has a wicked edge that is endlessly entertaining on multiple levels.  On a literal level, it’s engrossing to watch talented actors remain in a deadpan state as they discuss rather unpleasant actions.  On a thematic level, thinking about what Thoroughbreds has to say about empathy and remorse is continuously fascinating.

The film may not always stick the landing, but there’s no denying that it is a memorable work of art. Thanks for reading!  What are your thoughts on Thoroughbreds?  Comment down below!