Disney’s latest big budget adventure, A Wrinkle in Time, is a landmark production for a variety of reasons.  With its large budget and noticeably diverse cast, everyone at Disney from Bob Iger to the production assistants are hoping that this science fiction epic (emphasis on the fiction) can lead to great results for everyone involved — and change the industry moving forward.  The following review will be spoiler free. 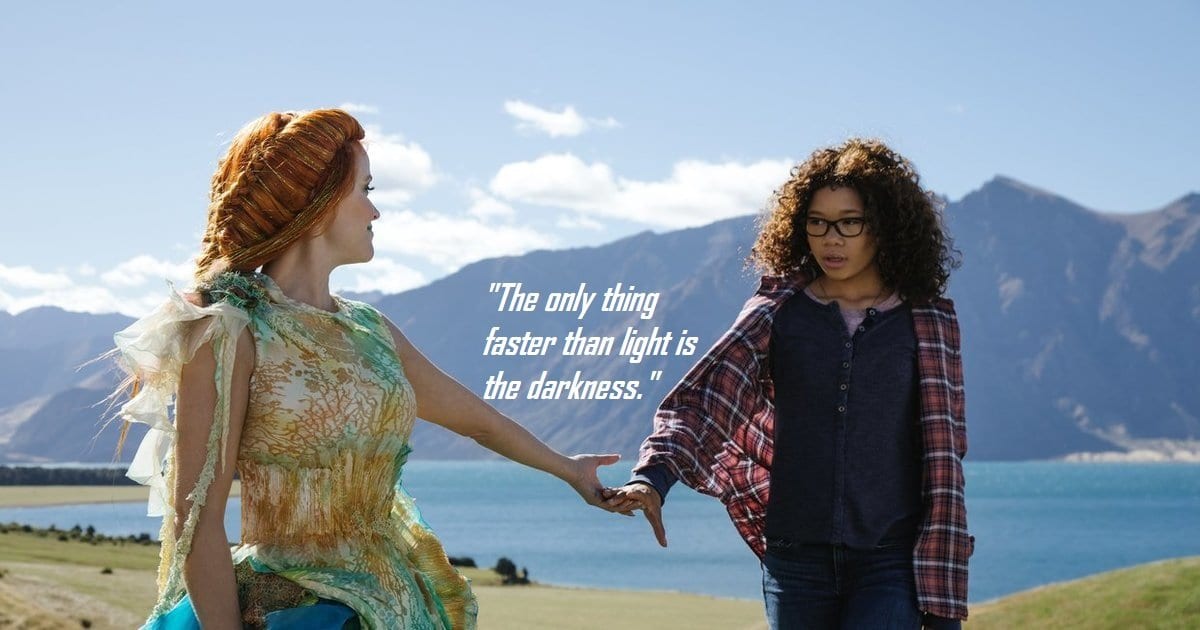 Still shook by her scientific father’s disappearance four years ago, Meg (Reid) has continued to act out in school, failing to meet her potential as a brilliant mind.

However, in a bizarre turn of events, Meg, her younger brother Charles Wallace, and her new friend Calvin (Miller) are visited by three entities: Mrs. Which (Winfrey), Mrs. Whatsit (Witherspoon), and Mrs. Who (Kaling).  The three alert the young children that Meg’s father is alive — billions of lightyears away.  Together, the group must travel through time and space — discovering other entities (some of them quite evil) — to rescue him.

Obviously the film is adapted from the classic 1962 novel written by Madeleine L’Engle, but A Wrinkle in Time has people buzzing for a completely different reason.

Following retaining the rights to make the film back in 2010, Disney announced that Jeff Stockwell was to pen the script for the latest adaptation in preparation for a production with an estimated budget of $35 million which was on par with other Stockwell scripts that were made into feature-length films (Bridge to Terabithia, etc.) as well as District 9.  Neill Blomkamp’s first film was a big influence for Disney to move forward with adaptation as it was clear that mid-budget science fiction could succeed if done correctly.

Later, however, plans changed.  Jennifer Lee later rewrote the script, shifting towards a bigger budget spectacle film.  Disney made headlines when it hired Ava DuVernay to direct the film — making her the first woman of color to direct a movie with a budget of $100 million or more.  That narrative has dominated the news in recent weeks leading up to the film’s release, adding more pressure on top of what is already expected out of a film with a nine-figure price tag.

The promotional material for A Wrinkle in Time called Ava DuVernay a “visionary director,” and the landscapes in the film would certainly support that claim.  Every frame of A Wrinkle in Time oozes with visual splendor and color.  Once the three misses (Winfrey, Witherspoon, and Kaling) come into the picture, the trio of children are transported to world after world with fantastical elements that stretch the imagination.  From folded dimensions to talking flowers, there’s something from a strictly visual perspective that makes A Wrinkle in Time interesting on some level every step of the way.

A fantastic cast rounds out this fantastical tale.  Let’s be honest, any film that has the goal of rescuing Chris Pine from certain death immediately wins over a majority of audiences.  The cast conveys an endearing sense of heart and purpose that mixes with the film’s visual elements for a combination that is the epitome of ambitious.  A Wrinkle in Time works to show both a massively scope blockbuster and an intimate, personal story that is rooted in self-growth.  In that sense, A Wrinkle in Time is never boring.  Its reach far exceeds its grasp for most of the film — but more movies should work to become just as bizarre.

As for the story itself, it’s incredibly uneven.  As the header above states, AWIT doesn’t stop to help its audience grasp the universe in which it lives.  This statement does not mean that a movie needs to hold the audiences’ hand as it moves through its narrative.  If anything, movies need to have a little more faith in general audiences to grasp their intentions.

A Wrinkle in Time leaves everything ambiguous to the point where you leave the film without a grasp for what’s possible and what isn’t.  As the movie plays out, you feel as if DuVernay is making up the rules of the universe on a whim.  Ava DuVernay and Co. have a strong grasp of the “what,” but they have almost no understanding of the “why” and “how.”  New characters come into the picture in a matter of seconds, only to leave after a brief display of their abilities.

It’s a bizarre balancing act.  On one hand, A Wrinkle in Time spends a lot of time showing the reach and power of different entities.  On the other hand, you never really understand the purpose for these acts.  The story is stripped to its bare essentials — and it’s not even close to cohesive.

From the first act, you immediately get the sense that A Wrinkle in Time isn’t very concerned with appealing to logic.  Characters merely show up because they need to for a story to occur (and other characters just accept it as fact).  Ava DuVernay has proven herself as a great storyteller in the past, and her resume makes the lackluster direction of A Wrinkle in Time even more perplexing.  This movie needed more tiny moments (i.e. pieces of character development, fleshed out backstories, etc.) for its emotional core to work — but nothing of that ilk is in the film.

Weirdly enough, even scenes from the film’s full trailer are missing from the movie.  Remember the scene in the trailer where Storm Reid explains how people can travel billions of lightyears in an instant?

Yeah…that’s not in the movie.

While it’s not the best practice to claim that a movie ran into studio meddling that cut down the runtime ahead of its release without any information that confirms it, A Wrinkle in Time certainly feels like the end result of such a problematic production.  This movie has nothing but its core ideas; no details prop it up.  Although it contains crazy worlds and entities that have otherworldly powers, nothing has a lasting impact.  Even the performances feel out of sync with the tone of the moment (not to mention a few horribly mistimed pop songs ruin dramatic scenes), leaving our young actors out to dry.

Throughout A Wrinkle in Time, you’re in constant state of “what?”  Nothing quite adds up in the end — leaving disgruntled viewers unphased by the film’s messages and social importance as they walk out of the theater.

A Wrinkle in Time is pleasantly ambitious and abundantly colorful, but those traits don’t make up for a stilted narrative that leaves its audience behind almost every step of the way.  The film keeps itself at a distance, failing to convey the wonders of its universe in hopes that flashy images will be enough to suffice.

A Wrinkle in Time feels like the Sparknotes version of its beautifully unwieldy source material.  The pieces are there for a heartwarming tale of self-discovery and magic, but something doesn’t quite add up — it never comes close to emotional resonance.

Thanks for reading!  What are your thoughts on A Wrinkle in Time?  Comment down below!

[…] Courte was rediscovered, that Varda became rightfully credited as the originator of one of the most significant cinematic movements in […]

I thought the movie was very undecided on whether it wanted to be a fantasy film or a sci-fi one.

I largely agree with your take on this movie! I scheduled a review for my blog this weekend.

I’ll have to take a look when it goes live!

Worst movie ever! Went with 5 ppl ranging from 11-42 & we could hardly keep our eyes open. The movie jumped around & Oprah’s skills were lacking at best! If you must see it, wait for it to come out of the theatre. Total waste of money!

I would agree there!

Wow – I would not have given it a D+. It wasn’t perfect, but I wasn’t expecting it to be. I read the book back in junior high and then again just a few years ago; the book goes into so much more detail than any film adaptation of it ever could. I enjoyed it for what it was – a fun, whimsical, more modern update of a classic novel.

Well I’m glad you enjoyed! As a critic I go into every film hoping for the best. I’m happy to see others find enjoyment in ways I couldn’t!

I do appreciate reading your reviews, though. Like you said, you go into every film hoping for the best. A positive mindset Is always good! ?

It’s sad that this movie seems to have not been great.

I’m going to read the book again this weekend, before seeing the movie. It’s been so long that I can’t remember anything other than the opening sentence.

I’d be curious to see how they differ!