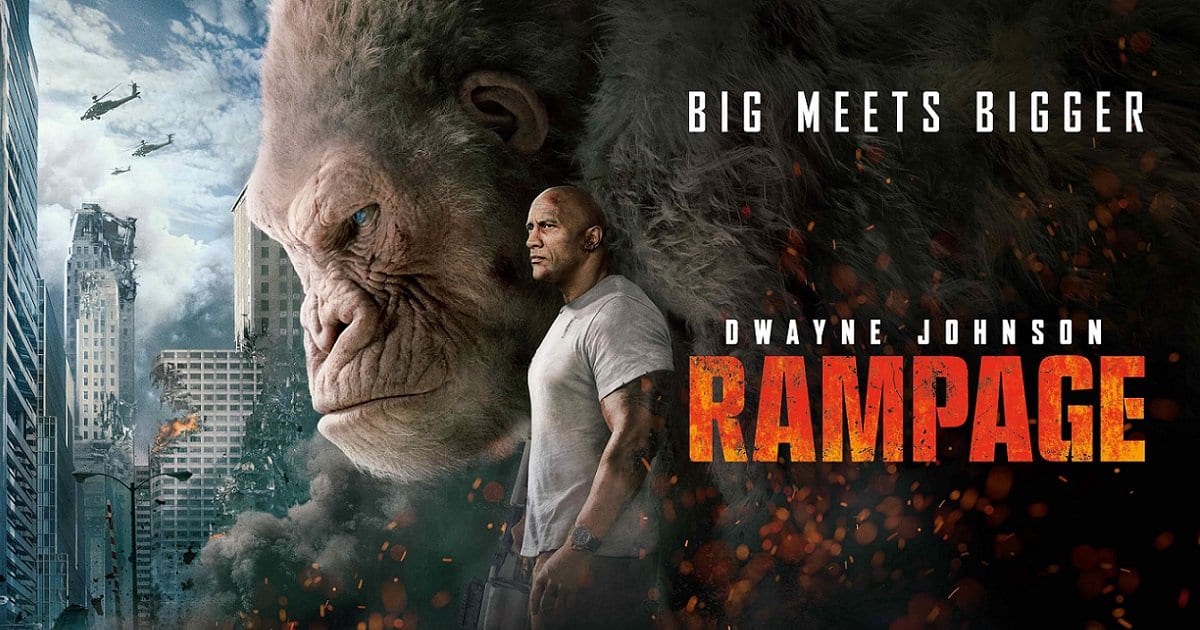 In age where the “movie star” seems all but dead, one — very swoll — actor is still raking in the dough as a leading man, forcing studios to pay him top dollar to star in their movies.  That man is The Rock, and he has enough charisma to power any average script to box office gold.  His latest film, Rampage, stars his oiled up muscles alongside a massive albino gorilla — what more could you possible need?

While Davis Okoye (Johnson) keeps his distance from most people, he’s created a strong bond with George — an albino gorilla that resides at an animal sanctuary.

Due to some unforeseen circumstances, a rogue genetic experiment mutates George and two other wild animals, causing them to grow in size and form an insatiable aggression towards anything in their way.  With the help of a former employee of the company that created the experiment (Harris), Okoye must find a way to stop the animals before they destroy all of Chicago.

Whether you realize it or not, Rampage is trying to break the video game movie curse as an adaptation of the 1986 arcade game where giant monsters attempt to evade large military forces in order to destroy a city.

When you think hard about it, it’s pretty hilarious that this is getting a movie:

And it’s turning into this:

At this level, “adaptation” is a very loose term.  Realistically, you’re taking the concept of a video game and turning it into an action sequence or two and then forming a movie around it.  Not that it necessarily matters how faithful the film is to the game (after all, they’re two different mediums and should be treated as such), but it’s a little silly to totally link the game to the movie, dontcha think?

Still, both of them have massive monsters that destroy cities, and that’s really all anyone would ever ask for out of Rampage.

A Talented Cast Knows Exactly What Movie They’re In

If you watched any of the promotional material for Rampage, you would know that the movie itself offers everything you could have ever imagined for a movie with a tagline that boasts “big meets bigger.”  If you ask me, they should have doubled down and said “bigger meets biggerer.”

Rampage is essentially a glorified B-movie with top-notch special effects (except in one instance where The Rock’s face looks like gelatin), and the cast certainly knows it.  The Rock brings all of his typical charm to another law enforcement character (side note: literally every character The Rock plays is some type of ex-military or law enforcement figure) as his muscles glisten in the sunlight.

As for the rest of the cast, they’re enjoying playing light characters that are serious departures from their usual characters or just caricatures of modern action character archetypes.  Naomis Harris signed on to act in the film shortly after winning the Academy Award for her haunting performance in Moonlight, and she’s happily enjoying the fruits of earning a large chunk of money for her hard work in an indie drama.  Then you have Jeffrey Dean Morgan — a cowboy that stumbled into a government job who loves listening to the sound of his own over-the-top Southern accent.

However, the best bang-for-your-buck, stand-out supporting performance is easily Joe Manganiello as a rough army squad leader with a cartoonish scar on his face that exudes testosterone and edginess.  His character is essentially worthless in the grander scheme of the actual movie, but you’ll remember him long after the movie ends. 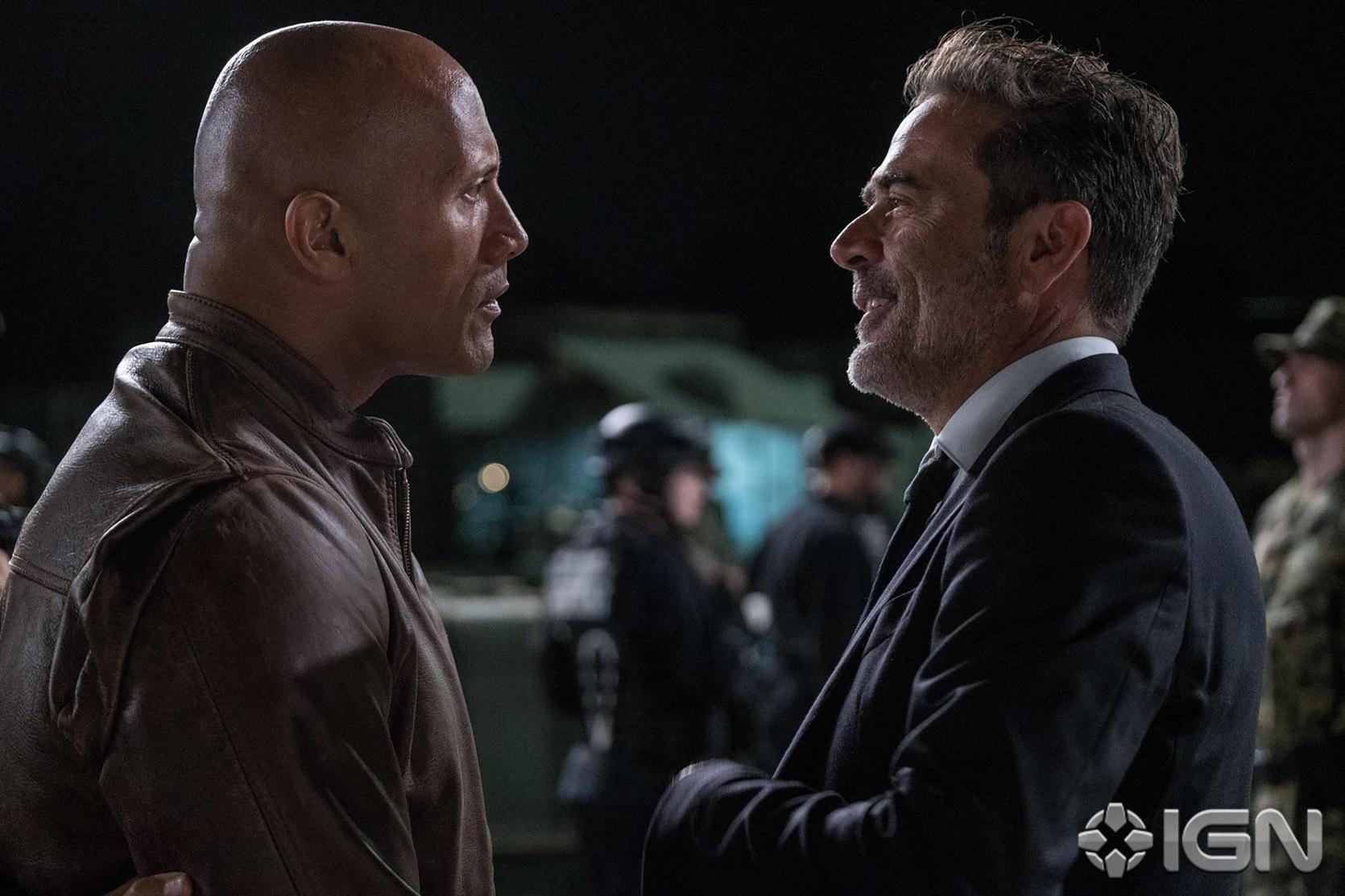 Rampage Speeds By at a Breakneck Pace

The first two acts of Rampage move at a delightfully insane pace, leaving you with no time to question its inconsistencies and overall ludicrous nature.  It shifts tone rather abruptly from scene to scene — most of the time incorrectly — but it’s in service to a silly movie that works like creature features from former decades.  It throws everything at the wall and latches onto anything that sticks.  It’s not in service to what a snooty critic would call a “film,” but it’s damn entertaining.

Below is essentially a write-up of Rampage‘s first hour:

Rampage jumps from scene to scene, embracing the stupidity and brainless aura that its script creates.  It’s certainly uneven, but it’s fun to watch a movie that embraces the weirder side, even if it’s only for a short while.

Then, the third act gets in the way, and that’s where Rampage lost me.  The bloated forty-minute spectacle is exactly where the movie wants you to have the most fun as three enraged monsters destroy downtown Chicago.  And yet, Rampage plays it straight, making it a dire situation that is rather humorless and generic.  We’ve seen giant monsters smack each other around with fallen debris many times before, you can’t just go back to that same well and expect the scene to be untouched by diminishing returns.

The score swells like a serious militaristic drama, adding a grandiose sheen that is out-of-place.  The colorful imagery even takes a step back as a depressing, greyscale look replaces it.  With a serious amount of destruction and rubble everywhere you look, the aggressively distressing third act of Man of Steel comes to mind as an understandable comparison.

The generic action continues for what seems like an eternity, and it never tries to offer a new wrinkle to the giant-monsters-destroy-everything-in-sight subgenre.  In that respect, Rampage doesn’t provide proper payoff to anything it sets up — ultimately becoming another generic blockbuster.

Loud and explosive, Rampage offers exactly what you think it does — a bunch of CGI monsters smashing everything in sight while The Rock flexes his oily muscles and smiles for the camera.  It moves at a gleefully fast pace, leaving you no room to think about its lackluster plot.

And yet, there’s an element of schlock missing from Rampage.  It’s first two acts are weird in the best way possible, but its third act turns into a bloated, generic battle that is covered in sad greyscale.   Upon leaving the theater, you soon realize that Rampage isn’t as wonderfully stupid as it should have been.

Thanks for reading! What are your thoughts on Paterno? Comment down below!

I was going to watch this today, but changed my mind the last minute; however, after reading this, I will watch it tomorrow afternoon.

One role that I wished he never did was Baywatch. That was terrible.