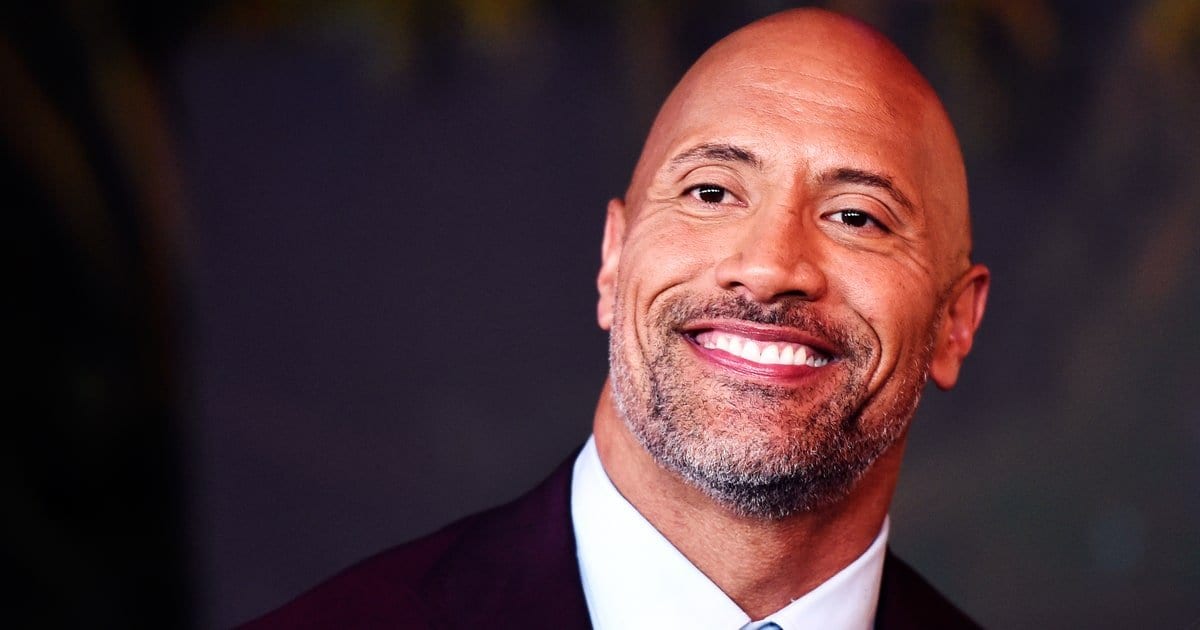 On April 13th, Dwayne “The Rock” Johnson will star in Rampage (2018), an absurd movie about giant raging gorillas who terrorize America.

Admit it: that sounds a lot like King Kong, only with a lot more gorillas and an unimaginably buff main character. But that’s not the point here.

The point is that The Rock has been putting so much into the film industry lately. In 2017 alone, he appeared in three major films, three TV series, and one video short.

Why does he do this? Because he loves us and wants to make us happy. And because he’s perfect.

I don’t know if any of you follow The Rock on Instagram, but I do and let me tell you — the man never stops going. He’s got more stamina than the Energizer Bunny. He’s always moving, making movies and leading important conference room discussions. He’s extremely dedicated to the movie industry and puts 110% effort into it just like he does in his workouts.

Speaking of which, he’s tirelessly pumping iron. How else do you think he reaches such levels of buffness without steroids? He’s in the gym almost everyday, lifting weights and making the world a better place with his muscles. He does that for us — how amazing is that?

Look! Look at the way his entire face just lights up with his smile. The charm just oozes from him. His smile doesn’t just say, “I’m happy right now.” No, it says, “I’m a really big dude but I’m really nice and I would do anything for you.”

The feeling is mutual, Mr. The Rock. Except for the fact that I’m not a really big dude. But I would do anything for you.

Despite a divorce from Dany Garcia in 2007, Dwayne Johnson is very devoted to his family. He’s currently dating Lauren Hashian, with whom he has a little girl, Jasmine (pictured below), and the couple announced in December 2017 that they’re expecting another little girl. The picture says it all. This gentle giant is unflaggingly devoted to his family. It’s adorable and only endears all his fans to him even more.

Okay, I’ll get into some more substantive reasons now. While his movies aren’t going to be winning Oscars anytime soon, he still makes quality films that are fun to watch. Some more notable films are: Journey 2: The Mysterious Island (2012), Moana (2016), Jumanji: Welcome to the Jungle (2017), and Fast & Furious 6 (2013). 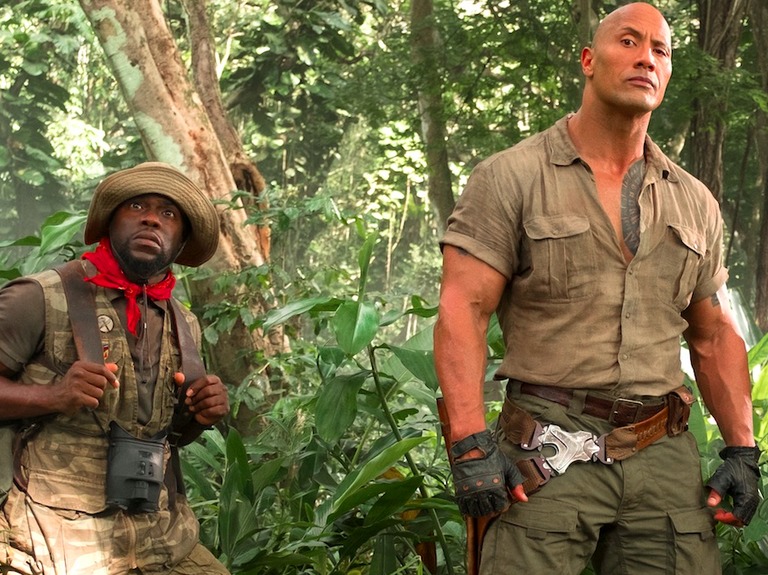 As his easy smile portrays, he is very comfortable with comedy and he does it well. Not only that, but he showed off his pipes in Moana and his prolific action-hero side in movies such as San Andreas (2015) and G.I. Joe Retaliation (2013). He’s practically a jack-of-all-trades when it comes to movies and I’m always curious to see what roles he takes on. He tends to flourish in almost all of them.

Watch out, or The Rock will hit you with The People’s Elbow or The Rock Bottom (below), neither of which will end well for you. He can even take down John Cena.

Honestly, it’s no surprise that Dwayne “The Rock” Johnson transitioned well to acting coming from the WWE. As the matches are blatantly staged and hyped beyond belief, it would make sense that someone pretending to beat the crap out of another so believably would make a great actor. And becoming a beloved actor is exactly what he did.

With a body that big, you just know he has to have a heart to match. Dwayne Johnson has created his own charity called Dwayne Johnson Rock Foundation, which helps terminally ill children and also advocates education and obesity prevention.

He also occasionally acts as a director of The Beacon Experience which encourages children to increase their education past high school. 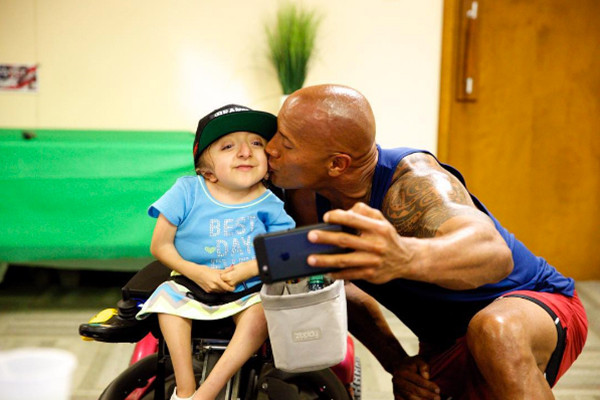 Not only that, but he has participated in and donated to charities such as the Make-a-Wish Foundation, Until There’s a Cure, the Red Cross, and the Parkinson Society Maritime Region.

Though he acts cruel and heartless in the ring, he is far from it. Despite being the highest earning movie star of 2016, he hasn’t let it get to his head.

Maybe I’m just overexcited and biased because I follow his Instagram and he’s always doing something cool, but he’s just an awesome person. He works hard in the gym and in the workplace and he knows how to play hard too. He’s genuine and puts on no airs of being better than he is. His humor is a plus to any comedy and his movies are fun to watch over and over again. He puts so much effort into everything he does just for people to enjoy, and I think that’s something to be admired in anyone.

BONUS: Here’s a meme because he also is perfect for memes, which are my second language. 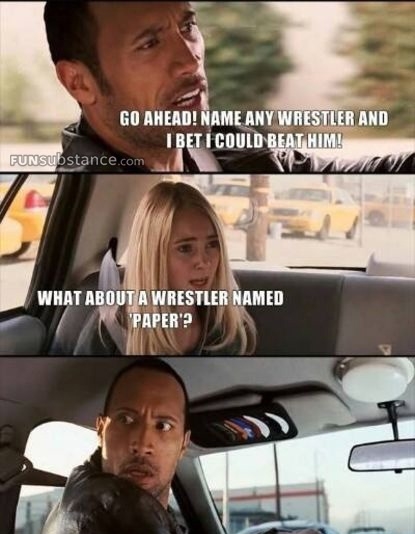 Thanks for reading! What are your thoughts on Dwayne “The Rock” Johnson? Comment down below!

Years ago I saw The Rock on the Tonight Show. He was promoting The Scorpion King, and they had him on with one of the famous film critics of the time (him I don’t remember). As the show was wrapping up, the critic said (paraphrased of course), “When they told me that I was going to be on the couch with a professional wrestler, I didn’t expect much, but the warmth, charm, and charisma just rolls off of you, and if I could offer you one piece of professional advice, it would be this: Get out of that circus before they seriously injure you, and begin your career in your true calling.” Wish I remembered who it was, because he really knew his business.

There isn’t much not to like about the man. He is an exemplary role model.

I was never really crazy about him. I could never take him seriously enough to see him as an action hero in film – I couldn’t let go of ‘The Rock’. But he’s definitely growing on me. He’s sort of this generation’s Schwarzenegger. His work ethic is to be really admired, he’s a great role model, I think.

Film Review – The Place Beyond the Pines...