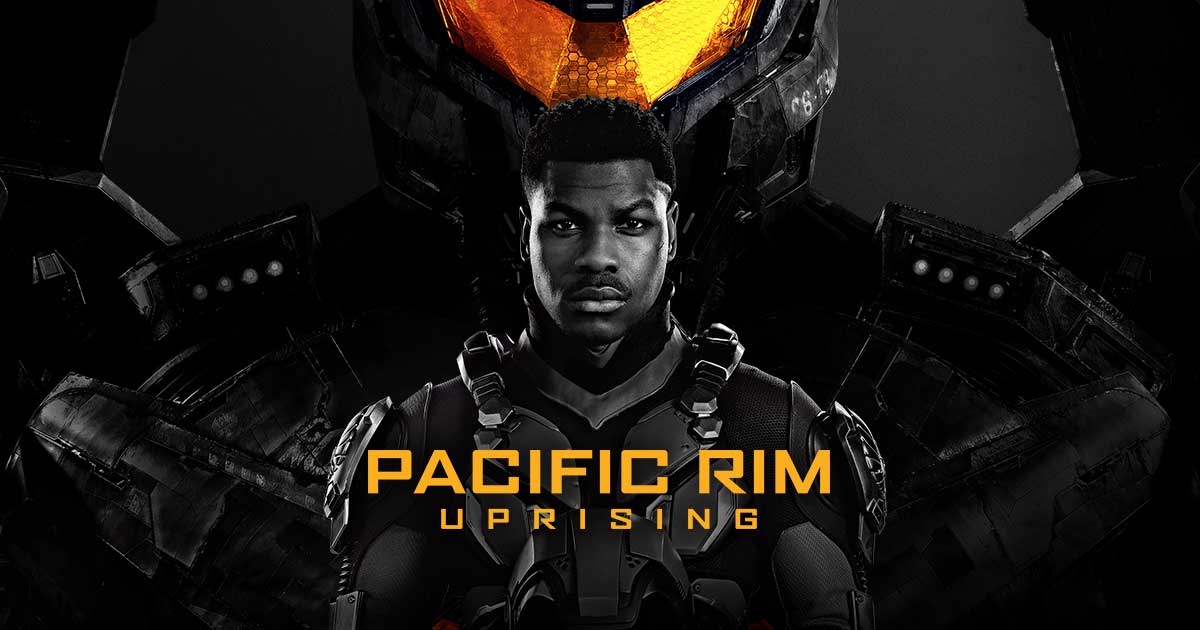 Five years after one of Guillermo Del Toro’s attempts at broad entertainment comes another installment in what is now the Pacific Rim franchise.  With a likable star in John Boyega and updated special effects, Pacific Rim: Uprising turns to what it knows best: more and more monsters–for better or worse.  The following review will be spoiler free. 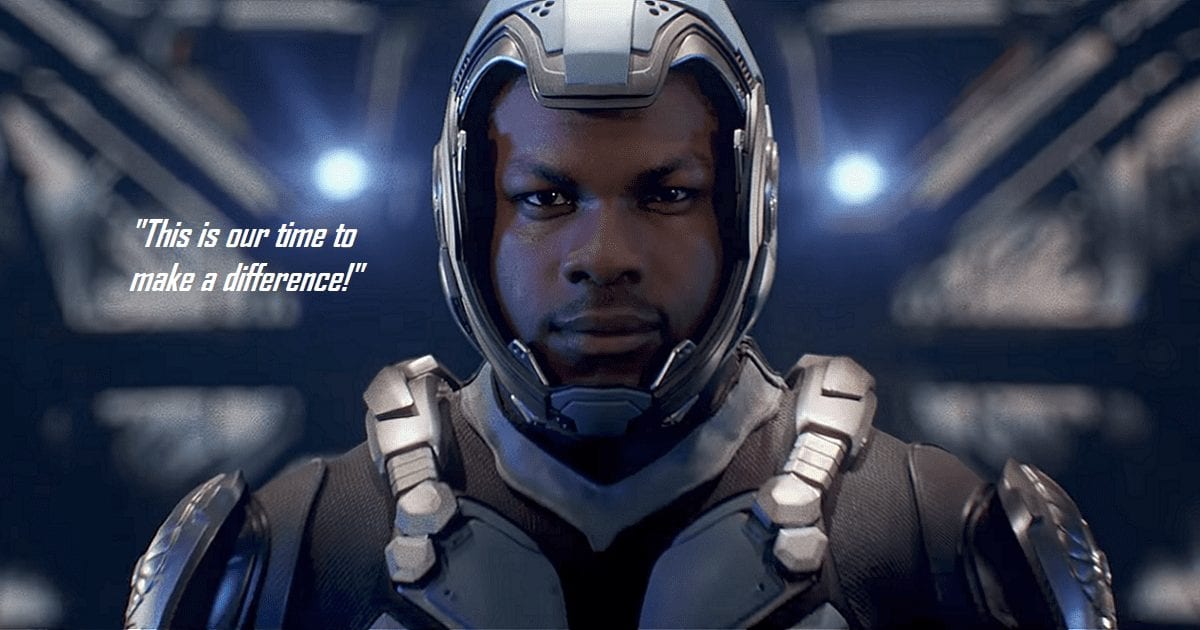 Years have passed since the last round of Jaeger pilots rid the world of the horrible Kaiju monsters.  Many individuals, including Jake Pentecost (Boyega) have turned into junkers, selling old Jaeger tech for serious cash.  But, after getting caught one too many times in restricted areas, Jake is forced to rejoin the Jaeger Academy or get sent to prison.

At the Academy, Jake unites with his old partner Nate (Eastwood) and the newest recruits, reluctantly training them for a future battle.  However, when a rogue Jaeger creates havoc in a major city, Jake and the other recruits are forced into battle much earlier than they anticipated–learning some bizarre information about Kaiju in the process.

Warner Bros. distributed the first Pacific Rim with the help of Legendary Pictures as the main financier of the project.  However, shortly after the release of the first film, Legendary struck a new deal with Universal for it to become the new distribution partner for the company.

Meanwhile, Guillermo Del Toro created a script for a sequel to his 2013 film, stating that it was due out on April 7th, 2017.  Initial reports claimed that filming was supposed to start in November of 2015, but conflicts between Universal and Legendary stalled production–and caused the production to lose Del Toro as its director.

Chinese Wanda Group saw an opportunity and took it, buying Legendary Pictures for $3.5 billion.  The sale led to increased optimism that Pacific Rim 2 would occur.  After all, the first film had crushed financially in China.

With the world’s largest private property developer pushing for the film to get produced, things began to fall into place, leading to the announcement of Steven S. DeKnight as the new director and a declaration of a new (and the current) release date.

John Boyega is Charismatic as Hell

Except for Harrison Ford, the original Star Wars cast members struggled to get out from underneath the franchise’s shadow.  Mark Hamill and Luke Skywalker are still synonymous to this day.  Luckily, John Boyega should have no problem escaping the ever-growing tentacles of Star Wars.  DeKnight allowed Boyega freedom to prance around screen as he pleased.  Sometimes, he’s clearly spinning his wheels to make an underwritten scene work, but Boyega continues to gain favor with the audience as a lovable miscreant that refuses to walk in his father’s footsteps.

Pacific Rim: Uprising is one of the most unabashedly silly movies to come to theaters in quite some time, and Boyega understands exactly what kind of movie he’s in as an actor.  He’ll spit out one-liners that work only because he’s so gosh darn charming.  Pacific Rim 2 is the first time he’s been able to use his British accent onscreen, and he uses it to use full advantage as he acts circles around everyone else.  He makes Scott Eastwood appear to have the charm of a bag of wet sand by comparison.

This man is a national treasure, and we should all appreciate him to the fullest extent.

There’s something admittedly delightful about a film that digs into just how stupid it is, but Pacific Rim: Uprising goes about ten steps too far.  We all know that no one should expect Oscar-winning drama or a tightly-wound script from a movie that has giant robots and giant monsters fighting each other.  Anyone that expects such a film is fooling themselves.

Still, Pacific Rim 2 goes so far in the other direction that it becomes nauseating.  You get the feeling that Pacific Rim 2 started with designing the set pieces then made the script around it. Scenes are cobbled together with the grace of a first-time student film, causing numerous deus ex machina moments. Many who are merely looking for giant fights on an even bigger scale will have no problem bypassing these conveniences, but others will just scratch their head in bewilderment, wondering why the script wrote itself into such problematic areas. Personally, I’m still in shock that this movie required four different writers.

Pacific Rim: Uprising combines elements together like an eight-year-old building Legos, and the logic behind every piece of it is because “bigger is always better.” That’s an actual quote from the movie itself.

This film is actively attempting to remove brain cells. In fact–most likely by design–my brain went numb to the film after a while. I can always forgive a movie for being aggressive dumb.  I say that as an avid fan of Con Air.  But, I immediately tune out when corporations throw their own agendas into the mix.  Pacific Rim‘s success in China is precisely why Uprising exists.  You know it, I know it, and the movie knows it.  The entire movie panders to foreign markets, and it couldn’t be more blatant.

This discussion is not to bash studios for making movies for international audiences.  Doing so would be such an American-elitist stance to take.  However, Pacific Rim 2 approaches its international elements as coldly as the accountant that does the tax returns for Chinese Wanda Group.  They are without thematic purpose.

The script treats non-English speaking people like dummies, carefully explaining every single detail of the plot at every moment just to make sure that everyone understands exactly what’s happening.

From casting popular Asian actresses to placing the final battle in Japan, everything is calculated.  The desire for wealth has replaced the heart that Guillermo Del Toro injected into the first film.  The original Pacific Rim isn’t a perfect movie, but at least it approached the topic with a sense of love — Uprising doesn’t have an artistic soul. 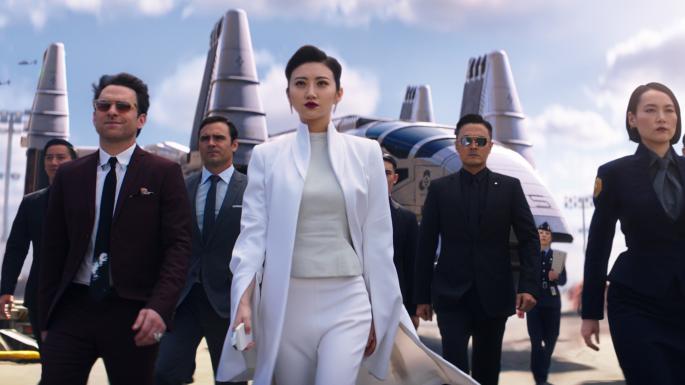 image via The Times

Pacific Rim: Uprising delivers some lower common denominator thrills, aiming for cheesy but becoming frustratingly stupid.  John Boyega is certainly a fun talent as Jake Pentecost, offering some serious charisma to lead a new generation of Jaeger pilots–of which Universal and Legendary hopes turns into a big-time franchise (the finishing scene of the film would certainly point to that desire).

And yet, Pacific Rim just can’t get out of its own way, settling for facsimiles of character arcs and serious amounts of pandering, praying that it will turn into big returns in overseas markets.  This movie isn’t for the English-speaking audiences, and it makes you painfully aware of that fact every step of the way. 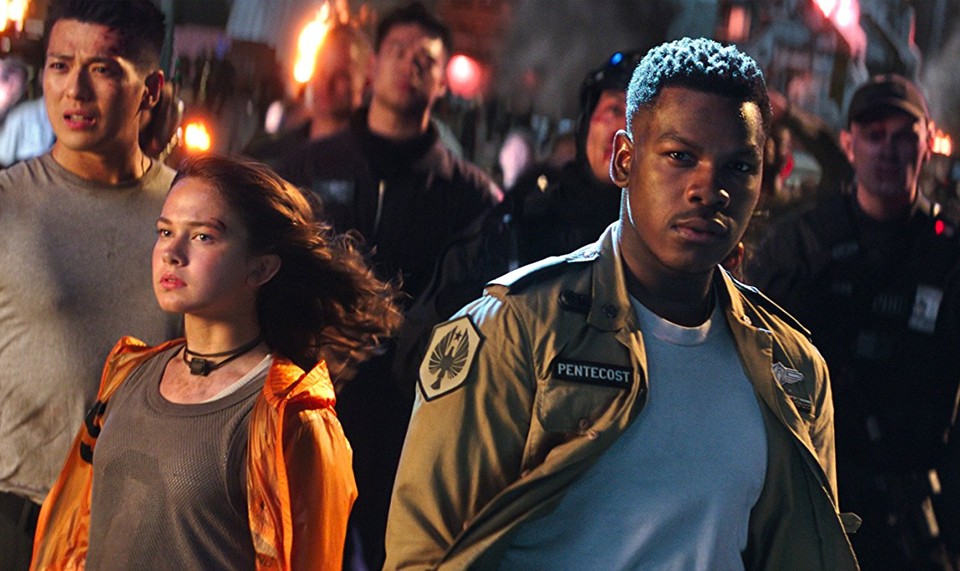 Thanks for reading!  What are your thoughts on Pacific Rim: Uprising?  Comment down below!

This is a wonderfully written review. I thought Uprising was a weird concoction insofar as it managed to retain a tiny shred of the original movie’s charm while primarily jettisoning most of its character and spirit.

You can find out more by reading my review below:

Why Disney Is Going to Break the Bank...