Although the Angelina-Jolie-led Tomb Raider films are beloved by a very select audience, Warner Bros. felt the need to update the franchise for a modern audience, ditching the more silly elements of the previous installments for a grounded look into the origin of the Lara Croft character.  With a buff star in the lead role, fans everywhere hoped that this version of Tomb Raider would finally put an end to the so-called “video game movie curse“.  The following review will be spoiler free. 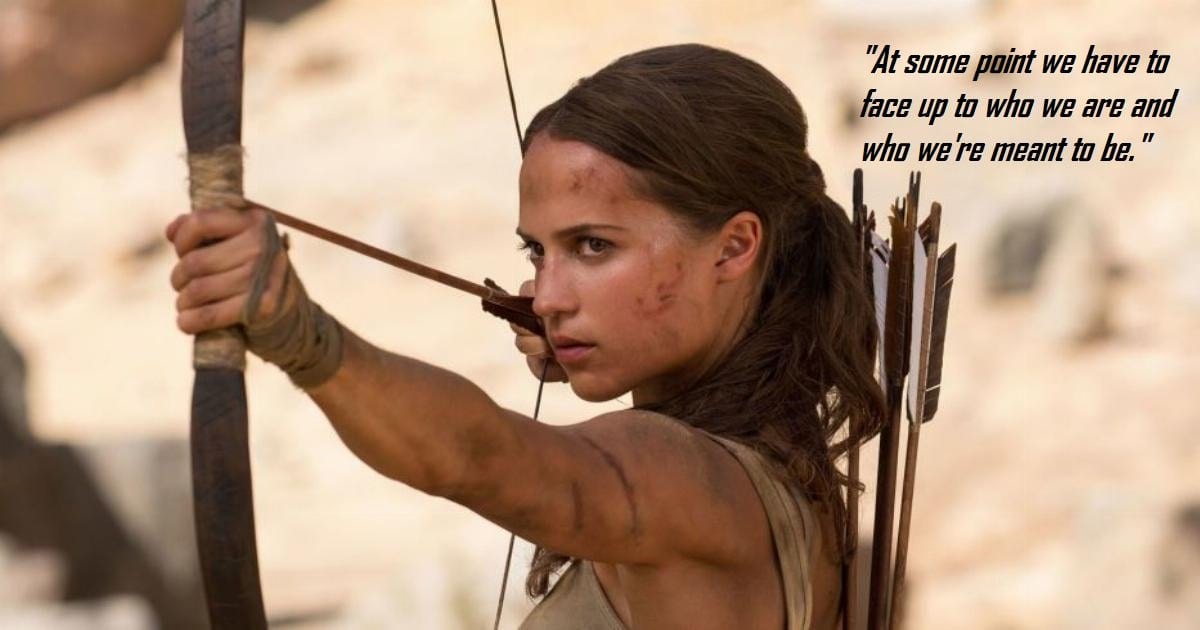 Although she struggles to pay the rent, Lara (Vikander) is still an incredibly proud woman.  Haunted by the disappearance of her father approximately seven years ago, Lara refuses to accept her father’s fortune in fear that all hope of him returning one day will be lost is she does so.

However, Lara quickly discovers a trail of clues from her father (West) left her that points towards a lost island (which is said to hold the remains of a Japanese demon that will unleash Hell on Earth).  With the help of her new friend Lu Ren (Wu), Lara travels to the island, facing a dangerous foe (Goggins) and his crew that will unleash the demon on the world if Lara doesn’t stop them.

After GK films acquired the rights to the Tomb Raider film franchise back in 2011, they’ve been working overtime in hopes of creating a new franchise that could rake in the dough for years afterwards.

The company finally got the ball rolling in 2015 when Norwegian director Roar Uthaug signed on to the project after his success directing The Wave, a catastrophe movie circulating around a tsunami that forms after an avalanche.  The film was Norway’s official submission for the Academy Award for Best Foreign Language Film but unfortunately failed to get one of five nominations.  Nevertheless, the film was a success, and it launched Uthaug’s career in the states.

As for the star of the production, Alicia Vikander signed onto the movie in April of 2016, right after she won the Oscar for Best Supporting Actress for her work in The Danish Girl.  She took to the role immediately, putting on 10-12 pounds of muscle so that she could perform all of her own stunts in the action-heavy adventure film.

Executives at GK films certainly put a new emphasis on the phrase “strike while the iron is hot” for Tomb Raider. 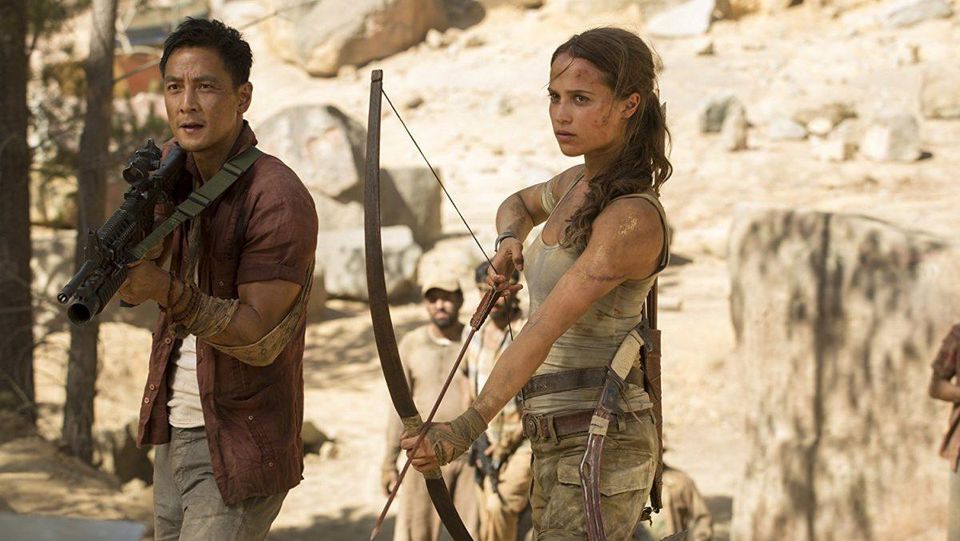 Regardless of your opinion of the movie itself, everyone should agree that Alicia Vikander’s Lara Croft is pretty spectacular.  Sporting a serious 8-pack of ab muscles, Vikander is anything but a victim or eye-candy.  She is a strong, fearless individual that won’t hesitate to put you in a headlock.

The problem with most adventure movies is that they treat their lead character like a superhero, allowing him or her to leap great distances and appear impervious to danger.  Tomb Raider definitely falls into those same traps, but Vikander’s acting as she emotes feelings of pain are enthralling.  Her grunts and screams ground the superhero action for a moment, offering a little edge to this standard action flick.  She adds a feeling of brutality to the action, slapping mud water in pain and putting all of her weight into each movement.  I might be a prisoner of the moment, but you might not see a better physical performance out of an actress this year.

2018’s Tomb Raider is without a doubt more self-serious and gritty than 2001’s Lara Croft: Tomb Raider, but Vikander adds a much-needed amount of charisma and charm for audiences to want more from the character in the future.  Vikander deserved a better movie around her, but she still makes the entire endeavor worth it.  Warner Bros. hoped that Tomb Raider would turn into their next franchise, and they definitely have the star to make that hope possible.

Roar Uthaug captures the jungle with a realistic flair.  You can feel the heat bearing down on the stars of the film, adding a layer of grime and sweat to the entire adventure.

Uthaug captures the “adventure” piece of this action-adventure film quite nicely, but it’s the “action” segment that might frustrate.  Some set pieces (such as Vikander tip-toeing across a collapsing plane near a waterfall) are very well-shot, increasing the dread and fear by the second as you feel that Vikander could fall at any second.  However, when Vikander’s Croft must fight off a few henchmen in brutal, drag-out fist fight, the camera cuts multiple times per second — sometimes without regard for the viewer’s line of sight.  The action becomes disorienting, ruining the choreography of each fight.

It’s frustrating to watch most of the hand-to-hand combat scenes.  You can see glimmers of could have been great fights.  Vikander is clearly doing all her own stunts and working her tail off to appear as a promising action star, but you get the sense that Uthaug had trouble framing each scene — leaving the viewer without a visceral impact. While there’s much fun to be had watching Lara outsmart everyone around her by solving puzzles and leading the charge against evil, Tomb Raider consistently devolves into an exhibition of how to lose believability.

Tomb Raider is so focused on proving itself as a realistic take on its source material that each derivation from such a tone is incredibly detrimental.  Items such as Lara jumping 30 feet in the air does not mix well with a realistic, self-serious tone.  Tomb Raider is in constant battle with itself.  It wants to both pay homage to the video games by showing off all of Lara’s video-game-like abilities but also work as a tenacious story of self-discovery.  Some elements of this movie are so silly that they just can’t be taken seriously, creating a disconnect with the audience when it asks them to do exactly that. You can’t have it both ways.

Tomb Raider annoys with its line of reasoning, failing to distract from a very straightforward narrative, a generic villain, and a saccharine father-daughter relationship.  Screenwriters Geneva Robertson-Dworet and Alastair Siddons betray Vikander by forcing her to act unnecessarily foolish so that future movies can occur, creating a weird, paradoxical character that outsmarts everyone to only become easily duped as the credits roll.

Die-hard fans of the franchise will find a lot to like in this newest version of Tomb Raider.  With a charismatic lead and solid production design, your trip to the theaters won’t be a total loss.

But, illogical moves and pretty standard direction keep Tomb Raider from becoming a must-see.  It’s absolutely a step up from most video game adaptations, but Tomb Raider stills struggles to form an engrossing narrative that is equal parts fun and interesting, leading to a final product that most people on Twitter will proclaim as “meh.” Thanks for reading!  What are your thoughts on Tomb Raider?  Comment down below!

[…] there’s a dude (Walton Goggins) in an orange prison jumpsuit, fighting with another guy (Mahershala Ali) he met right at that […]

I just saw this movie and you must have seen that since you’ve followed my blog. Though we’ve connected once before, I feel sure. I really liked your review though I’m not sure it’s not spoiler-free… Anyway, thank you, good work, and keep it up! I’ll definitely be seeing movies more now that I have Movie Pass. Do you bike? Where are you?

MoviePass is great! I use it myself on movies when I don’t get into screeners.

I bike every so often, there’s plenty of places in the US to do so!

Nice analysis. I clearly like it far more than you did though, since I rated it a 4/5… (https://bob-the-movie-man.com/2018/03/15/one-manns-movies-film-review-tomb-raider-2018/ ). Yes, it is fanciful with ridiculously unrealistic leaps, but its a video game flick…. and one of the best that I have ever seen. Agree with you though on the rapid fighting cuts… I saw it in 3D and thought I would be ill during the initial kickboxing scene (but thankfully it calmed down a bit).

I’ll have to check out your post as well!