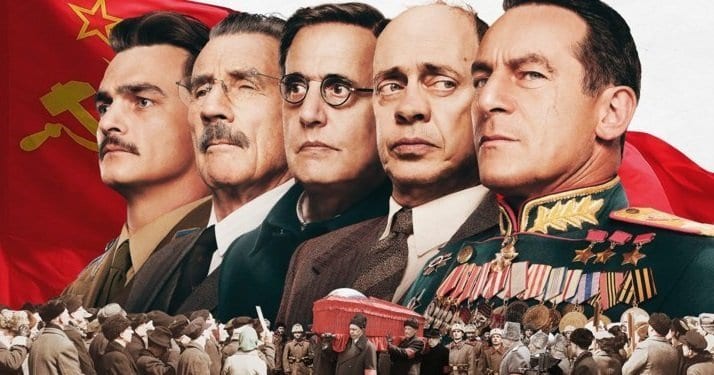 Creative minds in film always love to take jabs at political figures–both in the past and present.  Armando Iannucci, creator of HBO’s Veep, loves to satirize the political landscape, taking a magnifying glass to the system to show the ridiculousness of American politics  His latest project, The Death of Stalin, has a similar idea in mind, poking fun at Russia with striking parallels to the present.

One fateful night, the Soviet dictator Joseph Stalin unexpectedly keels over, collapsing onto the floor in his private quarters.  The members of the Central Committee quickly hear of the incident and sprint over to his office to find the dictator lying in a pool of his own urine having suffered a cerebral hemorrhage the night before.

After a nondescript amount of time, doctors pronounce Stalin dead, leaving Georgy Malenkov (Tambor) as the General Secretary of Russia.  While a system of collective leadership is established by the Central Committee, many of the members have their own ideals for what Russia should become, leading to much backstabbing and plotting…even on the day of Stalin’s funeral.

Naturally, the comedic take on the aftermath of Joseph Stalin’s death encountered backlash from Mother Russia.  The film premiered back on October 20th of last year in the United Kingdom, allowing for Russian diplomats to get an early look at the film.

Nikolai Starikov of the Russian Great Fatherland Party exclaimed that The Death of Stalin was an “unfriendly act by the British intellectual class.”  Eventually, the film’s distribution certificate was revoked in Russia, leading many theaters to get in trouble with the government when they released the film anyway (those theaters exclaimed that they didn’t receive any information regarding the film’s license).  Eventually, the movie was banned in Russia and Kyrgyzstan among others.

Armando Iannucci has stood by his film (as he should), exclaiming the following about Stalin:

“Hitler is poison. Hitler is toxic. You wouldn’t get any portraits of Hitler in any hotels in Germany, but the hotel we were staying at in Moscow had a portrait of Stalin up. He’s gotten away with it, really. We’ve quietly drawn a veil over him and not really concerned ourselves too much about him.” An Obvious Disconnect in Presentation Leads to Serious Laughter

One thing becomes painfully obvious from the first few lines of dialogue: the actors are not using Russian accents.  In fact, they’re mostly using their native accents.  Jeffrey Tambor sounds like Jeffrey Tambor, Steve Buschemi sounds like Steve Buschemi, etc.  Even the actors themselves don’t quite fit the bill of Russian politicians–Steve Buschemi isn’t exactly a doppelgänger of Nikita Khrushchev.  As Iannucci has explained himself in various interviews, he was merely looking to recreate the dynamic of the situation rather than an accurate portrayal of everyone involved, allowing for the inherent disconnect of the visual and auditory elements of the film to lend themselves to comedy–of which The Death of Stalin uses to its advantage.

The film plays into these exaggerated characters, placing them into a serious situation and taking note of their responses.  The Death of Stalin treats everything seriously, yet each character says absurd lines of dialogue.  With no reaction from the other actors, the film creates a wacky atmosphere that is only understood by watching the film.

Iannucci finds the balance between high and low brow humor, often intermixing them.  One element of a scene is crude whereas another is extremely intelligent and topical.  In that sense, there’s a little bit of comedy for people of all walks of life–even if the outward expression of dialogue is more in line with art house tastes.

The Death of Stalin Digs Deep into Political Satire

The general exterior of The Death of Stalin may appear a tad silly, but Armando Iannucci offers one of the best looks into political unrest in quite some time.  The characters handle funny situations (forcing a crowd to re-listen to a concert so that a recording for Stalin is produced effectively starts the film off with a bang), but there’s a darkness underneath it all.  If The Death of Stalin was played straight (i.e. the film was a serious drama rather than a satirical comedy), it would be one of the most depressing films of recent memory.

The Death of Stalin tackles serious issues in politics such as groupthink, the two-faced nature of cabinet members, as well as issues that arise when a change in power occurs.  The characters quickly realize that they are to fight for themselves despite idealistic views of politics that lean towards fighting for the people.  While each scene remains comical, the style mentioned above keeps the entire film grounded in a state of mild confusion as one character after another piles onto a situation.

While many would like to refrain from thinking about the current political climate both domestically and abroad, The Death of Stalin is up-to-the-minute in its themes.  Iannucci keeps the tone consistent throughout, but you get a sense that the entire movie is winking at you, subconsciously saying, “listen, we hear your complaints—we’re frustrated too.” 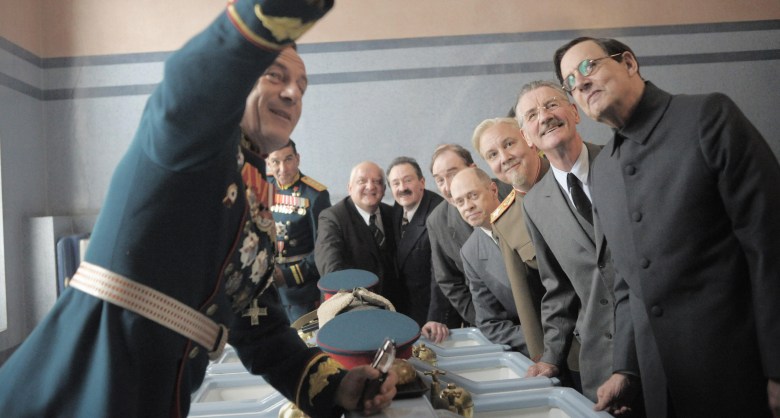 Each member of this talented cast offers noteworthy performances.  My personal pick for best standout performance goes to Jason Isaacs as a bloodthirsty, heavy-accented version of Georgy Zhukov for adding a completely different dynamic to the film the second the charade starts to become stale.  But, the real star here is Armando Iannucci.

For political satire to truly work, you must be fearless as a creative mind.  You can’t hold anything back, or else the entire exercise will have the phrase “wasted potential” attached to it for eternity.  From making light of Stalin’s death to showcasing Russia’s bizarre love affair with the tyrant, Iannucci probably shouldn’t book a trip to Russia anytime soon.  However, some of the most provocative films create great discussion, and that’s exactly what the director has done here.

The Death of Stalin takes a nihilistic view of politics, showing how these prominent historical figures couldn’t be more pointless.  As a wise man once said, “this dude has some serious balls!” 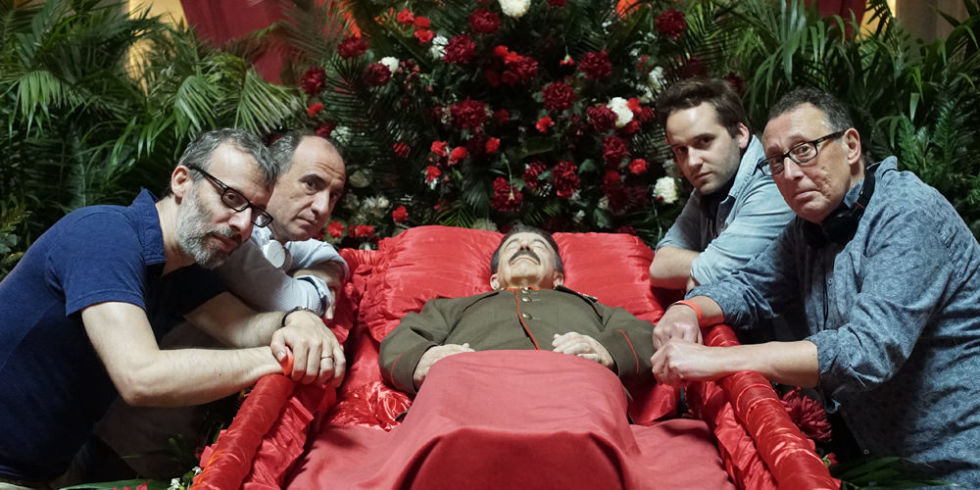 Wickedly funny and unbelievably bold, Armando Iannucci’s The Death of Stalin is some of the best political satire to grace the silver screen in recent memory.  It’s not the most historically accurate film, but it adds a strong sense of comedy to a fascinating moment in world history, highlighting the absurdity of public relations and changes in government.

Beneath The Death of Stalin‘s blasé exterior is a deep-dive into Russian politics (or all politics for that matter) and its construction, showing problems that are as timely in 2018 as they were back in 1953.

Thanks for reading!  What are your thoughts on The Death of Stalin?  Comment down below!

* The Death of Stalin quotations used in the piece are from The Guardian and Rolling Stone.

[…] in Uniform, a German film exploring lesbianism in a strict boarding school that translates into “Girls in […]