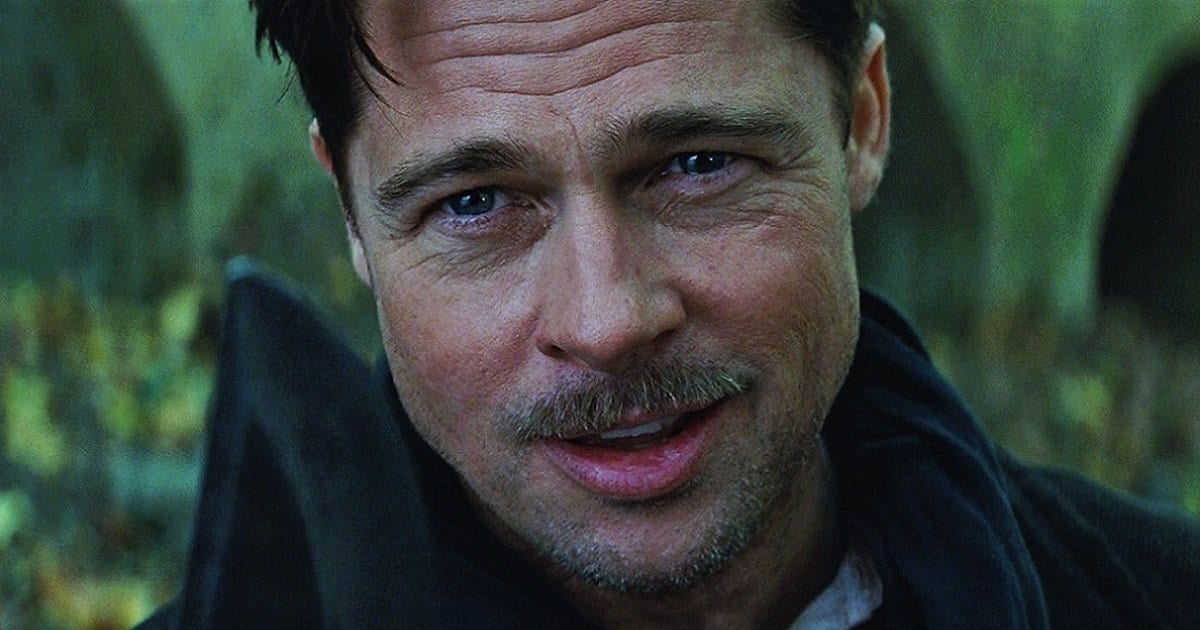 With Brad Pitt starring in several films like James Gray’s Ad Astra and Quentin Tarantino’s Once Upon a Time in Hollywood coming out on the horizon, I thought it would be a good time to go through the beloved actor’s illustrious catalog. A versatile actor and not afraid to take roles outside of his comfort zone, Brad Pitt has seemed to stay in the limelight for the better part of the last several decades, dazzling audiences with both independent movies, as well as commercial blockbusters. Here is my list for his signature roles. Edging out at the top of this list (sorry, Mickey O’ Neil advocates) is Fincher’s elegant adaptation on an F. Scott Fitzgerald short story, telling a sad tale of the titular man who ages in the reverse, while attempting to follow his love interest (Cate Blanchett) through her normal aging life. Pitt plays the character with magnanimity and curiosity, eager to feel the world and those around him, an alien to his own species. It is his bravery that brings the film to life.

Coincidentally starring Cate Blanchett as the love interest again is this ambitious piece, in which the two are supporting characters in the larger scheme of things. And yet, it is such an uncommon role for the usually headlining actor, playing a grief-stricken father and husband on vacation, struggling to find solace with his loved ones after a terrible loss. And while the action and urgency of his wife’s injuries are the superficial concern, we all know that he is crying for the inability to go through another loss. 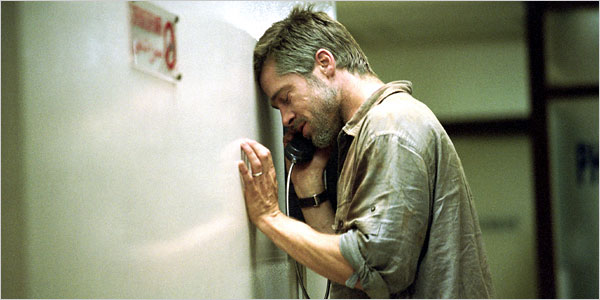 A crime drama that philosophizes about the downfall of America via 2008, all while unspooling a neo-noir yarn that includes mobs, addicts, and smoking guns. Pitt plays Jackie Cogan, a seasoned enforcer and contract killer who reluctantly plays part in the cleaning up the messes of botched capers and deals gone bad. He walks throughout the film ruggedly, with aviators, a leather jacket and a long face that says that he’s been carrying out his business in America just a little longer than he’d like. And his final lines are priceless. Who can’t help but love an out-of-place southerner who butchers his way through saying even the easiest salutations in Italian? Pitt leads a macabre pack of bloodthirsty war dogs as Lieutenant Aldo “The Apache” Raine in this sordid alternate history about the death of Hitler. The actor plays the belligerent and unsympathetic officer with the kind of recklessness that Duvall did back in Apocalypse Now, and just like the narrator suspects in that film, we know that Raine has a special light around him that’s not going to let him get even the slightest scratch. He’s just there to kill some NATzis, and we’re just there to watch. 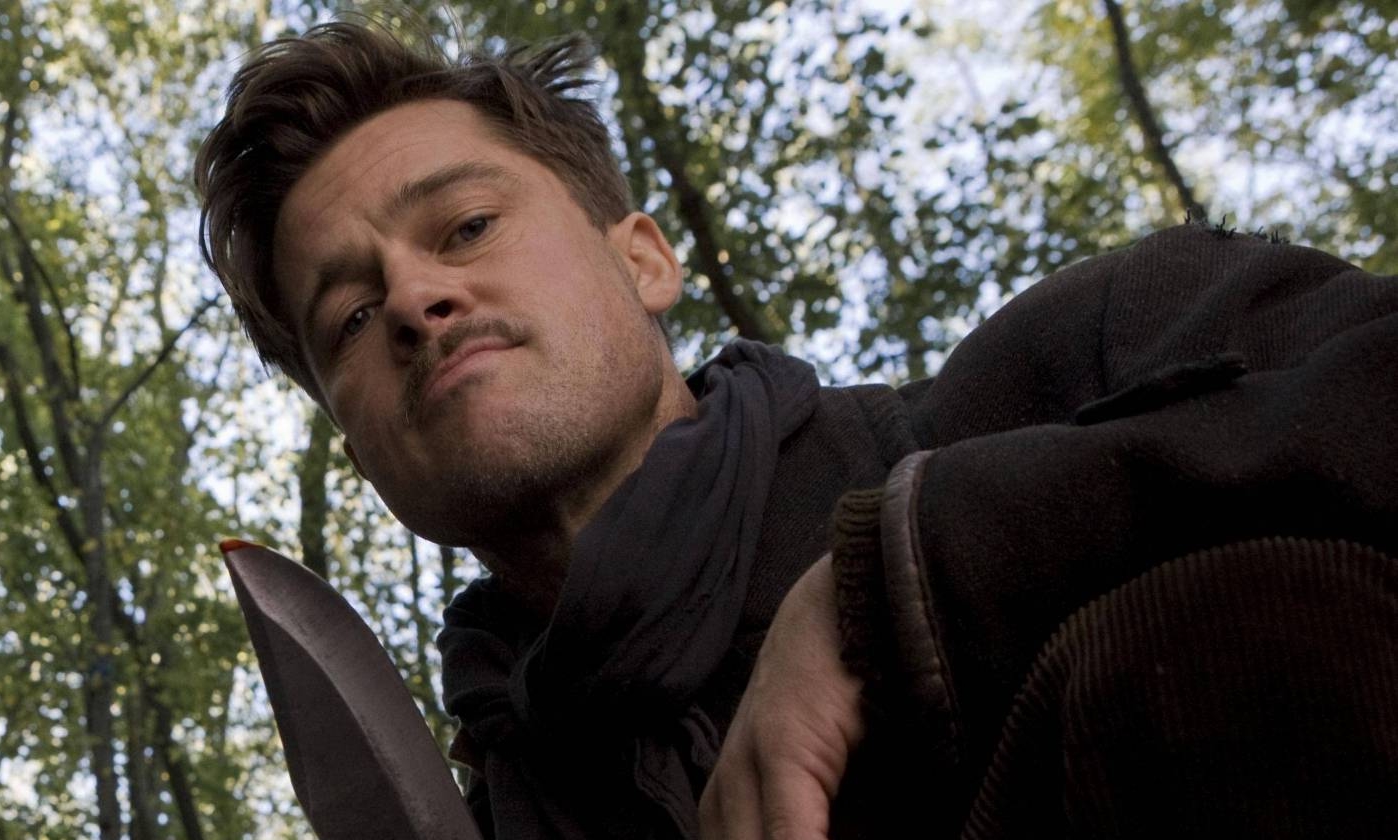 Billy Beane is the general manager of the downtrodden Oakland Athletics baseball team, and after many defeats utilizing the same tired methods for scouting out talent for years, he turns the tables, goes against the popular vote and does something different. Played with a quiet, yet burning determination by a middle-aged Pitt, the film an ponders an individual’s failures in life, and how much they are willing to sacrifice in order to correct them. 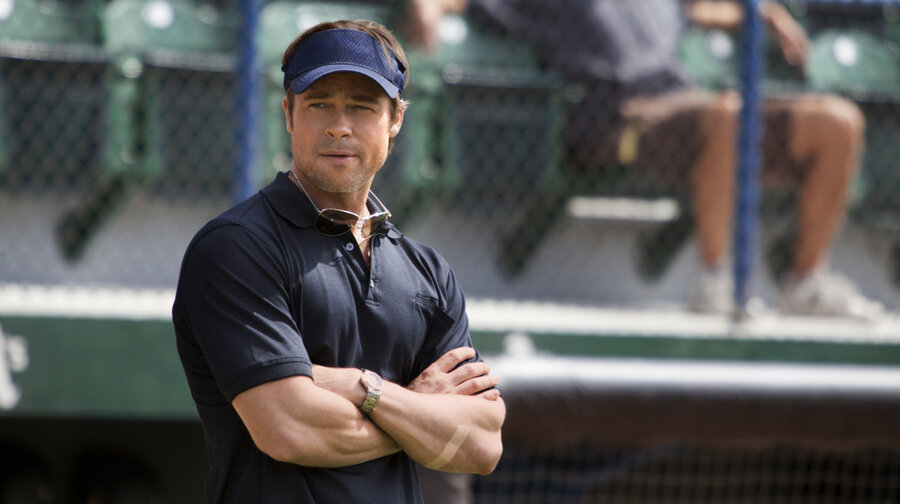 Quite a shocking film for its time and re-watching now, its grittiness could easily be mistaken for something coming out a decade later. A heavily layered whodunnit about a killing spree of ritualistic proportions, Morgan Freeman and Brad Pitt star as the lead detectives on the case. And while Freeman plays the world-weary veteran, Pitt shines as the opposite; an obdurate and passionate cop that bulldozes his way through crime scenes and locked doors with a maddening quality that shows both attributes, flaws and WHAT’S IN THE BOXXXXXX.

Pitt earned his first Oscar nod with this hyperbolic performance in Terry Gilliam’s dystopian tale of time travelling and bioterrorism. Pitt plays Jeffrey Goines, a psychotic mental patient who is also responsible for leading a faction that releases a deadly virus that disintegrates the majority of the human race. Until Bruce Willis steps up to bat. Pitt plays the character with a spasmodic and sometimes incoherent quality, as if his mind were flipping channels on television, choosing which personality they want him to behave like next. It’s a particularly craven effort.

#3: The Assassination of Jesse James by the Coward Robert Ford (2007)

Long and sorrowful, this film tests the audience with its quiet embrace.

The year is 1881. Jesse James has already garnered his reputation as a fearless and tenacious outlaw, inciting ill will into those he robs and vandalizes. But he also incites a strange jealousy in a select few, including Robert Ford, who asks himself the same question that James asks: do you want to be like me or do you want to BE me? Pitt plays the role exhausted and blasé, showing James as someone who knows his glory days are behind and that his day of reckoning is near. A sort of anti-western film, Pitt plays one of the last symbols of the outlawed West with haunted virtuosity.

One of the most talked about characters in the history of film, Tyler Durden is a role that Brad Pitt fully embraced, learning from it as it enacted it. A genre bender about spiritually starved men arriving on the doorstep of the new millennium, our nameless, emaciated hero (Edward Norton) develops a strange relationship with the charismatic Durden, who spends his time cutting clips of pornography into family-friendly films, pissing in people’s food, making soap out of rendered fat from liposuction clinics, and, oh yeah, plotting the mass destruction of credit histories and, thereby, consumer culture. Brad is bulky and bronze, filling out that stupid red leather and those stupid sun glasses like it’s, well, 1999. Angst-ridden and self-referential, Pitt lurks through the darker corners of his psyche to make sure he is not your khakis. 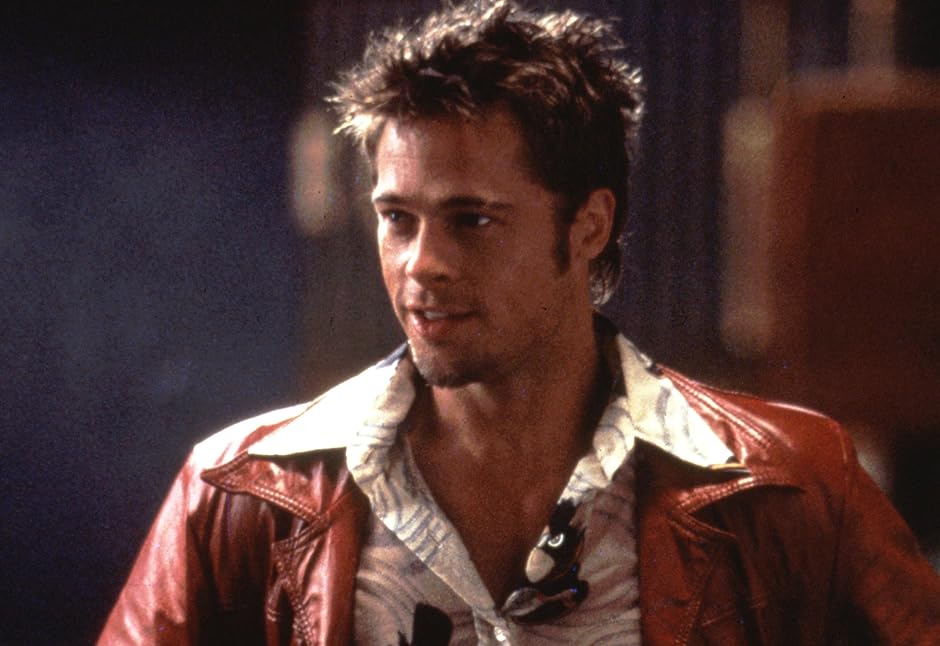 Okay, so I know I’m going against the grain with this as my number one, and foresee some backlash to come with it. But it has to be, because I think this is the quintessential Brad Pitt movie. So, he isn’t the main character in the film. And it’s not the most celebrated in the Coen’s brothers’ catalog. But it should be one of them. Pitt is wildly entertaining in this black comedy about a CIA analyst who loses a disc with classified information in the wrong hands of Chad Feldheimer, a bumbling, doe-eyed personal trainer at a gym in Washington D.C. The actor plays Chad with such stupidity and clumsiness that every scene with him is pure hilarity.

If Brad Pitt weren’t famous, I could totally see a guy looking like him being an aimless jock body, who is about as interested with the outside world as much as a mouse is while running on their wheel. His comic timing is impeccable, the way he is always in his biking gear, his out of style frosted highlights, and the banal way he sucks on his water bottle. It’s an unforgettable performance in a highly underrated movie. 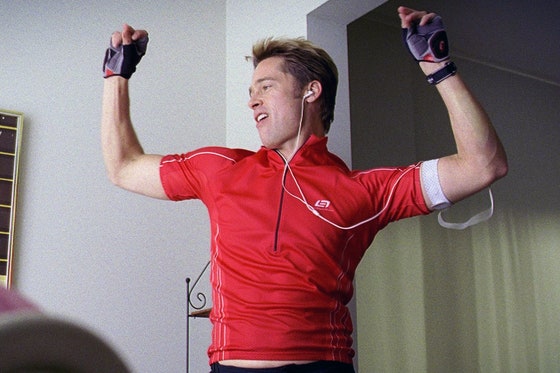 Thank you for reading! What are your thoughts on this list of Brad Pitt films? Do you think we missed any? Comment down below!

[…] his work on The Social Network, Moneyball, and Steve Jobs, all of these were based on real events, but he did slightly change a few things […]

Brad performance in Burn After Reading just like True Romance are fun. But Burn should not be at number one on this list. Frankly I’d take Burn off the list and put at number 10 Kalifornia.

Perhaps not his best acting, but the most entertaining role he’s had is being shot at by his wife! 😂

Ha! I figured that it would stir the pot a bit! But I also think it’s a performance that truly exercises his potential as a comedian. This movie wouldn’t be the same without him. I’ve watched that car scene with him and John Malkovich at least 20 times. Has me on the floor every time.

oh man! i was getting ready to post a comment mentioning burn after reading as an underrated role of his and then i saw it at number 1!! pleasantly surprised! he was absolutely hilarious in that movie. he’s gotta do more comedies. great list!

Love this list! I was obsessed with Brad Pitt during my teen years and as an adult I think he’s been fun to watch. I love the mix of characters he’s taken on. He has definitely proved he’s more than just a pretty face. I’m shocked that there’s a few movies I didn’t know about. I’ll have to check them out!

One of my favs- small, but oh so memorable role in Thelma and Louise. 😍

Right? He can be so versatile. Thelma and Louise was the first film that really got him some recognition.

I agree completely! Thanks for sharing this list. I’ll have to watch the ones I haven’t heard of and maybe revisit some. 😊

I cannot agree more with you. I am disappointed to find that Kalifornia is only an “honourable mention” here. Brad Pitt was best there he has ever been or was since. He is a very overrated actor overall. A lot of star looks, but little great acting to substantiate it all. It is easier to compile his “worst performances” ever and “Meet Joe Black” will be somewhere there at the top.

Burn After Reading is down there with my least favorite Coen’s movies but I did Brad’s performance! Great list, as well!

True, the film isn’t as good as Fargo or No Country for Old Men. We shouldn’t write it off completely, though!

Kalifornia is a great 90s flick. Very grizzly. Pitt is simultaneously stupid and sinister. Definitely shows him in a different light than we’re used to.