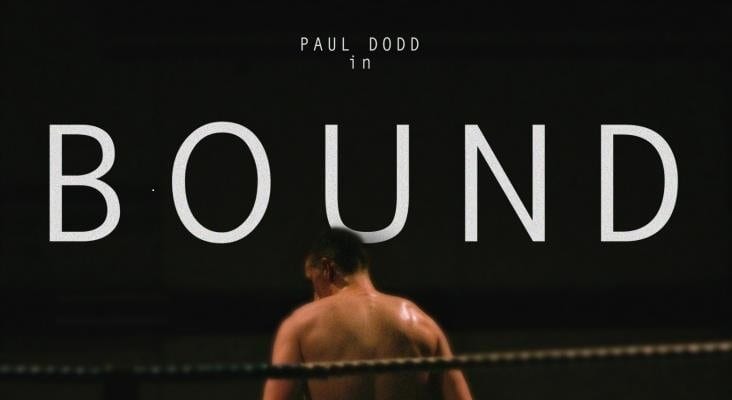 Short film is often a proving ground for aspiring filmmakers to show their skills and move into other projects.  While the team behind Bound has already gone on to create other works of art, it’s always nice to return to a film that acted as a stepping stone, while also proving that solid work can pay dividends.  The following review will be spoiler free.

Still grieving the loss of his brother, a young, amateur boxer (Dodd) is down on his luck.  Without a job and a concrete feeling of purpose in life, he works to maintain a relationship with his ailing father by helping him in his daily activities.  Although boxing might be the last thing on his mind, his unethical coach works to keep him in the ring by any means necessary.

Bound is a perfect example of making a film with serious financial constraints.  In fact, Gerard Walsh and the rest of the creative team didn’t even have a working budget for the film.

Starting out in the film industry can be a perilous predicament.  With no references, creative minds are left to build their own persona through quality work that is done mostly on their own time with their own money.  However, serious constraints can cause creativity, and the makers of Bound brought that idea to life.

Paul Dodd (the main actor in the film) is also a personal trainer.  Rather than spend time training an actor to box, Walsh was able to film complicated action sequences with a highly trained central figure.  Elements like this one are key to making poignant, memorable films — while keeping costs down.

There’s an element of many short films that I like to call “student film syndrome.”  Many aspiring filmmakers will focus on the atmosphere of the film, assigning arbitrary feelings of empty symbolism through faux scenery.  In essence, their efforts amount to zero impact on the viewer with a strong sense of pretentiousness.

Thankfully, Bound doesn’t succumb to this plague.  Bound is certainly atmospheric in nature, but each piece of imagery adds to the character’s journey.  To put it bluntly, there is an undeniable purpose to each scene — even if a particular scene is just a training sequence.  Each sequence dives into the psyche of the boxer as he struggles to find his own purpose, making the film a worthwhile experience.

Gerard Walsh deserves a serious amount of praise for his direction of Bound.  This short film isn’t just shot, it is crafted.  Walsh keeps the camera back and shoots the boxing sequences with limited takes, allowing for a visceral impact to take over.  From the first training sequence that is filmed in one glorious shot, it’s clear that Bound has higher pursuits than being claimed as “adequate.”

Bound Digs Into its Irish Roots with Gritty Realism

Set in Dublin, Ireland, there’s a distinct Irish feel to Bound that is always present.  From the environment, to the score, to the thick accents that will force you to pay close attention, Bound works hard to capture the blue-collar nature of its star and the surroundings.  As I alluded to in the previous section, it’s incredibly difficult to make the atmosphere of a film feel genuine and enthralling.  But, Bound is so distinct in its vision and execution that it almost begs you to notice it.  That feature speaks not only to the vision of the director as I mentioned previously, but also to very solid writing that puts everything in perspective.

Nothing quite goes right for our main character.  He’s brash, and even a tad impulsive.  However, there’s something incredibly vulnerable about him.  Boxing is a great sport to use in film in that the emotion of the character is visible with the force behind each punch.  As the boxer’s life spirals, each punch is just a little harder than the last.  With great sound design added to the equation, that feeling is accentuated even further in Bound.

Bound Doesn’t Quite Add a New Spin on the Genre

There is definitely a sense of “been there, done that” as you watch Bound, however.  You have a down-on-his-luck boxer,  an ailing loved one, a death of someone close, and even an unscrupulous coach.  You’ve seen this story before in either feature-length form or another short film.  There’s certainly an attempt for Bound to not be a complete slave to the formula as it winds to a close, but that feeling of excessive comfort is always in the back of your mind.

It’s difficult for a short film to become wholly original in such a short period of time — making it that much more important for the premise to have a clever twist from the beginning to separate the film from the pack.  Bound is too well-made to cast aside, but these issues keep it from becoming something transcendent.

Bound isn’t a perfect film, but it’s an obvious display of blooming talent that is bound to grow (pun intended) with a stronger financial backing.  The film oozes with style, providing a sense of atmosphere and professionalism that is lost in most short films.  It’s clear that everyone involved had a clear artistic vision, elevating Bound beyond a cliche-riddled boxing film into something much more personal — and vulnerable.

Check out the full film on writer Shane Coules’ website.

To keep up with the crew behind Bound, check out some of their latest works:

-Gerard Walsh’s first feature-length film A Day Like Today on Vimeo On Demand.

Thanks for reading!  What are your thoughts on Bound?  Comment down below!

I have a question in regards to short films. Where can I watch them? I usually watch the Film School Shorts on PBS but what about the others such as the ones nominated during Oscars season?

I know that they release all the shorts into theaters as one event after they’re nominated! Check to see if your local theater is showing it!