'Newsies' is basically a movie for theater kids who have grown up. 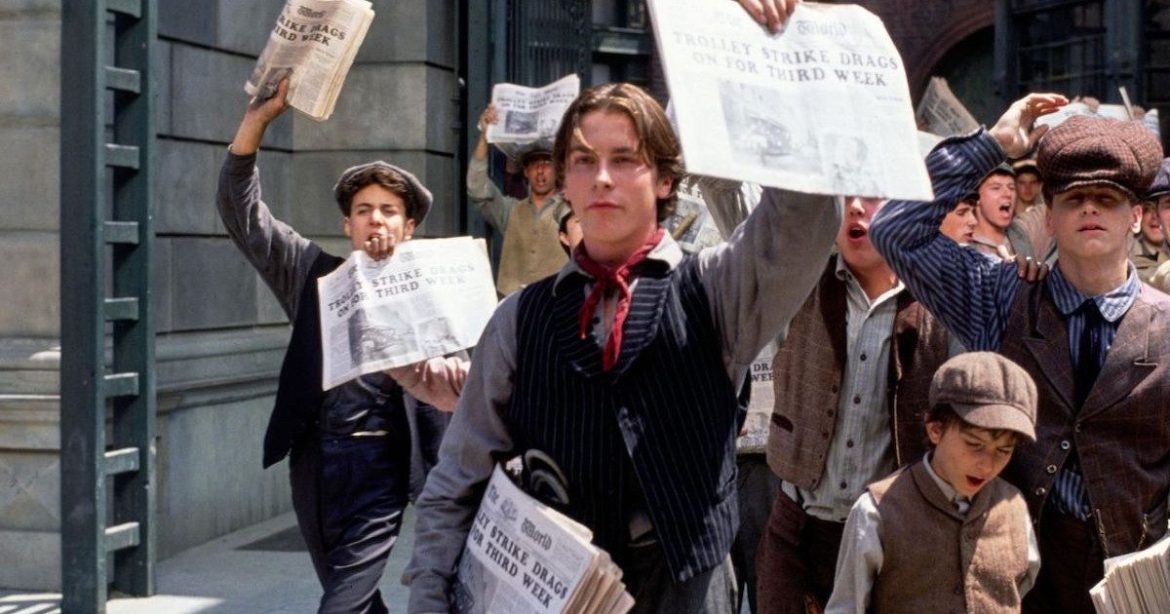 I refuse to watch the Broadway musical Newsies because I have a strong loyalty to the 1992 Disney film version of the production starring Christian Bale. Why do I love it so much? The numbers are catchy, the setting is nostalgic, and the plot is riveting.

But I love it most because it’s a theater kid’s wet dream. Every high school theater kid dreams of being in a big production of a musical where they can show off their skills. With the right mix of edgy, spontaneity, heart, and the fun of a musical, Newsies is the pitch-perfect movie for theater kids.

Even in the characters and actors themselves, you can see the common stereotypical theater kids that frequented the school auditorium:

Played by Max Casella, “Racetrack” Higgins is the edgy role that every aspiring thespian wanted. He isn’t the main character, but he’s memorable, and that’s all that matters. Some of his role involved narration, which allowed the actor to show off their best New York accent, to the delight of the audience. He also had some good jokes throughout the film. Racetrack definitely ended up being the most beloved character of Newsies.

David Jacobs is the role that went to that one kid who was really passionate about theater. He put his all into every line and every song and his performance generates rave reviews. The technique and professionalism injected into the role are astounding and it’s obvious that the actor is destined for a bright future. They travel to LA or to New York, hoping to catch their big break and ride that high school high. Unfortunately, show business is a hard industry to break into and they end up moving back home and working for a local insurance company. But hey, they were good in Newsies, weren’t they?

Les Jacobs is the role that should have gone to a freshman but no freshman auditioned so it was given to the director’s elementary son instead. They are surprisingly good, which is probably a result of the theater blood in them. The audience is enamored with them and loves their adorable delivery and mannerisms. The rest of the Newsies adopt him as a little brother and he ends up having the best time during the production. He gets the biggest applause at the end of the night.

Sarah Jacobs is the role that the most talented actress in the school will get. She barely gets any lines and she’s only there to fill in the plot and to be a love interest. Her talent is basically wasted on this role. Her role is overshadowed by the many other male roles and most people forget she is even in it. This will basically doom her musical theater career and she’ll end up going to college to be an engineer instead.

This is the part that goes to a beloved alumnus. Every time they’re on screen, the audience goes wild. Their performance is one to be applauded, but definitely not the best of their career. The whole thing feels more like a cameo on a sitcom than an actual role, but still fun to watch. He gives unsolicited acting advice to the rest of the cast during rehearsal.

The school’s version of Troy Bolton was sentenced to help the drama club with their production. The principal bribed the director into giving him the lead part of Jack Kelly, hoping it would rehabilitate him. He definitely didn’t give his all in this, but it was entertaining nonetheless and he did a good job for how little musical theater training he had. His ego and overall easygoing manner leaked into his performance to give it an air of realism. There’s at least one theater kid who hates him for it though, as they had been dreaming of this role for years.

Thank you for reading! What are your thoughts on Newsies? Comment down below!